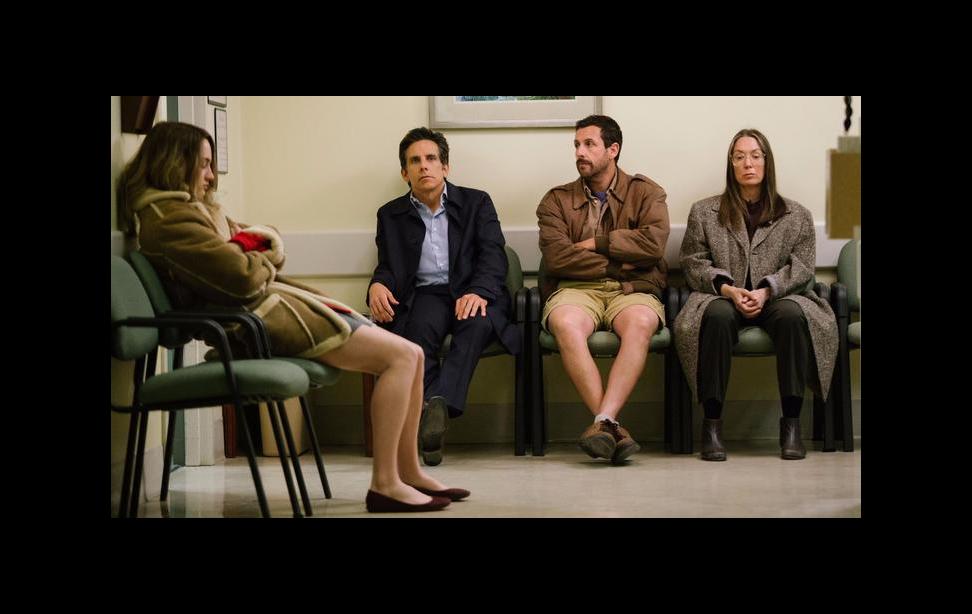 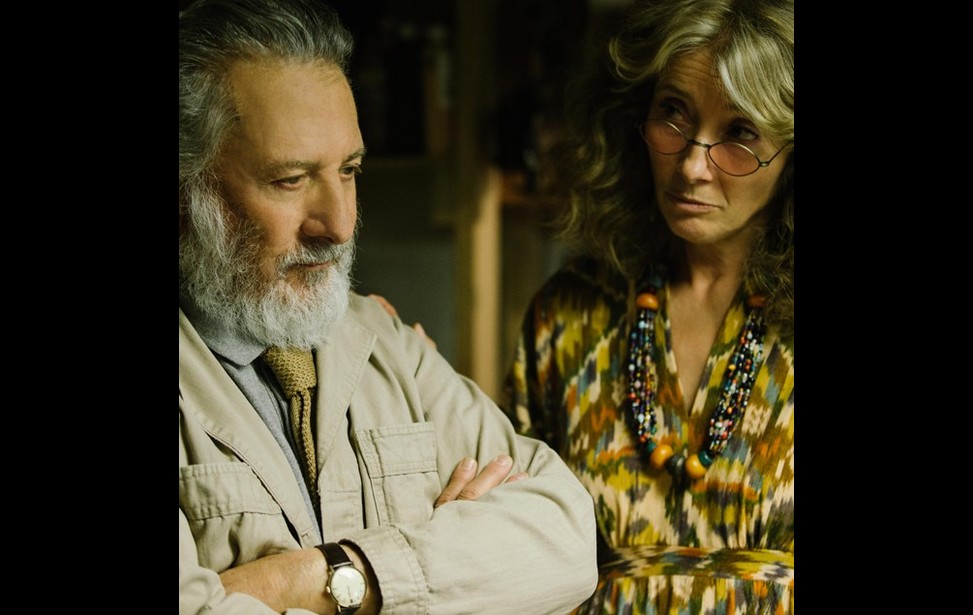 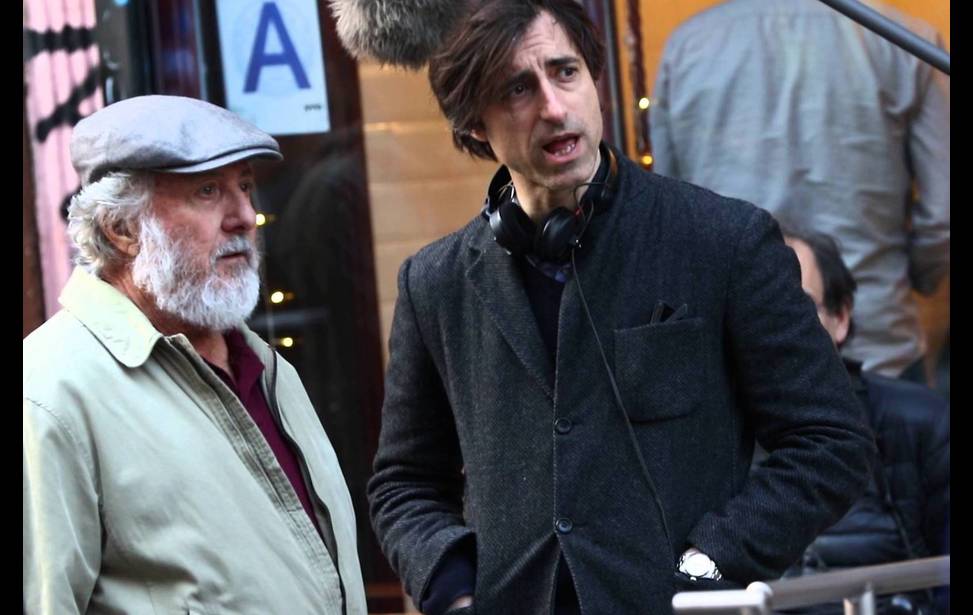 Does anyone in your family listen? The folks in The Meyerowitz Stories (New and Selected) sure don’t. And they’re not the only ones to switch off. The scene cuts often stop them at mid-sentence, inviting bemused viewers to absorb the jolt. In his winning new picture, director Noah Baumbach elevates rudeness to an art with the aid of sharp dialogue and edits.

The household he surveys contains Millennials and aging Gen-Xers along with Dustin Hoffman’s 70-something patriarch. From here it’s a pitch-perfect crunching of clan history and its lingering effects. Baumbach has explored similar turf in his domestic samplers The Squid and the Whale—which he considers the seed of The Meyerowitz Stories--and Margot at the Wedding. This latest effort puts over a more sobering portrait of dysfunction than his springier films Greenberg, Frances Ha, While We’re Young and Mistress America. There are liberal sprinklings of humor, but the meat of the picture is the psychological warfare waged by family members and how battle scars can remain long after the combattants exit the trenches.

Adam Sandler plays Harold Meyerowitz’s (Hoffman) oldest son Danny, an unlaunched musician who failed to win dad’s attention and now practices his own brand of snubs. His sister Jean (Elizabeth Marvel) is a canny combo of mousey and bossy; and their half-brother Matthew (Ben Stiller), long the apple of Harold’s eye, makes a killing, yet seems just as down on his luck. Then there’s old Meyerowitz’s chronically tipsy current wife Maureen (Emma Thompson), and a former one, Matt’s regret-filled mom (Candice Bergen). That leaves Eliza (Grace Van Patten), Danny’s aspiring cineaste daughter and last shot at redemption. And, of course, Bruno the dog.

How each Meyerowitz reckons with their successes and failures and the power prerogatives these confer drives much of the plot. Or shall we say plots?—since the film’s titular stories unfold in chapters, like an anthology. Why else tack “New and Selected” after the main title? As Baumbach noted during a press conference at the 55th New York Film Festival, he imagined the film “like a collection of stories that an author may have published separately and that were collected and put together.” Yet the indie filmmaker was quick to clarify that he planned the composite narrative “as a complete meal.”

Still, about that compendium idea, he shared a bit of backstory: “I was thinking of authors who returned to the same family over time. There’s a John Updike collection of the Maples family, which I found very affecting, and the early stories were them when they’re younger; then they get married and they have a family; and then later stories have them beaking up.” The filmmaker recalled being deeply moved that “these stories existed in real time and weren’t pre-ordained.” He conceded, “There was something very sad to me that (Updike) arrived at these conclusions for these people that he didn’t necessarily have when he published the first story years before.”

The stage at which we catch Harold finds him obsessing over his legacy. Not since the Whitney Museum acquired one of his works has the sculptor and retired Bard professor had any real glory to speak of. That was decades ago, and no one even knows where the thing is. Now an artist friend of some renown (Judd Hirsch) is getting a career retrospective at MoMA, and self-important Harold begrudges that his own creations only languish in the Meyerowitz’s New York townhouse. If only Harold’s art were as perfected as his narcissism! As it happens, he and personal-wealth expert Matthew set in motion a plan to sell the real estate, the ouvre and, to Danny’s mind, the safe haven of home.

Which takes us back to the issue of not listening and how the edits fit in. For Baumbach, the device of interrupting characters while they’re talking was “an emotional decision” baked into the script. Inspired by such editing tricks as irises, fadeouts and dissolves, he designed the abrupt fades to suggest the equivalent of characters talking past each other. His idea, implemented together with editor Jennifer Lame, was virtually “to close out.” Acknowledging his debt to Stanley Kubrick, he explained, “I did (the fades) close to the action in the way that I cut off people, so that you wouldn’t hold with the scene and then it would fade; it would fade almost as the scene’s still going.” The jumps may strike us as hilarious, but Baumbach was going for a deeper impact. “It’s like something goes into your throat or into your heart in a way. Something just envelopes.”

For the final chapter of The Meyerowitz Stories, the filmmakers tweaked the visual syntax to give it a different style of jump. That’s because Baumbach considered the end “almost like the new short story put on the collection.” He speculated, “Maybe the author is older and trying a new technique.”

2) (L-R) Dustin Hoffman as Harold Meyerowitz and Emma Thompson as Maureen in “The Meyerowitz Stories.” Photo courtesy of Netflix.

3) (L-R) Actor Dustin Hoffman and director Noah Baumbach on the set of “The Meyerowitz Stories.” Photo courtesy of Netflix.