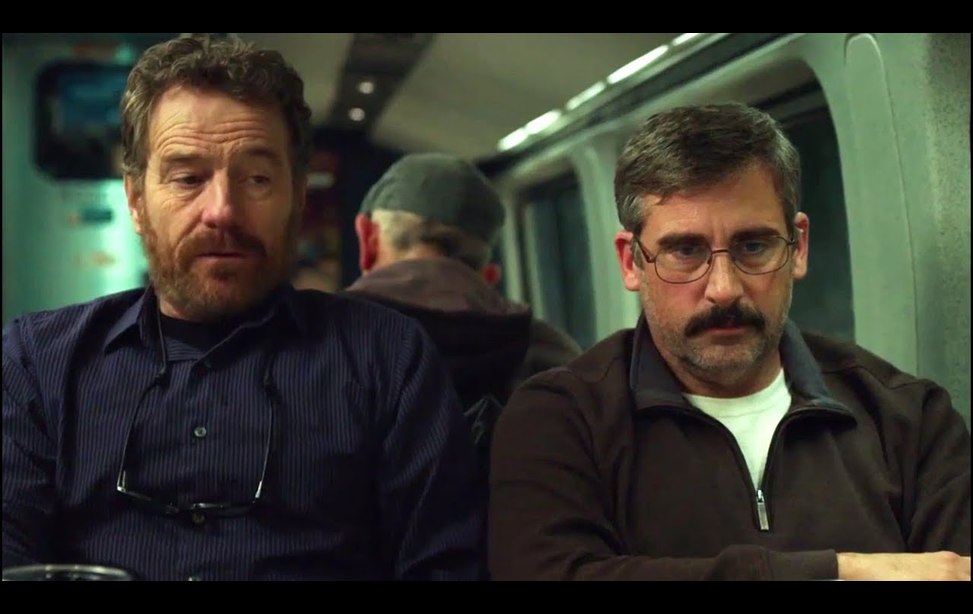 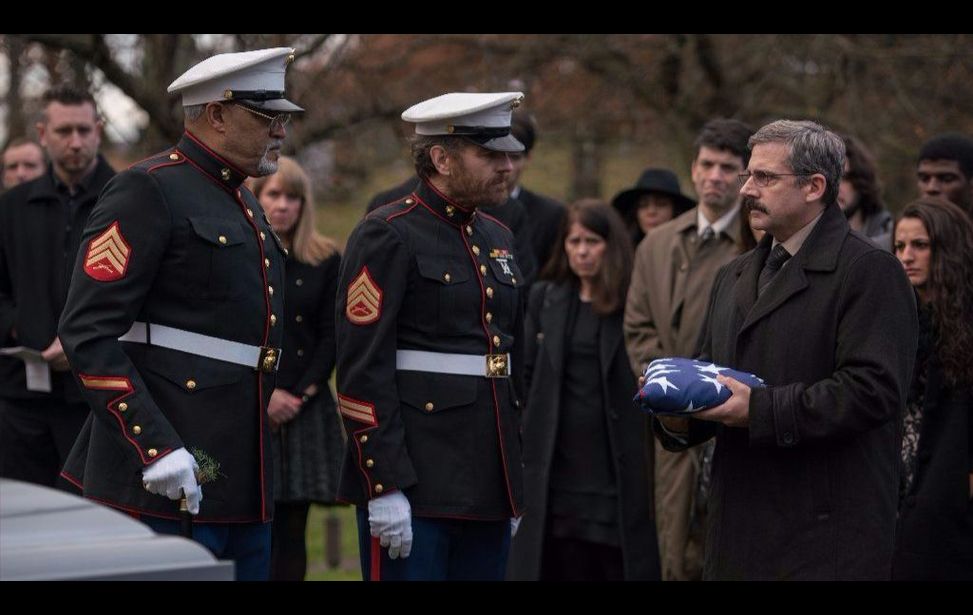 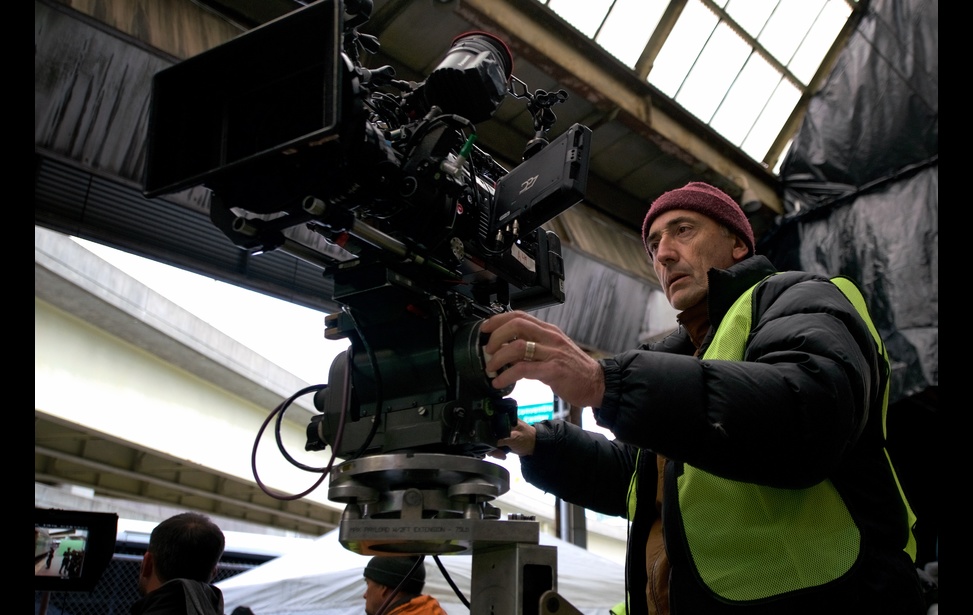 What is manhood? How are men to act in the world, and where do truth and responsibility fit in? Having studied boyhood in depth, now director Richard Linklater tracks the next phase of masculinity in his new film Last Flag Flying.

To help visualize the maturation arc, he once again tapped cinematographer Shane F. Kelly. They both like progressions. Their previous collaboration Everybody Wants Some!! was billed as a follow up to Linklater’s Dazed and Confused, and Boyhood—which Kelly served as camera operator before stepping in as Director of Photography for the last four years of the shoot--serialized a coming of age all in one work.

Just don’t call Last Flag Flying a sequel. Though it may seem a part two of Hal Ashby’s The Last Detail, “this is a movie that stands on its own,” Kelly tells thalo.com in a recent phone chat. “It has three characters and they’re from the military,” but that’s about the height of it,” he asserts.

The mix-up is understandable. Like the 1973 film co-starring Jack Nicholson, Otis Young and Randy Quaid, it too is based on a Darryl Ponicsan novel about three Vietnam anti-heroes, only the source material here is the successor volume, set 30 years later. That’s about how long 51-year-old Kelly has lived in the U.S. since leaving the U.K, so when it came to imagining a three-decade gap, he had his own memory album to draw on.

The North Ireland native recalls reading the script and wondering, “What was an incident 30 years ago that defined my life, and how would things have been different had I made a different decision?” For instance, he could have stayed in London, where he relocated in 1988 after graduating from the University of Ulster and where he worked as a PA for commercial companies before becoming an editor and shooter. Instead, he struck out for Seattle during the grunge-fueled ‘90s and subsequently spent five years in Los Angeles. But it was moving to Austin in 2001 that he considers his rendezvous with destiny. That’s where he met Linklater and ended up shooting his 2006 sci-fi animation A Scanner Darkly.

So when Kelly notes, “Rick’s movies always deal with the passage of time and the decisions that you make and don’t make,” it’s easy to grasp the personal resonance. Kelly recalls inhaling the script of Last Flag Flying in one entranced sitting. It was love at first read. “I’d always wanted to do a dark movie, like walking off the edge without falling off.”

The film opens in a Norfolk bar-and-grill that owner Sal Nealon (Bryan Cranston) has let go to seed. Now in his 60s, the former Marine spends his days cracking wise about human stupidity with his meager clientele. At first he doesn’t recognize the low-key stranger who sits down at his bar, but once former Navy Corpsman Larry “Doc” Shepherd (Steve Carell) gives his name, Sal receives him with open arms.

The last they’d seen each other, young Doc was headed to military prison in Portsmouth, New Hampshire, and Sal was one of two Nam-era officers detailed to escort him up from Norfolk. The second officer, hellraiser-turned-Reverend Richard Mueller (Laurence Fishburne), now preaches at a backroad Baptist church, which is just where Sal takes his unsuspecting guest. Whatever bonhomie the reunion stirs up gains a knottier texture when Doc announces the purpose of his visit: His son has been killed in Iraq, and he wants his fellow servicemen to help bury him in Arlington Cemetery.

The band of brothers set out to retrace their ‘80s route with baggage left over from their military days--Sal with a metal plate in his head; Mueller with a cane and Doc with the lingering shame of his Bad Conduct Discharge, or BCD. (As the ex-con dubiously quips, the abbreviation also goes for his “Better Career Decision” of staying on as stocking clerk at the Portsmouth Navy exchange.)

Once in Arlington Doc discovers that the brass lied about the circumstances of his son’s death, and he decides to transport the casket to Portsmouth. So it’s on to the next leg of the journey, with a mission that echoes the bleakness of the one so many years back, yet which once again finds cracks of light along the way.

The casket virtually never leaves the frame from the moment it appears. For Kelly, it’s the crux of the story. “Even when they characters are in the train, death is in the back in the box car. That’s part of the weight on Steve’s shoulders.”

“How do you show somebody who’s lost in the landscape and has had a lot of bad luck in his life?” Kelly asks rhetorically. His answer: Roger Deakins-style. The legendary cinematographer is a perennial favorite with Kelly, and his Oscar-nominated work on No Country for Old Men provided something of a template for the Last Flag Flying’s look. “It’s naturalistic and not flashy,” Kelly observes.

When queried about other artistic references, Kelly cites photographer/artist Todd Hido and documentary photographer Jeff Brouws as influential. Both of their work echoes themes advanced by the New Topographics movement from the mid-70s: eerie atmospherics of desolate “non-sites” and the mystique of the banal. Like its champions, Kelly sees romance in “night landscapes of gas stations and a car parked under a street light--industrical wastelands that to most people aren’t pretty, but to me they’re fascinating,” he muses.

So much so that for years the DP collected visual references of such settings. With Last Flag Flying he was finally able “to interpret these cinematically.” The imagery highlights what he considers an underlying pathos that’s subtle yet effective, and that mirrors Doc’s loss.

“This whole movie has a layer of dirt on it, a layer of sadness,” Kelly remarks.

But far from sapping his verve, the paired motifs of sorrow and grime appeal to his romantic side. He recounts scouting for locations with production designer Bruce Curtis when they surveyed the bar featured in the first scene. “This is amazing! It’s so decrepit! It’s got a patina of dirt!” the filmmakers reportedly enthused. The dingier the better.

Kelly recalls the benchmark Linklater set over lunch early on in pre-production. “It was sort of a grey day and he said, ‘I don’t want the movie any lighter than this.’ Though the sun shone throughout much of the three-month Fall shoot in Pittsburgh, joined with four days in New York, there’s a touch of amusement in Kelly’s voice as he reflects on the “battle” to go moodier.

Cranston’s waggish performance led Kelly to rethink his take on the material. “It became more comedic once we saw what Bryan was doing,” he says. “There’s such a sadness about what Steve was doing, and Bryan lightens it up.”

Per the DP, Linklater encouraged the black comedy vibe. He remembers the director cautioning, “Don’t make it too depressing for people!” Kelly “lightened up” certain scenes accordingly. Where before he keyed in on the tragedy of the situation, now he played up the characters’ bonding and vitality. “They’re still alive to talk.”

In the movie’s many close-ups, the camera is a microscope, magnifying wrinkles, scanning stubble, zooming as if probing, yielding portraits of grit. Asked about this visual intimacy, Kelly recites Sal’s pungent comeback after Col. Willitz (Yul Vazquez) equates Doc’s plan to bury his son at home with “cutting off (his) nose to spite (his) face”: “Did you look at these faces? They’ve already been spited.”

The DP points out, “When you have these great faces, you want to see the history there. These guys are haggard. They’ve been through a lot and it should show.” Fortunately, the actors submitted to the harsh, tell-all lighting, vanity be damned.

Beyond the dramatic payoff, there were also practical reasons for zooming in. “So much of this movie was shot in tight quarters,” Kelly says, noting that the characters were often sitting at bars and tables, or in cars, trucks and trains. “How can we make this different?” became the big challenge. With little room for wide or medium shots, one way to vary the visual palette was to amplify reactions. Another was to adjust the height of the camera, and where possible, that of the seats. For mobile shoots, filming through a windshield offered added range.

To accommodate low-light scene shooting, Kelly used a Panasonic VariCam outfitted with Panavision Primo lenses. “It gave the gritty, filmic quality I was going for,” he says.

The climactic funeral scene of Last Flag Flying extended a certain rigor to the visual style. Throughout it, the cinematographer pays solemn tribute to the body movement and faces: charting the choreography of the flag folding; reconnoitering the freshly groomed whiskers; saluting the crisp, ship-shape uniforms. The characters’ costumes (designed by Kari Perkins) have hardly varied throughout the film, Kelly observes, “so when the uniform comes, it’s almost a shock. The guys stand up straighter.”

Pressed about this climactic sequence, the DP notes his camera design “became a lot more structured, a lot more introspective.” He uses the word “refreshing” to describe the experience of “coming out into the light with these characters and showing their pride.” For all of the institutional hypocrisy, futility and ineptitude the trio has endured and skewered, ultimately service is sacred, “and it’s still part of who they are.”

This is brotherhood drama, part macho, part yielding, with an earned emotional reward. And in the current political climate, it may come as a surprise to some viewers how deeply moved they may be.