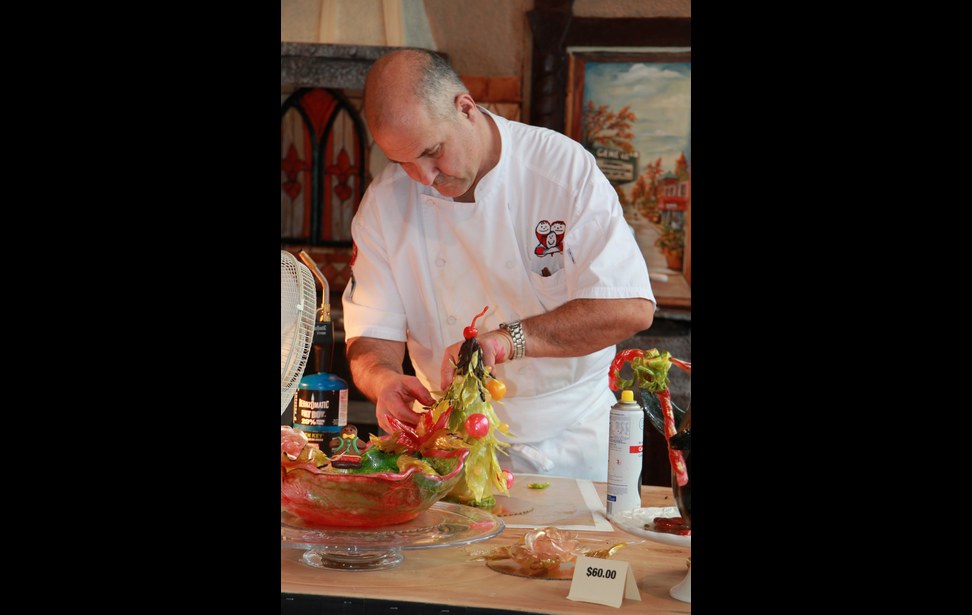 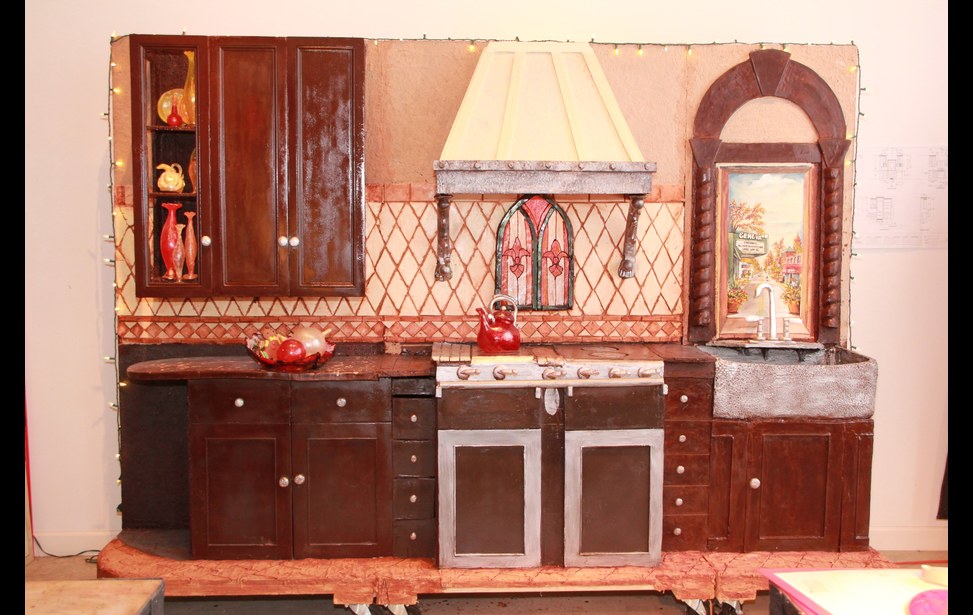 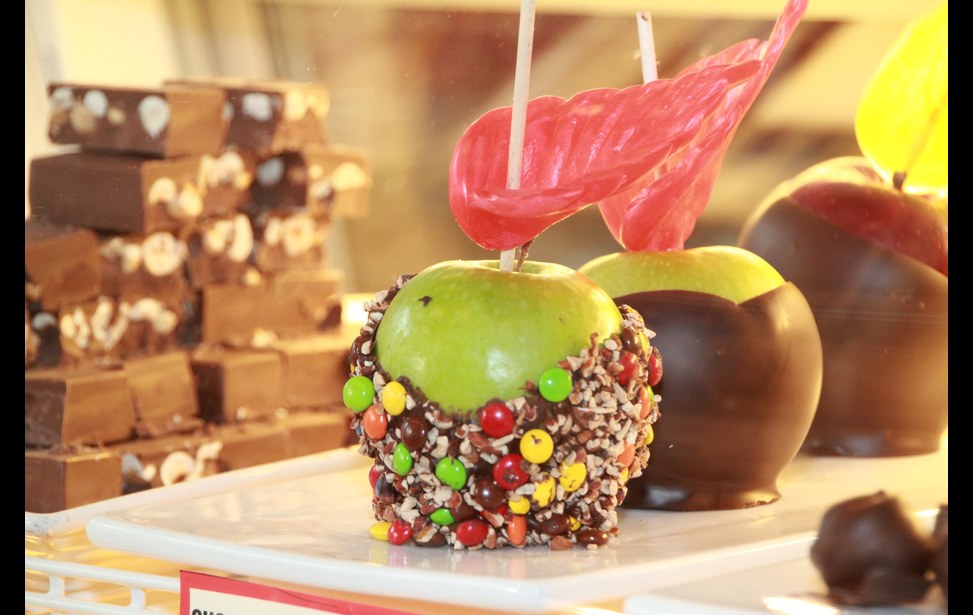 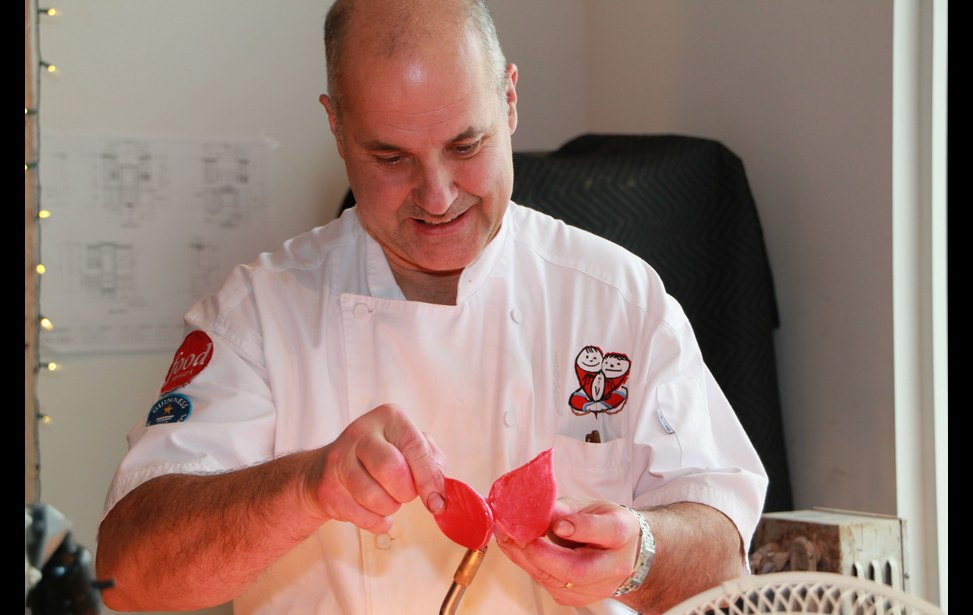 Chef Alain Roby’s All-Chocolate Kitchen is probably best described as a miniature Willy Wonka Factory, filled with Roby’s life-sized chocolate and sugar creations, including a replica of his own custom kitchen (as seen in Photo 2), made out of 1,500 pounds of Callebaut chocolate (a gourmet Belgian chocolate brand).

What makes this chocolate museum and retail shop particularly special is Roby’s hands-on involvement and accessibility. He’s often right in the middle of his store, sculpting works of sugar and chocolate that are for sale after his live demonstrations (as seen in Photo 3). For budding pastry chefs and chocolatiers, this is a must-see.

Roby, who grew up in France, learned his culinary art in Paris from Pastry Chef Lenotre. Since listening to his heart, and entering culinary school, much has happened. “If you follow your passion, you’ll always end up in the right place,” says Roby, explaining how he went from starting law school to finishing pastry school. Since then, he’s served as senior corporate pastry chef for Hyatt Hotels and Resorts for 20 years, private pastry chef for the Shah of Iran, and head pastry chef at the NFL Commissioner’s Super Bowl Party.

He’s also won two Guinness Book of World Records for “World’s Tallest Cooked Sugar Building” and “World’s Tallest Chocolate Sculpture.” The top of the tallest chocolate sculpture is on display in Roby’s shop. He says it took him about five months to complete the 20-foot-tall skyscraper. Roby was recently asked if he’d be interested in pursuing a third Guinness World Record: making the world’s tallest chocolate cactus. (He’s not sure if he’s game, but his decision is still pending.)

These enormous creations catapulted Roby’s visibility to new heights. Most recently, he appeared on the “Martha Stewart Show” where he created a 1,350 pound chocolate cake that reached more than six feet tall. He’s also been on the Food Network shows “Extreme Pastry” and “Sugar Rush,” as well as three of the network’s specials: “Unwrapped with Mark Summers,” “Mystery Birthday Cakes,” and “The World’s Tallest Sugar Building.”

In the cafe/viewing room at the back of Chef Roby’s All-Chocolate Kitchen, you can watch his show appearances on a flat-screen. Take a few steps from the TV, and you’ll run into a Chicago Blackhawks hockey player, a dinosaur, and an astronaut—all carved out of chocolate. According to Roby, his white chocolate astronaut was originally ordered by the Adler Planetarium in Chicago as a display for museum visitors—primarily children on field trips. “About every two weeks, I’d get a call to replace one of the chocolate fingers,” he says with a knowing smile.

Admission to Chef Roby’s edible museum is free. The location offers Roby’s signature Grand Cru hot cocoa, chocolates, and pastries. Private tastings and demonstrations are available upon request. If Roby happens to be in the shop—and isn’t creating Tahitian Caramel truffles, or blown sugar figurines (as seen in Photo 4), or (his favorite thing to make) Dark Chocolate Orange Confit—don’t be surprised if he sits down with you. You may also bump into his wife Esther, who is an accomplished oil painter and also works in the shop.

Visitors can also learn about the Saving Tiny Hearts Society, which is something near and dear to Chef Roby and Esther’s hearts, as their own son was diagnosed with a congenital heart defect. A portion of the profits from Chef Roby’s All-Chocolate Kitchen are donated to the organization.