Shane Hurlbut Looks Back On Filming Act Of Valor 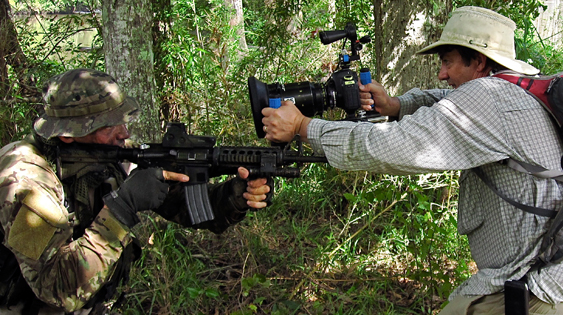 Speaking at an Adobe event on tips and tricks, Cinematographer Shane Hurlbut took a look back recently on the film Act of Valor, which he shot using the Canon 5D Mk. II almost exclusively. The film was the first major feature shot on a DSLR, and really blazed a trail for a run-and-gun style of filmmaking that could really hold up on the silver screen, and Shane says it’s an excellent case study on what a lower cost camera can actually do.

“This journey was one I can describe as waking up every day getting punched in the face, hit in the head with a shovel, and [getting] buried alive.” – Shane Hurlbut

Hurlbut’s talk was part of the Adobe Tips and Flicks session in Washington D.C., and has rather served as a warm-up for Shane as he gears up for his own tour on cinematography and lighting called the Illumination Experience.

So it seems like light years ago that Hurlbut was shooting with a plucky DSLR that nobody believed could handle the cinemagraphic load. Shane says that while filming with the Canon 5D Mk. II was a challenge, by bringing a fearless, never quit attitude to the game, he was able to overcome the issues of a Beta test DSLR he had never used, and a sketchy, flat picture style. The film, though, lended itself to the run-and-gun style the camera gave him in spite of the technological challenges.

When everyone is telling me “this is not possible,” I know I’m going in the right direction.

Shane went on to say that while everyone was telling him that a DSLR couldn’t hold up to a big screen experience, he just considered they did not really knowing what they’re talking about. “This small device packs a whollop,” he told the crowd,”an immersive, visceral experience.”

The 5D Mk. II gave the filmmakers the ability to shoot scenes in hours, rather than days. ?And it let him shoot a movie in a style that is very similar to first person shooter video games.?All too often, he’s even shoot scenes on the fly when the light his a beautiful part of the landscape he was in. That’s what the DSLR bought him, short setup time and great images.

You have to fail, to succeed … and it was a great learning experience.

“This Call of Duty, first-person-shooter thing is so hot right now, let’s start clampin’ the camera and move it around,” Shane adds. And in doing so, he was able to give the audience an immersive experience from the eyes of the US Navy SEALS. Oh, and btw, they shot real Seals who shot REAL bullets. So the runnin’ and gunnin’ is quite literal.

Shane also says that given the limited access of Navy SEALS for only four occasions, required him to think outside the box and plan the shoot to the smallest detail in order to get the most bang out of that limited option.

At the end of the day, Shane says you can’t be afraid to fail. You have to be bold, push the edge, and learn from your mistakes. But the key is, to keep moving forward.?Check out the video below, it’s very interesting. And you can also check out our very first episode of doddleTALKS Tech, where Shane talks about it as well.

The post Shane Hurlbut Looks Back On Filming Act Of Valor appeared first on Doddle.