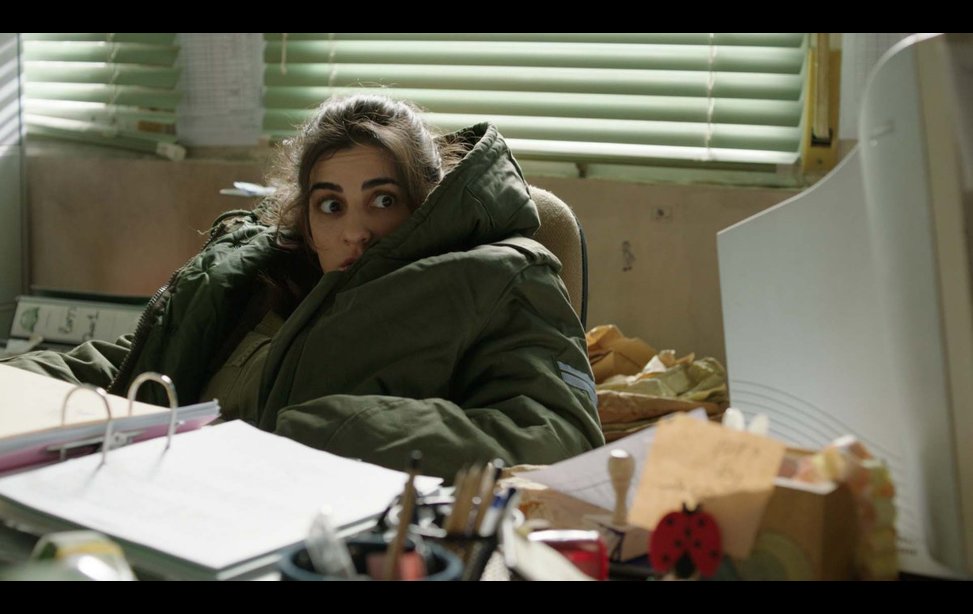 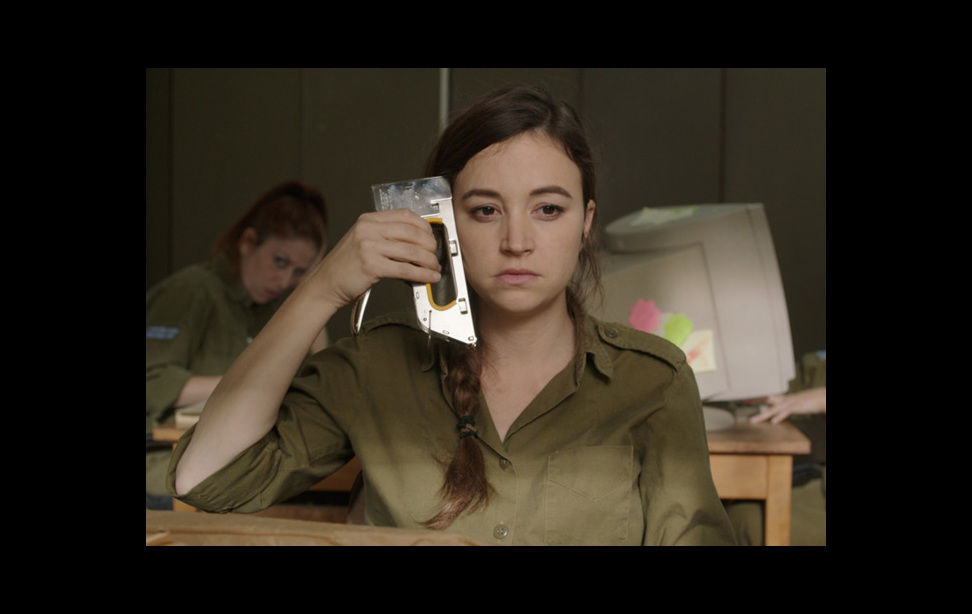 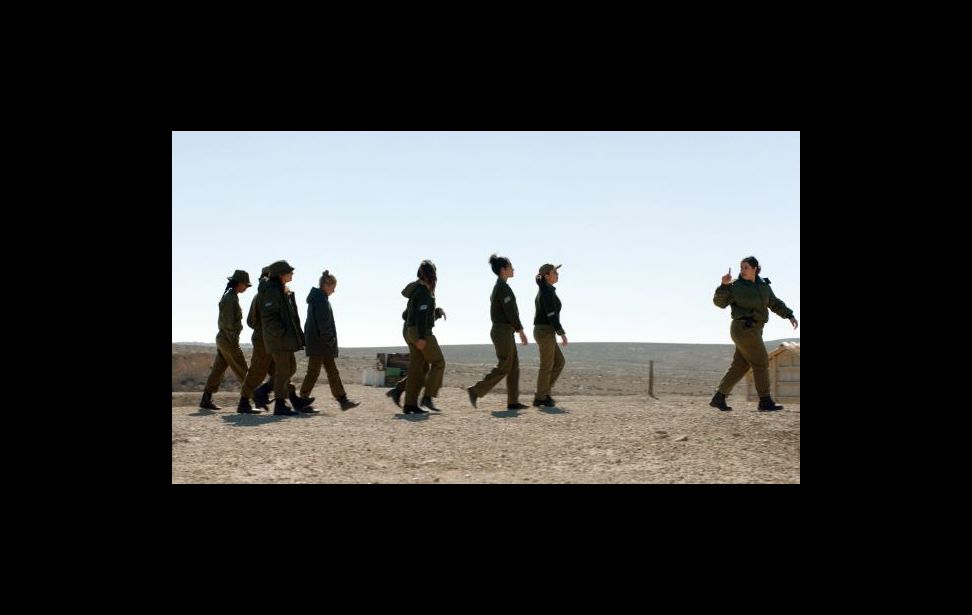 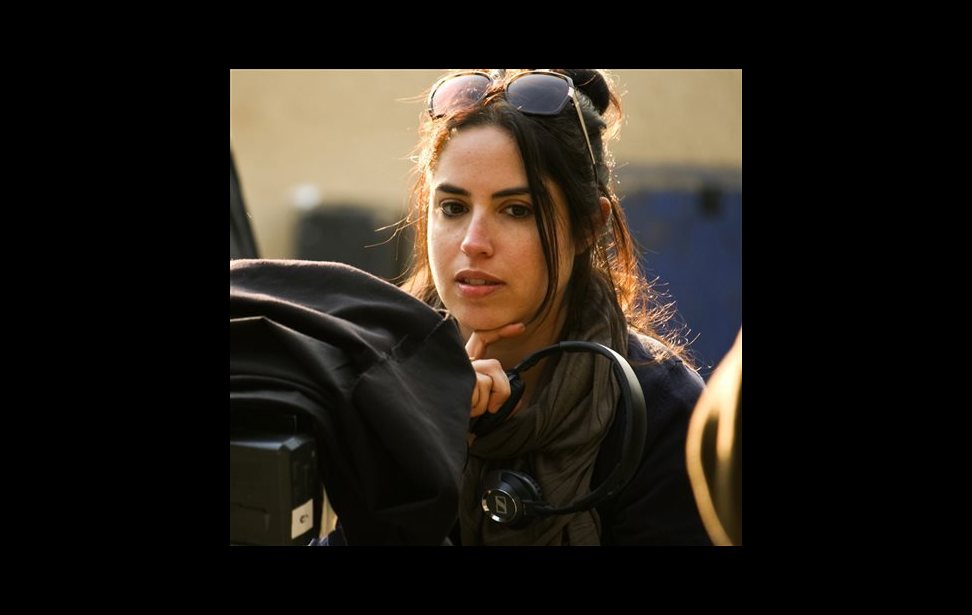 NEW YORK, NY - Khaki is the color worn in Tribeca prizewinner Zero Motivation, but perhaps not since Robert Altman's M.A.S.H. has the tone of an army comedy been so black. Set on an artillery base in the Israeli Negev, Talya Lavie's debut feature follows an administrative unit of female Israeli soldiers as they go about their daily ruts. Only the desert setting is drabber than their moods as they shred papers, check dossiers and serve coffee at the perilous frontlines of this godforsaken human resources office. Without power intrigues, egotistical fantasies and the online game Minesweeper, how could our young heroines relieve their soul-crushing ennui?

Zero Motivation begins on a deceptively sunny note. We meet Zohar (Dana Ivgy) as she's saving a seat on the bus for her BFF Daffi (Nelly Tagar). Head touching head, they nap en route to the base. There the weekend R&R officially ends. Rama (Shani Klein), the officer in charge of these young recruits' fates, fears that their slacker antics might frustrate her rise in the ranks. Lucky for us, she commands with a mean-spiritedness verging on the comically foul. It's considerably less fun for her soldiers. We understand why Daffi dreams of being transferred to a cushy job in Tel Aviv, though Zohar, who feels it's an effront to their friendship, does not.  Beyond preserving their bond, what mostly rouses Zohar is losing her accursed virginity.

Lavie's protocol of sass echoes at all ranks. As far as Zohar is concerned, resisting Rama's arbitrary rule is a strategy for sanity (as seen in photo 1).  When tasked with removing a stain on Rama's shirt, what else would she do but cut out a big hole? As we gather, the characters' interpersonal skills leave much to be desired. Not for naught is the film's Hebrew title Efes be-Yachasei Enosh, which translates as "zero in human relationships."

The story unfolds in three chapters: "The Replacement," "The Virgin" and "The Officer." Partway into "The Replacement," a tragic event initiates us into the melodramatic line that Lavie is willing to tread. But today more and more Israeli filmmakers -- especially of the Lebanese War generation -- laugh that they may not cry, and it's soon back to the business of dark satire. Lavie's own mandatory IDF service inspired a degree of this hi-jinx, though it's her filmmaker training that's behind the film's climactic twist: that if a staple gun is in the drawer in the first act, then it must go off in the third (as seen in photo 2).

From Russians to kibbutzniks, Zero Motivation has zero hesitation to skewer Israeli society. Each character presses her campaign with a degree of obliviousness to others' feelings and needs. "I spared you the humiliation" becomes a preferred barb as Zohar and Daffi help and hinder one another's ambitions. The film figures that we all have a selfish side. We do. But that's not the only reason it resonates. If antipathies are forged in the tedium of service, so too are friendships. No need to have served in the IDF to know that devotion to another person is not always easy to execute on. Although set in a specific idea of Israel during 2003 - 2004, Lavie's feature-length expansion of her short film The Substitute is fodder for the world stage thanks to its universal themes.
This isn't the first Israeli movie to focus on women in the Israel Defense Forces based on veterans' personal experiences. Vardit Bilu and Dalia Hagar's 2005 drama Close to Home holds that distinction. Yet insofar as both works allow their makers to stick it to their erstwhile afflictors in uniform, Lavie's dish of revenge is served colder than its predecessor's. But Zero Motivation is motivated by more than getting back at meanies.

It has a larger critique in mind. The film sounds a battle cry against conformist Israeli values and the insidious incursion of army speak into everyday language and culture. What's eating the youth of Israel that they suspect the gung-ho slogans of self-sacrifice-for-the-greater good? When Rama metes out a collective punishment for her rebelious young charges (as seen in photo 3) it's tough not to imagine that Israel's policies towards its enemies have taken a toll on the very citizenry these were designed to protect. "I wanted to tell the truth," Lavie told thalo.com. "The film is a window into Israeli society, because everything from the outside is coming into their office."

Lavie's brazen script also takes on lingering machismo in Israel's militarized society. Men loom over the power hierarchy and touch off the intimidating, condescending ambiance that Rama passes along. Whatever excesses she resorted to during her tenure, her goodbye party reveals her as a victim who caught the contagion of the aggressor. While it's doubtful that Rama will join the ranks of Women Who Changed the World, the title of the book she gets as parting thanks, Lavie makes sure that we see the fuller context of her behavior and are brought to sympathize with her.

The film is bookended by that symbol of connectedness and entropy in Israel: the bus. When we first encounter this public vehicle, it's crowded enough to cost Zohar and Daffi their seats. The final image of a bus shows why the army experience is one that will be missed after all. Said Lavie, "When you get the freedom that you wanted so much, you think, Ok, now that I can sit anywhere, where will I sit?" She mused, "There's moment of fear when you get your freedom." (Please see photot 4.)