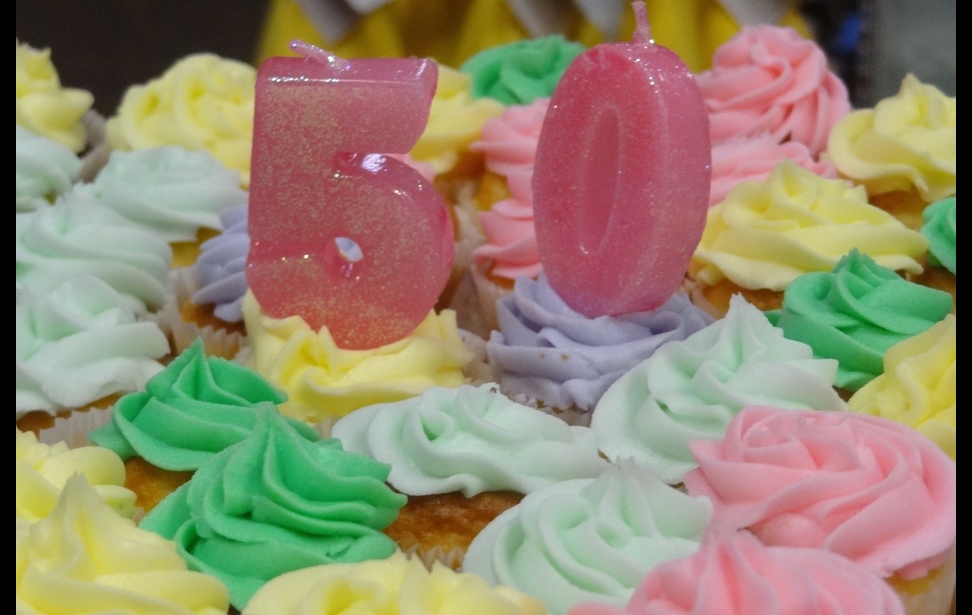 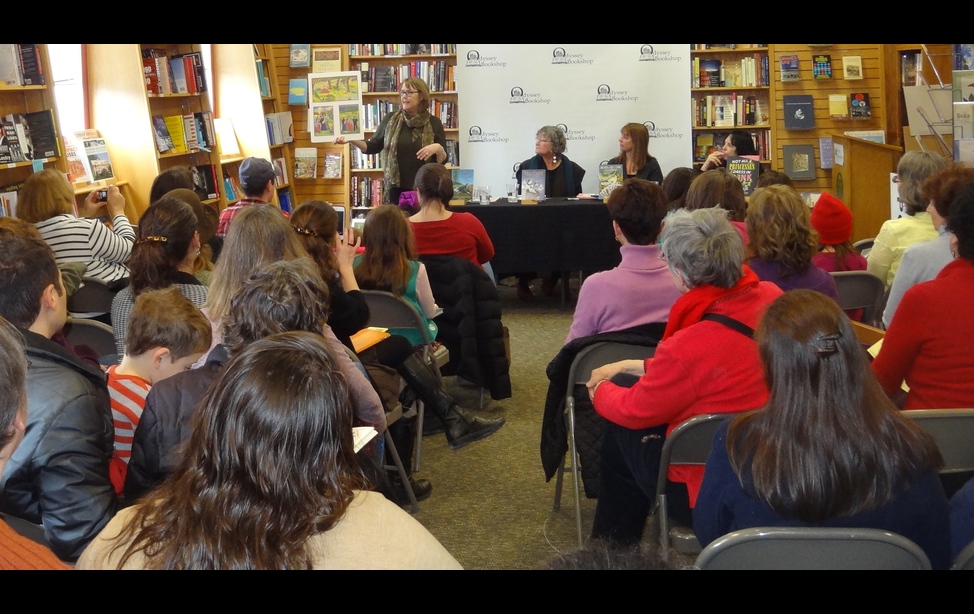 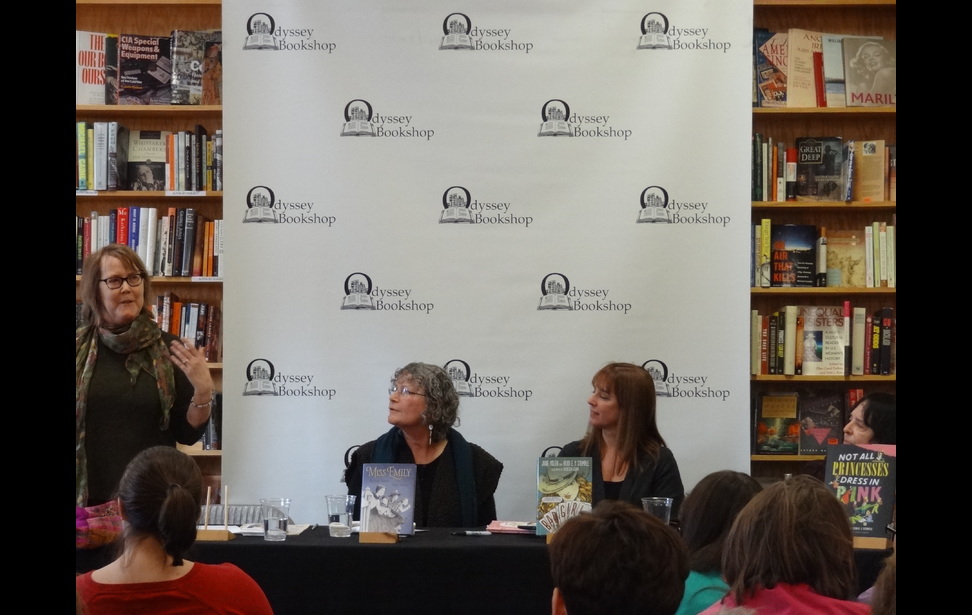 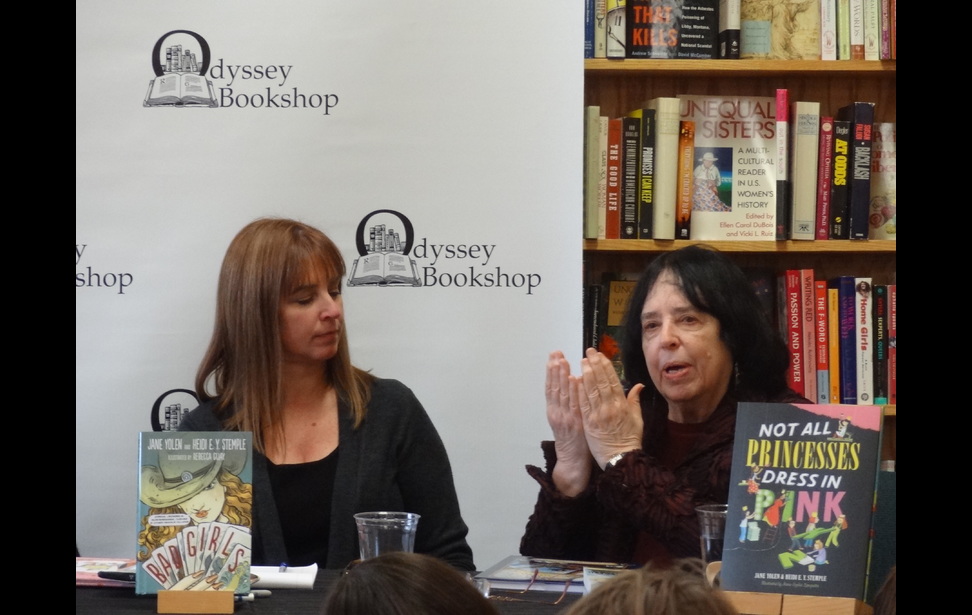 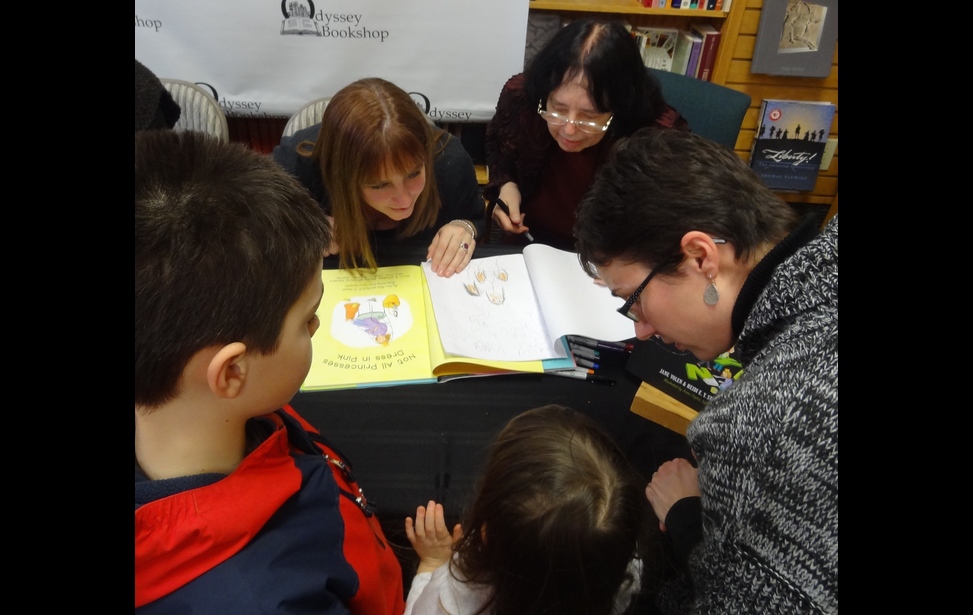 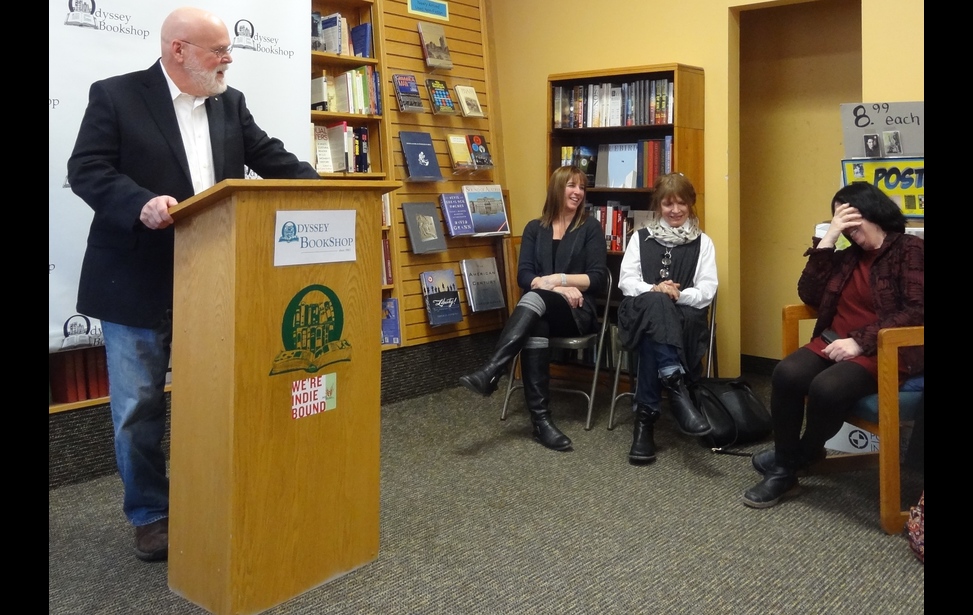 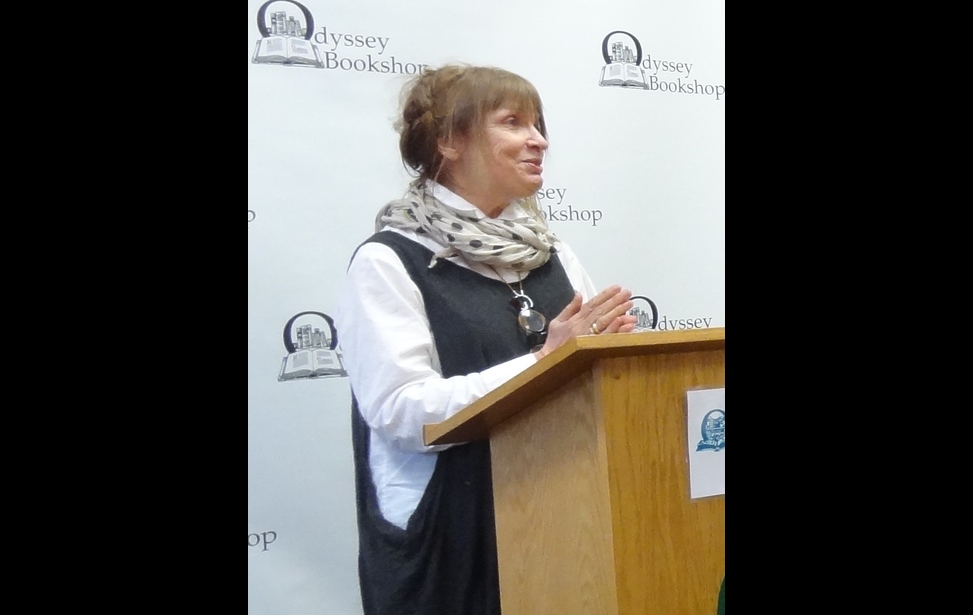 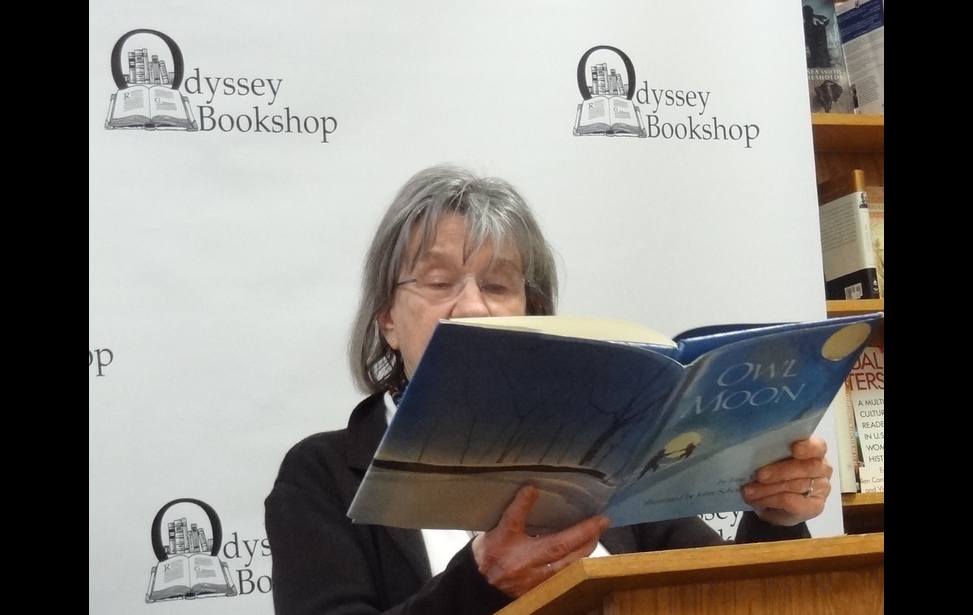 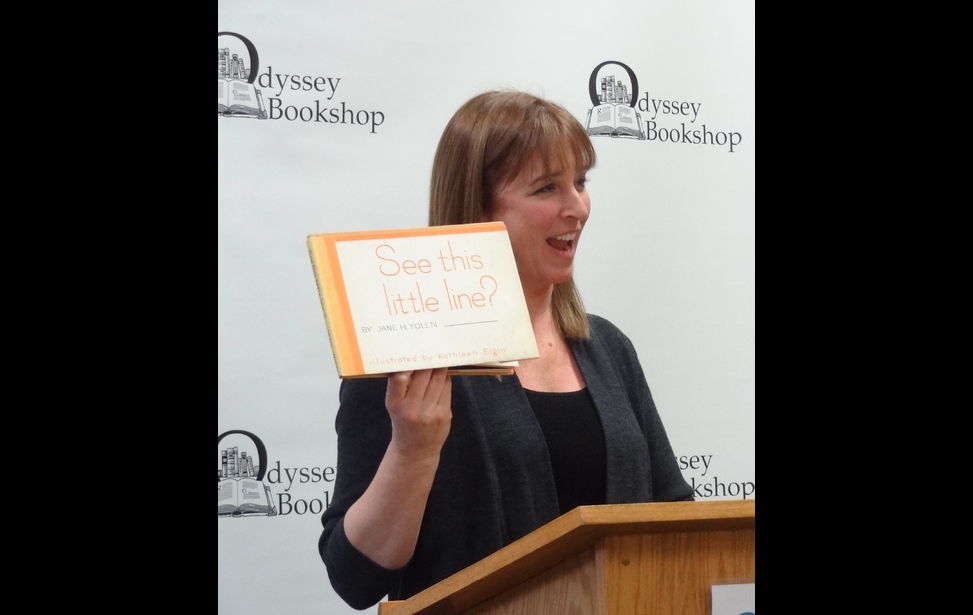 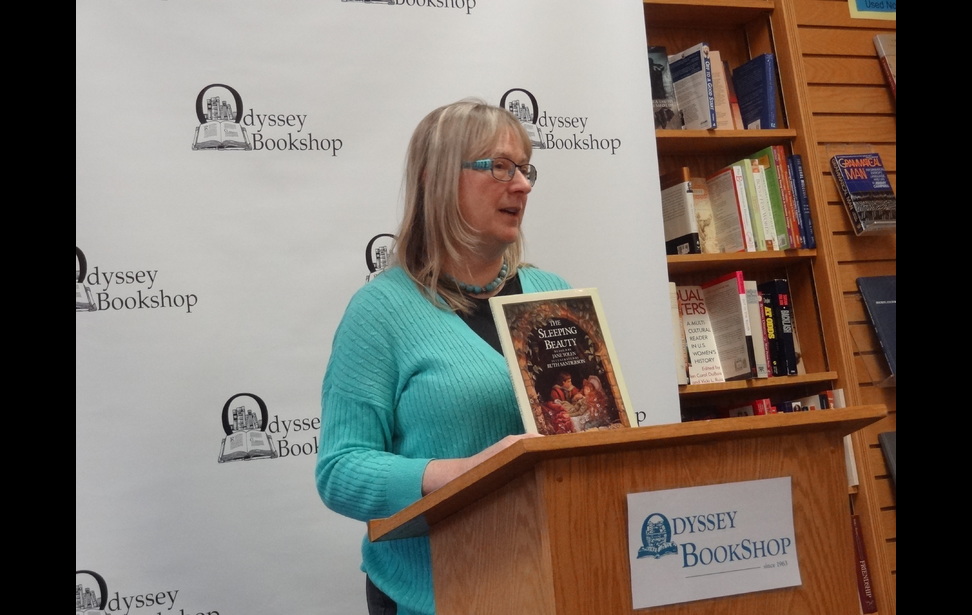 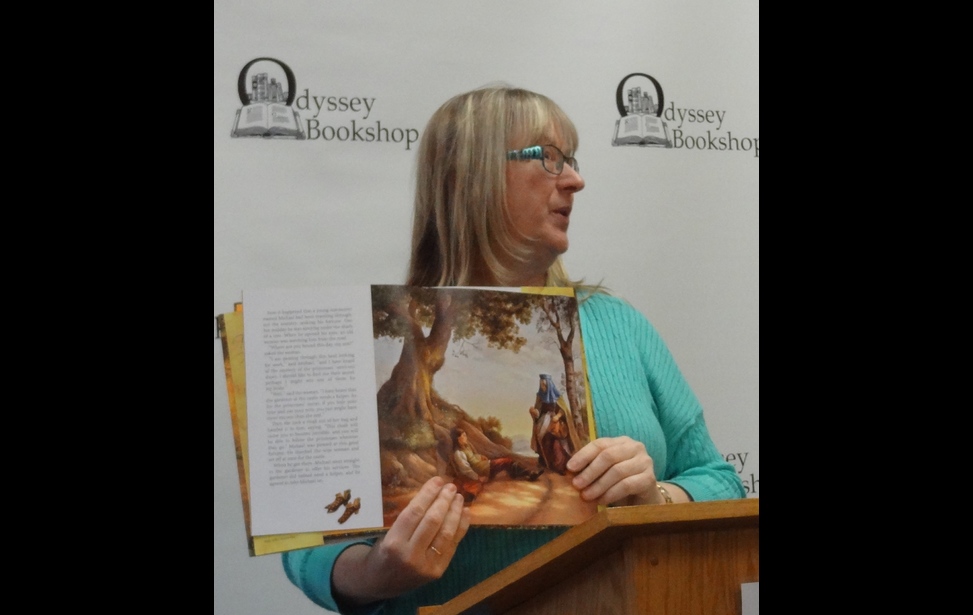 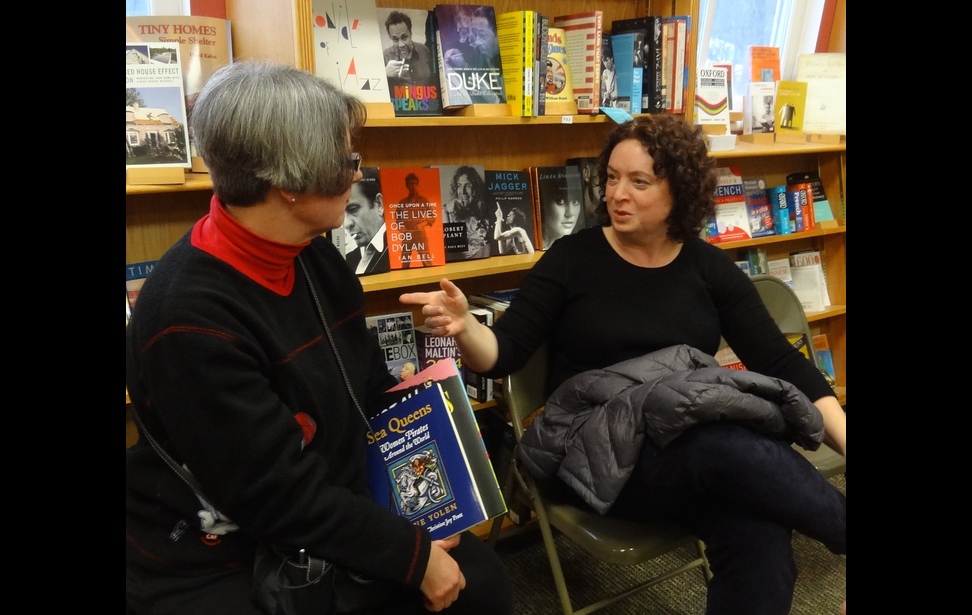 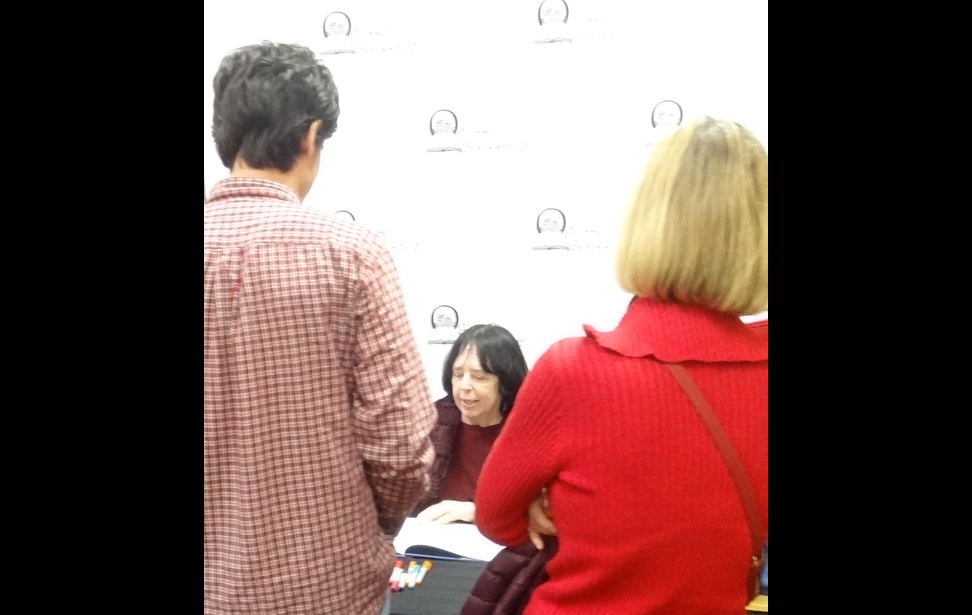 South Hadley, MA—On March 2, 2014, the Odyssey Bookshop in South Hadley, Massachusetts, hosted an event to celebrate Jane Yolen’s 50 years in publishing (as seen in photo 1). Yolen is the award-winning author of more than 300 books for children. Her first book Pirates in Petticoats was published on her 22nd birthday, and she hasn’t stopped writing since. She is most notably known for her children’s classics, How Do Dinosaurs Say Goodnight?, The Devil’s Arithmetic, and Owl Moon.

Yolen has also written essays, poems, books on writing, and fiction for adults. She attends talks, school visits, and conferences for writers where she imparts her wisdom on writing, storytelling, and the magic of language. She is an integral part of the publishing industry.

In fact, she never stops working. Just hours before the celebration, Yolen spoke on a panel with Jeannine Atkins, Burleigh Muten, and Heidi Stemple (as seen in photos 2-4). The topic? “Women in Print—Celebrating female heroines, villains and the women who wrote about them!” Each author talked about their passion for women’s history, the heroines in their lives, and the importance of breaking through stereotypes to create strong female characters. Yolen even took the time to autograph books and talk with fans (as seen in photo 5).

And then the celebration began. Artist Barry Moser (as seen in photo 6) opened remarks with jokes and kind words about his career and friendship with Yolen. Illustrator Jane Dyer (as seen in photo 7) reminisced about “The Janes Tours,” of which Dyer and Yolen had a multitude of adventures together.

Patricia Lee Gauch (as seen in photo 8) talked about her beginning career as an editor at Philomel, an imprint of Penguin. She happened upon a manuscript in the slush pile called Owl Moon, and thus began her career with Yolen. “It’s the editor’s job to keep the faith,” said Gauch. And that faith has kept Owl Moon a well-loved bedtime story in the homes of children for decades.

Yolen’s daughter Heidi Stemple (as seen in photo 9), who is also her manager and co-author, told stories of her childhood and talked about what it was like to work with her mother. She even joked about the eulogy she’s been working on—No, her mother cannot edit it beforehand. She said most people tell her they could never write with their mothers. Stemple’s reply, “But you could write with my mother.”

Though they all had different stories to tell, the speakers all had one thing in common—their gratitude and admiration for this remarkable woman whose knowledge and creative sprit helped shape their careers and fulfill their lives. As children’s illustrator Ruth Sanderson (as seen in photos 10 and 11) said of her career with Yolen, “Jane is the fastest pen in the West…At 300 plus, we’ll never catch up to her. She is the queen of story.”

In her closing remarks, Jane Yolen said, “Fifty years in publishing; I don’t have another 50 years, but I have 50 years worth of stories in my head.”

Afterwards, cupcakes and tea were served, and fans mingled over their favorite Yolen books (as seen in photo 12 and 13). Hannah Moushabeck, children’s department director of The Odyssey Bookshop (and huge fan of Yolen) said, “I am honored to organize an event that celebrates such a wonderful woman's achievements. Jane not only inspires her readers but also offers guidance and support to writers, educators, illustrators and independent booksellers!”

If you need a little inspiration, or a swift kick in the motivation department, just ask Jane Yolen what she had for breakfast. Chances are, she’ll tell you about the poems she’s written over her first cup of tea. And the chapter revisions on an upcoming novel. And the speech she’s started for her next event. And that’s all before most of us have even started the day.

Photo 5: Heidi Stemple and Jane Yolen admire a picture book that fan, Phoebe, made for them

Photo 13: Fans line up to get autographs on their favorite books