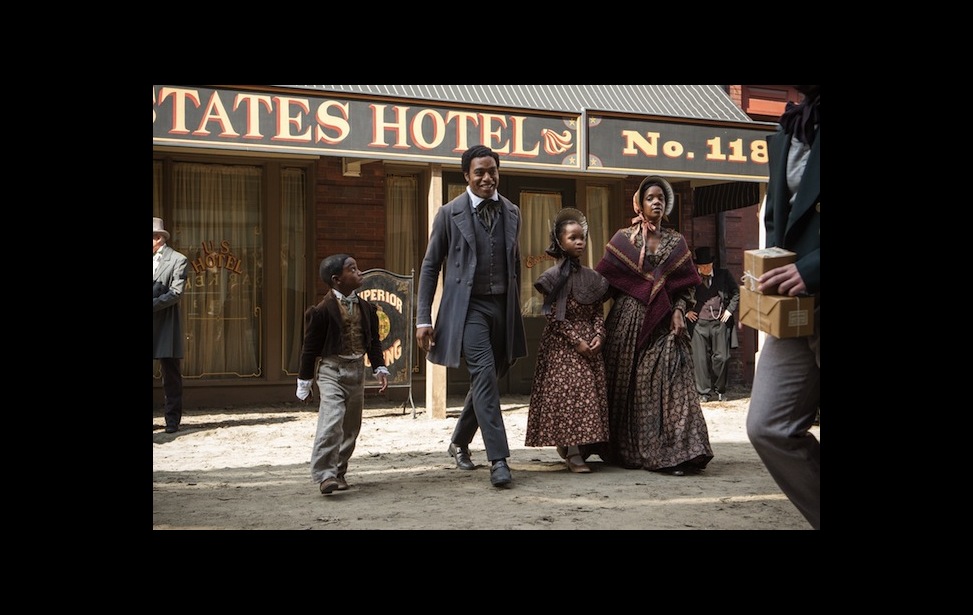 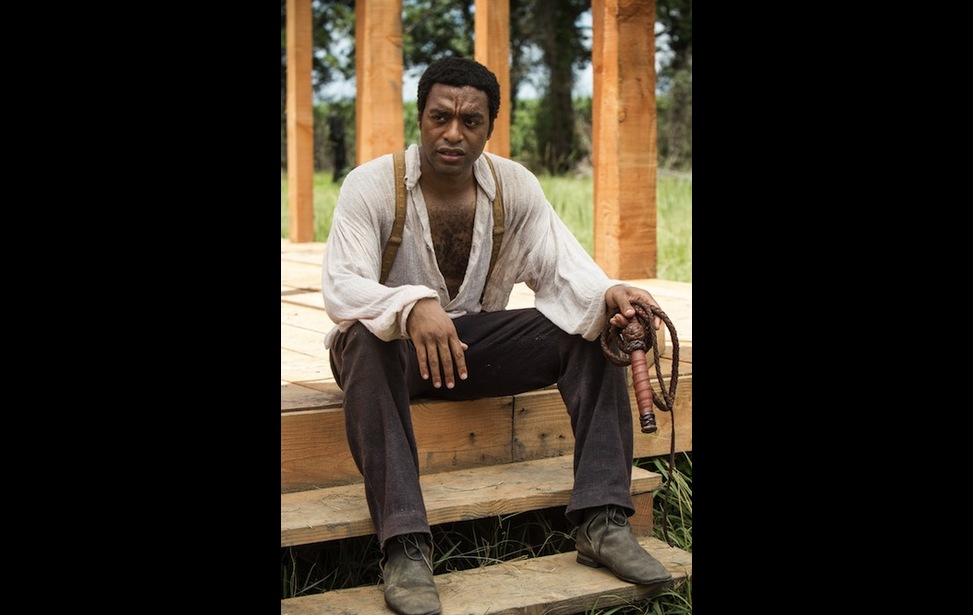 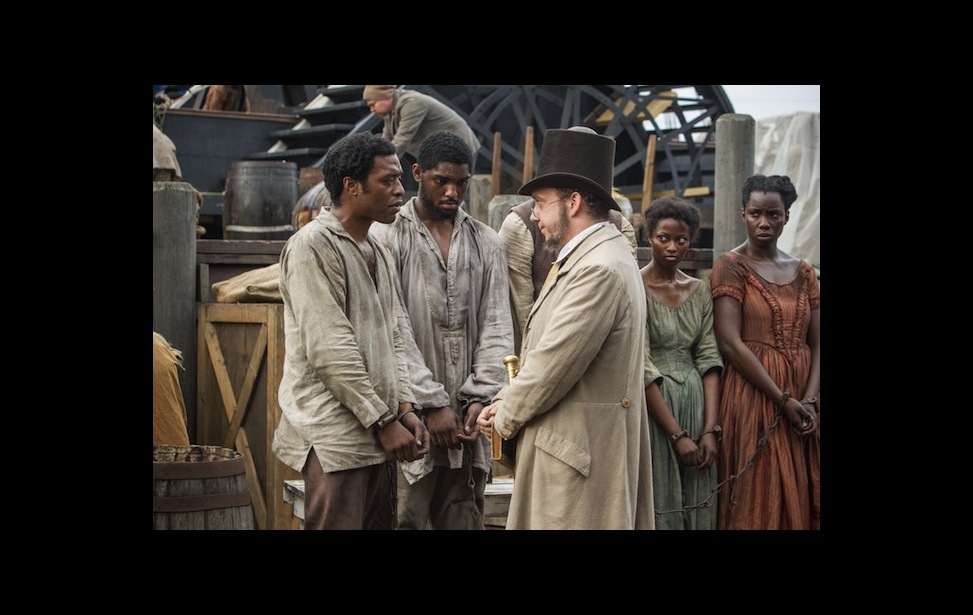 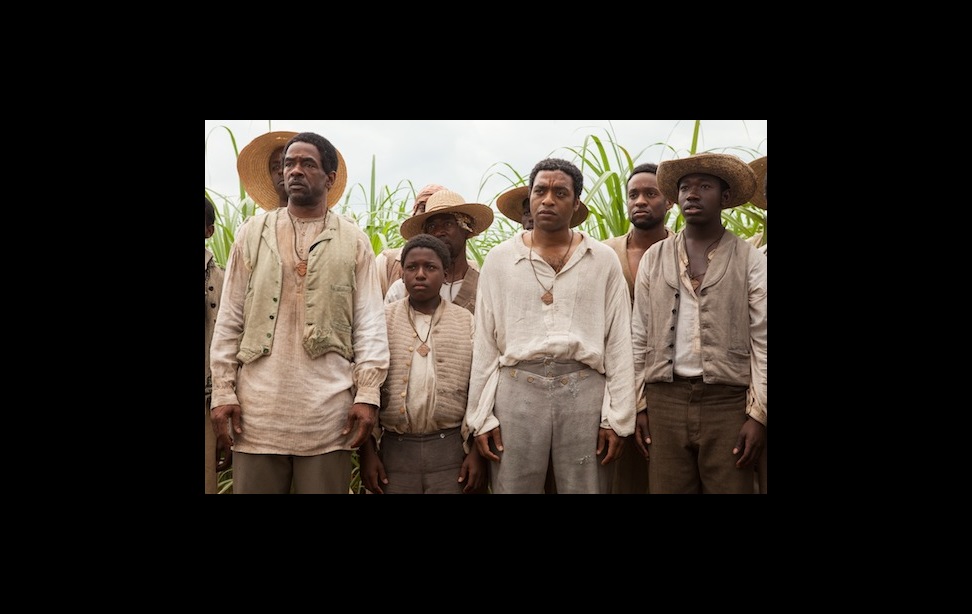 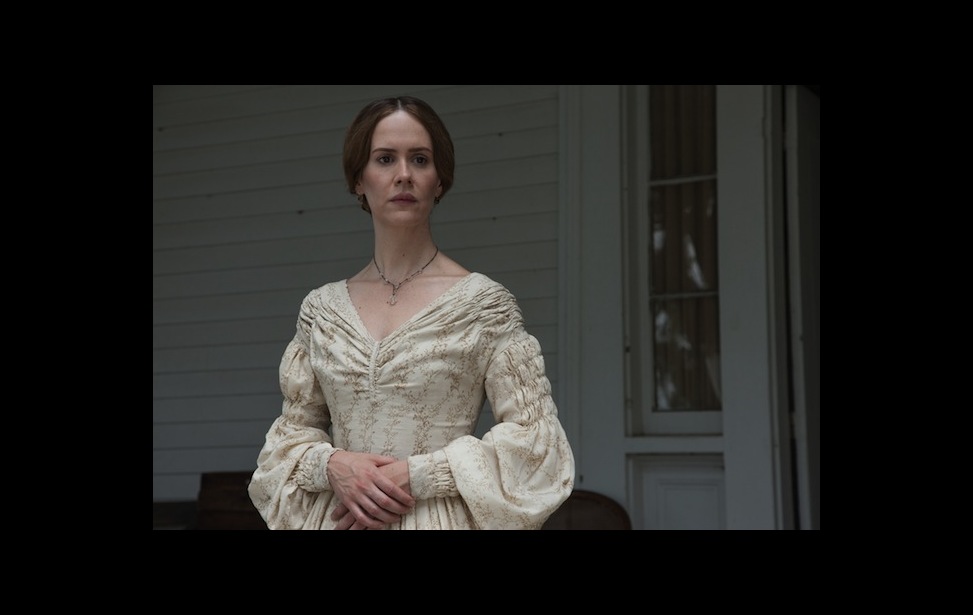 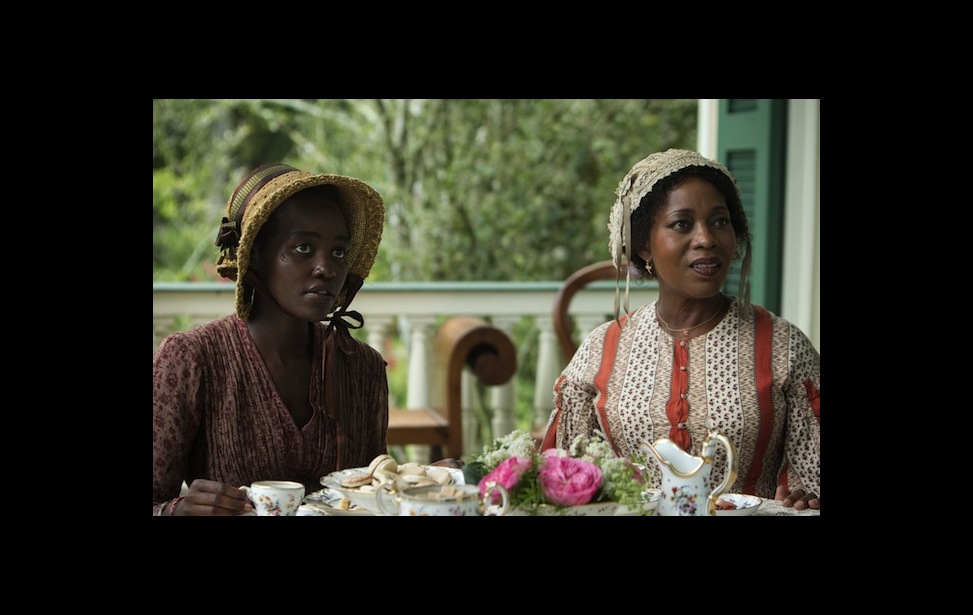 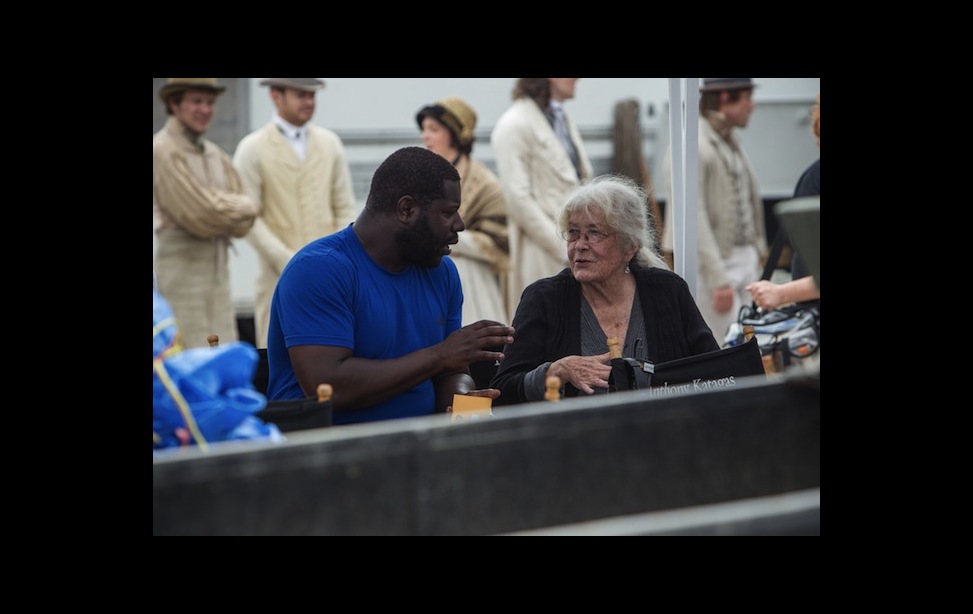 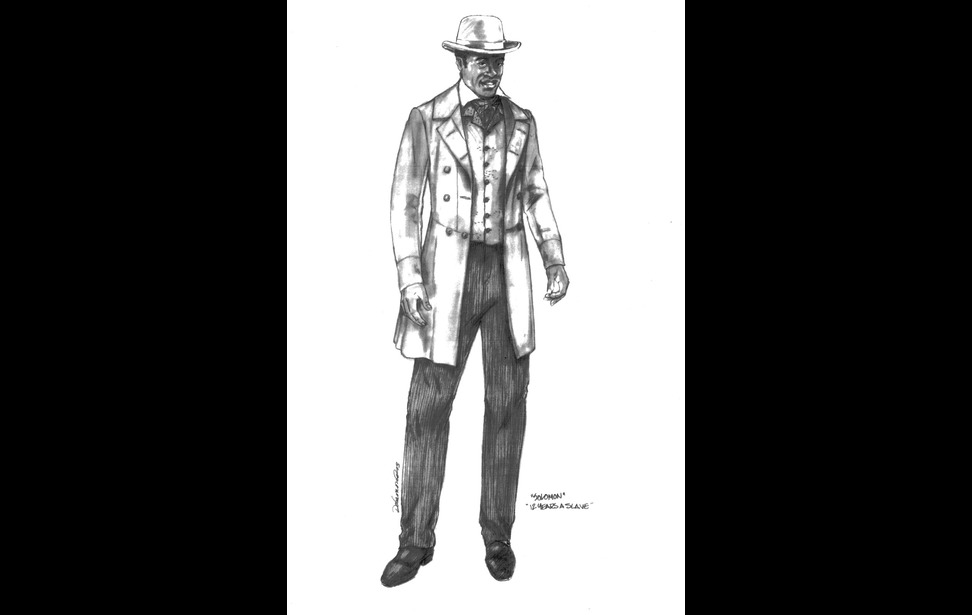 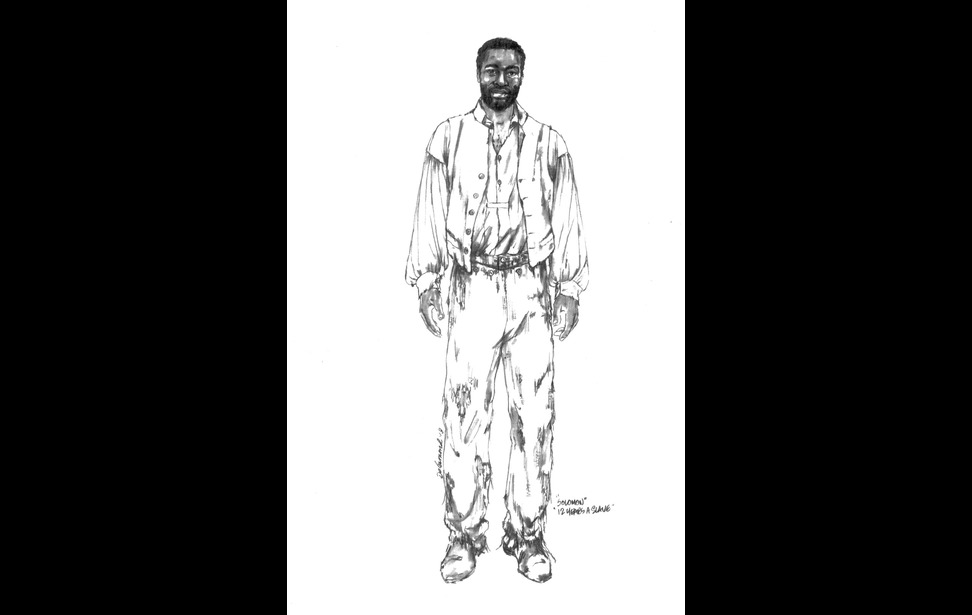 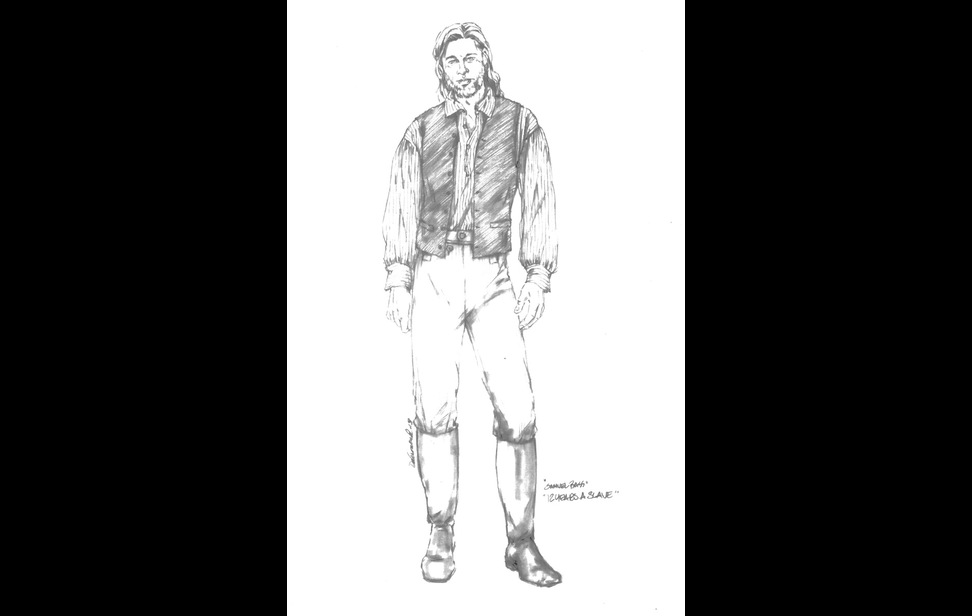 Seeing the wardrobe changes in Steve McQueen's 12 Years a Slave is all you need to grasp the ordeal of Solomon Northup, a free man who became a slave and found his way back to freedom. Clothing was a conspicuous marker of social status in the antebellum South, as costume designer Patricia Norris so affectingly showed with period recreations (as seen in photos 1 and 2) that have earned her a sixth Oscar nomination.

In her more than four decades in Hollywood, the octogenarian costumer has racked up credits including Days of Heaven, The Elephant Man, Victor Victoria, Scarface and Blue Velvet. She has also bagged a Lifetime Achievement Award from the Art Directors Guild.

thalo.com talked with Ms. Norris about her research into an era when enslaved plantation workers planted, picked, ginned and baled raw cotton for mills as farflung as the American North and Europe -- yielding the textiles and clothes that branded them as slaves.

thalo: What were your visual sources?

Patricia Norris: I really had to use my imagination to figure out where they got their clothes. Etchings weren't helpful because it was the happy slave under the tree. I got more from just reading.

th: Did Solomon Northup's autobiography detail what he and others wore?

PN: I didn't read it, and other point-of-view books didn't address the subject.

th: Weren't there any daguerreotype images to consult?

PN: There is no camera stuff that was helpful. Most of what you see is a bit later than the featured era (of circa the 1850s).

th: How did slaves get their clothes?

PN: The owners were responsible for their clothing. It became like adopting a child. The owners didn't throw things away. Clothing got passed down to the slaves.

th: So everything would have been second-hand?

th: Why don't we ever see African fabrics?

PN: That was one of my first questions. I thought I could work in some of those fabrics, but I read early on that when the Dutch started sending slaves over, they sent them naked. Their African clothes were taken away. The Dutch didn't want them to have any identity.

th: What went into making the slave clothes look soiled, and how'd you get the shades of dirt right, down to the clay, sand, silt, loess and black swamp mud (as seen in photo 3)?

PN: We had a wonderful ager and dyer, Scott Coppock, who, once we made the clothes, was very good at destroying them. And depending on the plantation, I would take a look and see that the earth was really dark, or that on another one it was really sandy. I went with that for aging people. If you were working in dark soil, your clothes were darker. The beige soil didn't show up as much. We tried to give each plantation a different look.

th: Speaking of beige, how did you choose your palette of mostly beiges (as seen in photo 4), whites, tans, greys, browns and blues?

PN: I love history, so I was not unfamiliar with the period. The cottons and linens and textures they used were woven, and they'd come out beige or white or those kinds of colors.

th: I read that fabrics like osnaburg, linsey-woolsey, jean and kersey were associated with the lower social strata, though these textiles were also available in higher grades for paid workers and other hired hands. How would you describe the language of clothing to denote social heirarchy?

PN: The house slaves were dressed better than the field slaves. They probably got the mistresses' clothing, and it went downward from there. (White) women were dressed well because they didn't do anything, really. They just ran the house and decided what dinner was, and their slaves did everything else.

All the plantations were not bad, slavery aside. Some owners really took care of their slaves. They were almost like livestock to them the way they'd take care of a cow because they wanted it to give them milk. They wanted these people to work.

th: Apparently, once a slave got shoes it meant that s/he worked the fields, which boded poorly for his or her survival. What did you do for the slaves' shoes?

PN: I used shoes on slaves because of the terrain. I didn't want the poor extras to be murdered out in those fields. I tried to do them in a dirt color like a flat espadrille or sandal just to protect. When people ran down roads I had to look out for them.

th: What were the plantation belles wearing on their feet?

NP: The styles were all square-toed and flat, or very, very tiny heels.

th: Was it considered unlady-like to wear heels?

PN: I think so. On another movie I was trying to find out when heels came in, and it was much later.

th: What was the 1850s vogue for plantation mistresses?

PN: The women had gone to the dresses coming off the Empire look. They had gone to two and three petticoats, but these became so heavy that that's when the hoop came in -- in the 50s (as seen in photo 5).

th: Where would these items have come from?

PN: New Orleans at the time brought in fabrics from London. And the ships brought in wonderful silks and other textiles. Unless the landowners were wealthy, the slaves had to look really poor.

th: Where did you find costume houses with items from the 1850s?

PN: London, for some of the vintage pieces worn by the white cast members. There are no costume houses in the States with things that early. I rented a few things from Western Costumes in Los Angeles...They had some good slave shirts that were on (the slaves') last wives. Fortunately they had not thrown them out. Shoes and boots were imported from Italy.

th: What was the inspiration for the stylish attire worn by Alfre Woodard's Mistress Shaw,  a former slave who has since climbed the caste ladder?

PN: If you were smart, you married a white man and became the co-owner of the plantation and you were rich. I felt that fabric looked rather African (as seen in photo 6).

th: How did you collaborate with Production Designer Adam Stockhausen?

PN: He sent me pictures of all the locations, which was very helpful.

th: Did Steve McQueen have any requests?

PN: We discussed things in general and then he left me alone. The one request he had was that (slave master Edwin) Epps be rather romantic. And we talked about style: how to go back maybe 10 - 20 years with the older clothes on the slaves (as seen in photo 7).

th: Do you usually hand-draw your own sketches?

PN: Yes. But on this film I didn't have time to do very large ones, so I would do bits and pieces, just drawing shirts or doing a pair of pants or a top or a bottom (as seen in photos 8 – 10). And that's how we made things. When you're on location they bring the actors in so late that unless you get it right you are in trouble.

th: How was it to work in the Louisiana heat?

th: Did that require using the lightest possible fabrics, such as cotton?

PN: We only used cotton and linen, since they're the only things that will hold the dye. You can't use any unnatural fabric added to it. But there's no protection -- that heat is so awful. You could have nothing on and be covered in perspiration.

th: For visual references, did you watch any movies -- such as Django Unchained or the PBS documentary Solomon Northup's Odyssey (aka Half Slave, Half Free)?

PN: No. I don't agree on a lot of stuff. I don't think you want to copy anybody.

Photo 7: Photo of Patricia Norris and Steve McQueen on the set of "12 Years a Slave," courtesy of Fox Searchlight Pictures.

Photo 9: Costume for Chiwetel Ejiofor's Solomon Northup as a slave in "12 Years a Slave." Sketch by Patricia Norris courtesy of Fox Searchlight Pictures.