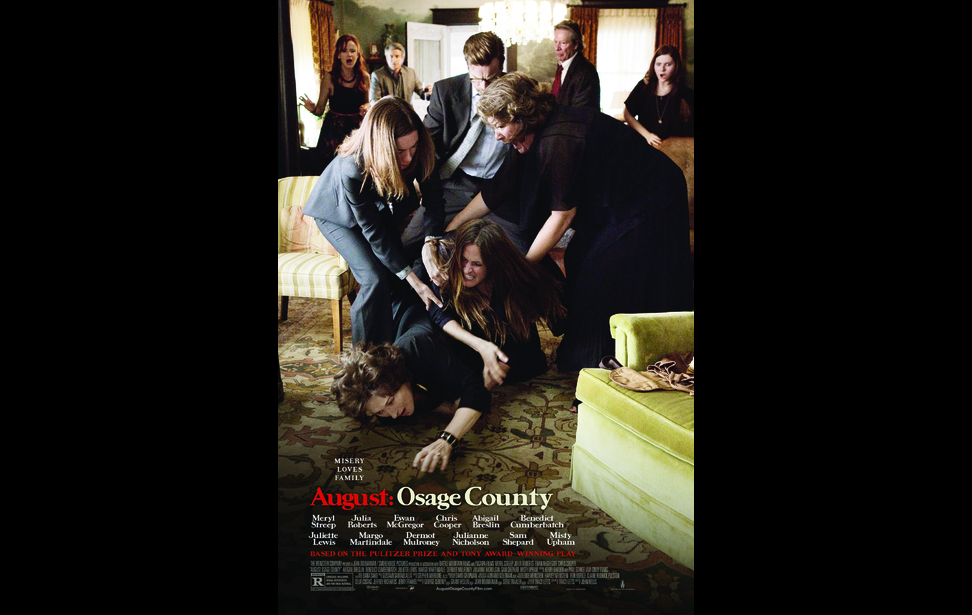 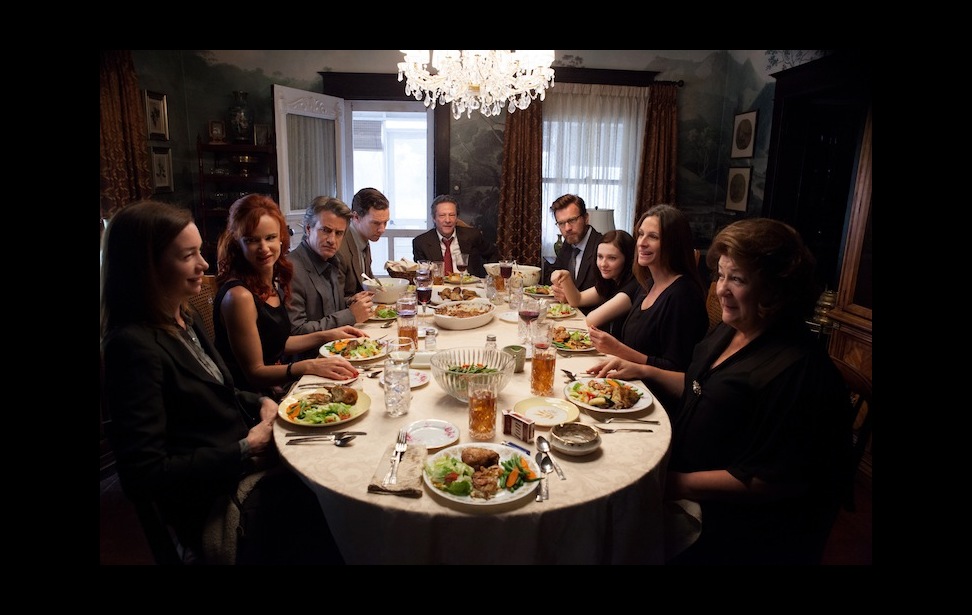 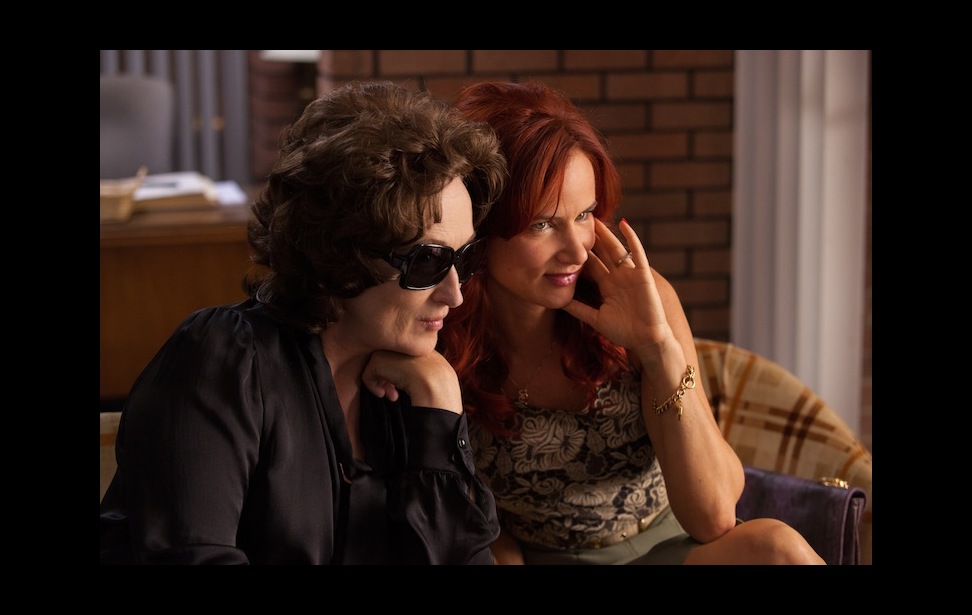 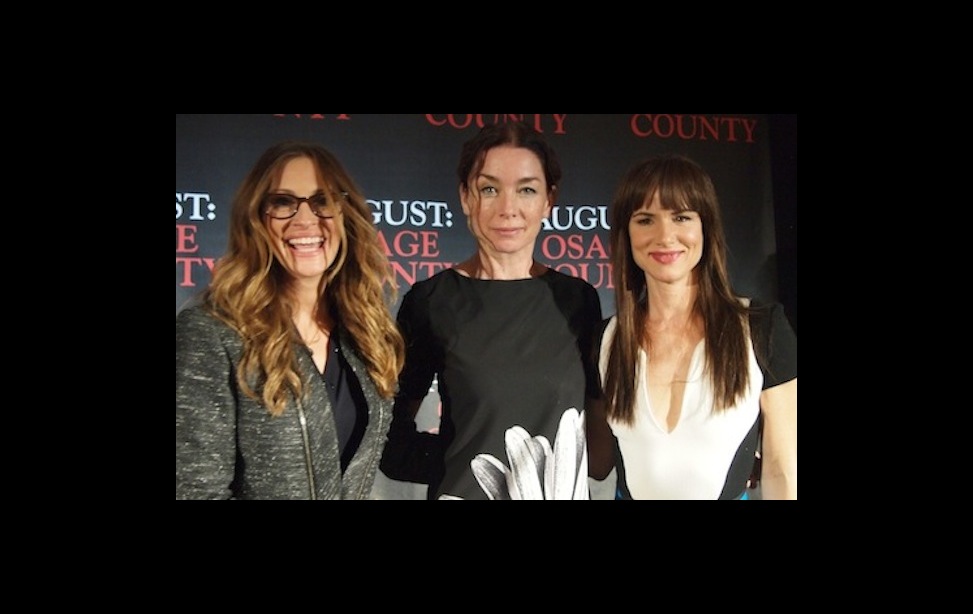 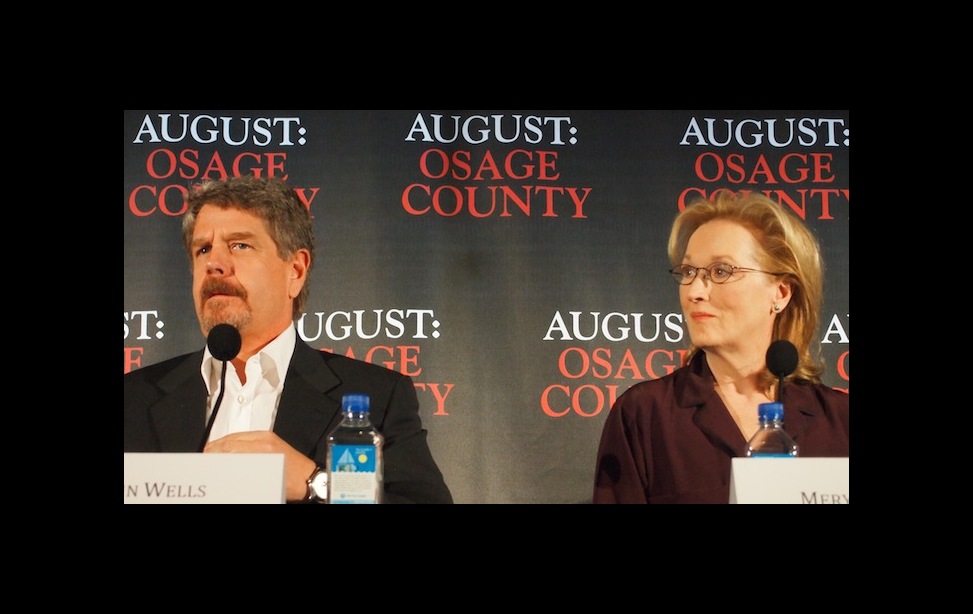 Pity the poor soul who doesn't come away from August: Osage County thinking, "I guess my family isn't so bad after all." John Wells' screen adaptation of the Tony Award- and Pulitzer Prize-winning play by Tracy Letts gathers an Oklahoma clan for one harrowing truth serum bender that will leave the performers who play them -- and the audience -- hungover for days (as seen in photo 1).

The film is an actor's showcase, and show the cases it does. Sam Shepard makes a brief but crucial appearance as poet and paterfamilias Beverly Weston, beginning with his T.S. Eliot citation, “Life is very long.” Were Bev as fond of his wife Violet as of drinking, his own longevity may have stretched a bit. But after turning over Violet's care to a hired hand, he goes missing, soon to be dredged up in a nearby lake. As Bev points out before nudging his fate, "the punch line" of his marriage is that his fork-tongued, pill-popping spouse suffers from mouth cancer.

Who's Afraid of Violet Weston? Nearly everyone, including it seems Meryl Streep, who plays her. "As an actor you're supposed to want to go into the house of pain over and over and over again, but really, it's not something that's fun," Streep acknowledged at a recent press conference in New York. "I initially resisted doing the part because...on so many levels -- physically, mentally, spiritually, emotionally -- Violet is enraged and/or in pain or drugged." To prep for the role, the triple- Oscar winner mapped out "where (Violet) was in her pain killer cycle in any given scene...just so I'd know what level of attention or inattention I could bring to my fellow actors," she said.

That attention runs the gamut from ranting to raging as the Westons assemble for Bev's funeral and last rites. "Nothing gets by me," growls Vi behind bug eye sunglasses and the wig she sometimes wears over what's left of her chemo-ed tufts. "We never know what's coming at us and that keeps us on our toes," remarked Chris Cooper about performing alongside Streep. Cooper plays Violet's sensitive, if none-too-bright brother-in-law, married to her sister Mattie Fae (Margo Martindale), the family member who most dodges Vi's wrath.

The three adult Weston daughters, their partners and mutli-generational relatives aren't so spared upon crowding into the big-little house on the prairie. There's Barbara (Julia Roberts), who arrives with her alienated husband Bill (Ewan McGregor) and defiant teen daughter Jean (Abigail Breslin). As the eldest, Barbara is the most apt to take on -- and turn into -- her mother. The middle sister, Ivy (Julianne Nicholson), has stayed around to serve as that mother's caregiver at the expense of her own personal life. Now the musty spinster is carrying on with her first cousin “Little” Charles (Benedict Cumberbatch), a secret that gives way to a sudsier revelation. Karen (Juliette Lewis), the baby of the family, sashays in with her dubious fiancé Steve (Dermot Mulroney), a shady Florida businessman with relationship ethics to match. Karen is programmed to appease, though she's either too ditsy or self-deluding to see the futility (as seen in photos 2 & 3).

To approximate a dysfunctional family, the cast lived together in townhouses in Osage County. Recalled Roberts, "By the time we began filming, I felt very familiar and entangled with these girls in a way that seemed correct for sisters. There were even "a couple of appropriate sisterly, like, 'Really? That's what you're wearing?' kind of moments with them,' " she joked (as seen in photo 4).

The Weston homestead itself played a dramatic role. "It's actually quite claustrophobic to be out in these small homes in the middle of these vast landscapes," noted Wells, adding that the storied structure featured in the film suggested "a place where everyone is stuck and a long way away from everyone else."

That house is haunted by Violet's backstory. The witchy widow came up in violence and deprivation, and still connects to loved ones through abuse. Streep took her cue from Shepard in order to enter such a mindset. It was "brutal" to "realize that he'd rather be dead than look at me...and that set the tone for me dealing with his death and afterwards," she said.

As mommy dearest lashes out at her victims, the heat of August: Osage County can at times grow unbearable. Making matters sweatier still, Violet has no monopoly on the histrionics. In scenes when the cast appears to have sprung from a telenovela, the film borders on camp, letting us laugh with -- or at -- the milked spectacle.

Letts, who fashioned the script from his play, made sure to seed it with humor. "As long as you're laughing, you're listening," he observed. Wells chimed in, "The humor is what allows the characters to progress. That's the way that in my family the tension was always dealt with." Before Wells first met with the August: Osage County scribe, he watched a video of the Broadway production, noting where the audience laughed and preserving all but two of those spots in the film.

Streep (as seen in photo 5), for her part, lobbied the director to expand her bits of comic relief. Pondering the purpose of storytelling, she waxed philosophical, "You tell a story that was not funny when you were there, but in the telling, it's fabulous. And that's how you transform your life."

Why was Letts drawn to this tale of three conflicted sisters? Knitting his eyebrows, Letts told thalo.com, "I don't know what's so evocative about siblings or sisters." But just as quickly, he located the humor in the moment and laughed, "I don't know!"