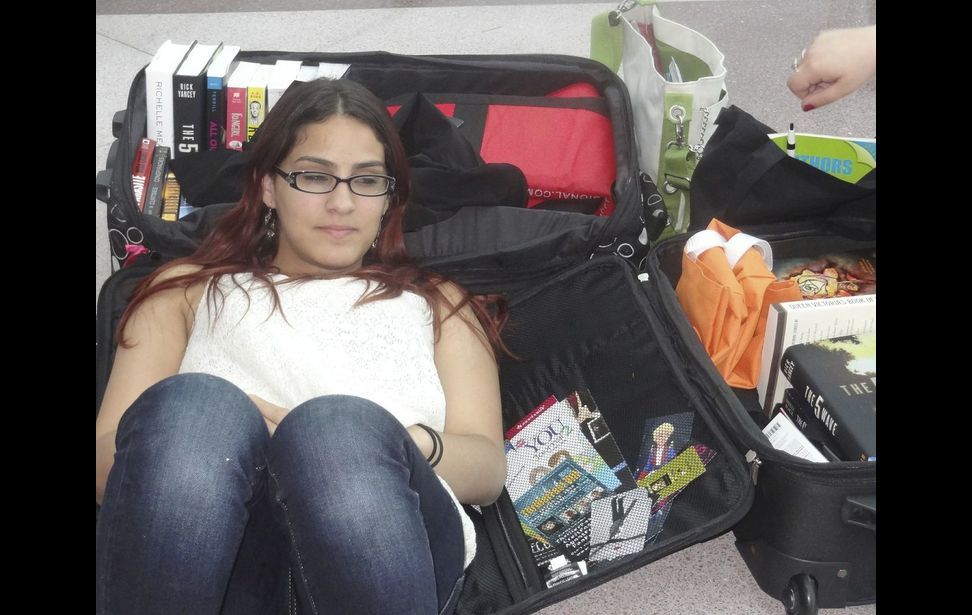 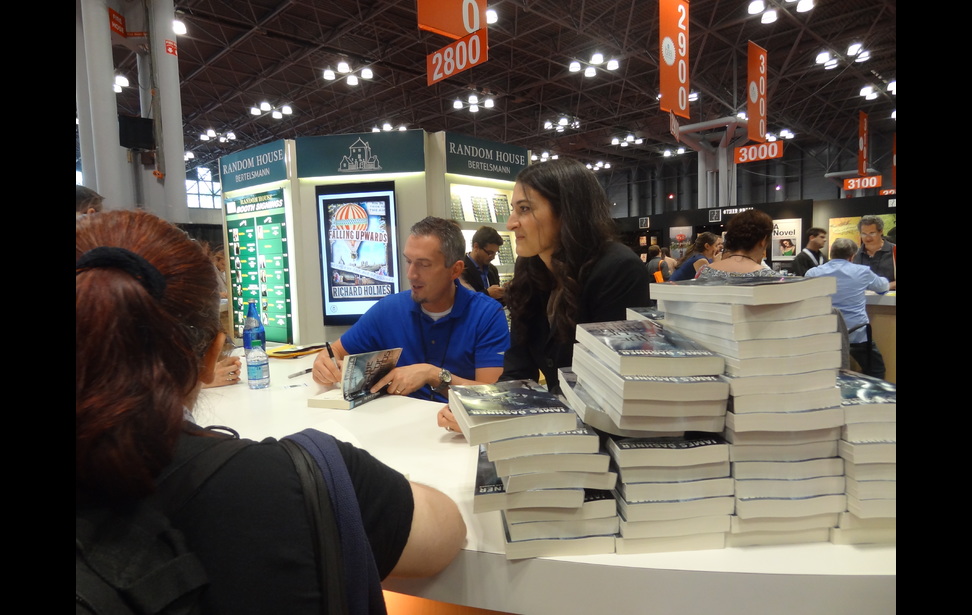 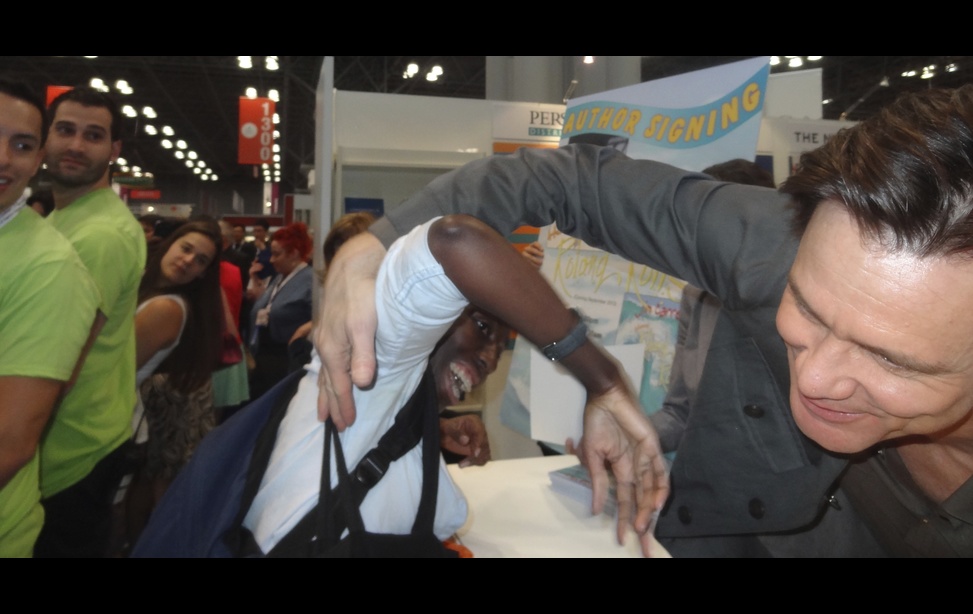 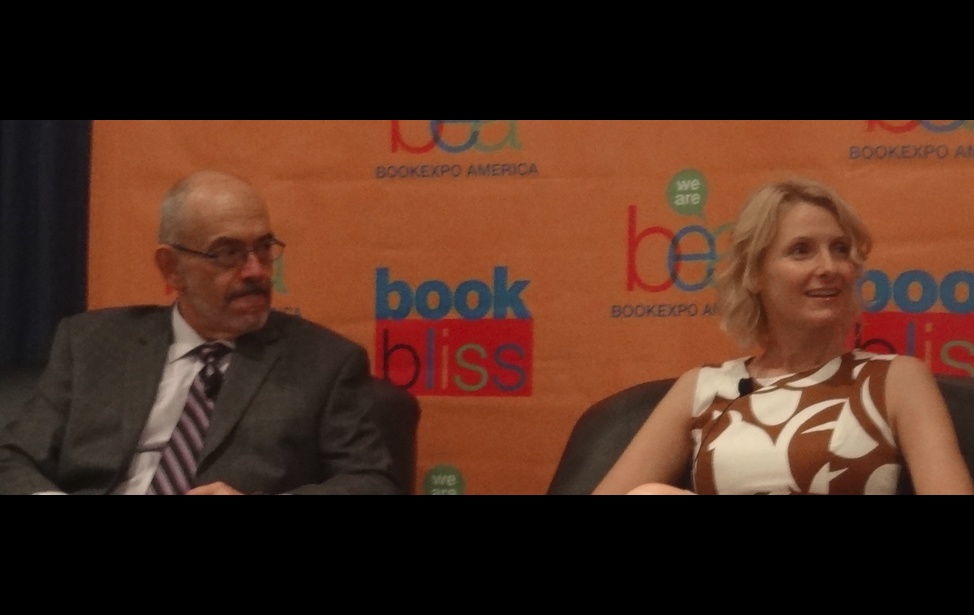 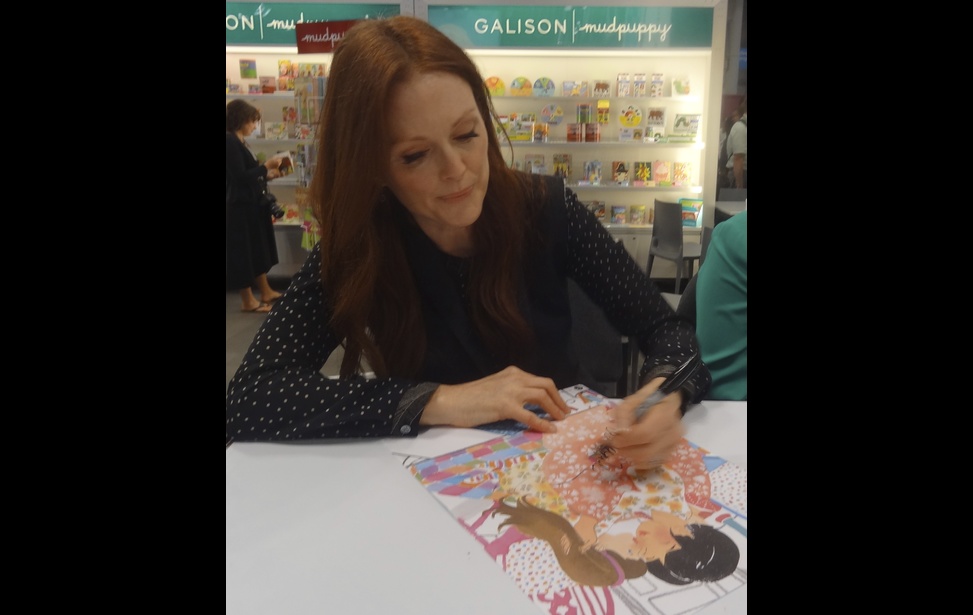 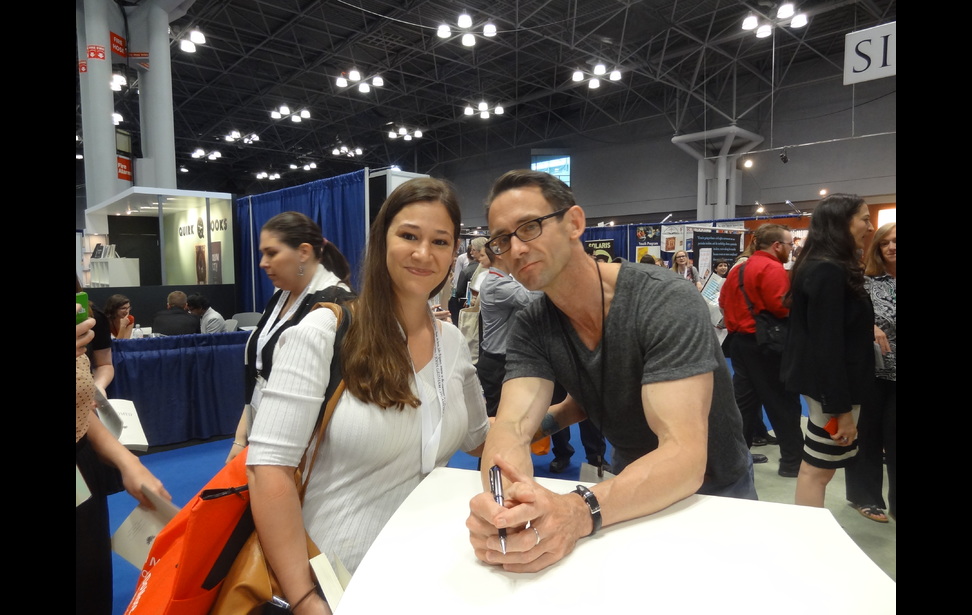 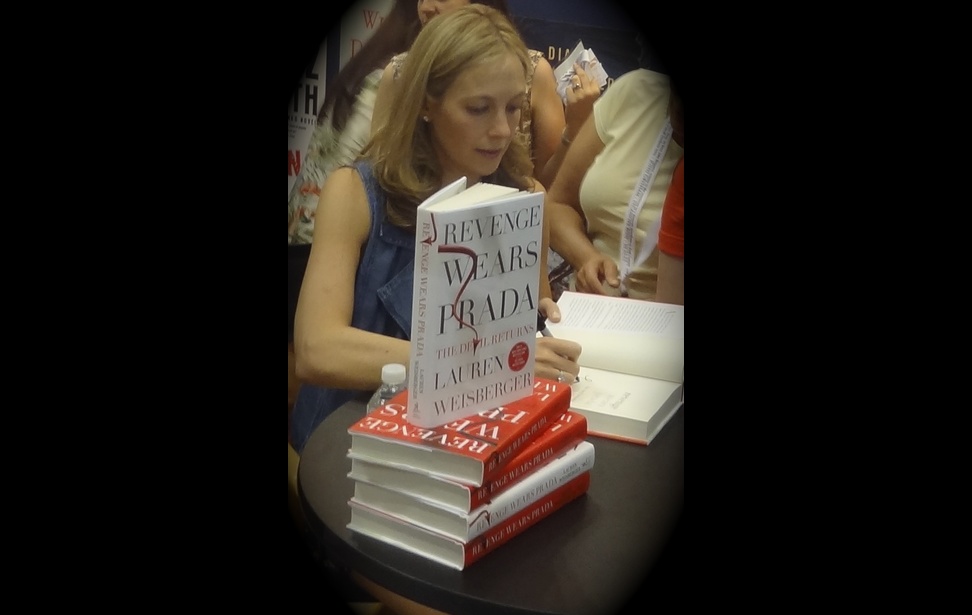 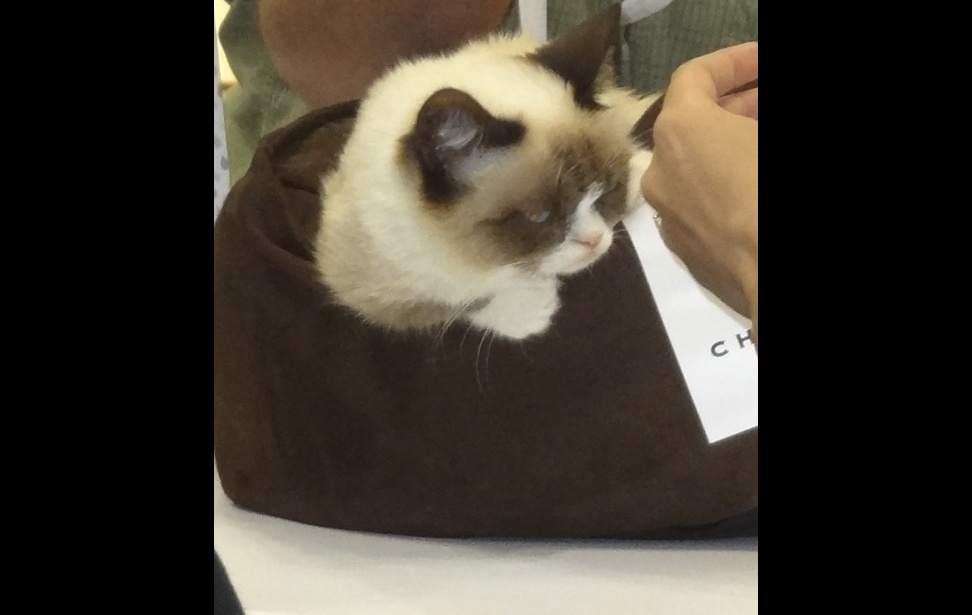 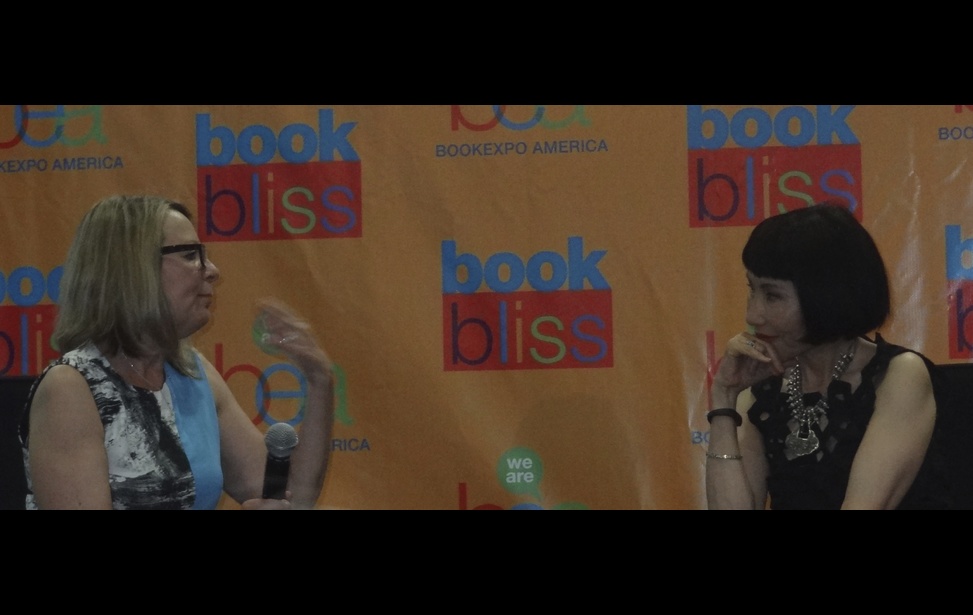 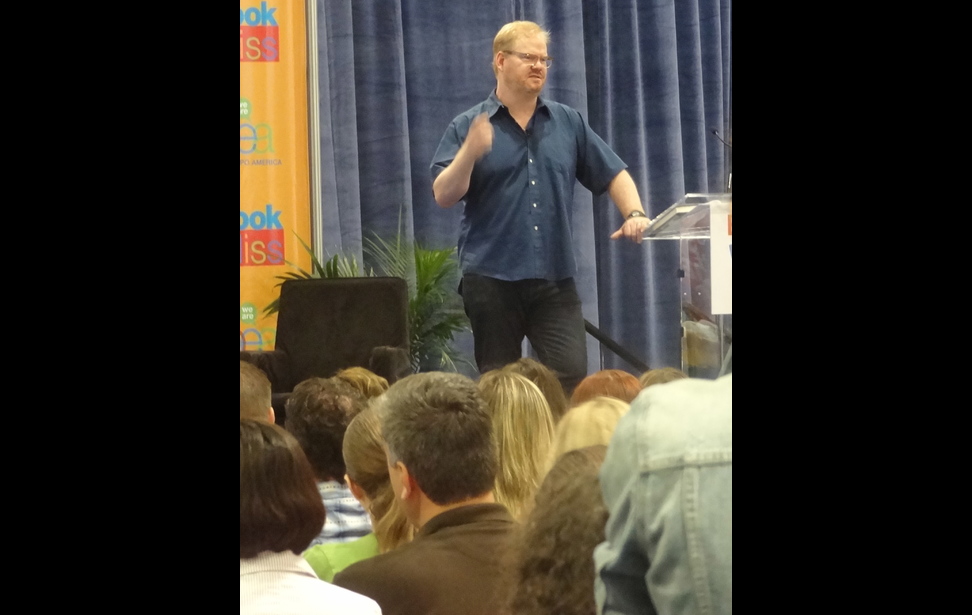 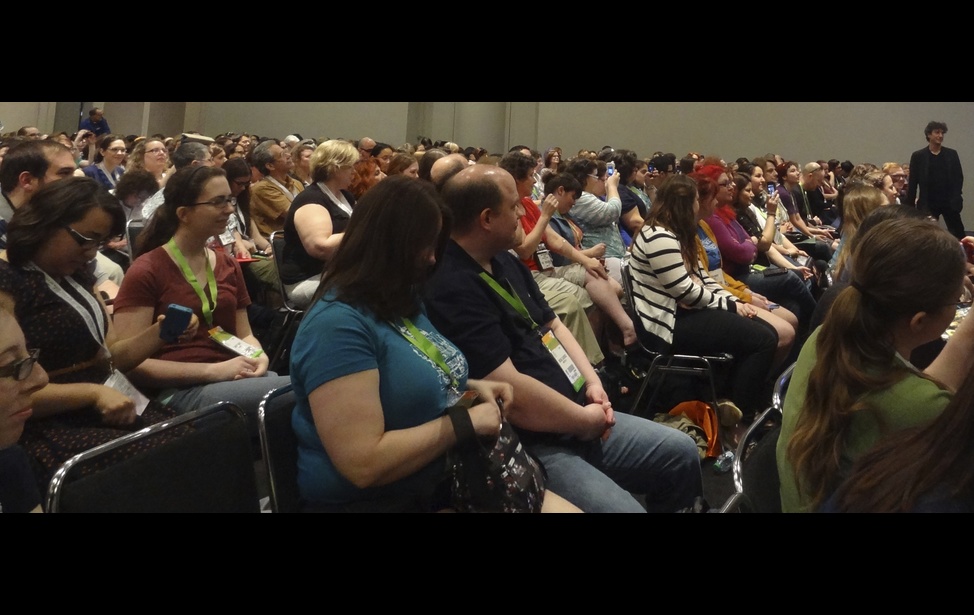 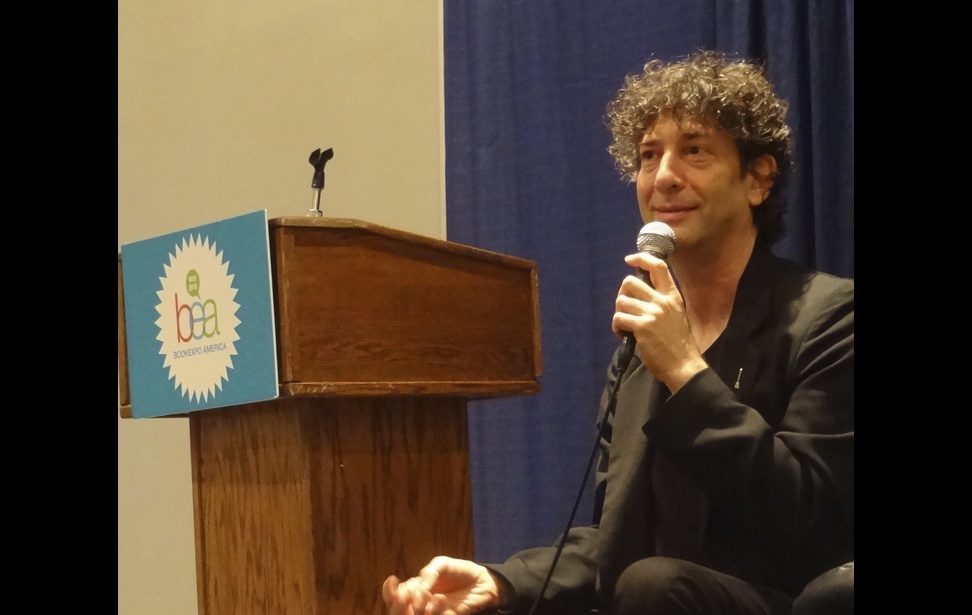 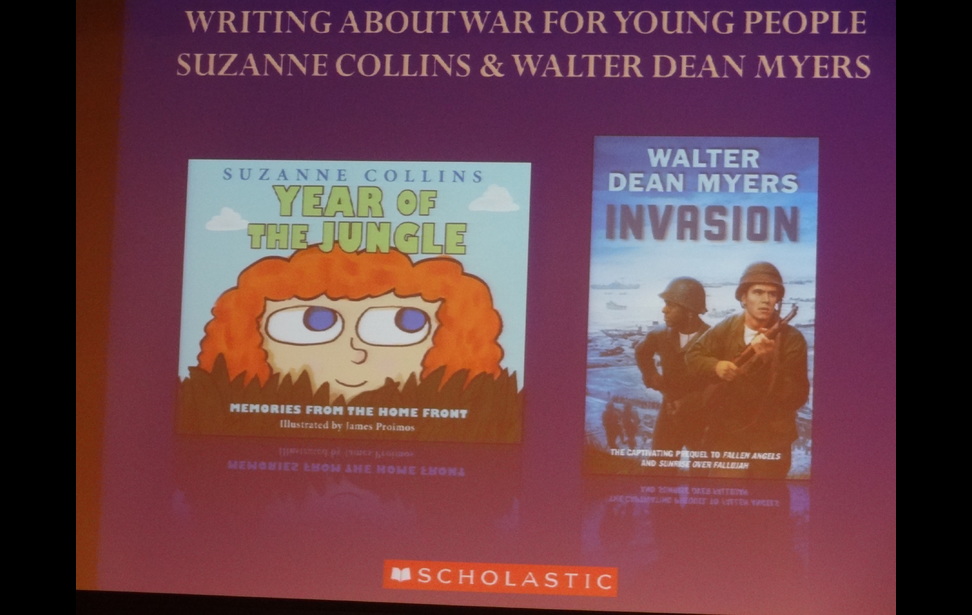 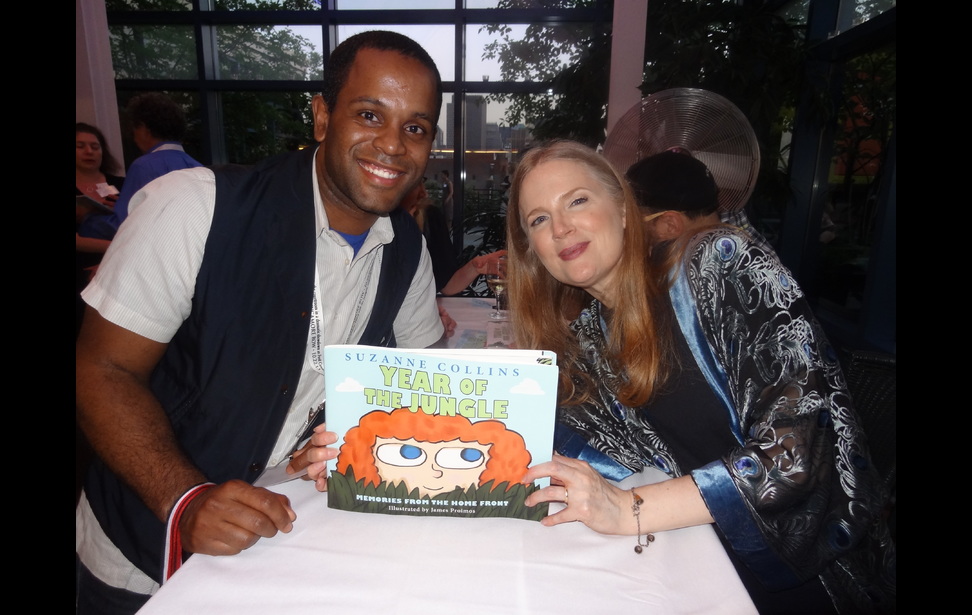 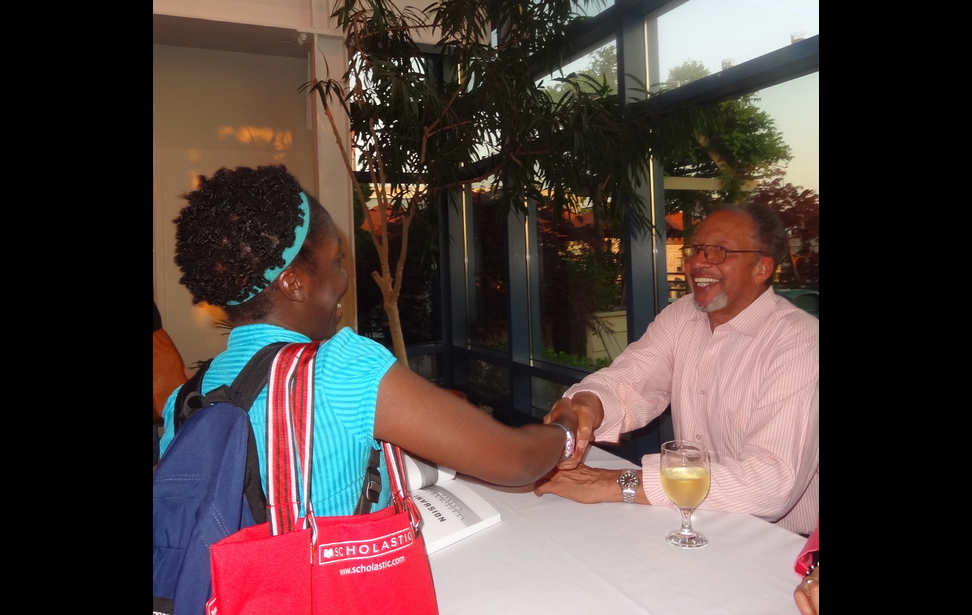 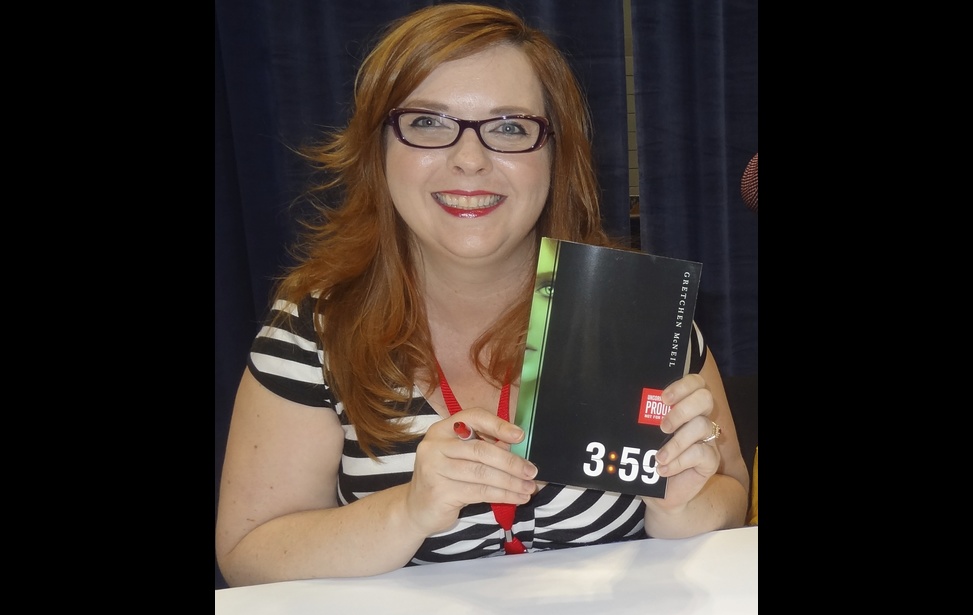 Everyone loves free swag (as seen in photo 1). But free books handed to you by your favorite authors? As Twitter handle @LDMontanino tweeted: “@BookExpoAmerica is like Wonka land for reader/writer!”

Multiple author events and talks went on simultaneously on three different stages and in a plethora of conference rooms. Author Amy Tan discussed her health issues and her latest novel The Valley of Amazement (November 2013) with O Magazine books editor Leigh Haber (as seen in photo 10). Comedian Jim Gaffigan made attendees laugh as he interviewed himself about his life, comedy, and book Dad is Fat (May 2013) before opening up questions to the audience (as seen in photo 11).

Featured events, like Neil Gaiman’s lecture “Why Fiction is Dangerous” (as seen in photo 12-13), sold out hours in advance as attendees lined up outside conference rooms as early as four hours prior to start time. Neil Gaiman graciously signed 1,000 books so that the first 500 attendees received copies of his children’s book Fortunately, the Milk (September 2013), and his commencement address at Philadelphia’s University of the Arts, entitled Make Good Art (May 2013).

How do you choose what to see? No one can be in two places at once! Yes, you can. BEA has gone digital and it helped to plug in. BEA’s new mobile application allowed attendees to digitally organize their itineraries. With live streaming, attendees watched events as they stood in line for others. Attendees who followed @BookExpoAmerica on Twitter received insider access to impromptu events—like Jim Carrey’s last-minute appearance (as seen in photo 14) to sign posters for his upcoming children’s picture book How Roland Rolls (September 2013).

Missed an event? BEA event videos will be up on their site for the remainder of the year.

As the BEA ended each day, after parties sprouted all over the city. Scholastic held an exclusive author talk with Suzanne Collins (Hunger Games) and Walter Dean Myers (Monster), moderated by David Levithan, at Scholastic headquarters. The topic? Writing books about war for children (as seen in photo 15). Collins talked about her experience with war at the age of six when her father went off to Vietnam and read from her picture book The Year of the Jungle, illustrated by James Proimos (September 2013). Myers discussed his desire to debunk the romanticism and propaganda surrounding war and read from his young adult novel Invasion (September 2013). Collins, Proimos, and Myers signed books afterwards (as seen in photos 16-17) and mingled with guests over glasses of wine and gourmet hors d'oeuvres.

Young adult horror/thriller writer, Gretchen McNeil (as seen in photo 18) has participated in the BEA for the past three years. This year, she signed copies of her latest novel 3:59 (September 2013). Says McNeil: “…the wide-eyed wonder still hasn't worn off. I'm equal parts fan and author, dazzled by the heady mix of celebrities and authors, and amazed every single time someone knows who I am. My favorite part is catching up with authors and bloggers that I only see once a year! It's like a publishing reunion.”

Book blogger and editor Jennifer Baker’s first experience with BEA was eleven years ago as an undergrad. She volunteered in the autograph area. Says Baker, “After working in the publishing industry for 10 years, I see the ebbs and flows of the business. As someone attending for professional and personal aspects, I get giddy myself meeting authors, standing in line, speaking to other publishers about their trends and methods, and being introduced to new work that will make me a fan of new and established authors.

“To me, BEA represents the dream conference for avid readers and people who would spend money on books rather than anything else. These are my people. Every year, I am reminded that the industry is solid, even when the numbers do not show that. Words printed on paper or flashed on an e-reader still mean the world to people. There are a lot of readers out there and BEA is proof of that.”

The BEA will be located in New York for the next two years before heading to Chicago in 2016. Start planning now. For more information, check out their website: BookExpoAmerica.com. BEA is the Best Event Always for booklovers everywhere.

All photos courtesy of © Sera Rivers

Photo 5: Wally Lamb (We Are Water, October 2013) and Elizabeth Gilbert (The Signature of All Things, (October 2013) talk about their upcoming books

Photo 6: Julianne Moore signs posters to promote her picture book My Mom Is a Foreigner But Not to Me (August 2013)

Photo 7: Chuck Palahniuk poses for a photo with Sera Rivers during a signing of Doomed (October 2013)

Photo 11: Jim Gaffigan discusses the origins behind his book Dad is Fat (May 2013)

Photo 12: Neil Gaiman’s sold out lecture “Why Fiction is Dangerous”

Photo 16: Suzanne Collins poses with TV journalist Duarte Geraldino during a signing of Year of the Jungle (September 2013)