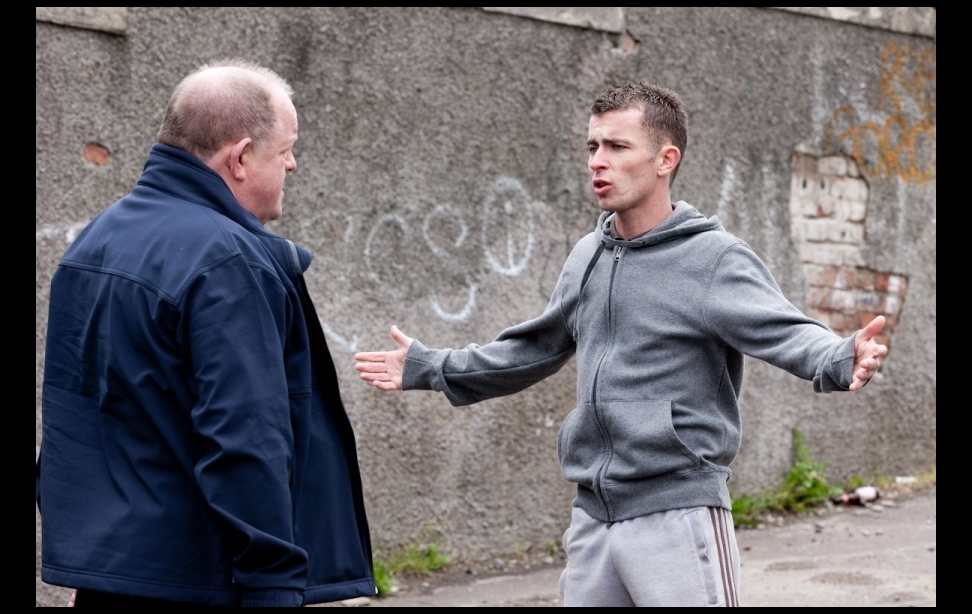 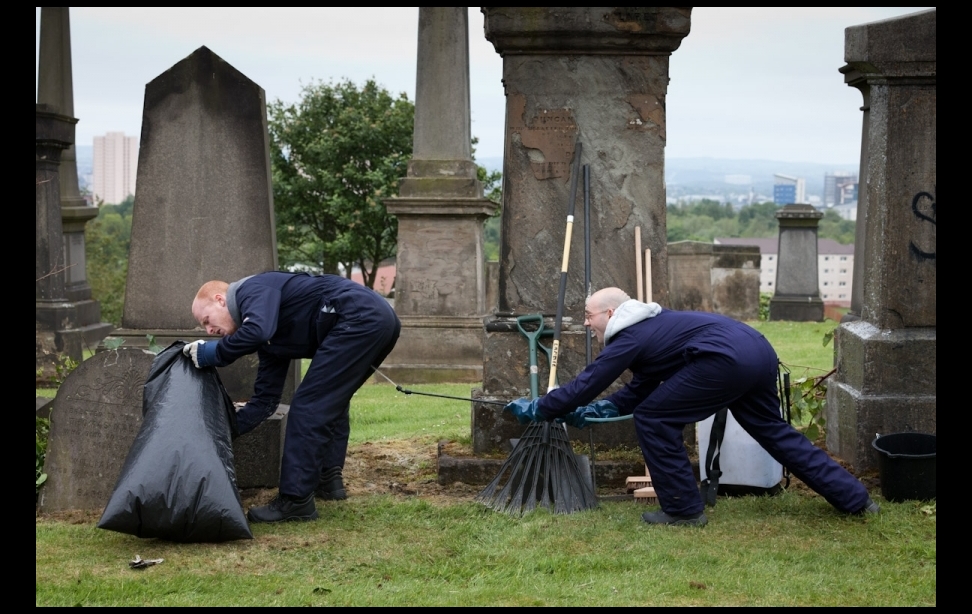 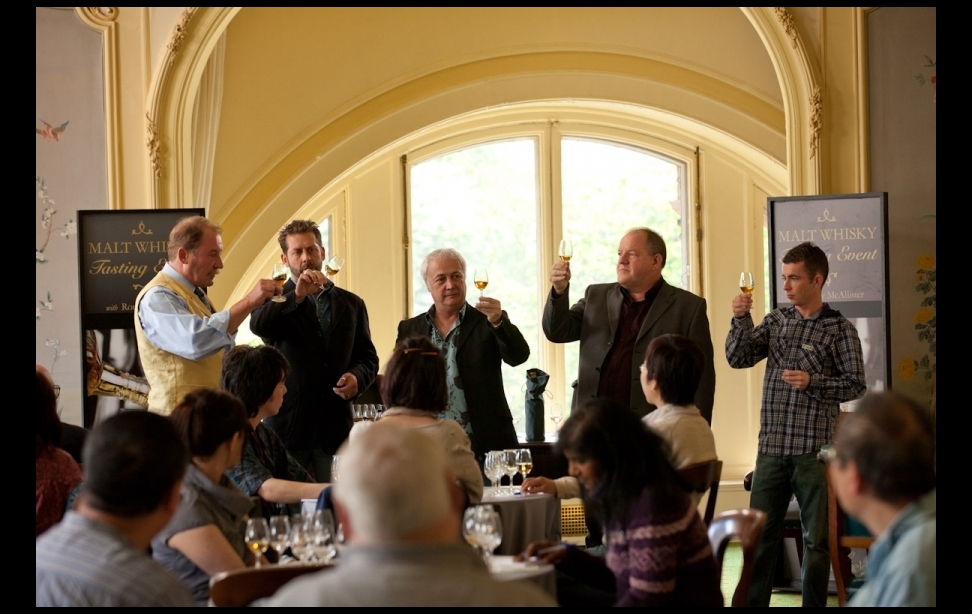 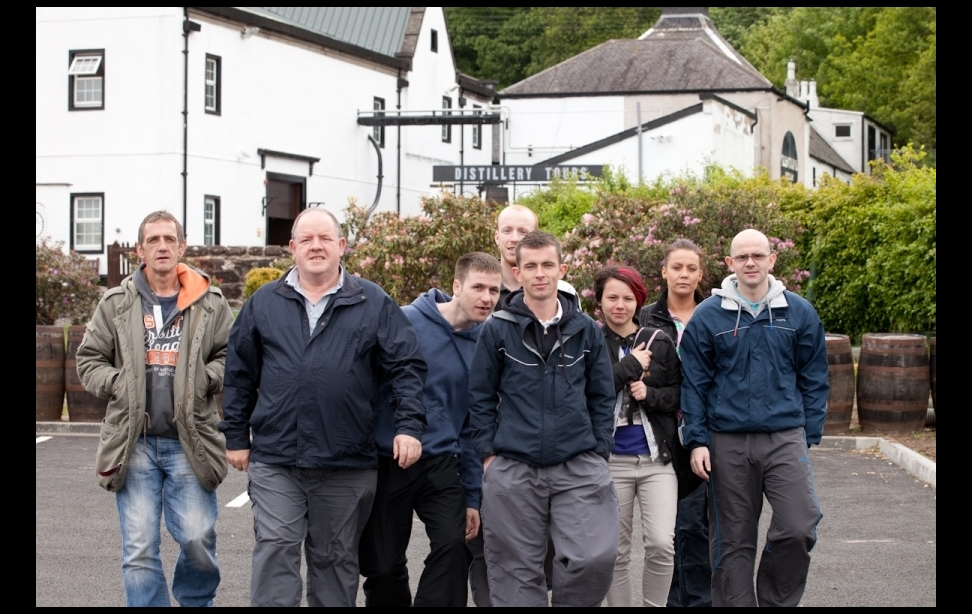 BELGRADE, SERBIA – There has recently been a premiere of The Angels` Share, the latest movie directed by British director Ken Loach, at the Belgrade International Film Festival. It was received eagerly by Serbian audience, as well as other films by this author, prevalently because of their deep understanding of his accurate working class portrayal.

The Angels’ Share (as seen in photos 1- 4) is slightly unusual work in the filmography of Ken Loach because of its amazing humour and noteworthy happy ending. The movie is still recognizably Loachian, the author has not abandoned his trademark. Bleakness of Scottish daily life and the hardship of working class on streets of Glasgow are not extruded from his focus of interest. The main characters, juvenile delinquents Robbie, Rhino, Alber and Mo, meet each other on a community service and think up a fraud with whisky. It would, so they hope, solve their financial problems.

Tackling the issues of unemployment, despair and widespread violence as consequence of the lack of financial security, importantly shapes socio-political background of this bittersweet comedy. Context is thus political and so very Loachian, even if somewhat less obvious than in his previous movies Irish Route or The Wind That Shakes the Barley. However, one other aspect of the movie has even greater social implications than the context itself. It is director` s choice to hire untrained actors for the cast.

The main character Robbie is remarkably played by Paul Brannigan who debuted in this movie. Brannigan is not a trained actor, he was chosen for the cast mainly because of his background. His growing up was rough, connected with drugs and violence, very similar to the character he plays in the film. Writer Paul Laverty met him at the community centre where he was working on a project called the Community Initiative to Reduce Violence. The Angels’ Share has significant documentary values in this regard. Reality and fiction overlap, acting is deeply based on reality; it comes from reality in a very particular way. Concerning this, Brannigan says: “I’ve never had any training as an actor so I just decided to go with my instinct, my feelings. Having so much experience through my life in every kind of situation you could possibly think of - that helped me.” (quoted in the press kit for The Angels’ Share).

Apart from bringing appealing authenticity to dramatic representation, this specific documentarity reveals the outstanding power of dramatic art; it shows its healing potentials. Acting can be the very basis for self awareness and also for understanding of the outside world. It is not a coincidence that acting is used as the core of psychodrama and psychotherapy. Brannigan confirms this notion: “It’s been like therapy in a way. You think about the issues in the film and it reminds you how things were and what you’ve got now. It keeps your feet on the ground” (quoted in the press kit). Acting is sometimes defined as presenting one of the possibilities or models of reality. It can be said that in this movie it presents the possibility of healing and of taking a road to change. Acting saved Brannigan` s life by helping him to find the right path.

Title The Angels’ Share serves as a compelling metaphor. It poetically refers to soul of the whisky: angels` share is a small amount of whisky that evaporates during the aging process. It is a lyrical expression implying the idea of spirituality and transcendentality of whisky, and its potentials to transform the base matter into the stuff of dreams. It is reminiscent of Charles Baudelaire`s and Joanne Harris` sensitive reflections on the soul of the wine. Title The Angels’ Share may also refer to change of Robbie` s lifestyle and his marvelous persistence in making his life more valuable and solemn. After all, this is the movie about new chances and fresh starts, about endless possibilities in life, forgiveness and redemption. It is what art is all about: to help us discover and express the best parts of ourselves.