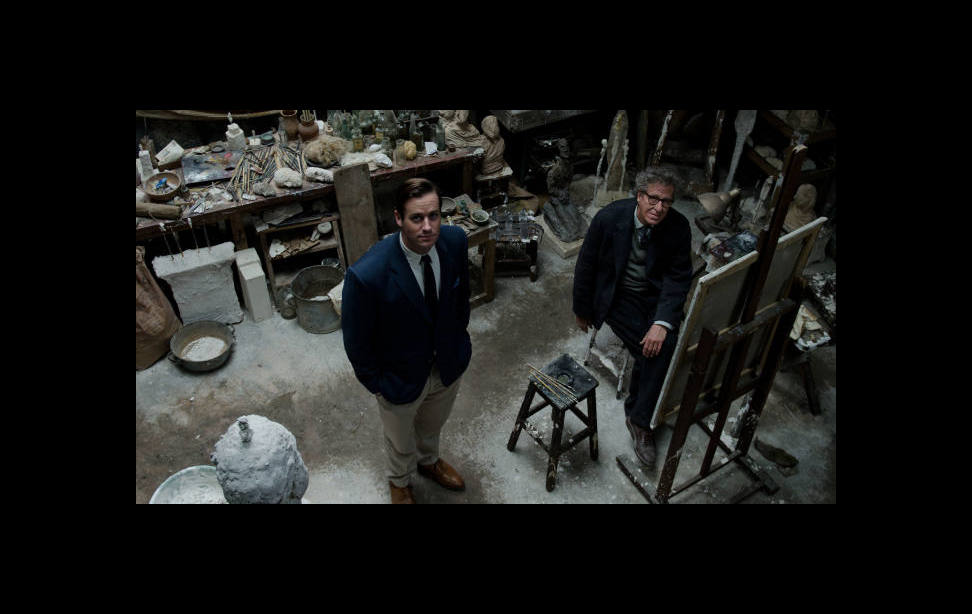 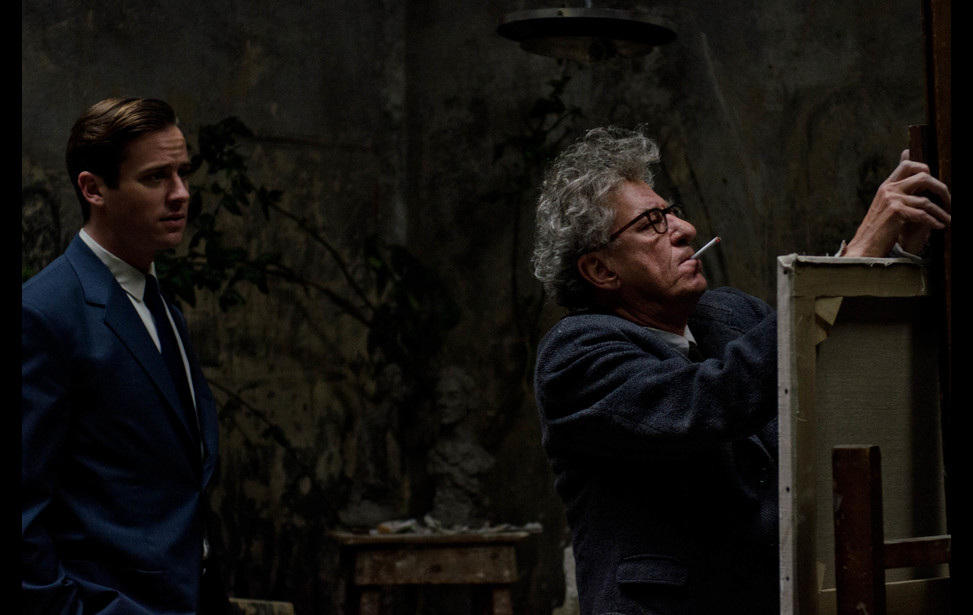 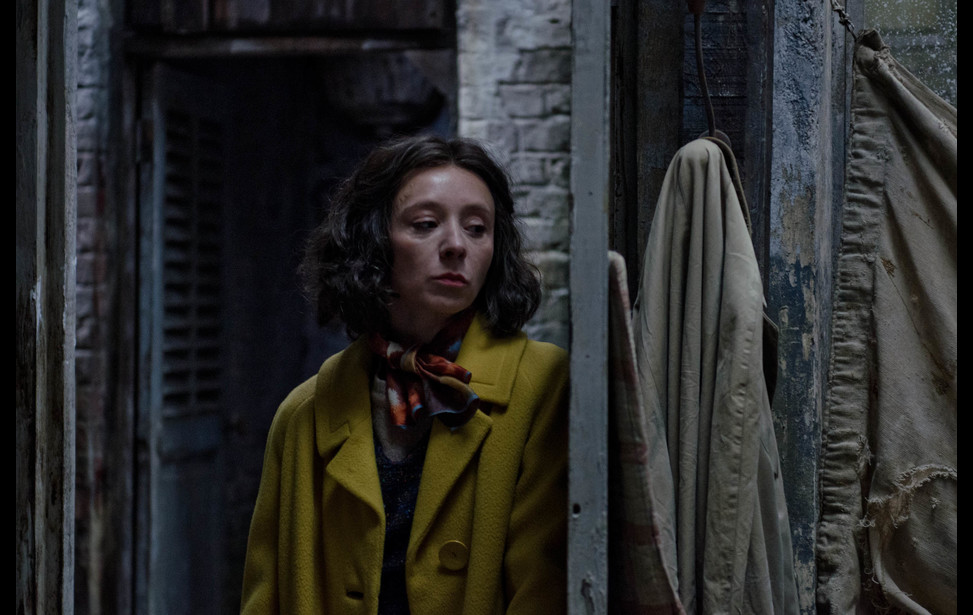 Final Portrait is an artist’s studio tour and you’re on the invite list. The artist is Swiss sculptor, painter, draughtsman and printmaker Alberto Giacometti, and the studio, as writer Jean Genet put it, is “a milky swamp, a seething dump, a genuine ditch.” Plaster busts and bony figures haunt the space amidst a mess of tools and splatters. It’d be downright spooky were it not for the creative spirit infusing the ruins.

That legendary Montparnasse hovel is where Stanley Tucci’s new film largely unfolds. It’s 1964, two years before Giacometti’s death, as the 60-something artist (Geoffrey Rush) tries to capture the American art critic James Lord (Armie Hammer) on canvas. What’s supposed to be “an afternoon at most” goes on for 18 nerve-fraying days.

Like a modern-day Penelope weaving and unravelling, Giacometti repeatedly paints – and paints over – Lord’s portrait. He no more means to complete it than he ascribes meaning to doing so. Nor is he settled about his creative powers. “We must go on. I can’t go on,” the artist declares with Beckettian iffiness. As the session stretches on, Lord cancels flights if not expectations.

“My brother can only be happy when he’s desperate,” observes Giacometti’s sibling and right-hand man Diego (Tony Shalhoub). This paradox may also govern the artist’s obsession with prostitute slash muse Caroline (Clémence Poesy) that drives his wife Annette (Sylvie Testud) to take a lover of her own.

The saga behind the portrait, which Giacometti begifted Lord and which in 2015 sold for more than $20 million, is drawn from Lord’s memoir A Giacometti Portrait. To learn the saga behind visualizing Final Portrait, thalo.com speaks with production designer James Merifield, known for features including The Deep Blue Sea, Austenland, The Life and Adventures of Nicholas Nickleby, Sense and Sensibility and Little Dorrit.

Ask the Emmy Award-winning craftsman about reconstructing Alberto Giacometti’s art studio, and he’ll take you to a secret vault. There, underneath the Saint-Denis suburb of Paris, the Swiss artist’s works are stashed alongside choice studio furnishings.

Skyping from London, Merifield replays the moment of discovery. “We went down what seemed like a zillion elevators to get to the vault and we walked through the double door and there was a mausoleum of Giacometti’s works,” he remembers of his early foray with Tucci. “There within this vault were elements from his studio: his easel; his stool; his cupboard – all of which I replicated.” Two years after the fact, there’s no mistaking the designer’s awe.

I press him about the “mausoleum” conceit, because it’s an association that kept coming to mind while I was watching the film. He explains that the sculptures were packed in a way that allowed the “lids of the coffins” to be removed and the pieces, revealed. Later in our conversation he returns to the coffin motif, now in reference to the crating of the finished portrait towards the end of the film. “We wanted to create these parallels to what was going on with Giacometti and where he was headed,” Merifield says by way of acknowledging a whiff of death hanging over the set. That the route to Giacometti’s favorite cafés leads through Montparnasse cemetery only accentuates the hints of the macabre.

Feeling out another inference, my next question concerns the array of vertical figures that suggest prison bars. Merifield replies, “I wanted it to feel that the studio was somewhere Giacometti might never escape from. His best work came out of a dark, dank space, with no heating. You see that his wife has to beg to have a fire. She’s standing there naked, poor woman. It was a monk’s cell.”

The designer continues, “James Lord sat for hour upon hour, day upon day. The story is so much about these two heads just talking to each other and occasionally a ‘third head,’ which is the big bust you see. It is about the purgatory of being painted by Giacometti -- the sheer pain and frustration. Then Giacometti goes and rubs it all out! You’ve got to feel that Lord could go insane in that space like in a cell.”

No wonder purgatory was yet another analogy I drew from the pit of works in suspended progress. Yet for all its mortifications, the artist’s studio is also a birthplace of inspiration. Which is why Merifield “wanted to make it feel like an emotional space where Giacometti could create his extraordinary works.” This basic tension shows up in the color palette and set dressing.

“Tonally we went with this sepia, grey, monochromatic work,” says Merifield as he delves into the magic ink of his visual storytelling. “But there was a plant behind Giacometti’s easel that had taken root out of the ground because it was so wet in there. So there are signs of growth, regeneration, nature, renewal -- all those things that his work ultimately symbolizes. I wanted to say that in a sublimated way with this plant.”

Where needed, Merifield took liberties with the studio blueprints. For the movie-ready version, built in London’s Twickenham Studios, the bedroom faces the workspace and is separated by a glass wall. It’s also roomier than the original, which at 75 ½ square feet would have left little space for the camera to maneuver. But beyond any practical advantages, the makeover dramatizes the pageantry of shifting relationships. It plays up a game of reflections with “the wife appearing through the window whilst looking on at Giacometti in the studio with his lover.”

Asked what else the reflections muster, Merifield offers, “They underline a psychological moment. Seeing a reflection of Giacometti and James Lord with that enormous sculpted head – it’s almost like a wall or a mirror between the two of them -- you get their parallel lives divided by that very present profile. The glass is literally mirroring what’s happening in the scene.”

Made of “recycled bits of glass,” the surface gives off “a fragmented image so that you get a sense of someone walking through bars,” adds Merifield. “I wanted to suggest that you go into that space and it is a fragmented world: You don’t know if you’re going to come out alive.”

The fate of Lord’s portrait seems no less murky. Which brings us to a key theme: that Giacometti struggled with the concept of perfectability or, as his friend Jean-Paul Sartre put it, with the “insistent search for the absolute.” Ironically, the constraints of the London-based production had Merified and his team channeling the artist’s methods. “We only had a six-week period to create Giacometti’s world from the start of production to shooting,” he recalls. “All of the paintings and sculptures had to be made in a very limited time, so that forced us to work rather like Giacometti in terms of making sculptures that were incredibly spontaneous and often very repetitive.” And all this under the tight scrutiny of the Giacometti Foundation, which duly vetted the accuracy of the reproductions.

Fortunately for the filmmakers, the Foundation shared privileged research beyond the cache of photographs publicly accessible in magazines such as Harper’s Bazaar, Vogue and Queen as well as in archives by photographers including Robert Doisneau and Brassaï. A team of fine artists led by “the hand of Giacometti,” Rohan Harris, cloned everything from canvases to a graffiti-like mural to a paneled cupboard adorned with the image of a face. Whether 2-D works or sculptures such as The Walking Man (which comically doubles as a coat hook), the knock-offs were so convincing that the Foundation demanded they be destroyed after the shoot. Otherwise, they risked ending up on the black market, as had been the case with three of the reclaimed fakes on loan from the Foundation and featured onscreen.

Recreating Paris in London -- although nothing to be smuggled -- came with its own set of challenges. Merifield knew from past experience that the Greenwich Maritime College could pass for chic Parisian haunts, and special effects took care of the Seine. Bermondsey stood in for the area surrounding Giacometti’s Rue Hippolyte-Maindron studio, which Merifield built on the Twickenham stage. “But the moment the car drives away, you’re on location,” says the designer. “That’s what we’re paid to do: to make believe.”