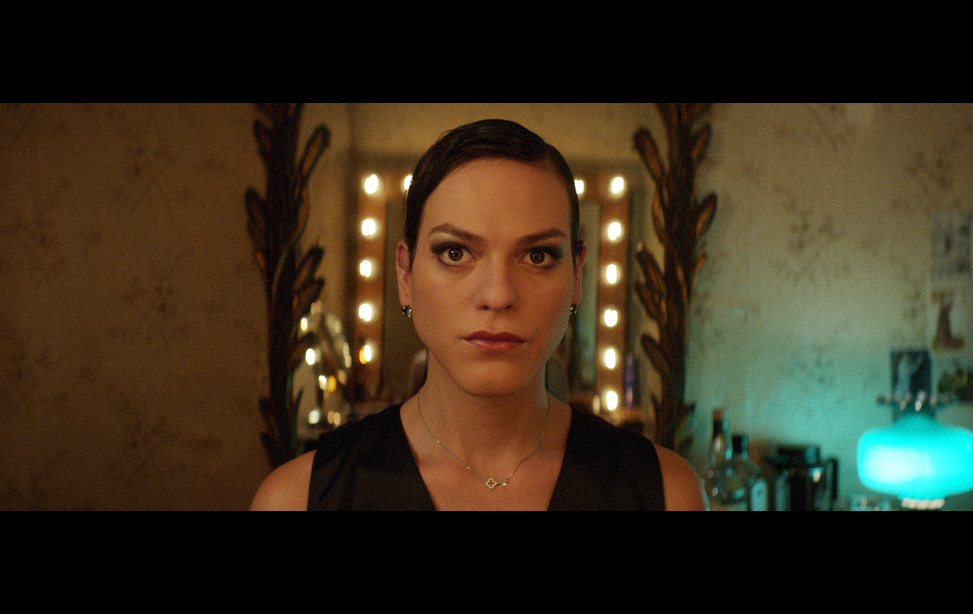 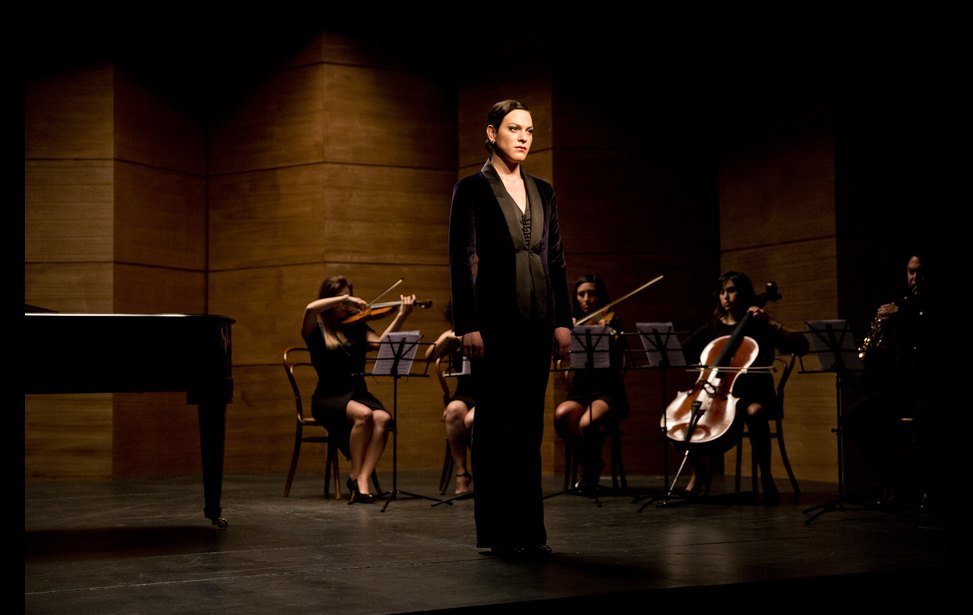 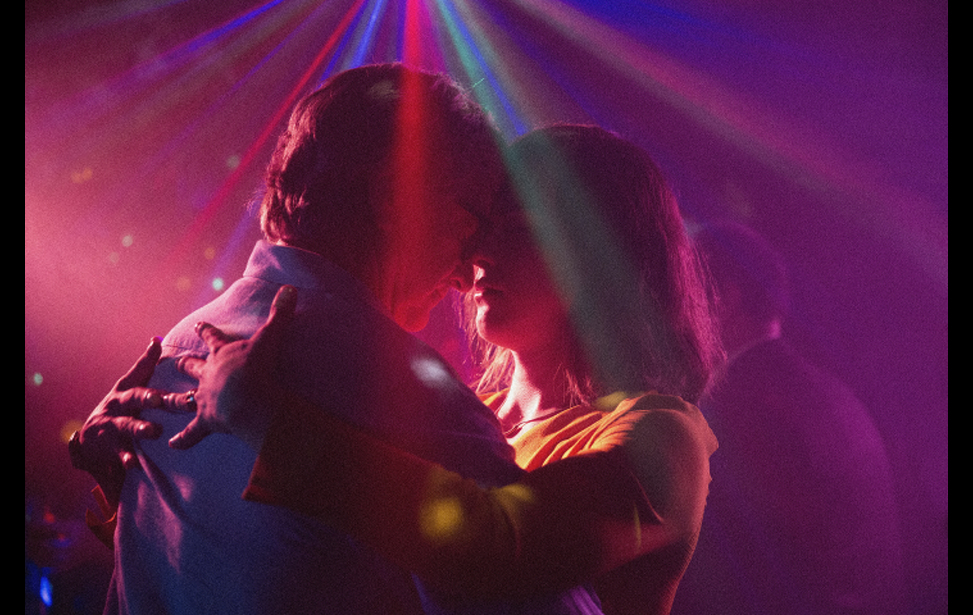 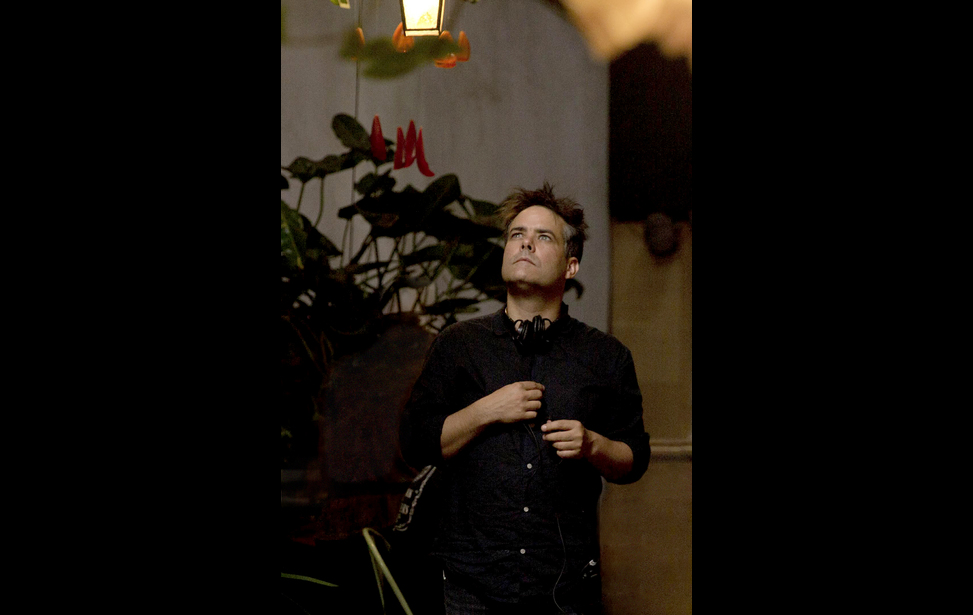 Forget “character is destiny.” A Fantastic Woman goes one better: character as aesthetic destiny. With a trans actress playing a trans woman, the challenge for filmmaker Sebastián Lelio was to unfold “a being in flux” in both form and content. His solution? A hybrid work that encompasses elements of romance, mystery, fantasy, musical and social exposé. Punsters will appreciate that the Spanish word genero means both “gender” and “genre,” just as the film itself can be called transgender and transgenre.

The title A Fantastic Woman also plays on its words. It references the fabulousness of daytime waitress and after-hours singer Marina Vidal (Daniela Vega) as well as her projected identy as a construct of her beholders’ imaginations. And that’s not just because she’s a trans woman who triggers diverse emotions about her transformation, even within herself. The double entendre slips past the surface narrative and into murkier depths.

“The film is a game of resonances,” affirms Lelio during our recent sit down in New York. As soon as the Chilean director enters the room, his high-voltage eyes invoke the escape clause of cinema. Everything is illumination to this romantic visionary; he speaks deliberately but passionately, as if channeling revelation from beyond.

Which may be why his new Oscar-shortlisted film conjures spiritual dimensions over its literal plot. It’s tempting to pick out underworld motifs, even if they’ve only bubbled up from Lelio’s unconscious. If extinguishing one persona and emerging as another suggests an afterlife, what better source than mythology to help visualize a transgender journey?

First a bit about that journey: It begins with 57-year-old Orlando (Francisco Reyes) lying corpselike in a dimly lit Santiago sauna and later ransacking his textile imports office for the tickets to Iguazú Falls he got as a birthday gift for his 30-something girlfriend Marina. No luck, but after picking her up at the lounge where she performs salsa standards, he gives her an airfare voucher over a celebratory dinner. That night Orlando has an aneurysm and incurs contusions as he falls in the stairwell. Orlando’s brother Gapo (Luis Gnecco) meets Marina at the hospital, where her lover has been pronounced dead. She bolts, only to be returned by the police. Treated like a suspect by the powers that be and bullied by Orlando’s family, Marina must fight for her right to lament her lover’s passing while also finding her path ahead without him. Spoiler alert: Her path leads to radiant art.

“It’s the story of a character who goes through a process of suffering and purification, and in the end she is in a different level of consciousness,” says Lelio. “Down deep this is the story of the birth of an artist. So she goes to the underworld to rescue her beloved one and she comes back maybe with nothing, maybe with some kind of knowledge. But all that suffering, all those humiliations and struggles lead her to that moment of the sublime through singing.”

“What you’re seeing is more than what you’re seeing, and you’re projecting upon the projection of the film,” says Lelio of the many mirrors, glass panes, fountains and other reflecting surfaces that fill the screen. When pressed about the inspiration behind these prismatic levels of imagery, he offers, “We talked about the metaphor of the circles of Dante’s Inferno… but there was an element that connected the story with mythology more than with Dante.”

“There are different physical levels that the characters can inhabit,” Lelio adds with a nod to the profusion of stairs and doors suggesting otherworldly recesssions. “The sauna and crematorium are all underground, and when Marina is more free and light, she can fly.” More about that winged ascent further into our chat, which begins with an exploration of opening shots:

Sebastián Lelio: Strangely enough, the image of the waterfalls was always there. Since the very beginning that was one of the first things that manifested.

thalo: Even before you knew it was a transgender film?

SL: Yes. It was called Iguazú. There was something about the power of the waterfalls that called to me. Then later on the film started to shift into what it ended up being, but that opening image was always there and it remained as a central element of the film’s identity.

th: And here I thought it was the perfect image of gender fluidity and straddling boundaries. Had I asked what Iguazú Falls signified for you at that early phase, how would you have answered?

SL: The unstoppable force of life that exists, period, beyond right or wrong.

th: Meaning that nature cannot be judged because it is perfection, itself?--or perhaps imperfection?

SL: I would say it is perfection with all its violence and contradictions and ferocity and darkness. There’s something there that says, How dare you judge nature!

th: And then, once Daniela Vega came on board, what effect did you envision her having on the viewer?

SL: That her cinematic presence will trigger your fantasies, fears and desires, because it’s ungraspable in a certain way.

th: We start with Orlando’s POV and see Marina through his loving gaze. Next Orlando dies and Marina becomes the protagonist. Why did you feel we needed the auspices of a straight male to first experience her?

SL: When you change how you look at things, the things you look at change. So it was important to start with this Hitchcockian game of a false protagonist. It’s very Psycho in a way. It’s a film about a man with a very old-fashioned masculinity. The first time we see Marina, we are looking at her through him with a loving regard. By the time we learn everything else, the whole game of, What are you seeing? starts to operate. Towards the end, the intention was to offer the spectator enough space to find a place of empathy towards Marina and even to deeply care about her without any assistance. To complete the circle.

th: How do the contrasts in lighting help bring the story around? -- from atmospheric color, to documentary hospital white, to surreal strobing, to cosmic black, to bright redemptive illumination, for example.

SL: One of the first ideas was to do this film with the raw light of social realism à la Dardennes. But that wasn’t subersive enough. So I thought, Let’s make a flamboyant film, with a great calligraphy, almost classical, but let’s make a Trojan Horse. So people would sit down and they’d be watching a film which looks good, which is well told. And then suddenly, BRAAAM! the attack: There’s something inside inside the horse! And that’s a hypermodern character. Not only is it a transgender character, it’s a transgender character interpreted by a transgender actress. So that elevates everything to a dimension that creates a tension with classicism.

th: The film feels both dreamlike and real.

SL: Much of the film is in a dimension that is more mental, more other-worldly. Yet the story that her body carries is unfakable. It’s pure document. So at the heart of all this hyper-fictional construct and this polymorphic multi-tonal structure, there is a real beating heart -- and that’s Daniela. That’s the tension of the film.

th: As we watch Marina watching her reflection, we’re also watching our own reflected identity.

SL: It’s a triangular game. Cinema happens within the spectator.

th: Is that why you have Daniela break the fourth wall?

SL: The film is really self-aware. Knowing Dani and making this film about a transgender woman made me question, What is a woman? But making the film, which is the container of this subject, made me wonder, What is a film? In that sense film and character have a very subtle connection. And because of the subect, the film leaves enough space for the spectator to anayze the challenge from every possible angle and step into everyone’s shoes from the safety of the cinema chair, just to morally visit all those territories and then, almost without noticing, to decide where he or she stands. Here and there the main actress is looking at you, straight into the lens. These are the moments when the film is aware of itself and when the character is asking you, What do see? What are you projecting onto the enigma that I am?

th: One of the most loaded lines is when Orlando’s ex-wife calls Marina a “chimera.” It takes us back to those elusive tickets. Is the notion that Marina will never reach the falls a wink at unattainable nature?

SL: I knew the tickets were going to connect the unaccomplished utopia of Iguazú, but at the same time they were going to be the thing the spectator expected to be inside the locker.

So technically they’re a MacGuffin. Among all the visitations that the film pays to different genres or to things that belong just to cinema -- like the Buster Keatonish sequence when Marina is walking against the wind or the Bugsby Berkley one when she flies towards the camera -- those things are just pure cinema. They belong to that tradition. A MacGuffin is in the same realm.

th: And yet the locker key MacGuffin doesn’t bring off what it would in a Hitchkockian thriller.

SL: It’s about using this device, but sending it somewhere else. When Marina opens the locker, there’s a void, an emptiness, an absence of answers. I believe that cinema works because of the tension between information and absence of information.

th: Like music and sex. Or faith, another act of withholding and release. Which brings us to the resurrection motif.

SL: There might be a Christic element in Marina’s ordeal, in her journey. It’s a story of suffering and redemption. And she suddenly ascends to the disco ceiling.

th: At the end she reaches a state of grace through lyrical singing. Is that glittering key around her neck a token of her newfound identity?

th: There’s a connection with the key that opened the door to the void, but the new key is where her throat is, where her voice is coming from. It opens something that belongs to a more abstract or spiritual realm: music. It’s the last symbol you see in the film.

th: Together with Gloria and Disobedience, you’ve crafted a trilogy around women protagonists.