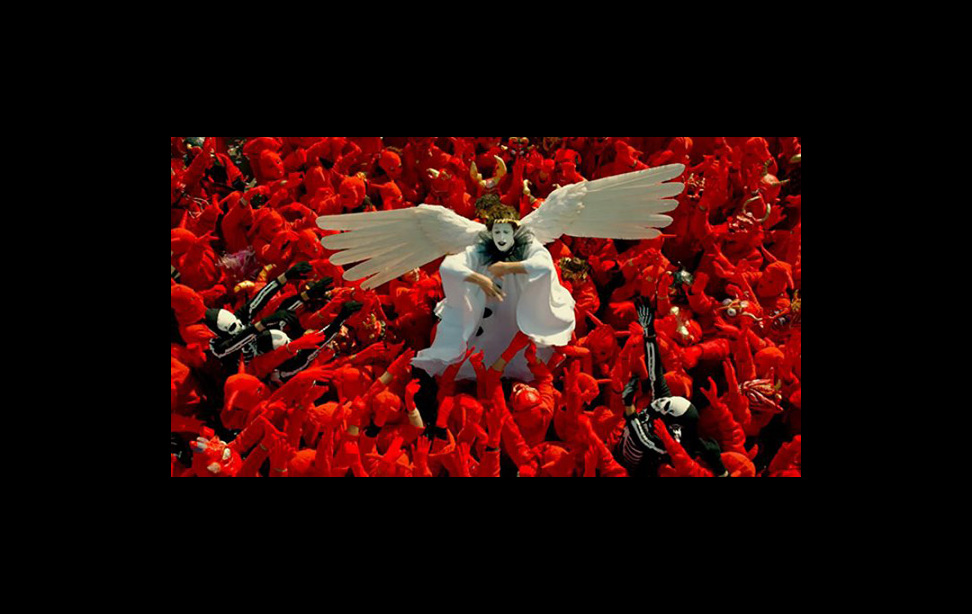 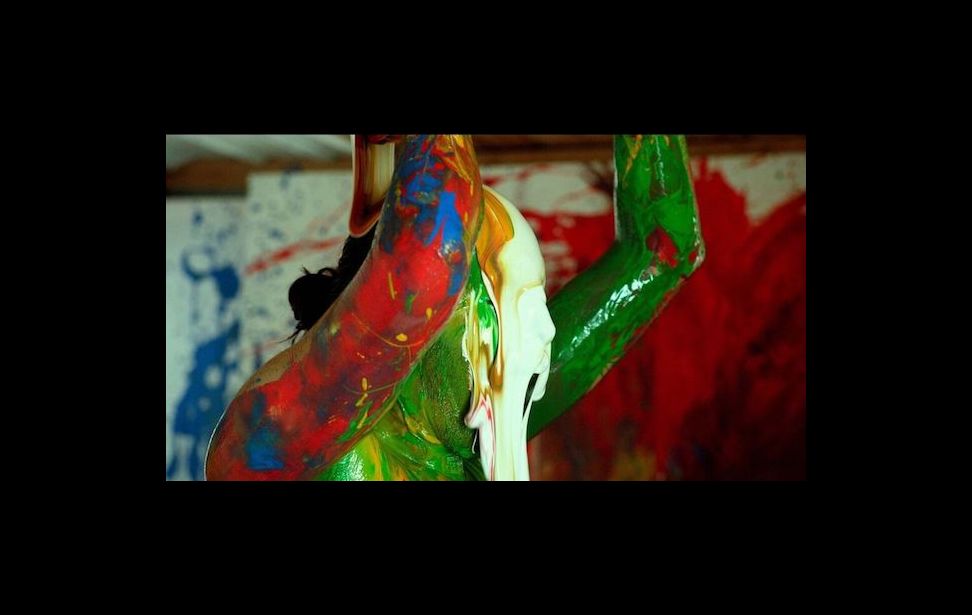 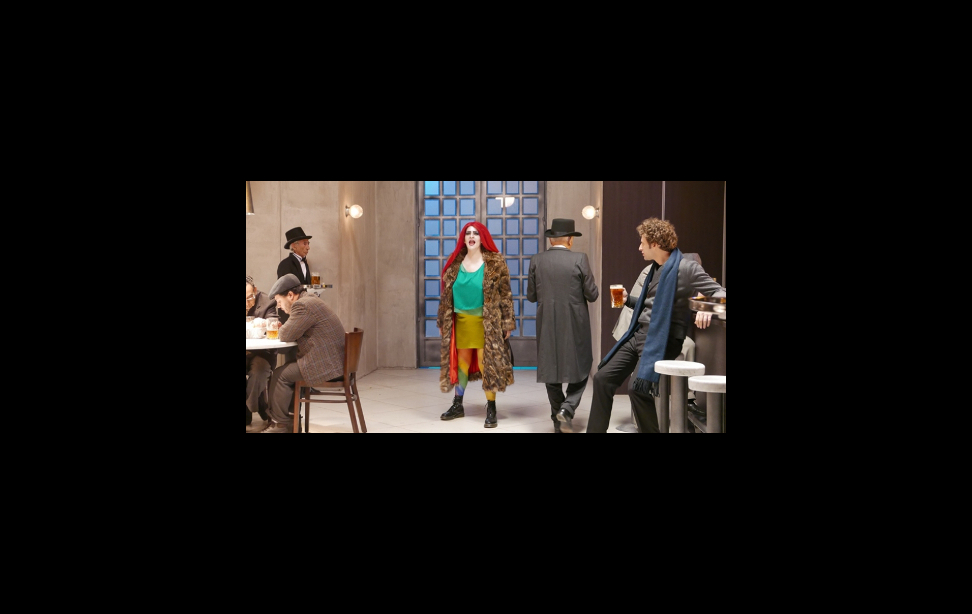 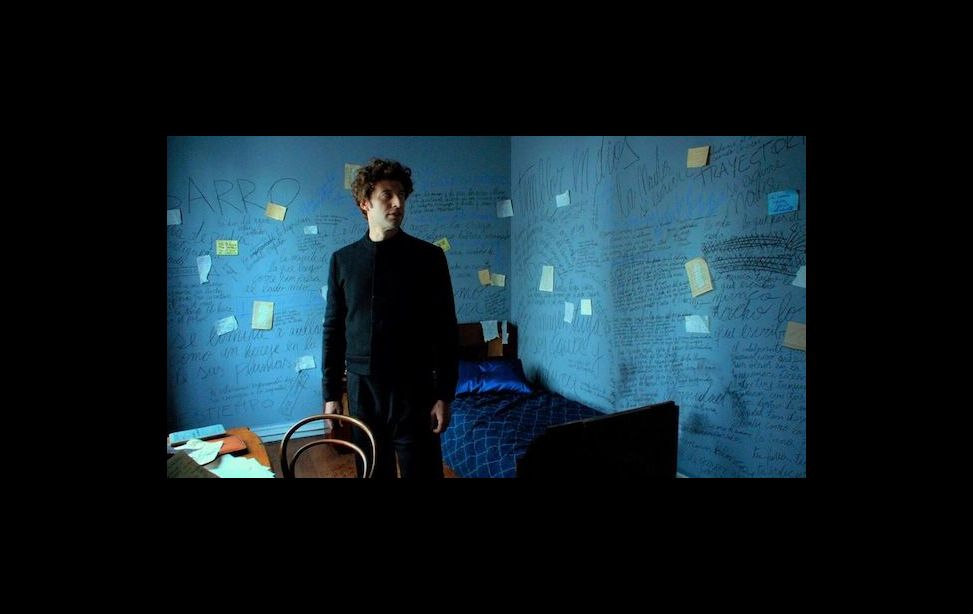 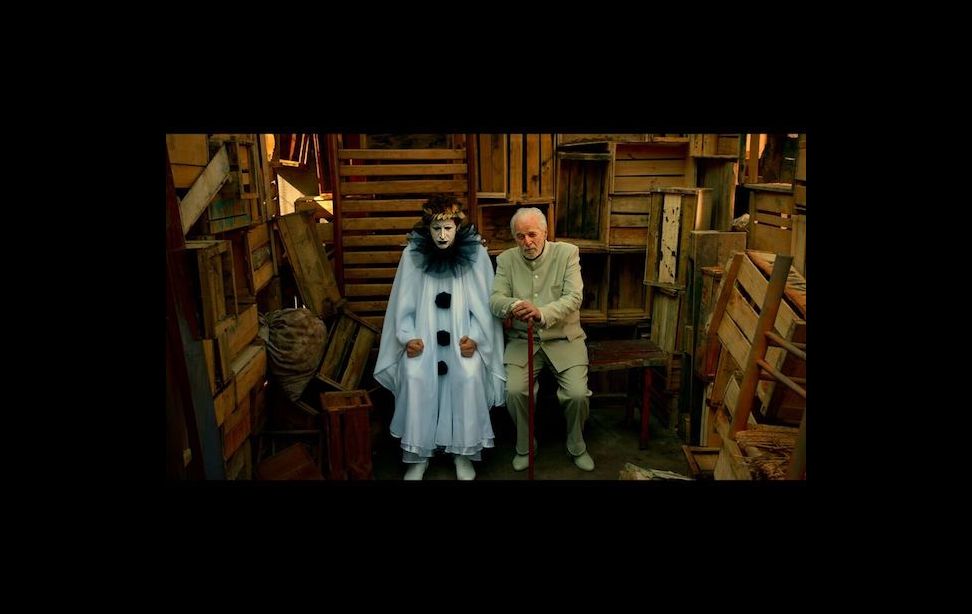 Endless Poetry (Poesía Sin Fin) marks director Alejandro Jodorowsky’s third collaboration with his preferred production designer: himself. Like his 1970s cult classics El Topo and The Holy Mountain, which he also styled, this latest extravaganza takes a phatasmagoric deep dive into poetic consciousness. It’s from that fathomless fount that the octogenarian creator reimagines his coming of age.

The second filmed memoir in a projected series of five, Endless Poetry picks up where 2013’s The Dance of Reality left off, in Chile of the late 1930s. Jeremias Herskovits once again plays the young Alejandrito, an artistic soul who chafes under the brutish, philistine ways of his father (Brontis Jodorowsky, the filmmaker’s eldest son), if not of the entire Jodorowsky clan. Any tenderness lavished on the tweener comes from his mother (Pamela Flores), who sings every line of her dialogue in operatic soprano.

From the outset Jodorowsky aligns his enterprise with the surreal. For openers, a giant paper train pulls into his hometown of Tocopillo bringing pro-fascist former president Carlos Ibáñez del Campo (Bastian Bodenhofe) back from exile. The visual antics continue as present-day buildings disappear behind life-size drawings of vintage façades. Before long, puppets, masquerades, raw meat and nude bodies of all sizes and shapes will spruce up the works. Welcome to Jodorowskyland, where the climate is nearly always theatrical.

With credits spanning stage director, cartoonist, poet, novelist, composer, actor, visual What crops up in the process is meant as much to entertain and illuminate as to heal. For Jodorowsky the narrative arc – Alejandro’s embrace of beauty and personal truth to guide his living and dying -- is only transformative if the viewer transforms along with him.

So naturally when thalo sat down with Jodorowsky during his recent visit to New York, the exchange began with the film’s climactic image (spoiler alert): a seaborne boat vanishing into the ether. Hauntingly elegiac, it follows the filmmaker’s final and most emotionally poignant onscreen intervention with his younger self. It also visualizes what Jodorowsky has elsewhere refered to as “the sea of the unconscious.”

thalo.com: In your teachings about psychomagic, you’ve described approaching “the sea of the unconscious” as a “heroic, mythical work to get to know yourself completely.” How does Endless Poetry chart this course?

Alejandro Jodorowsky: For me human life is an odyssey. But what we are searching for is our true self. Because in the beginning we are not who we are. We are a self-conception that was given to us by our family, society, culture and history. We have limits and prejudices -- like a mental cage – and we need to do a lot of work to find our happiness and to be who we really are. The picture starts like this: What the family did to you; what the situation of the country did to you; what the dicatator did to you. Who are you? You’re not living reality; you’re living according to the reactions you have to reality. I’m showing where you are, and it becomes the fight to find yourself -- who I am.

thalo: Considering the film’s last image, can we say that quest is finite or “endless”?

Alejandro Jodorowsky: In the end of Endless Poetry, you go to the ocean, you dip yourself with death in the boat because you are mortal. You only have 100 years to find yourself! You won’t have enough time. So you go into the ocean of the unconscious and continue to find yourself.

th: This sequence, like many others in Endless Poetry, has a dreamlike quality.

AJ: I make all the art myself. When I ask for an image or a camera movement, it’s like a dream. It has the freedom and density of a dream. Everything is like a painting, a movement.

th: The ambiance of Santiago nightspot Café Iris is especially trippy. What was your inspiration here?

AJ: It really looked like that. Café Iris opened at midnight and stayed open all night. All the alcoholics came there to drink and to sleep. The servers don’t move like that because it’s like a ballet, but because they’re very old, all of them. And now that I’m very old, myself, I developed it artistically into a slow movement like a dance. But really it was like that at night.

th: What gave you the idea for the floor-to-ceiling scrawlings in Enrique Lihn’s bedroom, or as he put it, his “temple”?

AJ: It was really like this. When I went to see the poet, everything was covered in his poems, all over the walls and floorboards. It was beautiful. I made it like a painting. But that was symbolic for me because he was a poet who wanted to put poetry in the whole world. He died when he was 59, but he was one of Chile’s greatest poets. He was drunk for 11 years till he died. He was my friend and he was my master. I came from a working-class family with no poetical culture. I didn’t have an artistic preparation. He came from a very cultured family.

th: On the topic of where you came from, what went into crafting Alejandrito’s Tocopillo home?

AJ: It’s the real street where I lived, and it’s the real house where I grew up. It’s exactly now how it was when I was suffering there. There’s only one moment that’s not in my house, because I constructed an imitation for the earthquake.

th: It’s tempting to think that when Alejandrito hacks the family’s backyard tree, he’s hacking his genealogy. But was it a real scene from your past, no symbolism intended?

AJ: I really chopped the tree. When I made El Topo, I killed some animals. I was 30 years old. But art is not to destroy things. In Endless Poetry I wanted to preserve the real tree. I put the hatchet in the tree and realized the tree wound in post production.

th: The bed in 20-something Alejandro’s loft is on an elevated platform. Is it meant to be a throne? An executioner’s chair?

AJ: Because the artist who really lived there made it, for a theater set. But in a way it’s to show how little Alejandro is, like a child. His maturation is broken. As you see during this period, he has the big shoes of a clown. We are going into deep childhood.

th: The clown sequences are a chromatic riot, as are the street scenes of Carnival revelers dressed as bone-white skeletons and blood-red devils. How do you determine your palette?

AJ: Commercial movies are all similar. They all have the same kind of photography. They’re trying to make reality with color. Myself, I am doing a picture. It’s not reality. It’s a dream. I open the door to the colors to express themselves.

th: But what guides your color choices, and how do you conceive them? The film is pure spectacle, from the torrents of body paint to the gold star dousing to Pequeñita’s sangre sagrada-hued walls and so many other eye-popping elements.

AJ: I’m an artist. I don’t conceive. I receive. There is no conception, only reception.

th: And you really don’t have a thought where it comes from?

AJ: From the deep unconscious. Art is not rational. I express color as a dream. It’s not reality. I want the viewer not to forget that it’s a picture. I don’t want to go inside and hypnotize the person who is seeing the picture into thinking this is reality. No! Be conscious! You’re seeing the beauty of art. That’s what I’m doing.

AJ: Your wife and costume designer Pascale (Montandon-Jodorowsky) told me you made few if any sketches, and that you create intuitively. Now I understand what she meant. Do you have a trademark visual motif?

AJ: Yes, I never put an object between the camera and the actor. Never! Because I don’t want to make aesthetic pictures. They are all about the character. Without the aid of the camera, they are nothing.

th: Is Endless Poetry or any of your other movies a homage to Federico Fellini?

AJ: No, but I knew Fellini. He called me and wanted to receive me. We had one of the shortest conversations of my life. I admired Fellini. Fellini was enormous. When I was 15 years old, he made La Strada and it changed my life. But he wanted to see me because I was showing one of my pictures in Rome. I went to him. He was shooting in an open field. Suddently I saw him coming. Then he opened his arms and said, “Jodorowsky!” And then I ran to him and said, “Papa!” We took each other in our arms. But then it started raining really hard and we ran away. And this was all. This was my conversation with Fellini!

th: But do you visually quote Fellini in your productions?

AJ: It’s different, because Fellini was the poetic nostalgia of the past. And myself, I’m searching for for the future -- who I am, when I will be myself. Formally, his freedom, my love of his movies, all of that was a great inspiration. But not the meaning of his pictures. For me it’s too in the past.

th: Who would you list as your creative influences?

AJ: I don’t follow any one person. I am me. But I admire many. For example, Tod Browning. Luis Buñuel -- Un Chien Andalou, when they cut that eye! F.W. Murnau. The silent pictures of Erich von Stroheim. Things like that. But they don’t influence me in my head. Why? Because when you’re a real poet, you admire Rilke -- you admire the great writers. But in reality you are important when you discover not that you are the best, but you discover your own way to speak. Or your own way of filming. When you become yourself. And you forget what the others are.

th: So who is the essential Alejandro Jodorowsky?

AJ: I am the son of myself. Because I can make a little image. I need to find my own way. I don’t want to be the best. I want to be different. To be me. This even goes for the camera movement and lighting. I film in my own way. Because that is creating.