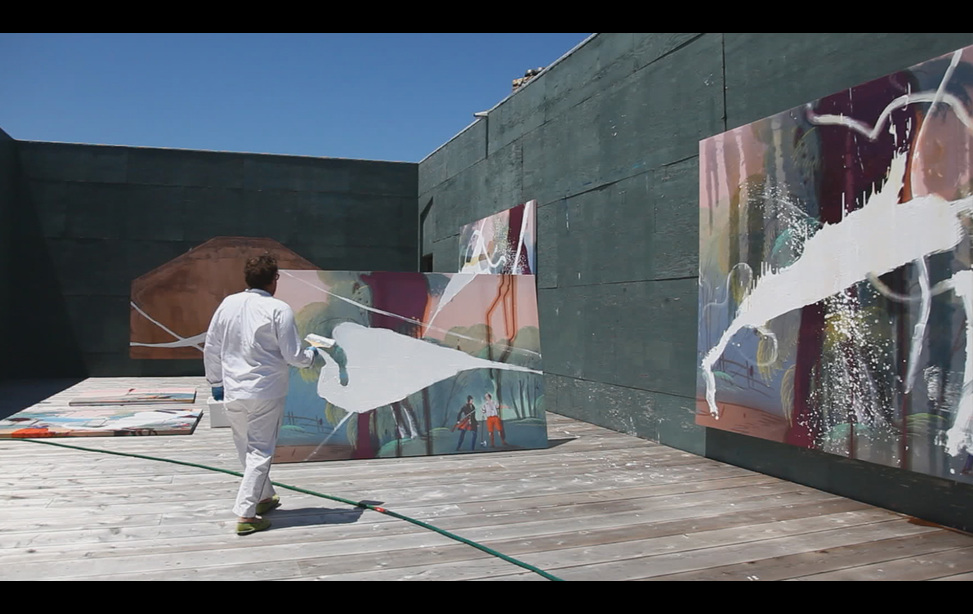 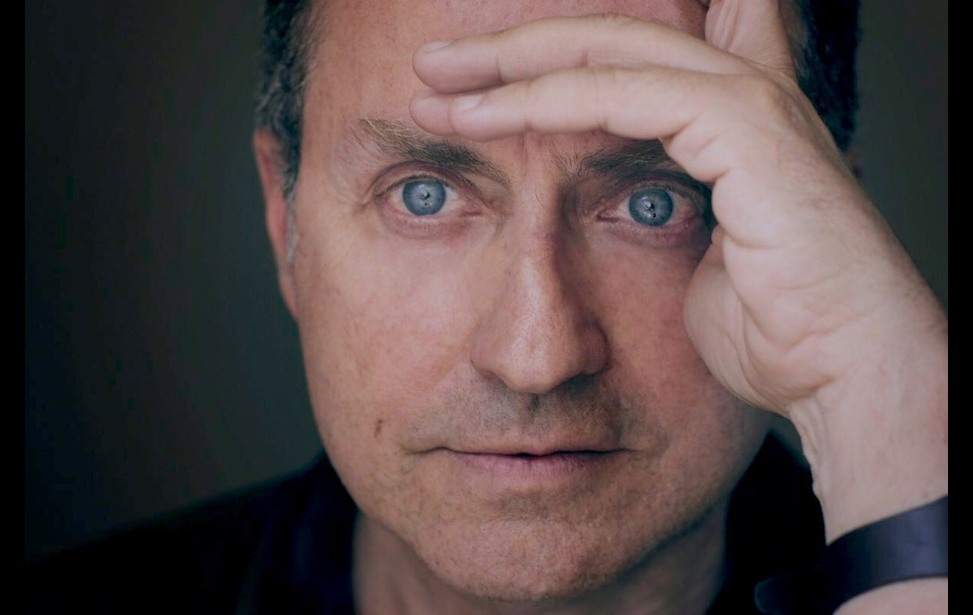 “Everyone knows about his pajamas, his lifestyle, his art, his movies, but not many people know about his sensitivity and vulnerability,” Italian director Pappi Corsicato recently told thalo.com. As you may have guessed, unless you’ve missed four decades of art world chatter, the public persona he was referencing is the painter and filmmaker Julian Schnabel. Corsicato’s aperçu followed our query about the title of his new documentary, “Julian Schnabel: A Private Portrait”: How has the public view of the celebrity artist been off? What would a more intimate consideration reveal, and why was Corsicato moved to take on this project?

“Julian is someone who has led an emblematic life,” he offered in accented, if fluent English. “Here’s a kid from a humble family who wanted to be an artist and he succeeded. He did something that was important for American culture, for the international movie scene. My idea was to make a movie from my point of view, not a biography told in a technical, didactic way.”

The Naples-born filmmaker is best known for his campy romps Libera, The Seed of Discord and noir satire Another Woman's Face – showing his roots as Pedro Almodóvar’s assistant – and for his stage operas Carmen and The Human Voice. No such stylization pops up in Julian Schnabel, though the subject’s attraction to color, knack for eccentricity and sheer physicality jibe with the flamboyant sensibility of Corsicato’s fiction films.

The doc, which screened at the Tribeca Film Festival, combines newly shot verité footage with Schnabel’s personal trove of home movies and stills. Early on we see the artist slogging a vast expanse with a paint-soaked rag, his whole hulking body choreographing the gesture. The same muscularity powers his brushed works and assembled plate paintings.

Interwoven with such takes are interviews with friends, colleagues and family members who help trace Schnabel’s personal life and career. Al Pacino recalls him reciting lines from The Godfather; collector Peter Brant notes that his paintings “are records on canvas of his visual life experience”; and gallerist Mary Boone credits him with changing “the climate, the acceptability of painting” after the conceptual art-inclined 70s. Other commentators include Jeff Koons, Laurie Anderson, Willem Dafoe, Emmanuelle Seigner, former spouses Jacqueline and Olatz and children Lola, Stella, Vito, Cy and Olmo.

How does one film glimpse Schnabel’s outsized passions and exertions up close? That’s Corsicato’s challenge, and it makes for lively viewing -- and discussing -- even if it can’t be resolved.

thalo.com: You’ve made 30 art documentaries, including about Robert Rauschenberg, Richard Serra and Sol Lewitt. What brought you to your current subject?

PC: When I was 20, I came to New York to study dance at Alvin Ailey. It was the 80s, a great moment in the art world. I thought all that vitality was a standard for the City. Later on I found out it was an especially creative time. I went back to Italy in 1989 and began making movies. In 2002 the artist Francesco Clemente came to Naples for a huge show. Among the many friends who came to celebrate in his home town was Julian. I had known about him before, but now I got to really meet him. We bonded right away and became friends. He had already had made Basquiat (about fellow artist Jean-Michel Basquiat) and Before Night Falls (about gay Cuban poet Reinaldo Arenas). Since then we’ve seen each other here and in Italy and all over the place.

th: How did you get from there to making a film about him?

PC: Julian is a very cinematic personality. When I went to visit him at the Li Galli Islands, he reminded me of Charles Foster Kane in Citizen Kane -- or maybe Orson Welles. I told him, “Please let’s make a documentary about you.” Julian’s response was, “No, I don’t feel like it.” Then in September 2013 I came to New York with my assistant, a crew of just two. I said, “Let me stay with you and we’ll see what happens.”

th: What did happen?

PC: A lot was going on. Julian’s baby was born. Lou Reed (close friend and subject of Schnabel’s concert film Lou Reed Berlin) was very sick and then passed away. Julian’s father also passed away. Julian was very depressed. But we kept shooting. Around then the Coen brothers’ film Inside Llewyn Davis came out. There’s a character named after me, someone who’s struggling to do something, to make it. I felt very engaged with that character. That movie was like, bang! I was feeling hopeless at that point. I figured maybe it’s a sign that I should go back to Italy and forget about the movie. That was around Christmas. But six months later I met Julian at his big show in Sao Paolo and he felt like doing the documentary. From that moment on I interviewed his friends, family, everybody. I got 80 hours of footage. It took nine months to do the first rough cut, which was four hours long.

th: What about Schnabel’s work particularly resonated with you?

PC: The way Mathieu Amalric (playing the writer/editor Jean-Dominique Bauby in The Diving Bell and the Butterfly), touched the face of Max von Sydow (playing his father) very much touched me. Just as Julian was saying something about himself in that movie, I’m saying something about myself in this movie using Julian’s life. I relate to something about Julian in his relationship with his father and mother. I feel connected to him. That’s why I say it’s my movie on him and not an objective biography. I think you only begin to understand your relationship with your parents when they’re almost dying. Julian was very close to his father in the end and maybe he recovered from the sadness that he hadn’t always had a good relationship earlier.

th: The scene in your film when Julian weeps at lunch during the shoot of When Night Falls shows how deeply his father’s Holocaust experience affected him emotionally, and reared up in his work. What stood out for you about his films?

PC: I found it striking that such a masculine artist could make a film about the homosexual situation and about a handicap. Also, Julian’s films gave me another way of seeing his paintings. He grew up on the border of Mexico. His movies don’t look like they were made by an American from an American point of view. For example, Before Night Falls and The Diving Bell and the Butterfly really look like they’re from Cuba and France.

th: Screenwriter Jean-Claude Carrière says on camera that Schnabel is a “most mysterious man.” After making this film, do you agree?

PC: What Carrière may have meant is that if you meet Julian, he looks like a guy from Texas, yet he knows how to tell a story in a way that you’d never expect from him. For me what’s mysterious about Julian is his energy. He says he’s always tired. But his energy goes beyond him, the way he works all day long. We were spending all day with him as he was painting, visiting friends, meeting people. We were mashed potatoes at the end of the day. He would come out after a day’s shoot and be like, “I’m going to go paint.” Or: “I’m going to go see a movie, want to come?”

th: What was your biggest surprise?

PC: There’s something tragic about Julian. He’s so without boundaries that you might think he exposes himself very freely, and for me that makes him this tragic figure that can be wounded easily. He doesn’t protect himself. He didn’t even stop when he was criticized very harshly by the art world. I think he suffered from it, but he kept working anyway.

th: In the film gallerist Mary Boone says Schnabel is “sometimes abrasive,” and his daughter Lola recalls his imperiousness, but also his loving, creative style. What was your experience of him?

PC: He could be blunt, he could also be sweet. To be like this, are you really secure or really naive? I don’t know if it’s because he’s a courageous man or just the way his personality is, but if you know him you understand this way of being.

th: How did Schnabel’s art influence the aesthetics of your film?

PC: I like to use color and texture in my movies. That’s another connection that I have with Julian’s visual work. But in fact this movie doesn’t have my usual aesthetic. I don’t often use a hand-held camera, as was the case here.

th: Julian Schnabel: A Private Portrait opens by the Mediterranean Sea and the water theme continues with Schnabel’s beloved pastime of surfing and with him discussing the influence of water on his fluid sensibility. How did the water motif seep into your film?

PC: One of the earliest scenes shows Julian plunging into the water. It’s like he’s diving into his consciousness. Water is an element that is very prevalent in his work. There was lots of talking in this film, so we had to have the images go very fluidly and fast. The editing was made to have a rhythm, not to get stuck. And the use of hand-held camera was also to reflect the idea of water.

th: What advice do you have for a filmmaker who wants to follow an artist?

PC: Some filmmakers feel you should just describe what you see. My idea is exactly the opposite. Everything goes through me. I like to express my personal personal point of view, not just a generic one. For example, my film about Richard Serra reflects my sensitivity and creativity. I’m not just putting the camera here or there and that’s it. What’s fun for me is to be really involved in a movie or installation. It’s not fun to keep a distance. Because when you make a movie, you are always subjective, so it’s better to be subjective all the way.

Julian Schnabel: A Private Portrait opens this Friday at the Quad Cinema in New York.