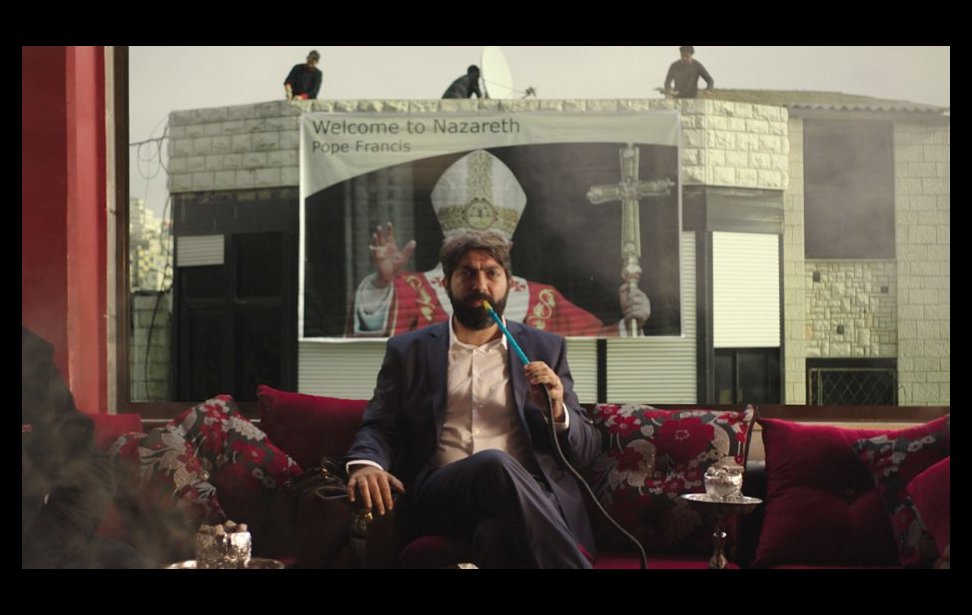 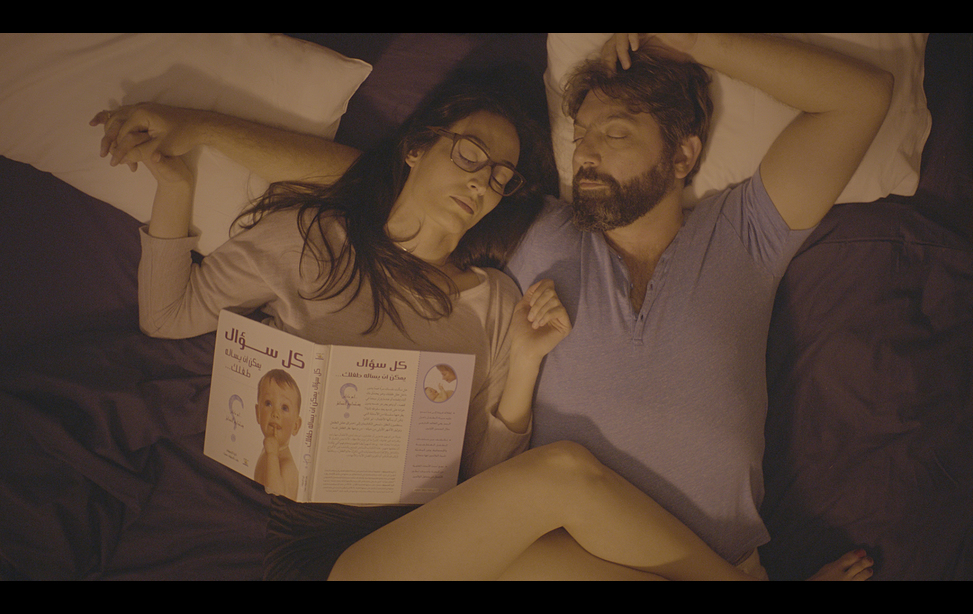 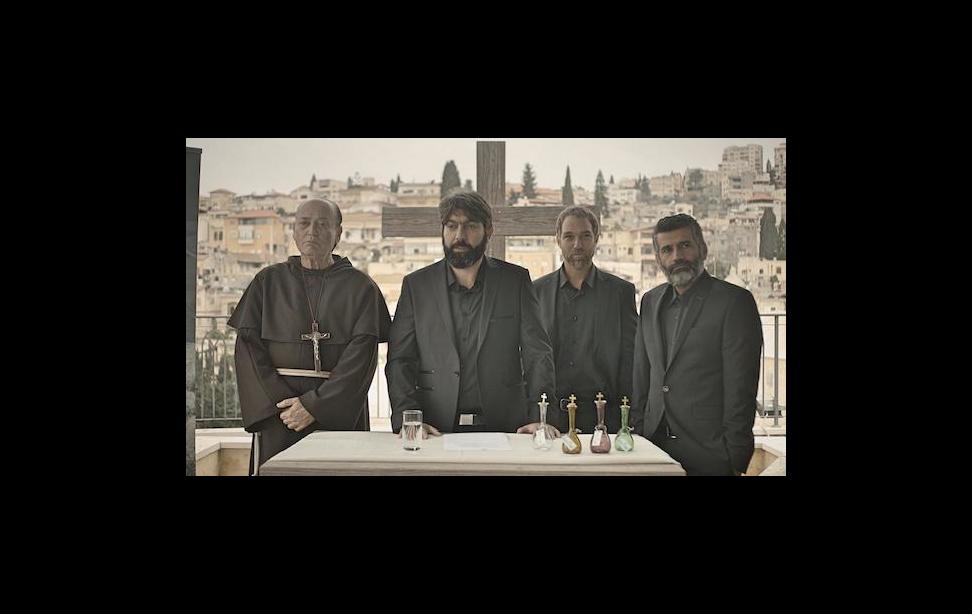 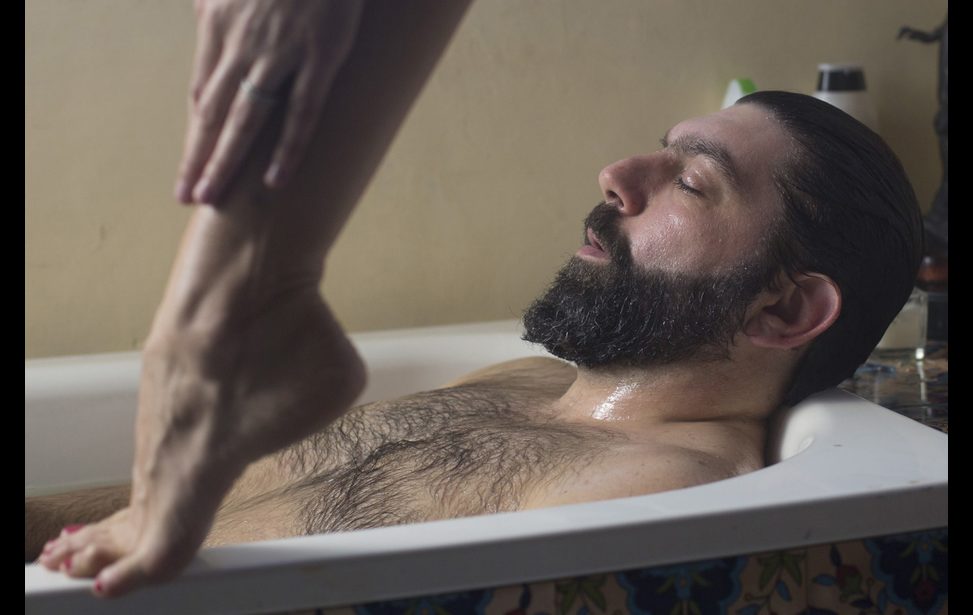 “Nazareth! Can anything good come from there?” wondered Christ disciple Nathaneal in the Gospel of John. Reframing that question in the context of present-day Israel, Nazarene writer-director-star Shady Srour has retained biblical skeptism in his debut feature Holy Air. But also wicked humor. As Philip told Nathaneal, “Come and see.”

Srour plays Adam, a world-weary accountant who lives with his wife Lamia (Laëtitia Eïdo) in Nazareth. As Christian Arabs in Israel and the Middle East, they come by their plot reversals honestly. Add to that the character shadings that make them progressive thinkers, searching souls and concerned world citizens, and their odds of encountering daunting setbacks increase exponentially. So when Lamia discovers she’s pregnant – call it Nazareth’s latest Annunciation -- the challenge is on to provide for the future life despite the omens stacked against it.

For Adam this means quitting his job at a corrupt accounting firm and launching a business. This being the Holy Land, his best bet is merchandizing religious kitsch. And air being the only commodity he can reliably procure as a minority citizen, his product is bottled “holy air.” Lucky thing the stream of foreign tourists can provide a ready market. But first, as a priest tells him during confession, Adam must rally the unholy trinity governing the Nazareth firmament: the Jewish Israeli Minster of Trade, the Muslim mafia capo and the local Vatican rep.

Is selling air just the latest of what NGO exec Lamia calls Adam’s “crazy ideas”? Certainly, nothing is guaranteed in this precarious part of the world, as the characters’ obsession with probabilities underscores. There’s a 50 percent chance Lamia’s fetus will survive, the doctor (Yussuf Abu-Warda) tells her, and the same odds of success go for the treatments Adam’s father (Tarek Copty) is receiving for cancer. Or take the figure Lamia cites for “women in Arab society who don't reach sexual climax”: a whopping 90 percent. The string of statistics, like a secular rosary, offers these moderns a sense of comfort and control. Sometimes good things just happen: Adam’s commercial prospects seem to brighten with the Pope’s upcoming visit to Israel. Too bad war breaks out to literally bring things crashing down.

Despite its light touch, Holy Air is an apocalyptic tale as Nazareth teeters on the brink of dysfunction. Adam’s fate is as doomed as his hometown. No wonder traffic jams bracket the movie. For a replay, Holy Air opens with the sound of honking against a dark screen and then gives a side shot of Adam stuck bumper to bumper. One beat later the camera takes a back seat to reveal Lamia perched next to him in the car. “I bought a testing kit,” she informs him, and with that, the tribulations begin.

“Impossible!” Adam gasps after Lamia says she has always dreamed of finding out together whether she’s going to have a baby. The word “impossible” later resurfaces with a gut-wrenching question from Adam’s ailing father: “How am I ever going to separate from you?” Yet another crisis of the imagination comes when Lamia rethinks the viability of having a child in cruel times. Dampened possibilities, whether from worldly conditions or from the human condition, abound in this poignant tragicomedy.

“It’s about living in an impossible place, but you have to keep going,” Srour told thalo.com at the Tribeca Film Festival, where the film is contending in the international narrative competition. If the image of choked roads comments on the frustrations of trying to advance amidst withering obstacles, there’s also a call to find solutions in precisely that suffocating atmosphere.

The story is so warm-blooded you may not notice that it’s a blistering critique of Israeli discrimination against Arab society and entrepreneurship. Yet Holy Air is an equal-opportunity satire, taking potshots at common hypocrises found among the three Abrahamic faiths.

With a name like Adam, the film references a certain expulsion from Eden. Come to think of it, making shekels from bottled air may not be such a stretch compared to the Good Book legend of creating the first human from mere dirt. Asked about his decision to begin his saga on a solitary note, Srour said, “I wanted to start with Adam in the frame alone because ultimately he is alone. Whatever you decide to call him – Christian, Palestinian, Israeli – he’s on his own. He’s a minority inside a minority.”

To fortify his hero, Srour drew from the classical tale of Oedipus Rex. Other inspirations, also tapping into his theater background, came from Samuel Beckett’s Waiting for Godot and Henrik Ibsen’s The Wild Duck. Adam “has characteristics more like a deity,” noted the debut feature director, adding that the character must be exceptionally powerful in order to survive. Deflations loom at every turn.

During a fruitless meeting with a former Israeli classmate, Holy Air’s leading man carries a whiff of Woody Allen. Likewise the schlocky tour guide Roberto (Shmulik Calderon), who inspires Adam’s souvenir scheme, could have been named for Roberto Benigni. There’s even something antic about the tug that develops among the local toughs – young Muslim mafiosos whose protection racket Adam must slip. Above all, it’s Srour’s knack for mixing prankishness with pathos, enchantment with despair that makes him him a talent to watch.

At first glance, the filmmaker comes off like the wryly neurotic character he plays onscreen. He sports the same beard and the same winning combo of droll humor and resigned pessimism. His intense, wide-set eyes suggest a classic Mediterranean icon you might find in a fresco.

Yet there’s a gentleness to his words, rhythmically delivered in his trademark lilt, when he decrypts the meaning of his art. They’re tinged with hope, affirmations like, “I wanted to reach the Israeli people who go beside me every day with their car, but don’t see me as a human being. I want the other to see me as not the Arab, the terrorist, or whatever they think about me, but as a person.” For the Tel Aviv University and Academy of Art University alum, “reaching the other” meant painting with a comic, humanistic brush and avoiding the sort of ripped-from-the-headlines violence that would risk “pushing away the audience.” He credits his producer Ilan Moskovitch with helping to tone down the potentially alienating jabs of the early screenplay drafts.

The finished work burrows into the psyches of the main characters, revealing their desires, anxieties and humiliations, with confessional intimacy. As befits a film set in Nazereth, Srour uses Mount Precipice as a symbol of reckoning. According to Christian tradition, that’s the cliff where an angry mob tried to end Jesus’s ministry. Here it provides a jumping off point for Adam’s identity politics. “I wanted to use this as this place where he doesn’t feel good. Even with his own people, he doesn’t feel right or connected, or that he belongs.” Prodded further, Srour allows, “It’s not about selling air -- it’s about going to his own space. I connected this with the Jesus story.”

In the same vein, were Adam’s repeated tub soakings meant as a nod to baptism? “The bathtub for me was the womb,” Srour explained, continuing, “Adam wanted to go into this safe place all the time.” Pressed further, the auteur peeled back another conceptual layer. “I don’t know whether everything in the film was real. Maybe it’s a dream, maybe it’s not. When Adam goes into the bathtub in the beginning, there’s some kind of magic realism at play. At the end (when the bathtub appears empty), maybe he’s still there,” Srour ventured. Noting the character’s pot smoking ways, he said, “Maybe it’s all in his head. Because how can you sell air? Selling air is impossible.”