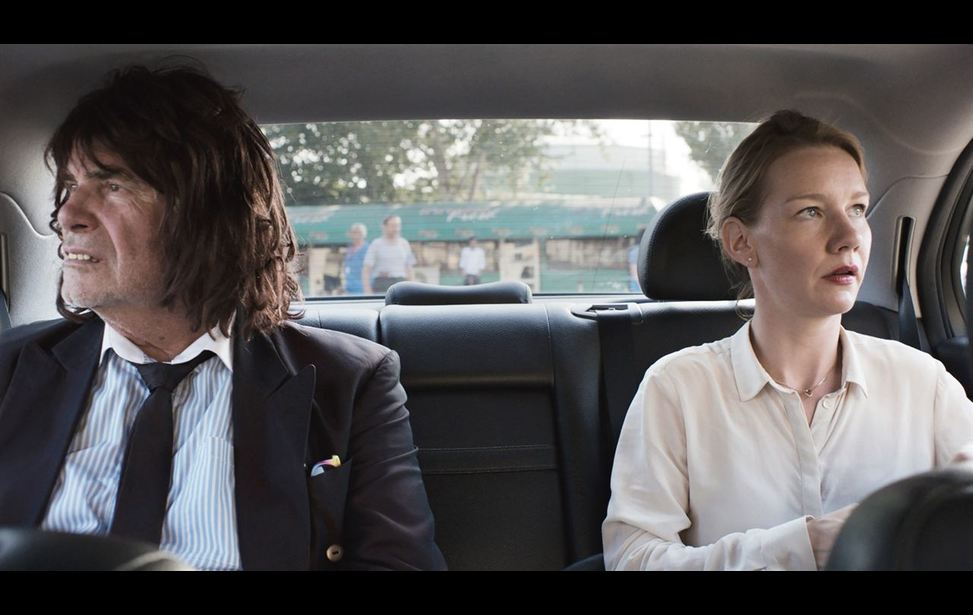 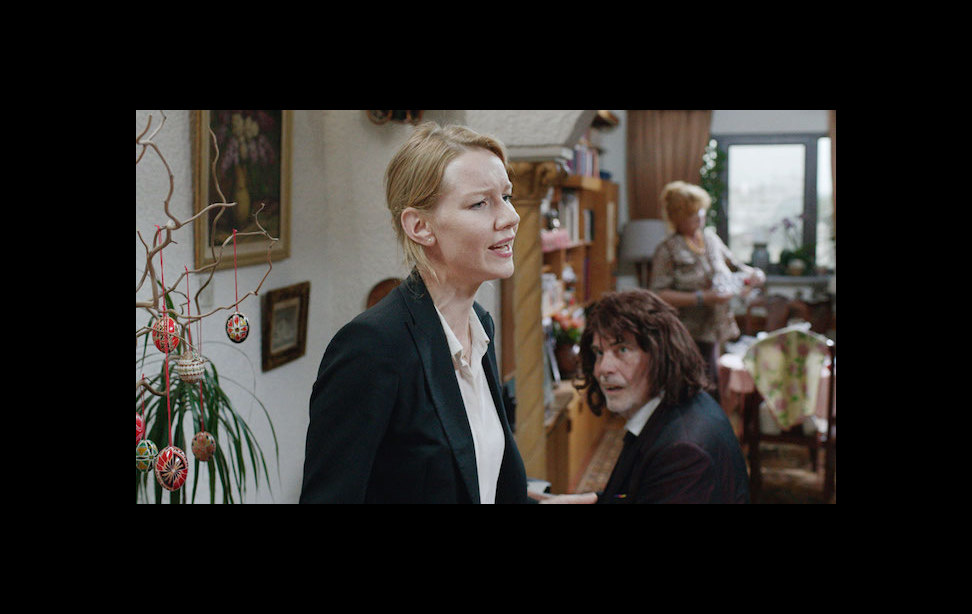 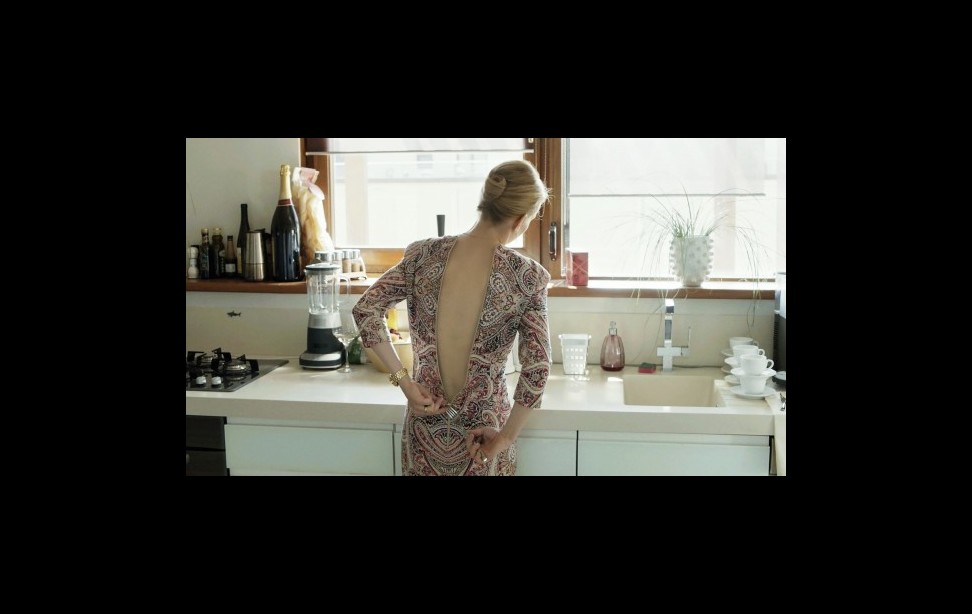 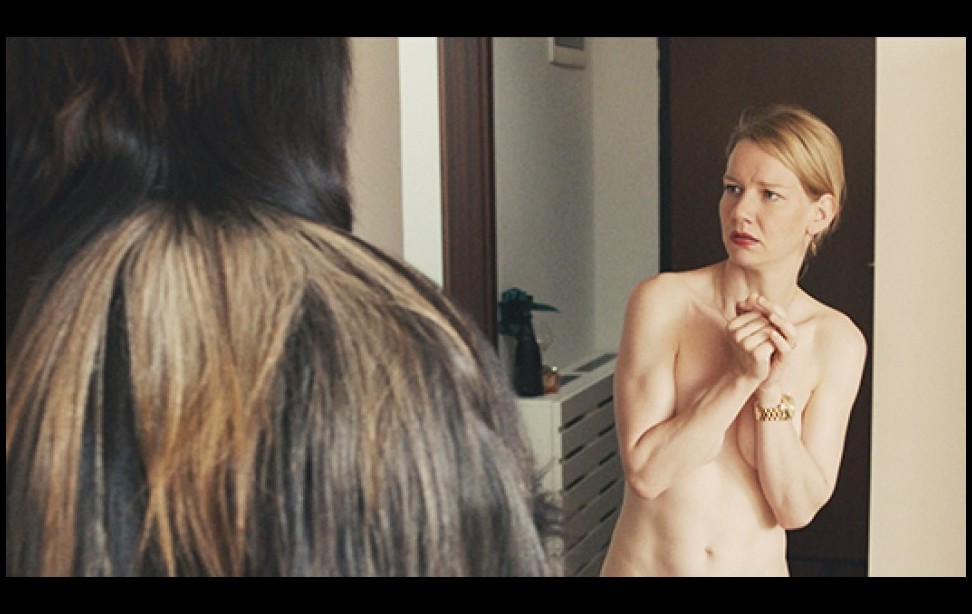 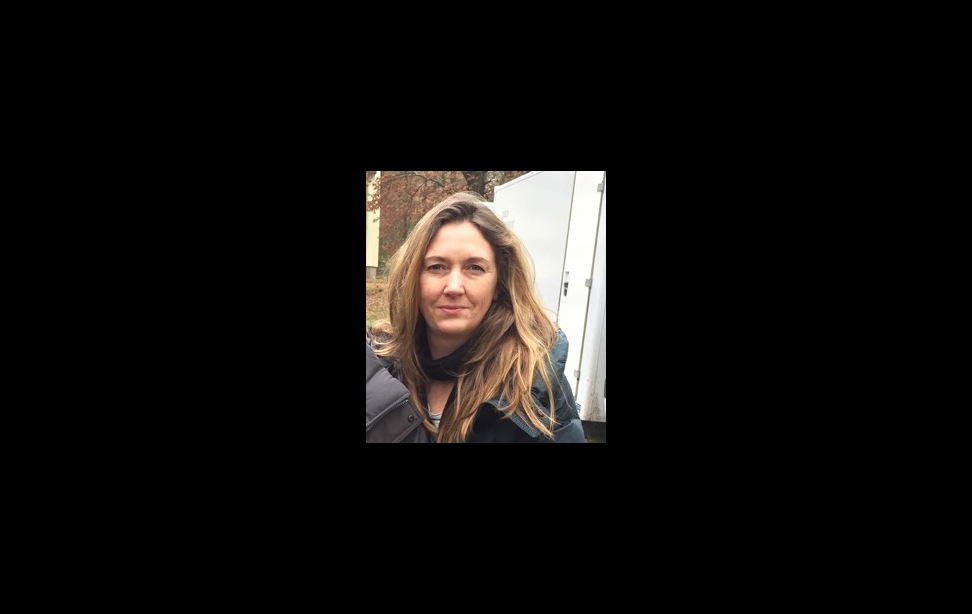 More than most films, the costumes in Toni Erdmann tell the story. Director Maren Ade’s new tragicomedy of manners makes its points as much through what its characters are and aren’t wearing as through anything they say. Set largely in Bucharest, it follows buttoned-up corporate consultant Ines Conradi (Sandra Hüller) and her prankish father Winfried (Peter Simonischek) as they struggle to reconnect as adults.

The 65-year-old widower makes an impromptu visit to the Romanian capital following the death of his dog and the winding down of his music work back in Germany. Loneliness is what propels him into his daughter’s orbit, but once there he finds a more disturbing kind of separation: the defenses Ines has constructed around her soul in support of her cut-throat, workaholic life.

Between Winfried’s humanistic, “green” values and Ines’s ambitions of modernized efficiency, there’s no bridging the psychic gap that increasingly separates them. Only in the guise of a stranger can the Boomer dad hope to get close. You could almost turn off the sound and still get the narrative, just going by the Nutty Professor dentures, shaggy wig and tacky jacket Winfried sports as life coach alter-ego “Toni Erdmann,” and going by the reticence these touch off in power-suit-armored Ines.

The telling looks were crafted by costume designer Gitti Fuchs, whose insights into the politics of clothing yielded up wearable totems that speak volumes about the emotions and hierarchies at play. thalo.com reached Fuchs in Berlin, where the Bavarian native first collaborated with Ade on her feature debut The Forest for the Trees and continued with her sophomore effort Everyone Else.

Fuchs’s work on Toni Erdmann started with a photograph that Ade supplied one year before principal photography. It featured Tony Clifton, the blustering character created by the late comedian Andy Kaufman that inspired Toni Erdmann’s eponymous trickster. “Maren needed some costumes for the casting, because the character of Toni Erdmann is so special that it was helpful for the other actors to have something to visualize,” said Fuchs. “My puzzle began,” she smiled.

“We found this jacket for theater directors, shiny and with a bit of color--a little strange, but not too strange.” I built the whole costume on this jacket.” Next came what Fuchs described as “the shirt with the stripes and wide collar,” which she figured “Winifred must have thought, This shirt smacks of the business world.” For kicks, the filmmakers dressed one of Ines’s male coworkers in a similar striped and wide-collared affair. Certainly no one else showed up in the scruffy pants or hiking shoes that were Winfried’s own. “In his heart, he’s still Winfried,” Fuchs observed. “He just took parts of a professional wardrobe to get nearer to the world of his daughter.”

Asked about Toni’s teeth, Fuchs recounted what has now entered into costume lore: this goofiest of props in Winifred’s role playing was originally given to Ade at an Austin Powers premiere when she was just starting out in the film world. The then-20 year old passed along the swag to her father, himself a practical joker who inspired some of the title character’s antics.

With Toni’s get-up created, the challenge was on to find “another puzzle piece and another” as Fuchs joined the director and her team’s research forays across Bucharest. “Normally the costume designer doesn’t go on location scouting or casting,” said Fuchs, explaining that Ade’s unconventional approach to finding actors and settings is all part of her script development process.

Fuchs went armed with a camera. At times hiding it so as not to draw attention, she photographed people out and about, parading their natural styles. Everything from shirt brands to eyeglass frames informed her growing image library and awareness as she documented the lifestyles of Bucharest’s rich and poor alike. “I work a lot with my eyes on the street,” commented Fuchs.

To supplement her direct observations, the costumer sleuthed out contemporary fashions in celebrity and business websites and on the pages of Manager magazine. Taking the cue from a German advisor to the production—who herself had worked as a corporate consultant in a milieu comparable to Ines’s—Fuchs went on shopping sprees in both Berlin and Bucharest. She turned up designer brands at a Berlin stock warehouse, in chic stores and, in the case of Ines’s donated Drykorn suits, on the racks of a sponsor. A Hermes Birken Bag here, a WANT Les Essentiels de la Vie bag there: nothing but luxury labels for the management maven and her expat consorts in globalizing Romania.

Not so for the more than 1,000 local extras, however. Depending on the scene, some of the actors’ personal apparel fit the bill. But things got tricky in dressing the local male cadres. “The men came in suits from the 90s, but we needed clothes for a contemporary picture,” said Fuchs. “A lot of the people are poor and they don’t have so much.” Fuchs’s job was complicated by the fact that “you don’t have costume stock in Romania like in Berlin.” Working with a modest budget required the designer and her team to be resourceful. A combination of Berlin stock borrowings and Romanian purchases and stitchery provided most of the fix.

How the filmmakers came up with their jewelry stash was another creative feat. “I was lucky to find a fake Cartier watch,” mused Fuchs, once again touting her Berlin stock. That’s also the source of the large silver necklace that Ines wears to a company bash. Asked about this blingy bid for dominance, Fuchs affirmed, “It’s a status symbol.” From her many talks with Ade, the costume designer recalled the director saying, “If Ines is wearing a necklace like this, she’s really wild and dangerous.”

Just how feral Ines is willing to get becomes clear at her birthday party. It all starts with a swirly dress that constricts her freedom of movement. Off it comes. The only other dress she has appeared in, paired with spiky heels, was an Alpha female number calculated to provoke as much as to intimidate. It did just that at the above-mentioned bash—and at the sex play on her terms that followed.

But dealmaking isn’t always so easy. Ines’s office attire reflects her conformity with the rulebook for climbing the company ladder. By day she mostly keeps her color palette to beige, blue and black, nothing busy, and any more vibrant fabrics come out after hours. The steely striver eschews skirts, partly because they’re her assistant’s garb of choice, and Ines prefers “to differentiate her power rung.” Perhaps more to the point, asserting her place amidst the male-dominated, impersonal flow chart means projecting a façade of strength where flounce could betoken weakness.

Which begs the question of that birthday suit. When Ines sheds her dress, pretense gets stripped in the process. Pressed about what Ines’s au naturel silhouette reveals of her character development, Fuchs replied, “She wants to start anew with everything. With her father being there, the past comes to her. She sees that she can’t escape this basic fact of where she comes from.”

“Ines was always ashamed of her father Winfried, but she could get close to Toni Erdmann,” Fuchs continued. “The audience always thinks about Toni, What’s this guy? He’s so embarrassing! But ultimately she’s not embarrassed. Getting naked is a key to a new world--to freedom from her boss and coworkers and friends. But it’s also a key to embracing her blood and flesh.”

Visual riffs abound on the theme of Ines’s rebirth. As Fuchs pointed out, her discarded dress shares the curlicues of the painted Romanian Easter eggs that figure in a scene leading up to her birthday bash. And dark-hearted Ms. Conradi’s spring awakening coincides with other spiritual traditions as well. Vulnerable as she is in her pelt, her inner animal—or long-dormant inner human—is unleashed by a paganistic presence during her birthday rites.

“The kukeri is the next key,” Fuchs said, referring to the oversized, furry regalia that Toni Erdmann rears up in at the birthday party. As his culminating disguise, this ritual creature who chases away evil spirits of winter “unlocks Ines’s inner self,” Fuchs commented. “The kukeri is the soul of Toni Erdmann, not the soul of Winfried. When he moves just a little bit, there’s so much emotion. The head shakes. It’s a little bit sad.”

A climactic scene finds Ines, swathed in a flimsy bathrobe, running in a park towards her beast-like forebear and throwing her arms around him. “The vulnerable daughter and the creature could finally come together,” said Fuchs. Would she have shown such affection had he vaguely resembled her father? Fuchs thought for a moment and said, “She couldn’t have hugged him without his fur costume.”

Toni Erdmann is Germany’s entry into the foreign language Oscar race in 2017. It was screened at the 54th New York Film Festival.

2.Peter Simonischek as Toni Erdmann and Sandra Hüller as Ines Conradi with her coworkers in “Tony Erdmann.” Photo courtesy of Sony Pictures Classics.

5. Sandra Hüller as Ines Conradi and Peter Simonischek as a “kukeri” in “Tony Erdmann.” Photo courtesy of Sony Pictures Classics.