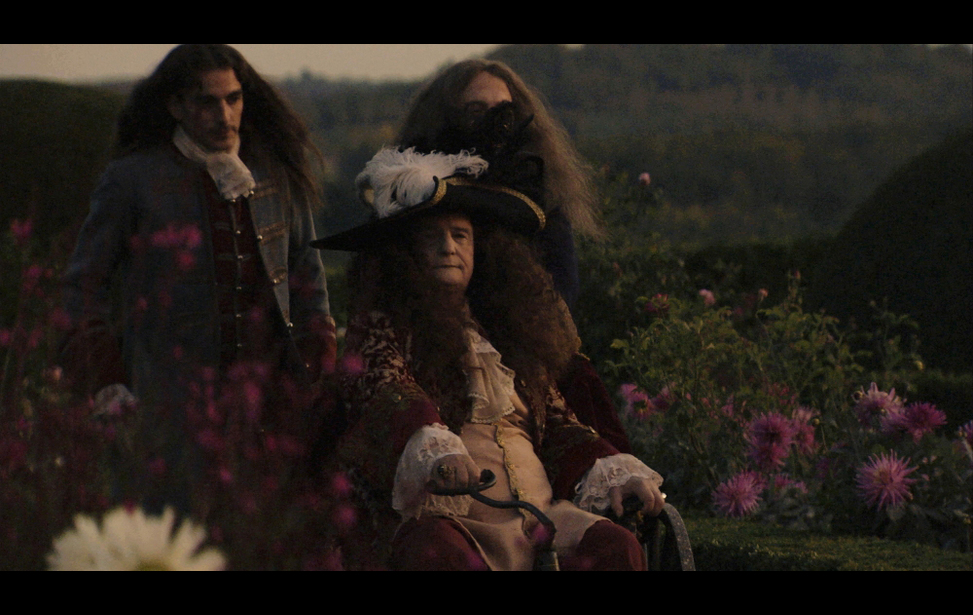 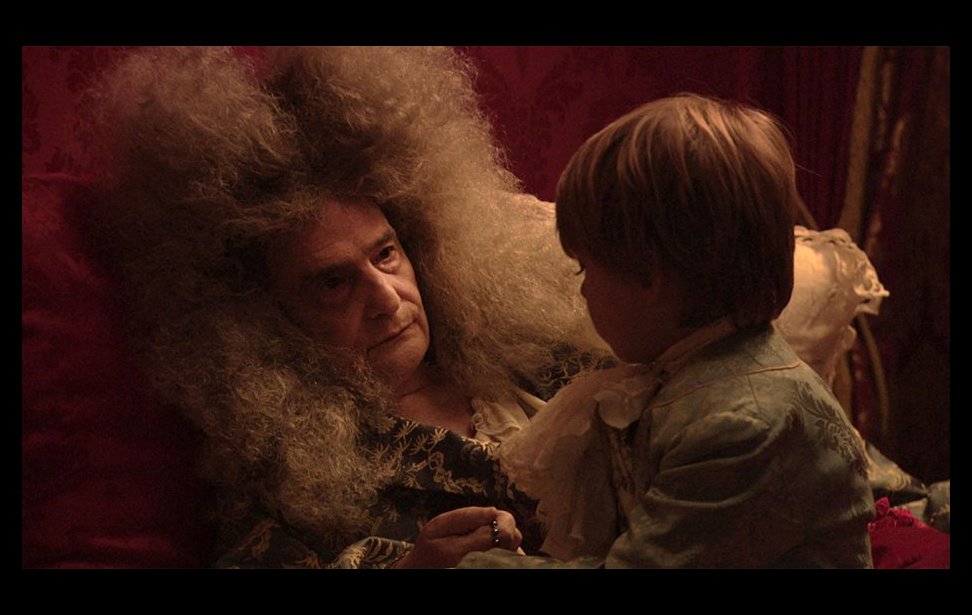 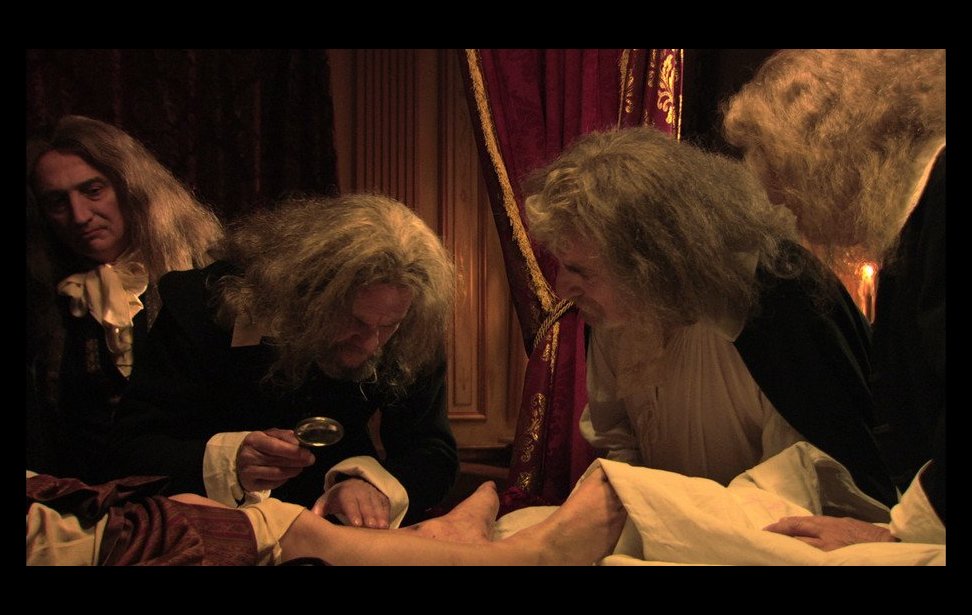 It’s August 1715, and the French monarch Louis XIV is perched upon his wheelchair, not his throne. The sun has yet to rise over the Gardens of Versailles, yet the crepuscular mood isn’t about the elements. Not even the revelries within his Château can brighten the King’s funk as black gangrenous spots start to spread across his royal flesh.

The extinguishing of the Sun King occurs almost entirely around his death chamber in Albert Serra’s new film The Death of Louis XIX. Drawn from the medical records and the memoirs of two courtiers — the Duke of Saint-Simon and the Marquis de Dangeau — the script largely follows the sequence of events as they unfold over Louis XIV’s last 15 days. By right, The Death should be deathly boring. But the you-are-there immediacy of the production makes it compulsively watchable, and the rope-a-dope between absolute power and helplessness gives it a bleakly humorous edge.

It marks Serra’s latest effort to bring literary and historical icons to relatable life. His first feature, the Don Quixote mashup Honor of the Knights, put him on the world festival map a decade ago. With Birdsong, his sophomore film, the auteur riffed on the story of the Magi as drawn from a Catalan Christmas song. Next came Serra’s conjuring of an encounter between Casanova and Dracula. Titled The Story of my Death, it took the Golden Leopard at Locarno in 2013. The Death of Louis XIV stars Jean-Pierre Léaud. Not only is the Nouvelle Vague darling the first celebrity Serra has worked with, his casting choices until now have been entirely amateur players from his native Catalan village.

The Death of Louis XIV began as a performance piece for the Centre Pompidou in Paris. It ran aground of budgetary woes, but was later revived as a film. Inspired by the project’s stage roots, Serra designed the filmed production as a “total continuity, as if it were a performance.” The Death of Louis XIV recently screened at the New York Film Festival, where Serra addressed the press.

“Often we have too much respect for past, so it lacks lively feeling,” he began speaking in syncopated pops. The Death of Louis XIV brings forward what the director heralded as “a unity of time, space and action,” allowing viewers to “live the present through the past.” For this Serra partly credits his ongoing three-camera shoot. That process hinged on keeping the cameras rolling, stopping only when necessary for lighting and costume changes. The idea was “to really live this death, this agony the way it happened in the past,” he explained.

Despite the film’s lulling longeurs, time is of essence. In what sometimes feel like closed loops, we witness the patient sipping water, refusing food, groaning in pain — and virtually hitting rewind. The use of repetition has a mesmerizing effect as seemingly endless ministrations mark the rhythms of life and death.

The director’s idiosyncratic approach carried over to his near non-intervention with the cast and crew during principle photography. He described giving “directions to the cameramen in a very fast way” to find compelling angles in the moment. Beyond that it was about delegating and stepping back. The laissez-faire policy extended less to his work with Léaud, with whom he met four or five times prior to the shoot to encourage a sense of “density,” and stuck around during his performance. For other cast members he was more strictly hands off. “My methodology was based on non-communication with actors, non-communication with technicians,” said Serra. “So I am a little bit of a spectator during the shooting. It’s like magma. It’s so big at the end, you have to be critically minded in the edit.”

The former student of philosophy and literature, who has also written plays and produced video pieces, brings a wealth of disciplines to filmmaking that makes it distinctive both in process and result. Serra expressly set out “not just to make a cliché about a political subject” or to get bogged down in the typical power struggles of the court.

Not that the King’s retinue holds back from one-upmanship as they cluster around his bed. His doctor Fagon (Patrick D’Assumçao) would seem to hold sway, though neither he nor the Sorbonne experts who weigh in can agree on the cause of the malady or its cure. Nor indeed can the charlatan from Marseilles who comes bearing a magic elixir. The privileged few admitted into the sickroom also include Louis’ wife Marquise de Maintenon Irène Silvagni), his 5-year-old great-grandson Louis XV and clergyman Le Tellier (Jacques Henric).

Despite the stirrings of King Louis’ colleagues and kin, The Death of Louis XIV foregrounds his human ordeal. “How do you deal with death and real intimacy?” Serra summed up the film’s central concern. As if to offer an answer, he praised Léaud’s guileless surrender as the iconic actor naturally imagined his own slow slide into death. “The way Jean-Pierre worked in that moment, trying to live that thing in the present is because of his innocence,” Serra noted. “That makes this not a representation.”

Towards the end of the film, Léaud’s Louis suddenly breaks the fourth wall. The effect is oddly enthralling, as if he’s beseeching us to sign off on his life. Or is he waiting for his Grim Reaper, and thinks we are it? Either way, the moment is just haunting enough not to cause the usual distancing associated with an actor staring into the camera. “You know that you are facing death. You don’t know if it’s your death or the death of the King. It’s like a dialogue,” Serra reflected.

The setting itself speaks volumes. Lit by candlelight, the chiaroscuro chamber conveys an otherworldly mystique. There’s something painterly about its meticulously observed ornaments and textures, as if lifted from genre and religious scenes by European masters. Serra’s long fling with art history acquainted him with the work of the 17th-century French Baroque painter Georges de La Tour, whose Caravaggisti flourishes show up in his — and the film’s — nocturnal light effects. It’s easy to see how de La Tour’s paintings may have inspired not only the compositions but the visual commentary of some of the types who gather around the King’s bed. From beggars to saints, the subjects of Le peintre du roi (Painter to the King), as de La Tour was known, may as well be studies for Serra’s onscreen characters. A de La Tour classic such as “The Fortune Teller” practically works as a storyboard.

But perhaps no image sets the scene like the King’s wig. Designed to assert dominance, it resembles a leonine mane, if a lion mated with a lichen. The gasp-worthy hairpiece reminds us that styles come and go, and so do kings.

1) Jean-Pierre Léaud in “The Death of Louis XIV.” Photo courtesy of Cinema Guild.

2) Jean-Pierre Léaud in “The Death of Louis XIV.” Photo courtesy of Cinema Guild.

3)  Photo from “The Death of Louis XIV,” courtesy of Cinema Guild.