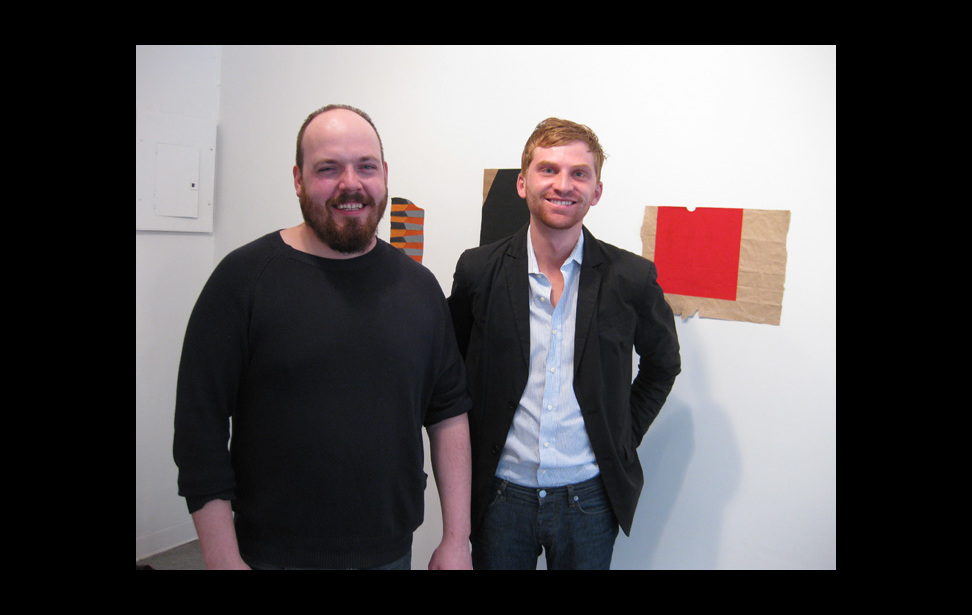 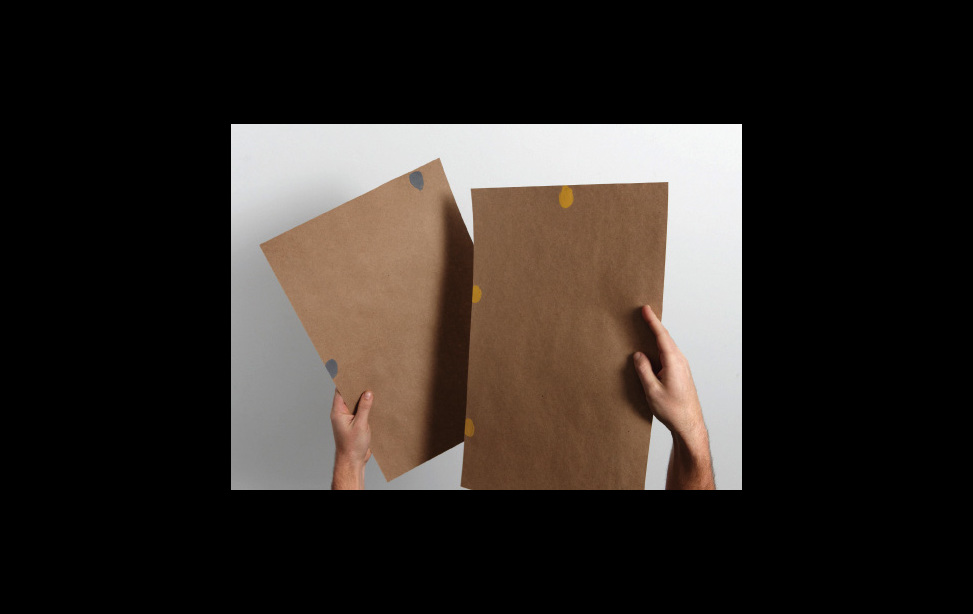 BROOKLYN, NY -- In early February, I checked out the second exhibition at Rawson Projects titled “Posters and Related Works.” The show features nine small-scale abstract works on paper by Brooklyn-based artist Ben Berlow, along with a large grid of posters that the gallery commissioned him to make.

Disassembled paper bags and envelopes serve as clever surfaces for geometric shapes of paint. Attached straight to the wall, without frames or clips, the pieces appear to be an impromptu hieroglyphics, the beginnings of a new visual grammar. They are deceptive. The artist flirts with insignificance by being so unassuming in his simple forms and humble materials. Yet, the work is persistent in asserting its fundamental uniqueness, which makes the experience rewarding.

Rawson Projects opened in November, 2010, in a small storefront on Bedford Avenue in Williamsburg, Brooklyn. The space is perfect for an intimate engagement with art. The gallery is run by Chris Rawson and James Morrill (as seen in Photo 1), who have both worked in notable Chelsea galleries and run their own curatorial projects in Brooklyn. When I visited the gallery on a Sunday afternoon, they were kind enough to answer a few questions I had about their interests and vision.

thalo: How did Rawson Projects come about?
Chris Rawson: We have been friends for a few years. The idea to open a gallery came about last year [2010] either in late spring or early summer. I had been working on some exhibitions in various spaces around Williamsburg, and knew that James [Morrill] was interested in starting a space, as well. We felt like the timing was right and found a space that worked for the scope of exhibitions we wanted to mount.

th: Your gallery is in Williamsburg and your first two shows both featured local artists. Is this incidental, or does location and community play a part in your vision?
CR: We both live in Williamsburg, so the idea of opening and operating a gallery in the neighborhood was, at first, a logistical decision—especially given that we are only on open on the weekends right now. The artists that we have shown so far have lived in Brooklyn, but that reflects proximity more than an overt desire to foster Brooklyn artists. We are always looking for new artists and new work. I think, as the program grows, we will be able to draw from a number of different sources.

th: The current exhibition features posters that you commissioned Ben Berlow to make (as seen in Photo 2). He reinterprets what constitutes a poster by having the manufactured “print” be his own thumbprint. What has the viewer response been?
CR: Like with any exhibition, the viewer response varies. We have had a lot of positive feedback, though, and feel like the poster project has been a success overall. I think a lot of people love the idea of going to a gallery and being able to buy a work of art for $25. Interestingly enough, most people appreciate them in groupings [as they are installed], instead of individually. The vast majority have been sold in groups of ten or more.

th: Regardless of medium, what kinds of things do you like to see in art? What gets you excited?
CR: Seeing art in person excites us. The best moments are when you go to someone’s studio, who has perhaps not been shown very much or given much attention, and see that their practice has grown into something really interesting. For us, since we are not very well-known either, this is a really wonderful moment, where we feel like we can really collaborate with an artist without any baggage from the “established” art world.

th: There is definite creative and financial risk involved in what you're doing. What gave you the confidence to make this happen?
CR: We have wanted to do shows with these artists for a while. We believe in what they are doing and think that it is important that others see their work too. The key is to have confidence in the artists and, subsequently, your own taste. If you believe in what you are showing, it’s far easier to make others believe in it as well.

th: What do up-and-coming artists have to do to make things start to happen for themselves?
CR: [It] seems that the successful artists are the ones that devote a lot of time to seeing other work and thinking about where their work fits within that community. They also have to work hard in the studio. People who constantly push themselves beyond their comfort zone (no matter in what walk of life) tend to be the ones who stumble on to new ideas.