Tribeca Spotlight: Film Editor Alexander Berner Puts Together “A Hologram for the King” 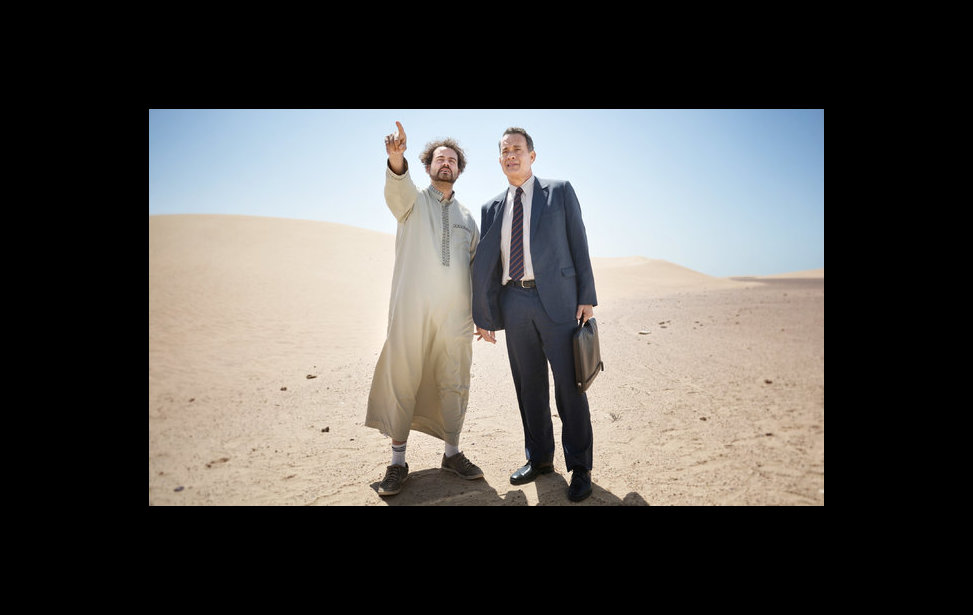 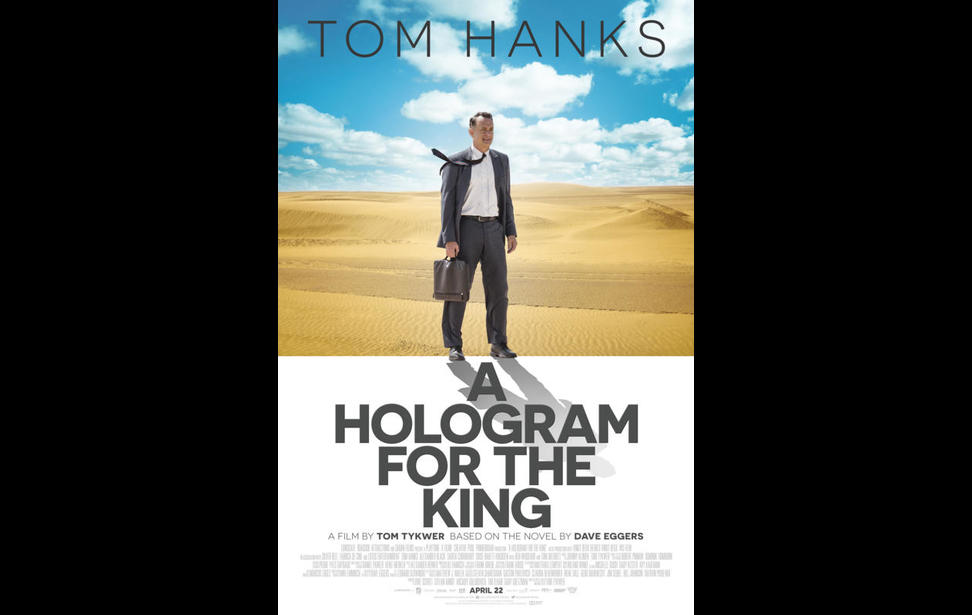 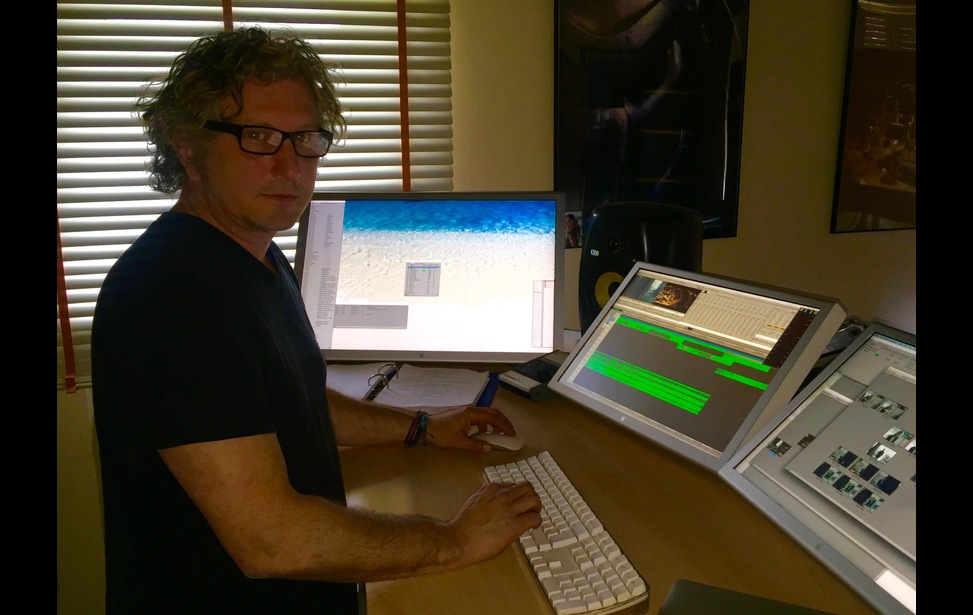 The king in A Hologram for the King is Saudi Arabia’s, and the hologram involves the Boston sales exec who pitches it to his royal highness. Alan Clay’s the name. Every bit the emotional golem that would suggest, he is America itself, a creature of the corporate mud.

Will our has-been marketer win the bid to supply telecommunications to the King’s Metropolis of Economy and Trade megaproject? It doesn’t much matter, because in this film by Tom Tykwer, he’s played by Tom Hanks — and because his real task is to reconnect with his mojo and his heart.

The American Dream Clay has been living is not terribly dreamy. With the United States economy in shambles, his best hope lies overseas. That hope comes down to a royal nephew he once met who can offer entree in landing the big contract. Insha’Allah.

Day after useless day, Clay and his team are kept waiting by the desert’s kingmakers including the King. It’s during that dry stretch that Clay takes to drinking moonshine, oversleeping and hiring a cab to the future city, an hour’s drive from his Jeddah hotel. The cabbie (Alexander Black) will also take him along a rocky path to friendship.

However cloddish Clay’s cross-cultural communications skills, his interactions back home are no smoother. There’s the matter of his daughter’s college tuition, which he can’t afford to pay, and of the bad blood with his ex-wife, who says he lacks ambition. “My penance for blowing it is being here,” Hanks’ desert castaway imagines telling his daughter.

When an attractive expat (Sidse Babett Knudsen) comes on to him at a company party, he’s hard-pressed to respond. The only skin Clay is touching is his own, as when he lances a lump on his back that he blames for his doldrums. “Are you on…Prozac?” asks the female surgeon who treats him and with whom he quickly connects.

It’s enjoyable to watch Tom Hanks grappling with the Middle East and still more so when its agent is Sarita Choudhury’s good doctor. Shifting from the arid desert sands to the vibrant Red Sea, the film makes a fitting platform for the launching of Clay’s romance. Yet, like the Dave Eggers book it’s based on, the screen version blows hot and cold, wistful and funny, alienated and romantic.

Reconciling these varied tonalities is one of the challenges that award-winning film editor Alexander Berner took on for his fourth collaboration with Tykwer. Berner, who recently became head of the German film editors guild, had previously cut the director’s Jupiter Ascending, Cloud Atlas and Perfume: The Story of a Murderer. To learn more about Berner’s process, thalo.com reached him by Skype at his Digital Editors office in Munich.

Berner quickly explained that reconciling the 93-minute film’s different moods was especially tricky because cinematographer Frank Griebe, working off a 153-page raw script, had shot nearly a million feet of 35mm footage. “We had to get it into a tempo that felt like one movie even though it was shot quite apart,” said the veteran editor.

Add to that the many options he had to chose from. “Tom Hanks does six different takes in six different moods and every single one of them is spot on. There is always the choice of when to change the tonality, and yet to try and maintain a continuous flow,” said Berner. Asked to give an example, the editor homed in on Clay’s ongoing attempts to get past the company receptionist and meet with an elusive manager. “There were three stages we had to represent, which was at the beginning to be very polite and then trying to be slightly more demanding and finally almost being angry about this guy never being around whom he wants to meet. But how angry? How humorous? How charming to try to get secrets out of her? It’s never just a pure anger scene. There’s always a blink of the eye where you think, Yeah, he’s angry but he’s still trying to keep himself together.”

For Berner, finding the right rhythms meant navigating the shaky terrain of Hanks’ character. “Alan Clay is such a fragile character. He’s sometimes insecure but at the same time, he has to pretend to be that secure executive. So you need variety. I’ve had a lot of times where I’ve had to create options during the editing, but not here.”

Yet for all the talk of changing it up, much of Hologram comes down to the runaround of Eggers’ inspiration, Waiting for Godot. Berner sought to advance the tempo and to frame Clay in the landscape “so the picture doesn’t feel slow, but it tells you the moments of slowness.” He recounted his initial instinct to “extend shots and have Clay wait and think and sit on the beach for hours.” Yet Berner quickly realized that it was more dramatic “to show him in a great big long shot walking, tiny like an ant, so you understand the distance, the effort involved.”

Offscreen the veteran editor also went with novel strategies. Unlike many of his peers, he no longer uses music to guide his rhythm — until the whole picture is cut and only then “more as icing on a cake.” These days Berner finds that he is “more honest with the material” by only cutting to sound effects and the original recorded sound. “If you use music too early during the cutting, a lot of times it smooths out little irregularities, he said, adding, “emotional developments are suddenly overexposed because of music.”

What guided Berner in editing the film’s most ambiguous moment? we wanted to know. That scene, which takes place during a nocturnal wolf hunt organized by Yousef’s family, culminates with Clay failing to shoot the predator that has ostensibly been menacing the family’s sheep. According to Berner, “This is one of the most problematic scenes of the movie, because you don’t have a voiceover to explain things. We didn’t find a way to show him shooting that’s understandable for an international audience.” Berner recounted that European focus groups raised little objection to Clay pulling the trigger, as opposed to in America, where “they had a huge problem” with it. “In the end we just had to say, Are we destroying our character or are we coddling him by not having him shoot?”

In Eggers’ novel Clay fires his rifle, but in the darkness he mistakes a little boy for the wolf. “It doesn’t hurt him, but the fact that Clay pulls the trigger not exactly knowing what he’s shooting can be very destructive,” said Berner. “We decided against putting our character in an awkward situation, especially because it’s in the last third of the movie, which means you’re not going to get him back on track before the ending. The issue is quite tough these days: the Muslim world; Americans being inside that world; Muslims with guns — all these things that the movie deals with.” Berner noted that in the two or three years since development began on the film, “developments in our planet have been quite dramatic,” and they permeated the production.

Another example of zeitgeisty elements involves a moment of truth when Yousef asks Clay whether he’d come to his support in an Arab Spring-styled revolution. Per Berner, the question is less a political conversation than a sussing up between East and West. “How much are we willing and able to be friends? Can I trust you? Is this real friendship that we have here, or are you an American looking at me like I were some funny animal? The theme is in the air in Arabia, so this is the theme they take to check if they’re friends and how reliable that friendship is.”

Issues of basic trust permeate a climactic scene where Alan Clay tells Zahra, the comely doctor, about his boyhood camping trip with his father. For the filmmakers, the featured exchange mirrored their personal experiences and relationships. “That scene leaves a lot of room for interpretation because Tom (Tykwer) and I have a different relationship to our respective fathers. And if you ask three people you’ll get three different takes on what this scene means — as extreme as: They don’t have a relationship as father and son, up to the point of: Wow, they have the most amazing relationship! Or, Was the father too demanding? Was it a good experience or was it a bad experience? Quite a few people think, Oh this was a bad experience, because Alan Clay never tells us the end of the story, the resolution to the scene. He leaves it open and so do we as filmmakers. But it’s definitely a moment in the film, the first moment, when Alan Clay shows us his inner emotional life.”

This thorny scene is a rare example of when “you have to trust more your personal feelings than the logical or rhythmical parts of editing,” Berner mused. What other advice does have for aspiring — or established — editors?

“Keep being curious and investigate your own feelings and emotions,” he said. “An editor has to understand every single character they’re cutting on screen. That’s why I try never to meet an actor in person, so I don’t associate the character with the person. Okay, I meet them, but then it’s quickly, Let’s get out of here! It happens very fast if you meet an actor and you start to develop a personal relationship with them. Suddenly that relationship destroys the work that you’re doing here. Keep the character on one side and the actor on the other and focus on the character that the actor is actually giving you.”

1) (R - L) Tom Hanks as Alan Clay and Alexander Black as Yousef in Tom Tykwer’s “A Hologram for the King.” Photo courtesy of Roadside Attractions.

2) Tom Hanks in the official poster for Tom Tykwer’s “A Hologram for the King,” courtesy of Alexander Berner.

3) Photo of “A Hologram for the King” editor Alexander Berner courtesy of Digital Editors Postproduktions in Munich.