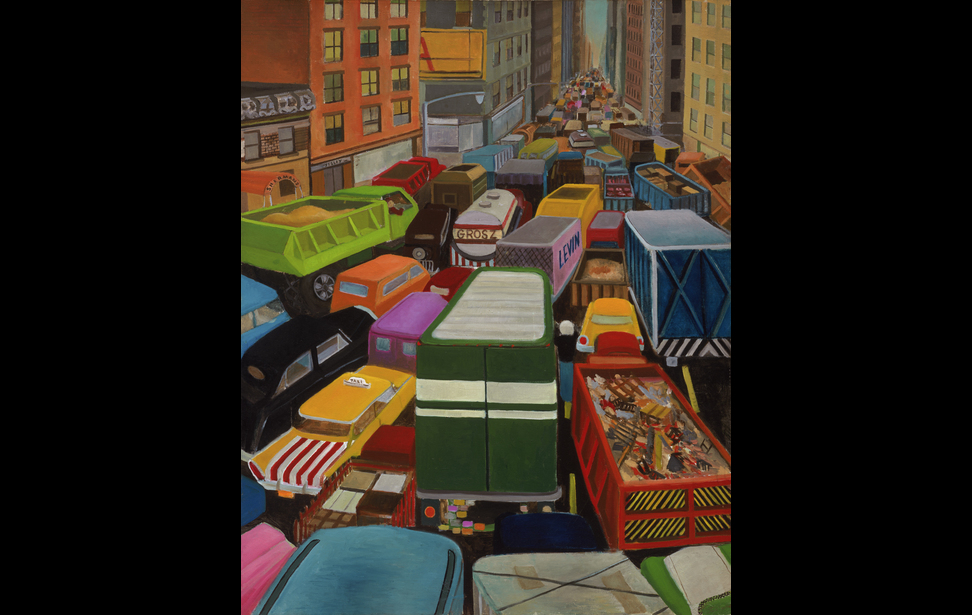 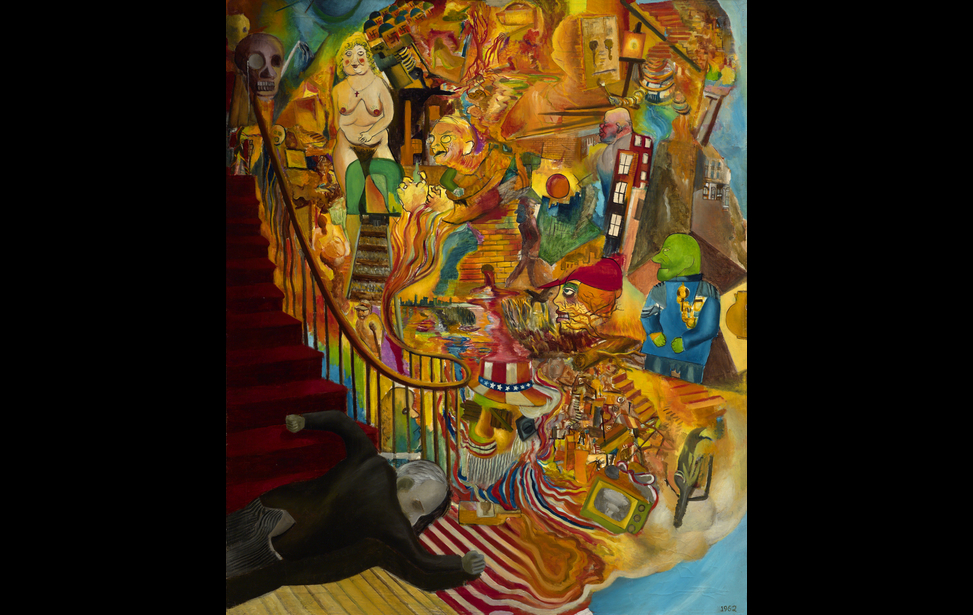 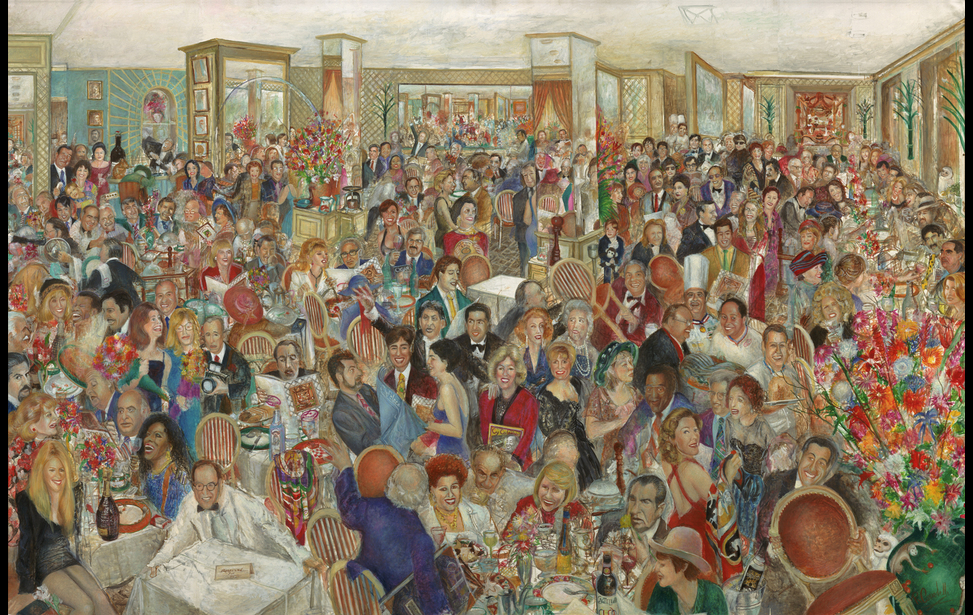 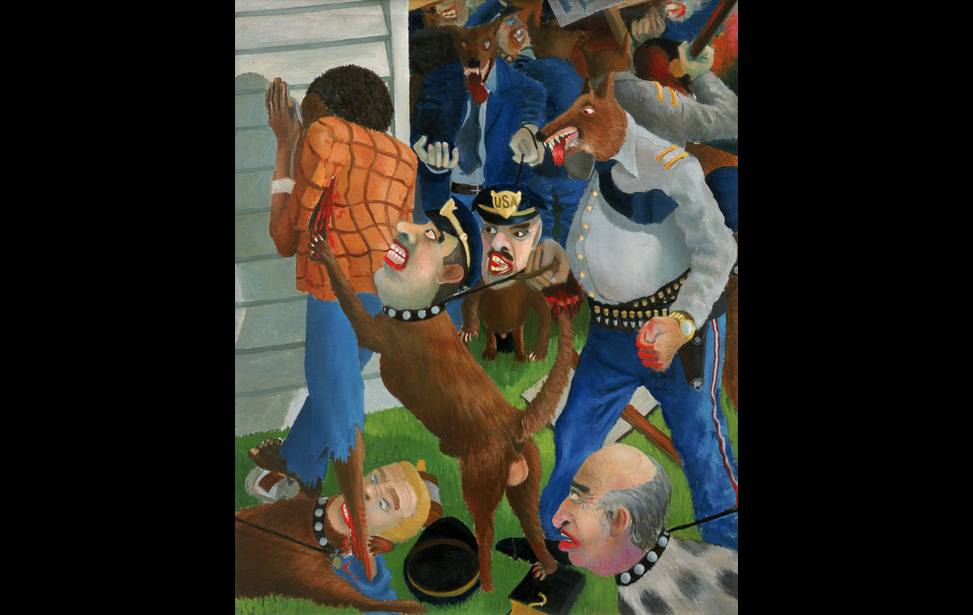 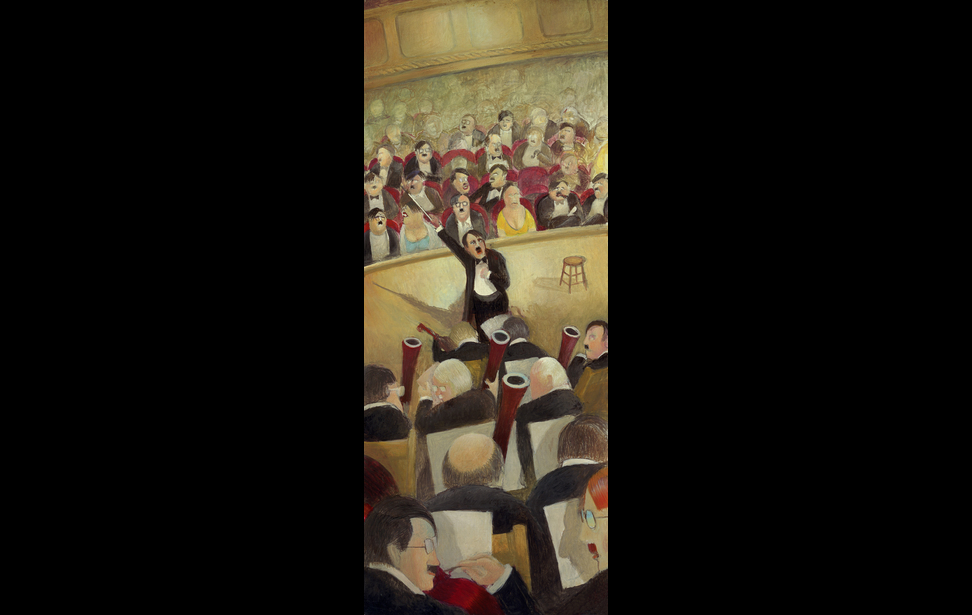 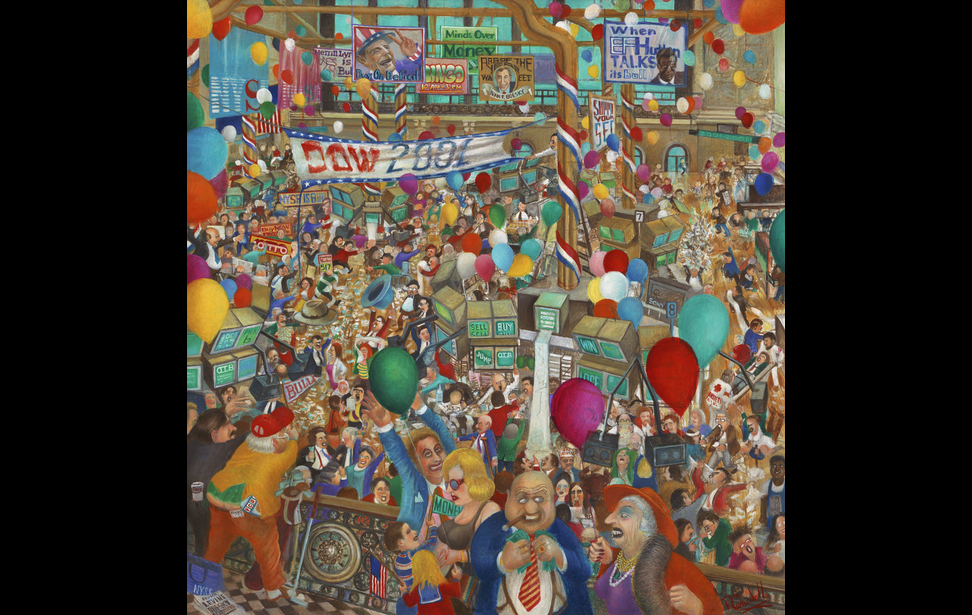 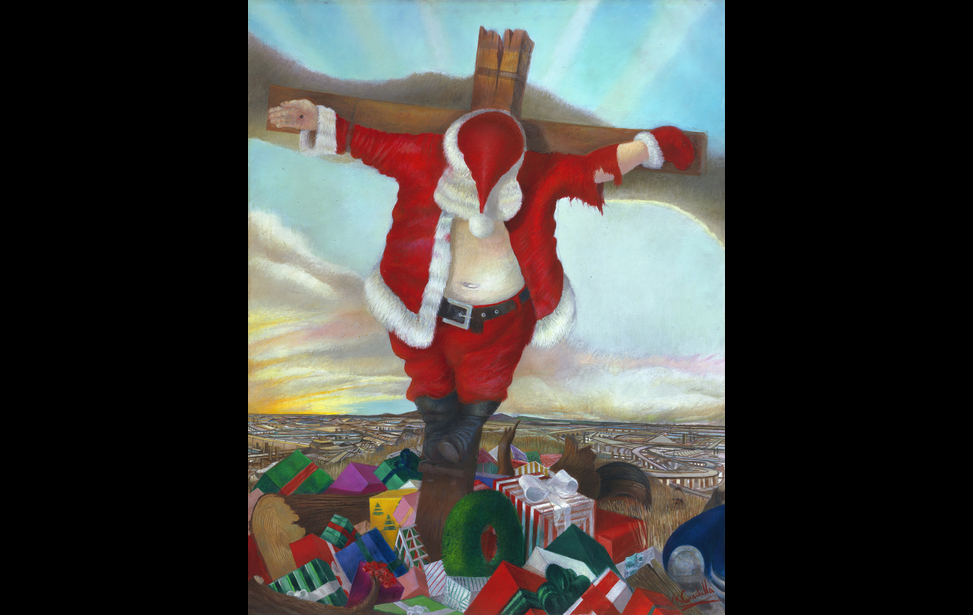 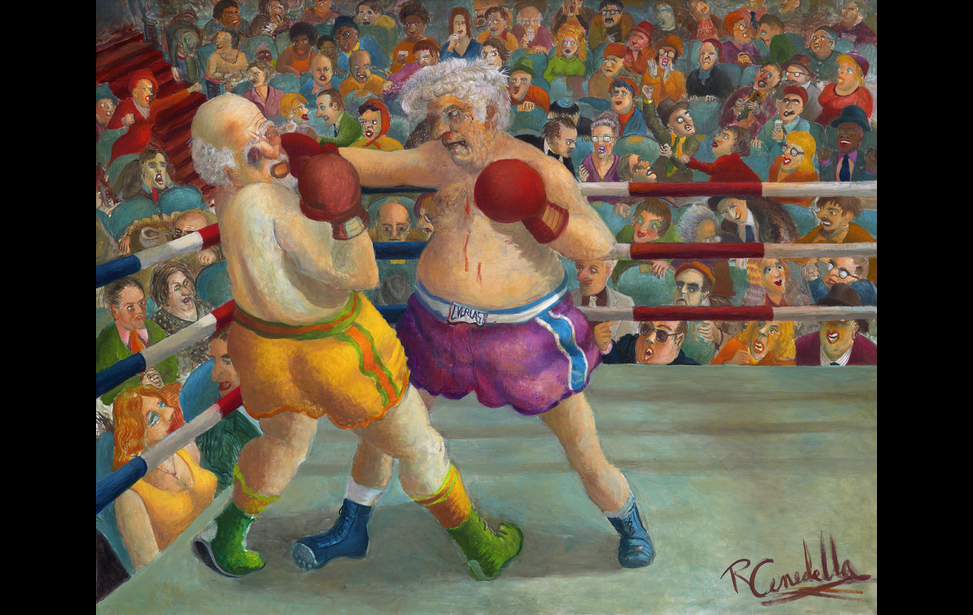 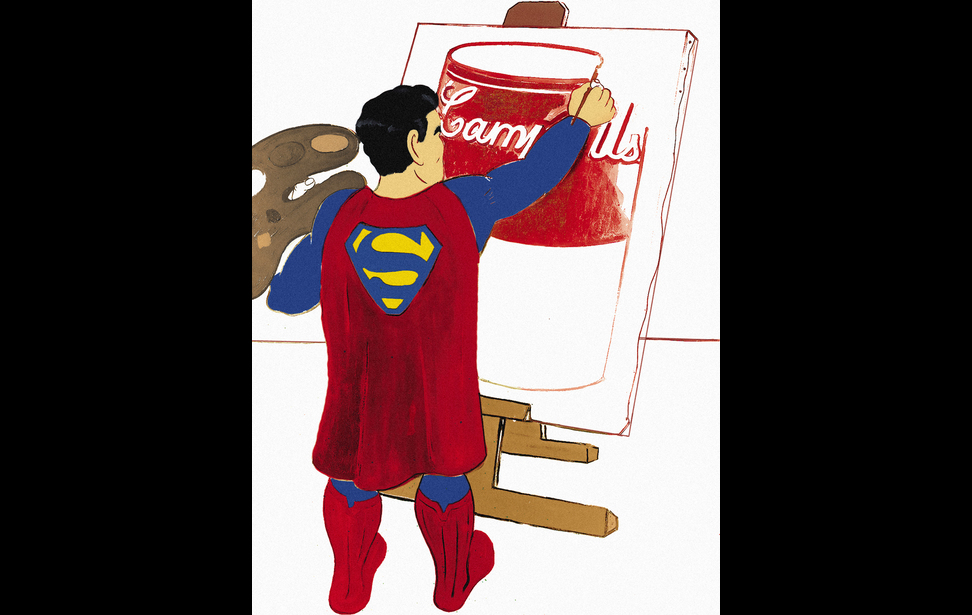 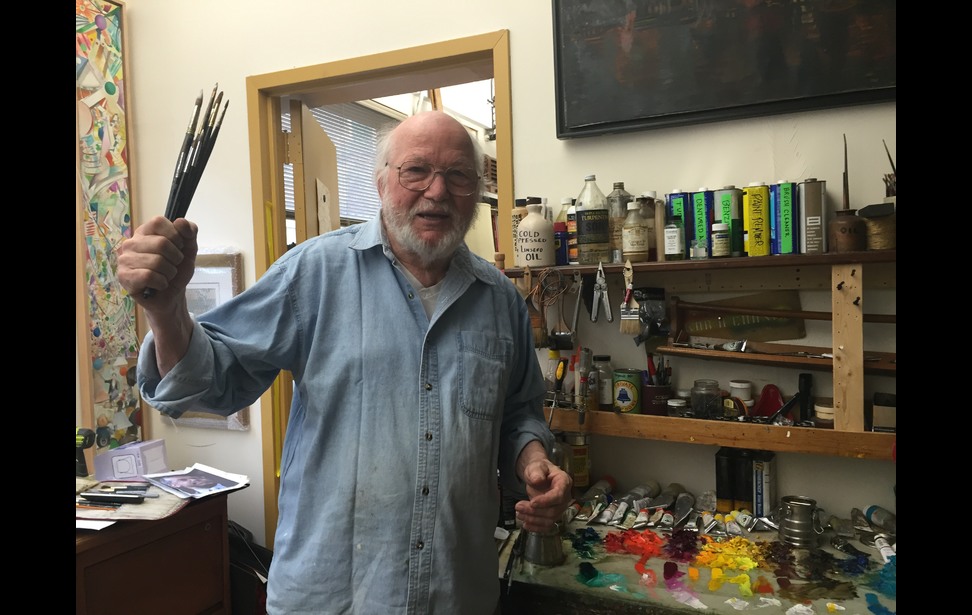 You might not expect much tender concern for legitimacy in a film called Art Bastard. Its subject, artist Robert Cenedella, trumpets his rogue status with glee. But Victor Kanefsky’s empathic character study probes the soft underbelly beneath the swagger and exposes the scars of not belonging. Unless you’re a cold-blooded bastard, you’ll come away from this visceral portrait of sentiment, conscience and humor not only enthralled but ready to write your local museum.

The documentary opens with shots of New York City played over a jazzy, propulsive score. Already from the first frames you see what the artist sees: steel towers jutting in the background, a gush of humanity, chaos in motion. This is the playground that Cenedella has called home since age 12 and whose pulsing streets, raucous sporting jousts, grand concert halls and lusty barrooms have inspired his tableaux to this day.

It’s also where his signature style of agitation and charm, social realism and caricature was snubbed by the art world. In post-war America, the high priests of Abstract Expressionism, Pop Art and Op Art made no room for his figurative and satirical compositions informed by painters from Pieter Brueghel the Elder to George Bellows.

As Cenedella says on camera, “It’s not what they show that bothers me; it’s what they don’t show. It’s a form of censorship.” Sporting a paint-flecked denim shirt and rumpled work pants, he reprised this cri de coeur when I visited him in his mid-Manhattan studio one moody afternoon in late March. The spit has not gone out of Cenedella, but at 75 he still smarts under the rejection of the cultural powers that be, even as he celebrates his five-plus decades of fierce independence. Make that six, if you count his scholastic career. A reluctant pupil but a ready troublemaker, Cenedella lampooned his high school’s bomb drills and refused to sign a loyalty oath, leading to his expulsion.

The artist’s sky blue eyes clouded over and filled with drops a half a dozen times as he recalled the bittersweet arc of his fate. This same raw, confessional intimacy suffuses Art Bastard and invites anyone who has ever felt like an outsider to relate and rebel. By braiding together three thematic strands — Cenedella’s life, work and times — veteran editor-turned-director Kanefsky sidesteps the worn grooves of a this-happened, that-happened chronology and instead engages with the stories behind the paintings, which themselves engage with the surrounding world.

Cenedella had felt the tug of a just cause from early boyhood. At age 6, as noted in the film, he overheard his mother taunt his father for not being “Bobby’s” biological parent. When I asked Cenedella about that formative moment, he grinned, “I’m a card-carrying bastard!” A beat later he added, with a catch in his voice, “I feel as isolated from the art world as I did as a kid from my family. I always thought that art would save me, and in a certain sense it did, but it’s been a tough one.”

If Cenedella père modeled the virtues of principled action as a blacklisted radio writer during McCarthyism, neither he nor family friend Russell Speirs — who would only name Cenedella as his real son on his deathbed — were much in the way of compelling father figures.

Arguably that distinction fell to the exiled German Dadaist George Grosz, with whom Cenedella studied drawing at the Art Student’s League of New York. Looping around in full circle, the film 10 years in the making takes us back to the storied academy where Cenedella now teaches in his mentor’s place. (Another loop for the thalo community is that Grosz settled in Huntington, Long Island, where The Heckscher Museum of Art acquired 15 of his works including the prized Ecplise of the Sun.) An amusing bit of Cenedella lore involves the “I Like Ludwig” buttons he minted during the heyday of Elvis, which hit the jackpot and helped foot his League bill.

Robert Cenedella may not be a household name, but odds are you’ve seen his cartoon-like, carnivalesque crowd scenes without knowing their origin. Perhaps the best known of his works is the restaurant mural he did for Le Cirque restaurant. "Le Cirque, The First Generation" is  awash with the faces of its famed habitués — 157 specimens of le tout New York — and seen from above so that their singular social stature is reduced to a patch of popular rabble. The Madison Avenue establishment has a theatrical whimsy, bathed in candy paint, as if the artist himself were coming from a puppet show. This folksy homage to snobbishness is surely as close as Cenedella has gotten to a nod from those embarrassed by his storytelling.

Among the standouts of his scene paintings is “Southern Dogs,” an Expressionist broadside featuring cops with canine heads and canines with cop heads, none of whom share the principles or the wit of its maker. “Third Movement,” which is part of his mid-80s orchestra series, posits Hitler as the conductor and outfits a collusive audience with mustaches. With “2001, a Stock Odyssey,” both the New York Stock Exchange and the commodification of art come in for a skewering. In the event Chris Concannon, a collector of Cenedella's art and Art Bastard’s producer, partnered with the artist to sell shares of stock in his canvases. Whether scrawling “bullshit” across a Mark Rothko abstraction or turning Richard Nixon’s face into a dartboard or mounting Santa Claus on a crucifix, Cenedella’s handiwork generally lands somewhere on the continuum between mischief and credo.

Throughout the film each featured opus is set to music that matches its energy and mood. It’s as if the filmmakers were suggesting that the artist has synesthesia and, if it’s this much fun, you should too. The frequent layering of sound effects only adds to the party. In “Father’s Day,” for example, you can literally hear the crowd cheer and the fight bell clang as the camera surveys Cenedella’s two dads slugging it out. All the rhythms point to one thing: Cenedella is a one-man band.

What is art? What isn’t art? Who decides? This line of questioning is a running motif of the film and the conversation that Cenedella has worked ceaselessly to provoke. A key plot point backtracks to the pivotal event of his career: the “Yes Art” exhibition he mounted in 1965 at the Fitzgerald Gallery. Boasting such Cenedella masterworks as “Brillo Descending a Staircase” and “Souperman,” in which the superhero paints a can of Campbell’s soup, it constituted a mordant poke at the business and hype of contemporary art, as epitomized by Andy Warhol.

Art Bastard viewers will relish Cenedella’s conceit of charging gallery patrons $7.95 for a Brillo box that he put together and signed, as opposed to the $6.95 it’d cost if they did the honors. Whereas Warhol reproduced S & H Green Stamps and dubbed them art, the gallery gave out real S & H Green Stamps with each sale. “We had a scale and we’d weigh a piece of art and sell it by the pound, so it was more or less like a supermarket,” Cenedella recalled. “When we’d make a sale we’d ring a bell.”

How did the monarch of Modernism respond? I wanted to know. “Warhol came to the Yes Art show and wrote “No” in our guest book,” Cenedella told me with a guffaw. But others showed up in solidarity. “Edward Hopper came almost every day because he obviously agreed with my take on it.” Echoing an observation that he makes on camera, Cenedella said, “You’ve heard about a bad Hopper or Rembrandt, but you never hear about a bad Pollock. They’re either all good or all bad.”

Yes Art was a watershed for Cenedella, albeit not for Pop Art. In a bracing move, he gave up painting and only retrieved his palette in 1975. “I said I signed with an agency to get away from the commercialism of the art world,” he quipped. Looking back on his audacious stunt, Cenedella expresses both vindication and frustration. “Historically I was basically to predict the course of art, because everything I did in that show as a joke has now been done seriously, including a live sculpture, which Warhol did 12 years later. I can really say that my voice about how the art world has gone since 1965 till now was correct. I see what’s happened with the commercial aspects of museums, that they’re all about their little stores, selling this, selling that.”

It’s one of the paradoxes of this gorgeously complex man that what earns his contempt is also what he in some measure desires. “Fifty years of fighting! Cenedella grumbled. “If you’re a museum, how do you justify ignoring me? You can’t say you don’t know about me, because I’m the most widely written-about unknown artist in America. Isn’t there one place where I could fit in?”

Cenedella’s love-hate relationship with the high art establishment also shapes the film’s narrative. You could almost say it unfolds like a sophisticated comedy of mismatches. I wondered aloud whether Cenedella felt that Art Bastard ended on a hopeful note. After all, he’d managed to create his own art world, just as he’d been legitimized by Speirs’ recognition of paternity. And if nothing else, the onscreen commentary of Guggenheim Museum head Richard Armstrong (interviewed by the filmmakers in a theoretical discussion), indicated some simpatico with the outsider artist’s plight, no? Cenedella granted that his bastardly credentials might be slightly attenuated, though he set the record straight on Armstrong: “What’s interesting is that he never asked whom the film is about.”

For a production that clearly appreciates irony, it’s a curious choice to leave out such a zinger. Come to think of it, a brush with the likes of Armstrong could have lent bold finishing touches to what’s essentially a rehashing at the film’s end. But these are minor blots in an otherwise spry portrait.

With the May release of Art Bastard — and with the ongoing democratization of art — things may be about to change for Cenedella. New York’s Angelica Film Center, one of the arthouses where the film is slated to run, will exhibit seven of his paintings in the lobby of the café. There’s even a new painting to be unveiled at the premiere. Entitled “The End of the World,” it passes a color-drenched sentence on the absurdities of the times. (Hint: Look for Donald Trump in the hubbub.)

So what advice does Cenedella have for aspiring artists as the apocalypse approaches?

“Don’t give up your day job. You can bastardize everything else, but not your art. Otherwise, why be an artist?”

2) Photo of Robert Cenedella’s “The Death of George Grosz,” courtesy of CAVU Pictures.

7) Photo of Robert Cenedella’s “Santa on the Cross,” courtesy of CAVU Pictures.

10) Photo of artist Robert Cenedella in his studio by Laura Blum.