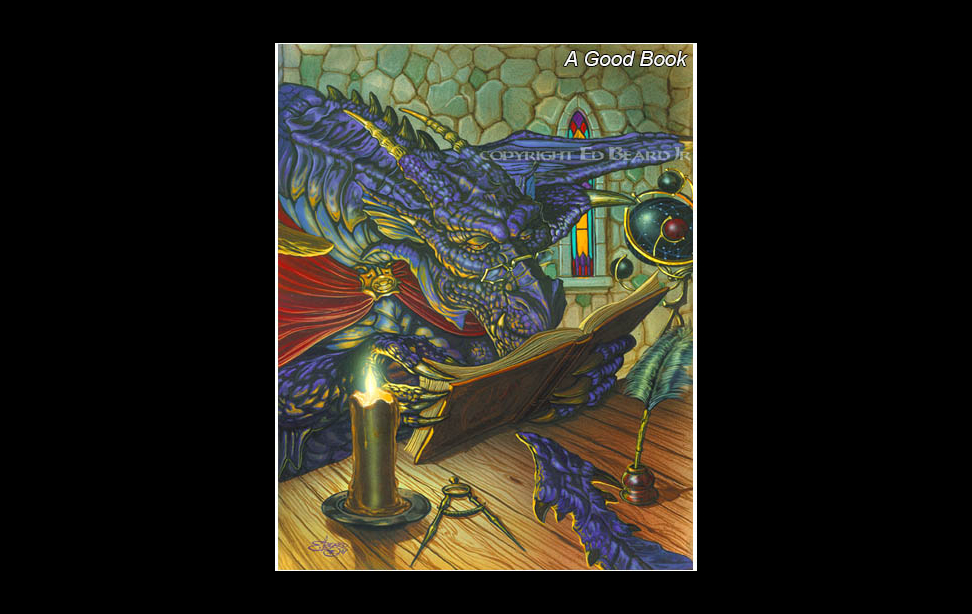 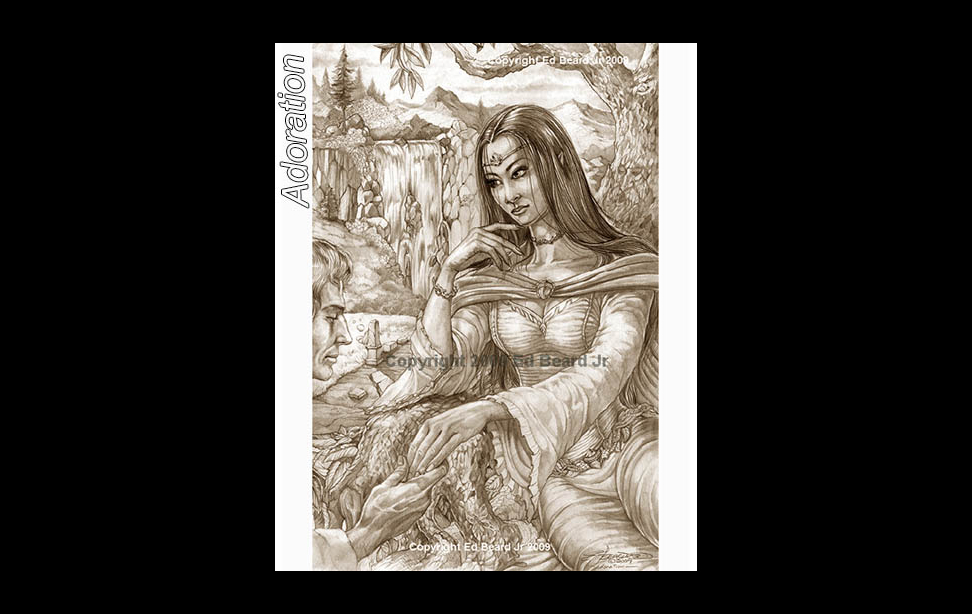 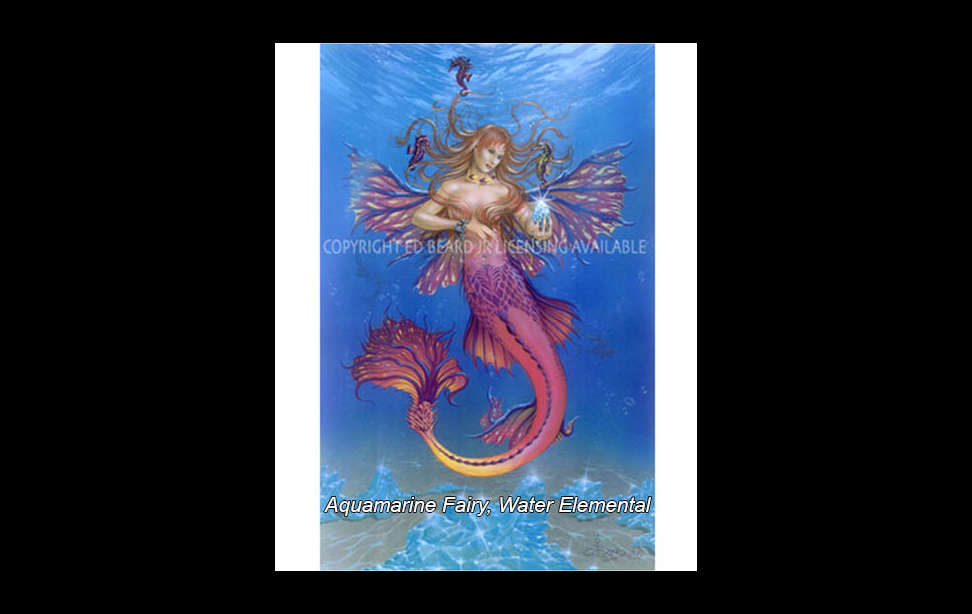 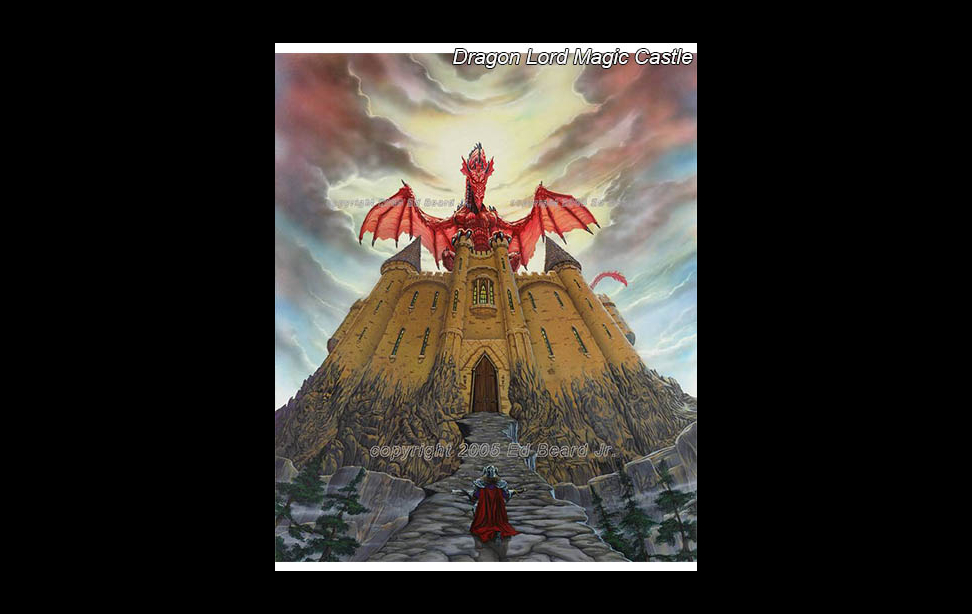 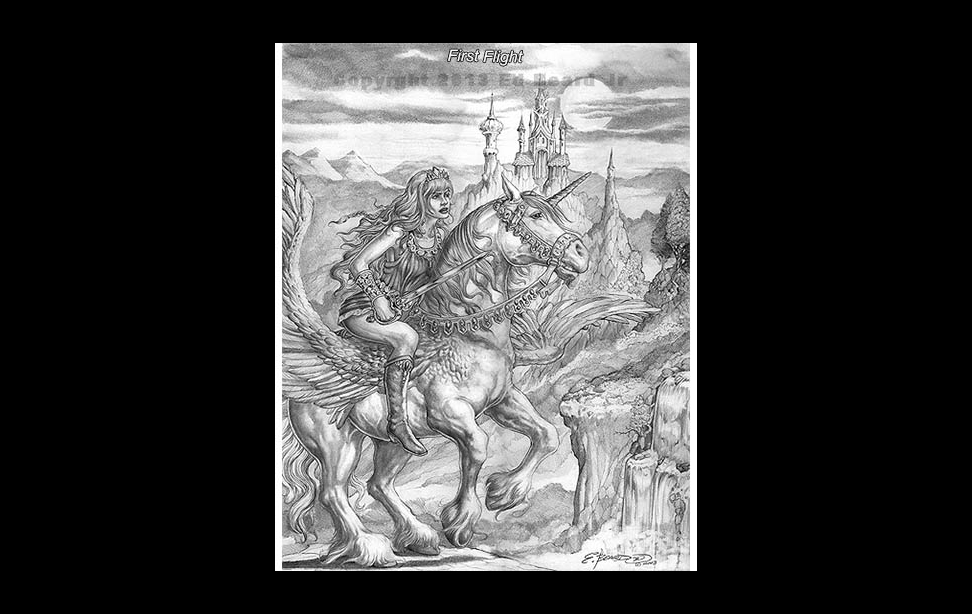 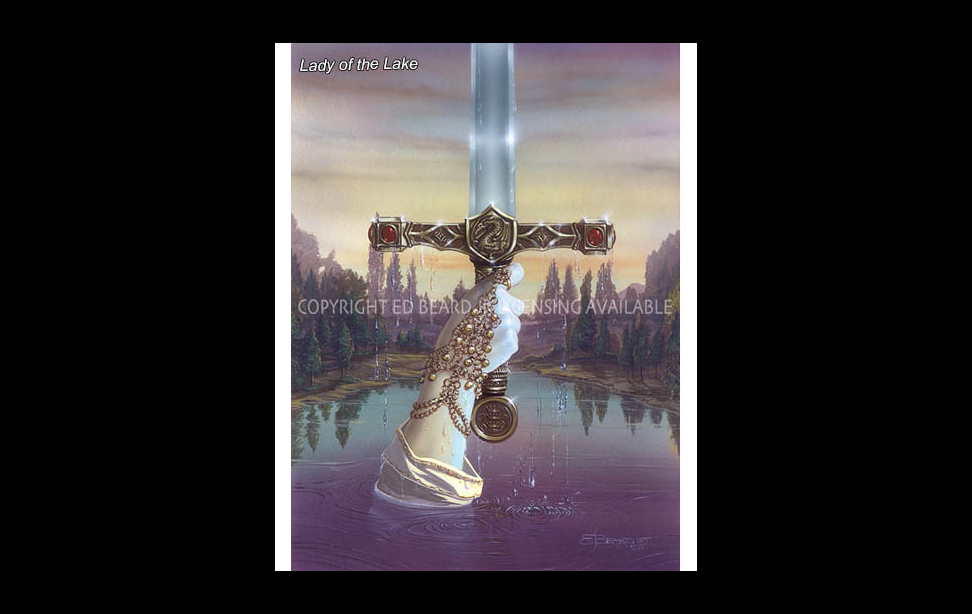 "What we do in life echoes in eternity." ~ Gladiator

Ed Beard Jr. is one of my favorite artists. His work is uncannily magical. I first met him at the Florida Renaissance Festival and we have kept in touch ever since. I can always enjoy the ongoing photo documentary of his latest artwork on Facebook, and am always impressed with his paintings. He took some time in between setting up at the Tampa Renaissance Festival to chat with thalo.

thalo: For those of us who do not know, tell us about how the Card Game of Magic catapulted you to success?

Ed Beard Jr.: I was a self-employed artist for 15 years before I started illustrating for Magic The Gathering and Dungeon and Dragons. After 15 years of doing sign work and automotive airbrushing, with the occasional oil portrait or cathedral mural on a church, my aspiration to get into fantasy, sci-fi horror, and comics drove me to seek out where the fantasy game and magazine or book industry met up with artists like myself. So, I went to a local comic book store and asked if there was any place I could go to find out where these companies exist. Keep in mind, there was no Internet at that time and no way you could look up where the convention or company was, other than going to the library and looking in the Thompson register - which was never updated in any library so I sent resumes in to the companies' address on the back of their products. After a couple of years of rejections, I found out where one particular game convention was held. I packed up some samples of my paintings and headed up to Wisconsin to go to a show called Gen Con where the editors of TSR Dragon Magazine, Dungeon and Dragons, and other game manufacturers came to my booth. All those who looked at my art, nearly everyone gave me their business card and asked me if I was interested in working for them. I remember thinking to myself “These are the same companies that rejected me over the last two years with the exact same artwork that I sent in.” I laughed to myself while I thought of all these years, and all I had to do was be at the right place at the right time. From that point on, one publishing gig found another, and over those years (because I did everything old-school handcrafted / hand-painted), I built quite a collectors audience of my original artwork, which today sustains more than 80% of my income.

During this time, the art director from Wizards Of The Coast came to my booth at Gen Con and asked me if I would be interested to work on the card game, Magic. I didn't initially agreed to. It wasn't until after the first release, I realized this product was incredibly popular and internationally received. So, the following year I gave it a shot, illustrating for the Legends Set, creating for dragon related images including a card called Nicol Bolas. Nicol Bolas became very popular in play, and was an icon for the original Magic the Gathering card game. Over the next 10 years and well over 100 cards, I was invited as Guest Artist to many different tournaments and pre-releases. These shows were all over the world. This resulted in developing a following for my art in Germany, Sweden, Japan, Canada, etc… There is no question that thanks to this card game, my artwork appeared in countries that otherwise would've been difficult to get my work in front of. It was the international nature of the product that contributed greatly to my artwork being known across and outside of the United States.

th: Do you prefer painting on automotives or canvases?

EB: Painting on canvas or illustrating (be it black-and-white or color) for books, games, or private commissions has its own special rewards and challenges… bringing the written word to visual reality or capturing a clients concepts or ideas of a character or their favorite story is incredibly challenging and at the same time rewarding. Of course, most of the time when I am doing that, I am in my own home studio, which has its advantages. However, when I work on airbrushing custom hot rods or motorcycles, there is a much greater difficulty and technical challenge in controlling the medium that is being used - not just the airbrush - but also the material. You are painting on a curved surface, many times trying to create the illusion of depth in reality. So, you are faced with three dimensions and not just a two dimensional surface to translate and work with the beauty of the curves and metal. There is a synergy and harmony that must be achieved between the shape of the hood, fender, or motorcycle tank, and the overall machine. Many times the artwork you do on some of these amazing works of art in metal and machine is a final enhancement, many times, to describe a theme, or to tie in the entire body from front to back. Also, and more often than not, the subjects represent extremely personal and inspirational subjects that the owner wishes the machine to be an extension of them, as found with motorcycle work especially. When you're done with countless hours of airbrush and fine brushwork on one of these machines, it becomes somewhere between a sculpture in a painting and your work is part of a whole - both the beauty of the machine and the intricate details and subject of the paint

th: Do you travel the states and attend Renaissance Festivals to sell your art?

EB: I have been traveling across the US doing Renaissance Fairies since the late 1990s. I also attend many conventions each year. I believe it is essential to meet and get to know the people who collect your work. It also gives you an opportunity to be inspired by the many ideas that your collectors will provide you with, such as images and subjects they would like to see from you.

th: What is your favorite piece of art you have created?

EB: By this point, I have done thousands of illustrations and I've had many different favorites along the way for a variety of reasons. Sometimes it was because I reached a new technical skill set benchmark and other times it was just because of the personal dream or goal I set to create a character or an image that epitomized what I personally would've loved to have seen. I can only say that my most favorite piece is usually the last piece I've done because I am forever striving to improve and reaching new benchmarks. You never, ever reach the ultimate level of satisfaction if you are a true creative person. I can tell you is that almost always the piece that I felt was my best is normally the piece that is least well received and the piece of work that I felt had the least amount of effort skill or benchmark reach winds up being the crowds favorite. Good thing I'm not my own customer (laughs).

th: When you were in Elementary and Middle school, you were influenced by the Renaissance Masters. Do you have any more contemporary favorites?

EB: Indeed when I was young and just getting into developing my basic skill sets, I did turn to the great Masters of the Renaissance, which was what initially inspired me to get into fantasy art, indirectly. However, along the way during my youth, I was growing up in The 1960s and '70's and remember distinctly seeing the amazing covers by Frank Frazetta, Boris, Roger Dean, Larry Elmore, and others who adorned the covers of books and albums of the time. They were filled with imagery of powerful warlords and barbarians and mystical creatures, dragons, orcs, demons, and just about everything you could imagine that was wicked and awesome.

th: I love your artwork very much, especially of the dragons and wizards. Which book is the Dragon Reading in Good Book?

EB: I have quite a few images of dragons reading books and in the particular piece you're speaking of, as well as on the driver's side of my hot rod van called the Dragon Lord, we have this same image. It appears he is reading the history of his ancestors and all of the Dragons throughout creation.

Click here for part 2 of our interview with Ed Beard Jr.

You can also view his instructional art videos, to learn from the ultimate dragon master.