Director Nicholas Hytner Rolls with "The Lady in the Van" 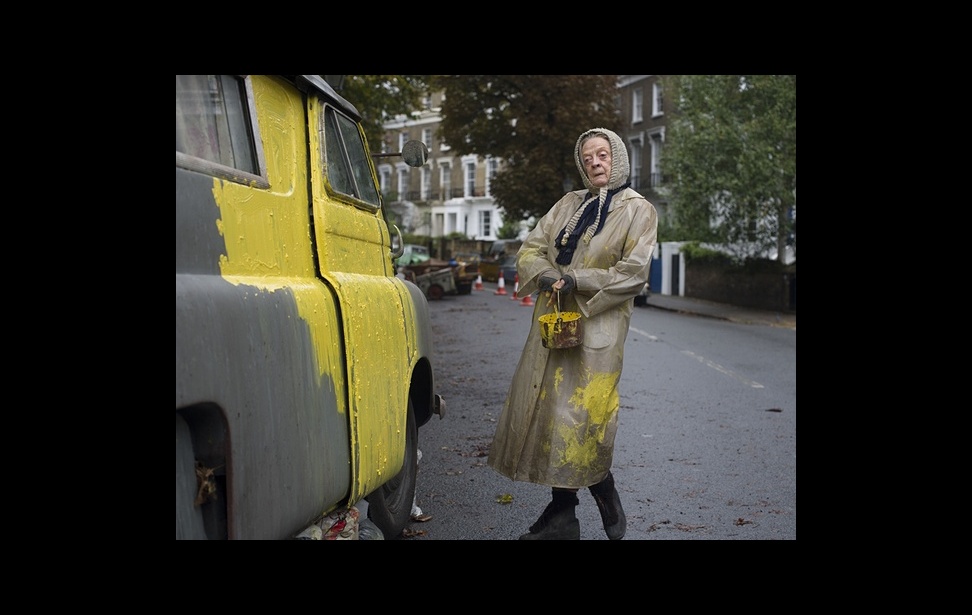 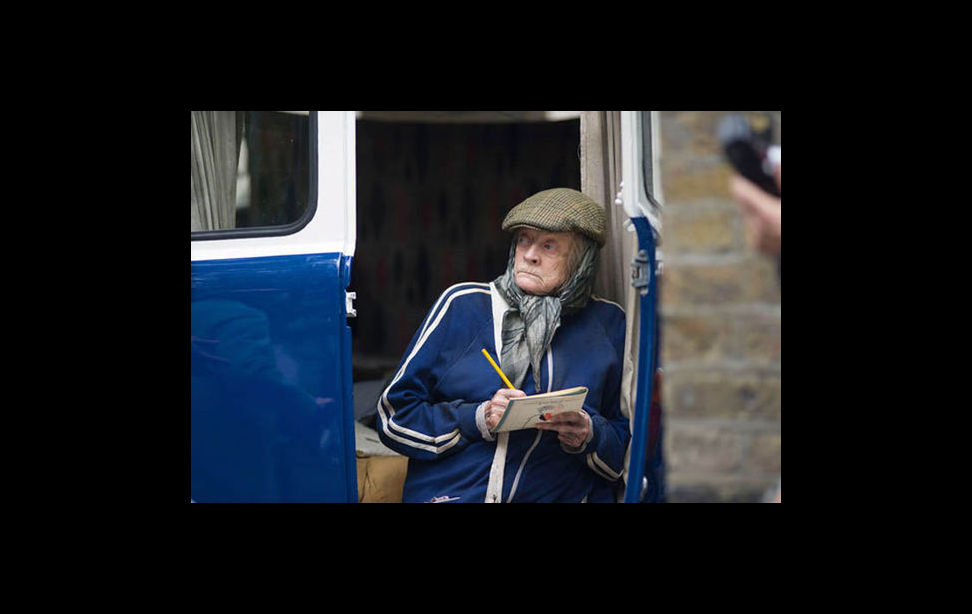 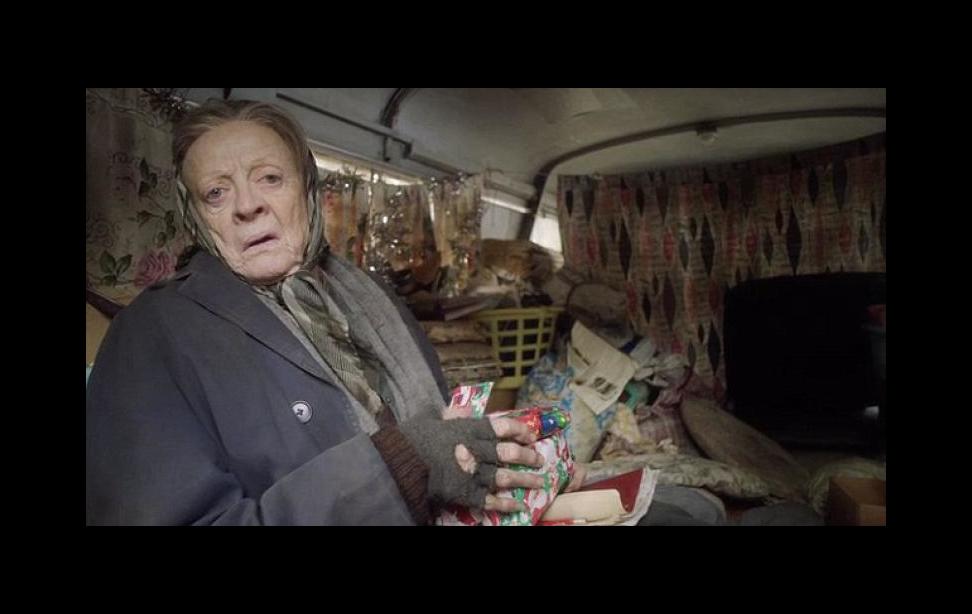 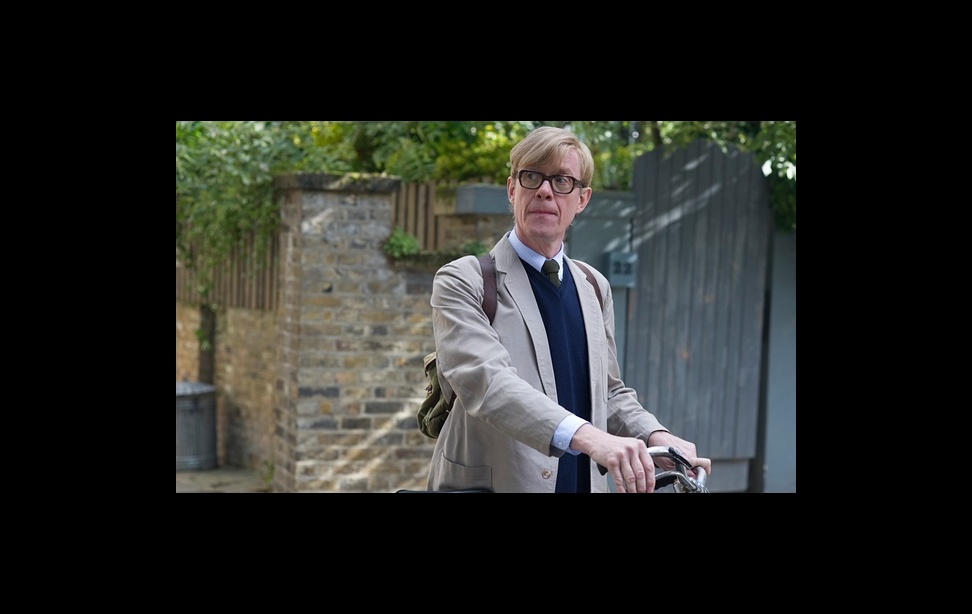 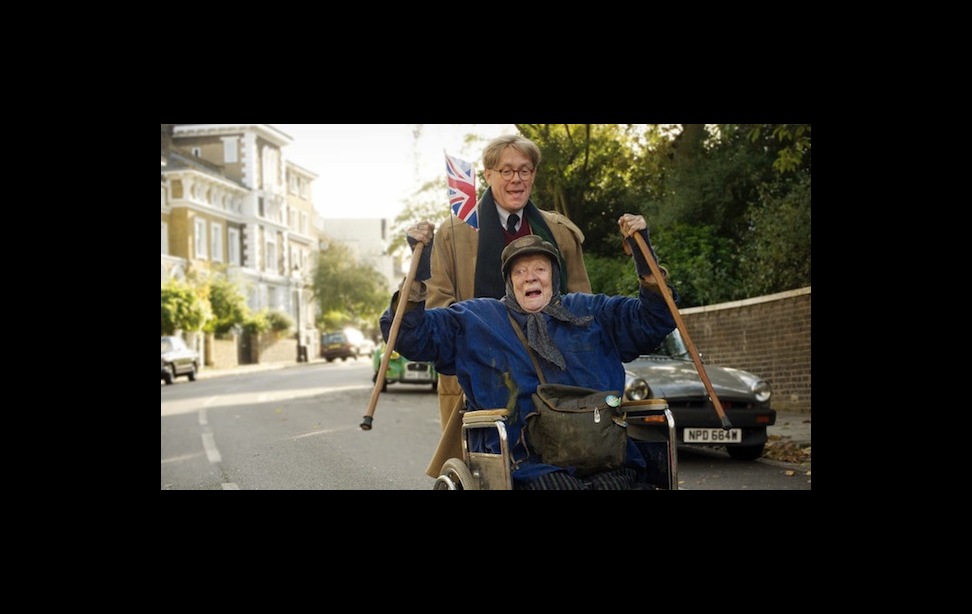 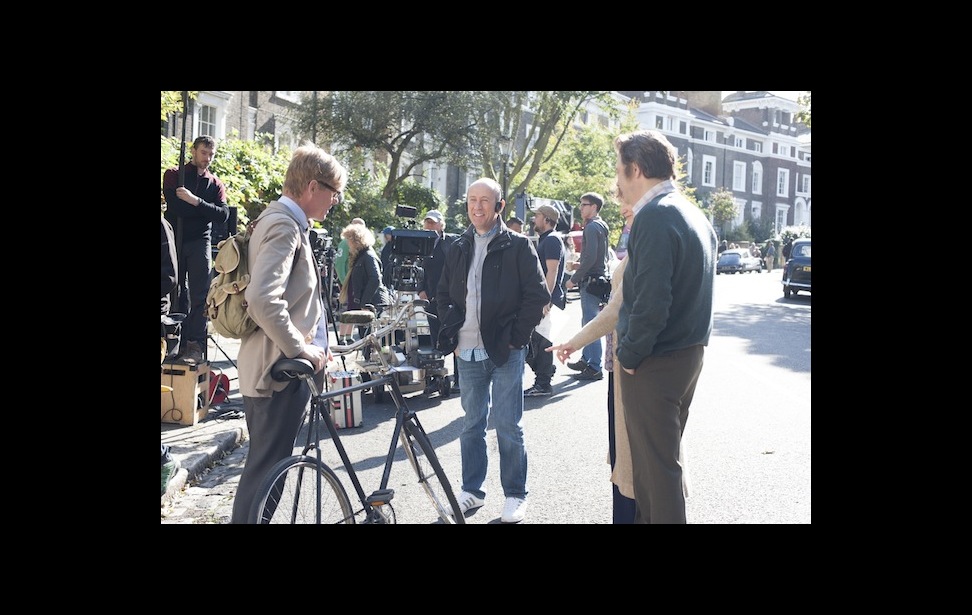 Who is the lady in The Lady in the Van and how'd she get there? Nicholas Hytner's newest film puzzles out this enigma till the end, but one thing's settled early on: she's most unladylike. The title also tells us so. Ladies come in manors, not vans. From here the dualities only compound in what fans of testy British humor laced with poignant pangs will surely find a enchantment.

It all begins with a motor revving in the pitch black and then boom! -- a shriek and a thud. When the screen goes from darkness to light, we see a van barrelling across the English countryside and the woman of a certain age at the wheel. As we later find out, she glimpses the body of the young motorbiker (Sam McArdle) who shattered and bloodied her windshield, and panics. He won't physically appear until the coda, though as a source of trauma and guilt, he hovers over her soul throughout. So too the cop (Jim Broadbent) who gave her chase will come back to haunt her.

That's because she flees the scene of the accident, believing her wayward vehicle was responsible for the biker's death. For the rest of her days, this deeply religious former nun dwells in boxy roadsters like the one that carried out the assault, leaving us to wonder about the destructive engines we metaphorically cling to in our own lives. 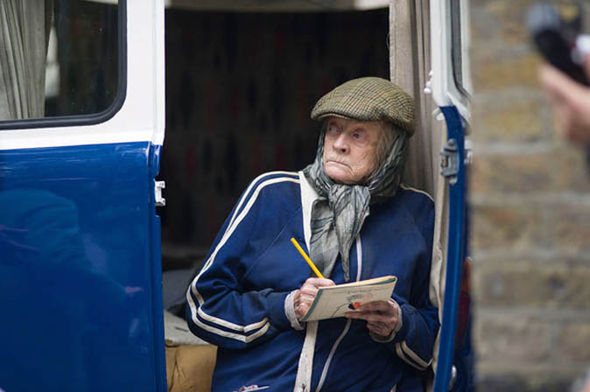 Miss Mary (née Margaret) Shepherd is played in all her dotty magnificence by Dame Maggie Smith. It's a decade later when the smelly old bag lady and her van turn up in Camden Town, a fashionable patch of north London filled with liberal culturati. Hytner has a grand time sending up the hypocrisies of this right-thinking crowd, for whom the only thing more appalling than Miss Shepherd's homelessness is her parking by their homes. There's the well-heeled couple (Deborah Findlay and Roger Allam) who'd even miss a night at the opera to thwart the dreaded van, and the young family a few doors down whose music repels the intruder to their ashamed relief. The Camden chapter begins in the 70s, yet seeing it in 2015, it's hard not to wonder what Camden's denizens would say were a Syrian refugee to enter their midst.

Out of English politeness, perhaps nothing. That may be one reason why local resident Alan Bennett gets himself into a curious ordeal. Does left-leaning guilt play a part? Kindness? Or is it to deter the assaults on her being that distract him while trying to write? “She’d be a good subject for you, one of your little plays,” a neighbor, Mrs. Vaughan Williams (Frances de la Tour), advises. The playwright plainly concurs. He grants Miss Shepherd refuge on his private grounds. The intended interval of three months turns into 15 years.

It only adds to the awe that the view of Miss Shepherd's van is shot from the window of the house where Bennett really lived and where this "mostly true story" took place. During a phone chat with thalo.com "a two minutes' walk" from the original Gloucester Crescent address, Hytner noted, "My responsibility was to look at this story the way he, the writer, looked at it from his desk. This is not a movie I wanted to be scenically cinematic." Rather, the brief for Hytner was "not to get in the way of that very particular and very limited point of view, and to allow whatever was emotionally involving to emerge from that tiny plot of land." 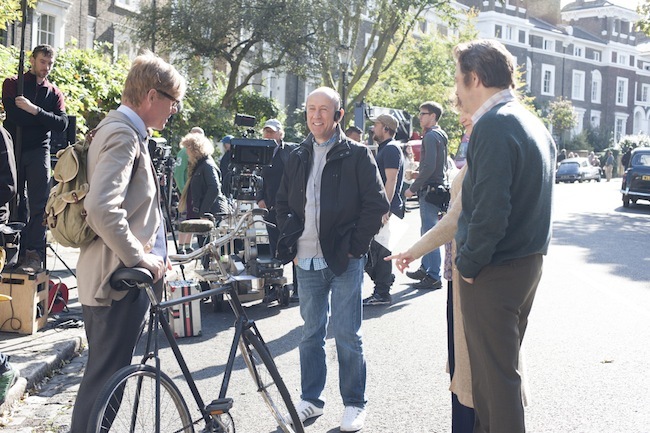 To mine the inner drama, Hytner made a bold casting choice. He tapped Alex Jennings to perform both of Bennett's two selves -- the priggish, cloistered Alan Bennett who writes and his marginally more adventurous alter-ego AB, who goes about life such as it is. The device is as meta as it is meaty. Both bespeckled halves duke out their differences. Yet on some matters they see eye to eye, including the chagrin of putting their unwell elderly mother (Gwen Taylor) in a home far away while her daft counterpart nestles in their garden.

Bennett's dual personas are echoed in the internal tension experienced by Miss Shepherd, an extreme narcissist who is split between debilitating guilt and shame on the one hand and grandiosity and entitlement on the other.  The crusty bigot gets AB to serve her imperious whims and literally put up with her crap. "I'm a very busy woman!" is as close as she gets to acknowledging holiday gifts brought by charitable neighbors. “One seldom was able to do her a good turn without some thoughts of strangulation,” deadpans Bennett.

To hold together her fragile psyche, Miss Shepherd must exert iron control and not succumb to gratitude, kindness or, heaven forbid, concern for another person. It's as if her very foundation might unravel at the smallest expression of human interdependence. A rare glimmer of humility is her unceasing need of absolution for her great hit-and-run sin. The delusional die-hard connects not with mere mortals but with a higher realm. None other than the Virgin Mary advised her to park chez Bennett in the first place, Miss Shepherd lets it be known. Nor does she imagine that her ascetic existence is a matter of personal agency. "I did not choose this life," she states. "I was chosen."

For his part, Bennett the civilian plumbs the notion of free will as it regards creativity. “What I’ve learned and maybe she taught me is that you don’t put yourself into what you write. You find yourself there.” Bennett the writer comes back with a jab at his other self: “I never wanted to write about her. And if there’d been a bit more in your life, I wouldn’t have had to.”

That "bit more" materializes after Miss Shepherd's passing, when Bennett the scribe joins with AB the man and gets a lover (Geoffrey Streatfield). But the blurring of identies gets underway earlier, with the civilian AB taking narrative liberties as he elbows in on Bennett's turf.

If Bennett comes into his own, so too "the noble vagabond" ultimately finds her glory. In an ascension scene inspired by what Hytner described as "the souvenir version" of Titian's "Assumption of the Virgin," she rises campily to the Holy Father and his golden band of putti. "By the time Alan has completed Miss Shepherd as a character, he allows her to write her own ending," Hytner explained. "The idea that she might be received directly into heaven by a vision of her Holy Father is her triumph, her reward for a lifetime devoted to a religious calling that she felt she was not allowed by the nuns."

The Lady in the Van first appeared as a diary for the London Review of Books. After several spin offs, Bennett adapted it as a West End play in 1999, with Hytner directing and Smith starring. The director's 25-year collaboration with Bennett spans two other successful stage-to-screen adaptations, The Madness of King George and The History Boys.

So he knows of what he speaks when he observes, "Alan trained as an academic historian, and it's very hard to get him to depart from the historical record." To be sure, for all its nods to the British comedic tradition of what Hytner terms the "disruptive eccentric," The Lady in the Van takes a sober look at the challenges of artistic invention. "It's about what someone sees from their desk when they sit down and have nothing to write about -- and it turns out that only thing they can write about is the thing that's going on in front of their nose," said Hytner. "The film starts in miniature, but gradually Alan starts to realize that the way he's going to explore this character's life and try at least to get under her skin -- and get under his own skin -- is to speculate."

Hytner continued, "His childhood dominated by strong Yorkshire women; his mother living on for so very long; the appearance of Miss Shepherd in his driveway: to a degree they all feel like a kind of mockery of what he feels when he's insecure about the limitations of his imagination."

Not that Bennett begs to be martyred. Unlike our lady in the van -- who was once a promising musician -- he lives the artistic life with all its messy polarities. Hytner pays proud homage in the film and in his remark: "The writer appears to be observing a man of weak will, who is himself of very strong will. And those who patronize him or take advantage of him, like Miss Shepherd, in the end are the ones who are observers of his creative vision. It's that idea of being in control -- or not -- or being manipulated and yet being the manipulator that fuels him as a writer.

1) Maggie Smith as Miss Shepherd in "The Lady in the Van." Photo by Nicola Dove, Courtesy of Sony Pictures Classics

2) Maggie Smith as Miss Shepherd in "The Lady in the Van." Photo by Nicola Dove, Courtesy of Sony Pictures Classics

3) Maggie Smith as Miss Shepherd in "The Lady in the Van." Photo by Nicola Dove, Courtesy of Sony Pictures Classics

4) Alex Jennings as Alan Bennett Shepherd in "The Lady in the Van." Photo by Nicola Dove, Courtesy of Sony Pictures Classics

6) (L - R) Alex Jennings, Director Nicholas Hytner, Deborah Findlay and Roger Allam on the set of "The Lady in the Van." Photo by Nicola Dove, Courtesy of Sony Pictures Classics