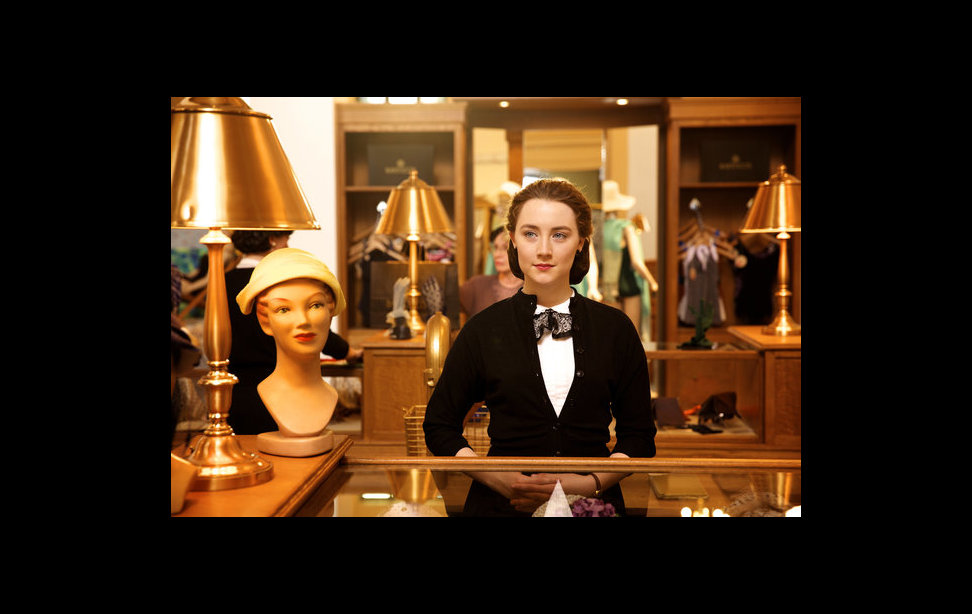 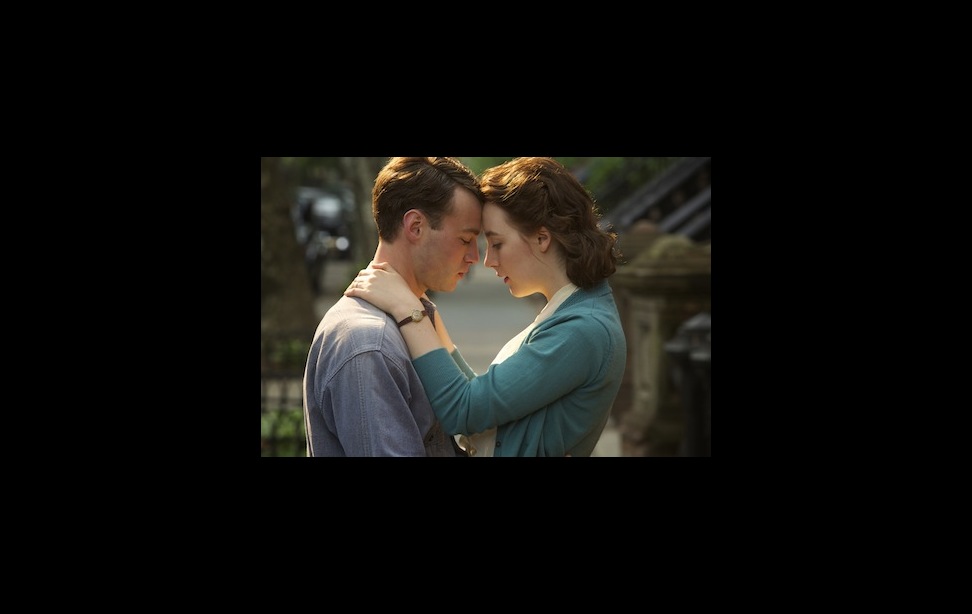 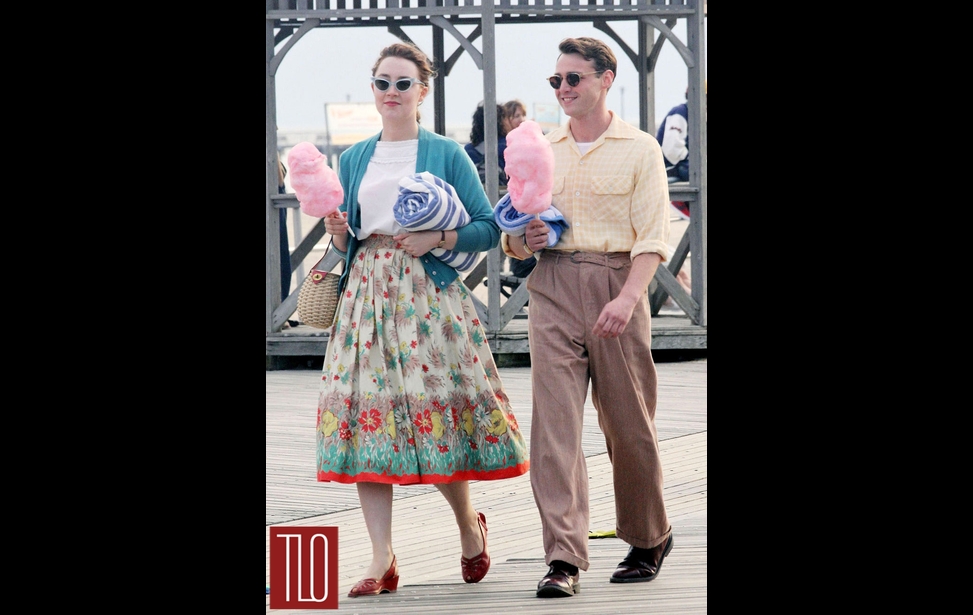 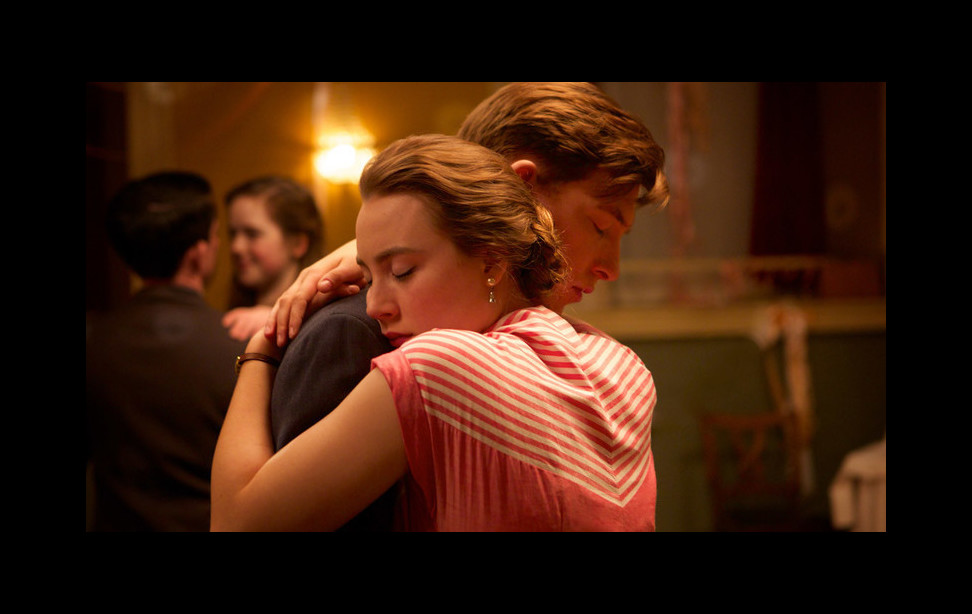 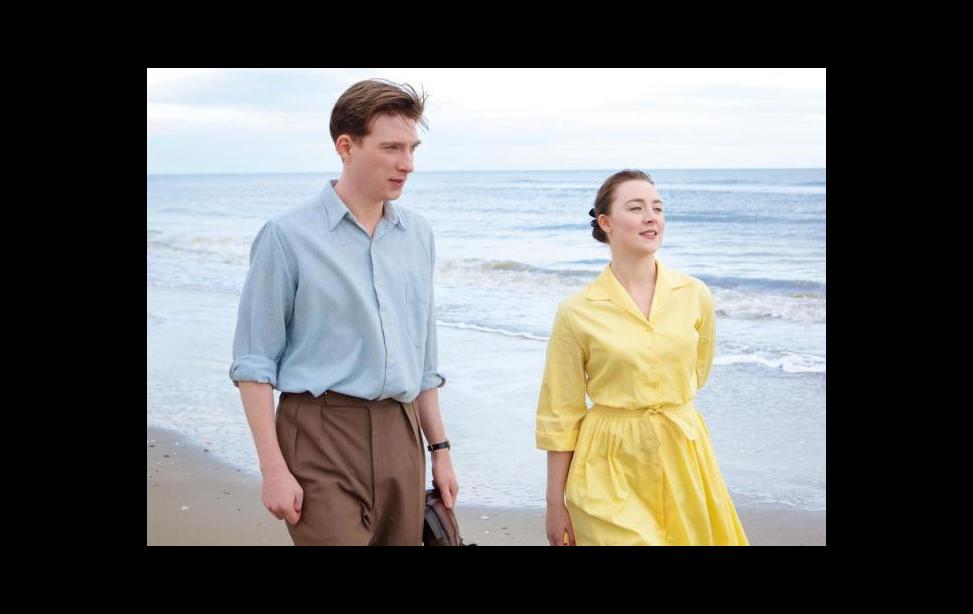 Brooklyn, a period drama starring Saoirse Ronan as an Irish immigrant to America, is about love, loss and what Ronan wore. So naturally thalo.com got with its costume designer, Odile Dicks-Mireaux, to explore the graceful and evocative threads that have Oscar oracles humming.

"This period has such fantastic clothes," was Dicks-Mireaux's first thought when director John Crowley tapped her to produce looks for a cast of Trans-Atlantic characters in the early 50s. Next she delved into Nick Hornby's screenplay and the bestselling Colm Tóibín novel that informed it. And then came phase one of the visual research. For her intial meeting with Crowley, she brought a spread of photographs from the era, including the work of Austrian-born Inge Morath, who had traveled in Ireland circa 1954, and of American street photographer Vivian Maier. "We talked about how we wanted Saoirse to come across on the screen," relayed the BAFTA Award-winning designer best known for her work on Quartet, An Education and The Constant Gardener. "Did she need to be more feminine, less feminine? John wanted her to be totally natural looking."

One subject exuded just the freshness Crowley was after: a certain American actress-turned-Princess of Monaco. "I had some pictures of Grace Kelly, and John felt they were quite a good way to show what Saoirse's character would want to take on as part of her American look," said Dicks-Mireaux.

Brooklyn follows the bittersweet adventures of Eilis Lacey (Ronan), a 20-something ingenue whose limited prospects in small-town Ireland compel her to set sail for New York. Her American dream materializes in no small part thanks to her beloved older sister Rose (Fiona Glascott), who stays behind to look after their mother (Jane Brennan). Soon after reaching the US, Ellis finds lodging at a Brooklyn boarding house run by the niggling yet supportive Mrs. Kehoe (Julie Walters) and employment at a nearby department store under the supervision of Miss Fortini (Jessica Paré) in addition to adult ed classes in accounting. Her smooth landing owes a considerable debt to the kind-hearted priest (Jim Broadbent) who also sponsored her arrival. Life in a new land is a mix of homesickness, culture shock and discovery, which becomes considerably rosier when Ellis attends a community dance and meets Tony Fiorello (Emory Cohen), a good-natured Italian plumber who soon sweeps her off her feet.

Their love affair is interrupted by a family death that summons Ellis back to Ireland, where her mother and her best friend shamelessly match her with an attractive bachelor (Domhnall Gleeson) on the hopes of keeping her put. Torn by competing loyalties and affections, Ellis must face the wrenching choice of which shore to call home.

Picking apparel to help tell the story gave Dicks-Mireaux her own share of dilemmas. "I thought, What would a girl have when she leaves Ireland?" the designer recounted. "Her journey was very hard, so I created a wardrobe that I thought was real: she had a skirt; she had a little tweed suit that was maybe a bit small and she had a raincoat," said Dicks-Mireaux, mentioning the few additional items that a budgeted mid-20th-century immigrant would likely pack. "I limited myself really strictly," she said.

A similar line of role-playing enabled Dicks-Mireaux to select Ellis's clothing once she's employed at a department store and provided with a couple of smart black-and-white outfits. "What would she buy first?" the designer wondered. "I bought her that red corduroy jacket in my head, and then I bought her that yellow cotton dress," she said, adding, "I imagined the excitement of buying new clothes when you earn your first wage packet." Another big challenge was picturing how Ellis would suit up for her return to Ireland. "I figured, before she goes back she buys a couple of dresses. I was trying to think how a young girl would think at the time, knowing that she couldn't buy a huge amount because it was expensive."

Dicks-Mireaux's own shopping sprees involved scouring vintage shops, fairs and costume houses in her hometown of London, where she also browsed visual references at the British Library. This meant repeated visits to stock collections such as Carlo Manzi Limited and Movietone Frocks and to Portobello Market -- after digitally trolling the Irish stills of the Kennelly Archive. But the costumer's quest began with a trip down memory lane. Having grown up in the late 50s and early 60s in London, Dicks-Mireaux herself was acquainted with the look of post-war Europe. And then there was her parents' photo album, dating back to when they first met in 1948. "In the same way as my mother, who was French, came here and married an Englishman and they went to start a new life in Switzerland, Tony and Ellis are both young when they meet and start a new life in America," she mused. Beyond helping Dicks-Mireaux conceptualize the characters' situations, the family scrapbook enshrined the fashions of the times. "My mother had a yellow dress like the one Ellis wore," she said.

That little number came from a vintage boutique in Montreal, as did such wedding attire as Ellis's pinkish-red striped dress and apricot gaberdine suit. "They were so un-English, those colors. And the blue of Tony's suit is very strong; you would never have found a suit like that in England at the time." The Quebec metropolis was where the Manhattan and Brooklyn scenes were shot, though principle photography had wrapped on all of the Irish sequences before crossing the Atlantic.

"I was always carrying the breakdown of all the characters' story days," said Dicks-Mireaux. Fortunately, she's as organized as bookkeeper Ellis. Using a handy system of folders, the costumer created different sections such as: "Research: Department Store"; "Research: Work in New York"; and "Research: Ireland." As she remarked, "It's really great to have a solid groundwork of good research that you just go back to when you're losing your path a little, and you keep steeping yourself in the photographs."

Yet the pictorial references came with a caveat. "Be careful when you look at those photos," Dicks-Mireaux recalled the director saying. "John was very much that the actors had to create their own characters, even though we were looking at references," she explained. "Obviously, for Emory we were going to look at Marlon Brando, but John didn't want him to be Marlon Brando."

So it worked well that the designer's method also favors improvisation. "I'll put together a collection of clothing and start to see what will work for a particular actor," said Dicks-Mireaux of her creative guesswork. "I had no idea if the colors or styles I picked out would suit Saoirse, but she put them on and they just looked fantastic on her." By the same token, the filmmakers winged it with the written story. For example, as the boat nears Ellis Island, Ellis's cabinmate advises her what to wear for immigration. "In the book Colm describes a floral dress, but that would have meant another dress," said Dicks-Mireaux. So the team went with a brown moygashel linen frock with white dots that worked for both Soairse and her character and, as Dicks-Mireaux put it, "that you would believe."

What was the actress's input? "Saoirse loved the yellow dress -- that it made her feel like there was a change in her, that she was suddenly wearing more grown-up and womanly clothes than the slightly little-girl look that she had when she left Ireland," said Dicks-Mireaux. "I didn't plan it. I just thought, I love the skin tones."

Brooklyn is quite the designer's paradise with its rich opportunites for establishing character arc. As Ellis goes from wide-eyed innocence to developing a clear vision of her destiny, how did Dicks-Mireaux couch her maturation? "Gradually you see the original Irish clothing fade away, like the bluey-green dress that she wore at the dance hall." The new Ellis shows off her silhouette with the self-possession of a young startlet, horn-rimmed sunglasses and all. So much so that Ronan herself admired -- and was given -- one of her New World acquisitions: a cobalt knit top studded with pearlescent shells. "She comes back to Ireland with bolder contours and colors, and people regard her in a different way than they did when she first left," said Dicks-Mireaux. "She was a nobody and now she's this very glamorous character." Fuggedabout Grace Kelly. The style here is pure Brooklyn.

Brooklyn was screened at the 53rd New York Film Festival and opens in theaters November 4.