Director James Vanderbilt on the Look of "Truth" 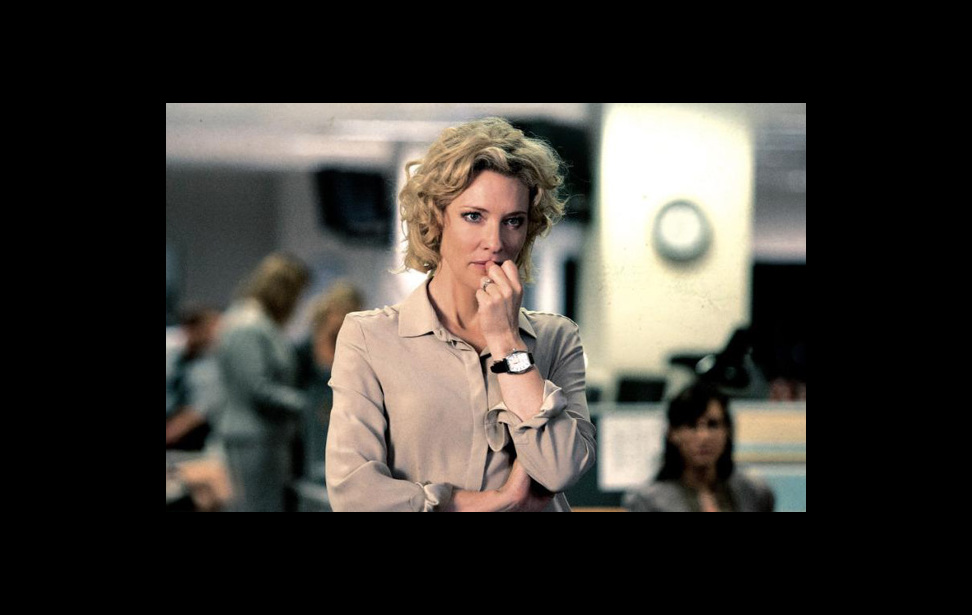 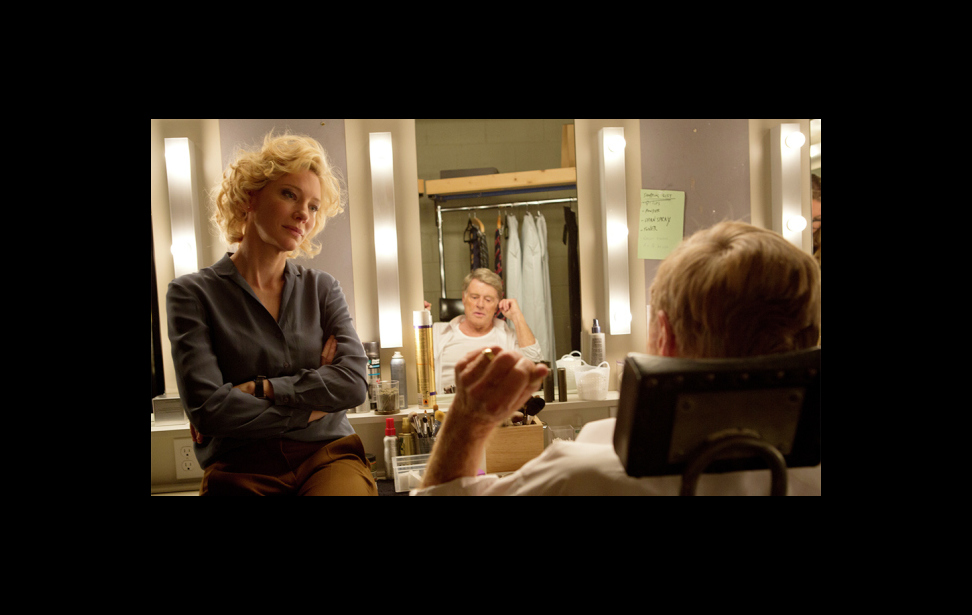 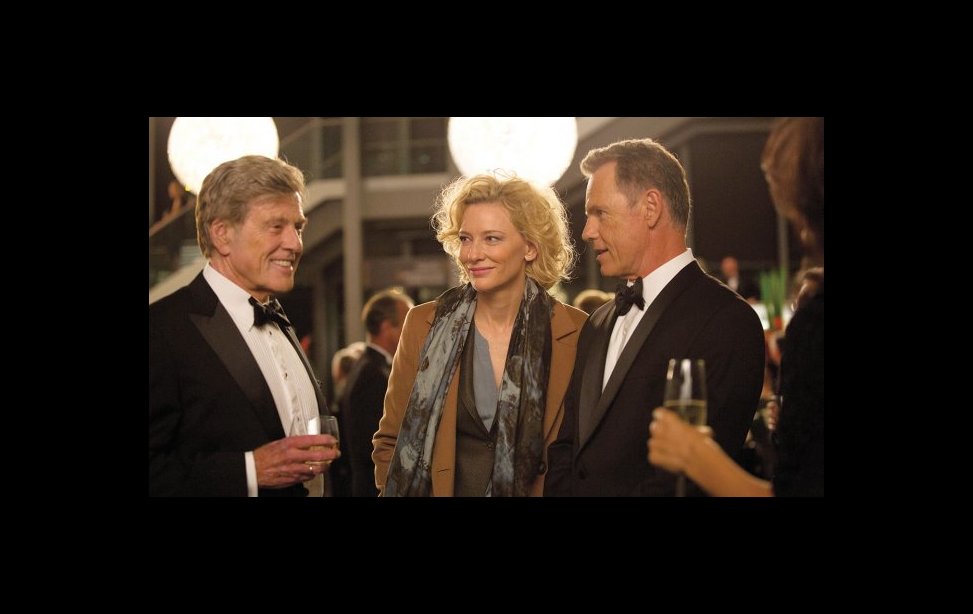 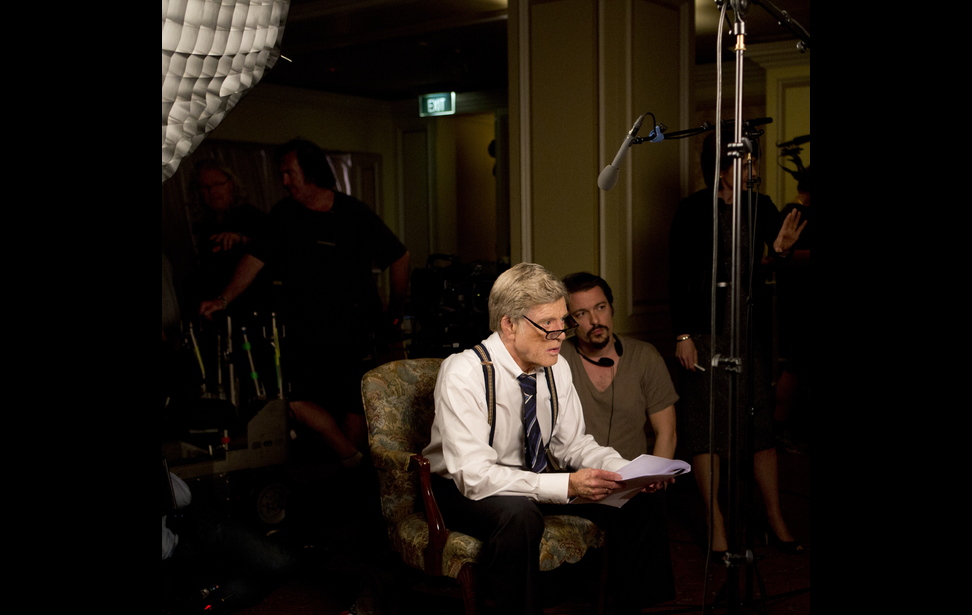 Here's how writer/direct James Vanderbilt visualized Truth, his dramatization of the Rathergate scandal that surrounded a questionable "60 Minutes II" story produced by Mary Mapes in 2004. Vanderbilt "wanted the film to feel very lush and full of life at the beginning, and as things turn worse and worse, the color is gradually pulled out, so that by the time you get to the climax, it's a very stark black and white," as he told thalo.com. Played out across the cinematography, lighting, production design and costumes, this gradual loss of vibrancy parallels Mapes's (Cate Blanchett) professional and emotional journey.

The CBS news show producer had built a solid reputation with such gets as interviewing death row candidate Karla Faye Tucker, smoking out Strom Thurmond's black illegitimate daughter and exposing the travesties of Abu Ghraib. When we meet her in flashback, she's at the height of her career and following a hot tip.

With the presidential campaign in full swing, the piece was slammed for using bogus evidence and for being politically motivated. Rather famously apologized and was ultimately asked to resign a year early, and Mapes, Smith and two other news executives were fired.

Mapes's version of what happened came out in her memoir Truth and Duty: The Press, the President, and the Privilege of Power. Vanderbilt read an excerpt in Vanity Fair, and soon optioned the book for his screenplay. Unlike the furor that ensued over the accuracy of the aired documents, Truth argues a larger issue: that the essential point that the CBS journalists were making was lost in a perfect storm of political, commercial and journalistic forces that make speaking truth to power increasingly dicy in the era of corporate media, lobbying, talk radio and the blogsphere.

Yet for all its pronouncements, what most spoke to Vanderbilt about the project was its potential as a character study. "I was fascinated with the idea of meeting a woman at the top of her game and revealing who she is by what she goes through," said the director, whose writing credits include The Amazing Spider-Man, White House Down, Independence Day 3 and investigative thriller Zodiac. "What you find out underneath is this very sad story of someone who was abused as a child who grows up and builds all these layers of armour around herself. And then those layers are stripped away one by one until we get back down to the core of that scared little kid that's in all of us." He went on, "When her father comments on her during that radio show, it's the ultimate violation. She has built this safe place and suddenly she doesn't feel safe anymore." Carefully crafted to induce squirming, the film plays like a journalistic thriller in parts.

Truth revels in three genres. "The first act is about putting together the team, as you see in an action film where there's an objective like: We have to go take down Al Capone," said Vanderbilt. "The second act is a bit of a detective story, which is what journalism is. The second half of the second act, where the story they're working on starts to fall apart, is about the chickens coming home to roost, and that sets you up for the third act, which is almost a courtroom drama."

Knowing that Truth's progressions required a versatile and experienced eye, the first-time director partnered with cinematographer Mandy Walker, whose credits range from journalism saga Shattered Glass to outback adventure Tracks to psychological thriller The Well. For starters the filmmakers combed Vanderbilt's script scene by scene and consulted kindred films including All the President's Men, Margin Call, Michael Clayton and The Parallax View.

However, despite Truth's genre promiscuity, Vanderbilt, 39, envisioned it having a "classic feel." Walker obliged by outfitting her Arri Alexa digital camera with anamorphic lenses. Shooting in anamorphic not only evokes the sensibility "of films you grew up with," as Vanderbilt noted, but it also allows the depth of field to become increasingly narrower. This came into play as "Mary becomes more isolated," which the filmmakers achieved by "moving Cate closer to the center of the frame and boxing her in a little." Vanderbilt reported being guided by his claustrophobia as he sought "to cut off her escape route visually."

Working with production designer Fiona Crombie (Macbeth), the Angelino director further closed in on his doomed heroine using television screens. "When Mary leaves CBS for the last time, she's walking through this enormous lobby and there are all these TVs on the wall, and all of them are playing Dan Rather's apology. The idea visually was that there's no way to get away, because there's always another television showing him."

Yet much of the movie -- shot in Sidney, Australia -- involves people talking in enclosed rooms. "There's a lot of information and exposition in the film," said Vanderbilt. "We felt it could be incredibly exciting, but how to keep it visually interesting was a challenge." In no small measure Vanderbilt has the Oscar-nominated editor Richard Francis-Bruce (The Shawshank Redemption, Seven, Airforce One) to thank for translating his idea of a pacy nail-biter to the screen. "We wanted the film to be built classically, but we always knew it had to really move in order to work and not to feel like homework or a history lesson. We talked about how we would put it together and then we would cut it within an inch of its life, barrelling down the track."

That propulsive journey gets an early push from Redford. Vanderbilt detailed precisely how, through a recap of editing and cinematography. "One of the challenges was: Dan Rather is very iconic, so how do we introduce Robert Redford as Dan Rather? We built a scene where Bruce Greenwood (as CBS News president Andrew Heyward) stands on stage and tells you who Dan Rather is, and introduces him and tells you about his accomplishments. Visually the way we shot the scene is: we reveal Redford extremely slowly. First you see him writing on a pad of paper, and then you see Bruce Greenwood. Then we cut back to him and he's writing some more. Then he closes the pad of paper. You see his hands and you see his jacket, but we don't give you his face until the end of the scene where Bruce Greenwood talks about how long he's been in the anchor chair. And then we cut to a shot of Redford backlit and in profile, which I describe as the Abraham-Lincoln-on-the-penny shot. The first time we fully show Robert Redford as Dan Rather, he's introduced and walks on on stage. We visually built that idea of, Ladies and Gentlemen, Dan Rather!"

The choice of camera angles helps editorialize Rather's fall from grace. "At the beginning of the film, we shot him from a very low angle, so he's towering above us," explained Vanderbilt. "One of the last times we see Dan, when he says he's stepping down as anchor, we're shooting way above looking down on him. So near the end of the film we see how small and just like us he is."

By contrast, the angle from which Mapes is shot from the start anticipates her ordeal. "The first time we see Cate, we're looking straight down at her in this lobby where you can see three different levels -- she's in a middle level. The idea is that she's trapped in a little bit of a maze," Vanderbilt remarked. If it's tougher to identify with her network father figure, no such barrier keeps us from cringing darkly along with Mapes.

Which brings us back to color. Just as the palette of the set serves to paint mood, so too Amanda Neal's costumes chart the characters' sobering transitions. "We always knew that we were going to come at it from a place of: Mary ends up in Black Rock wearing a black suit in a very severe room," said Vanderbilt. Similarly, the cinematography becomes less saturated and rich. "The idea was to give the viewer a very subtle shift from the beginning to the end of the film, so that by the time Mary leaves Black Rock and gets back to her house, the color has started to come back into the world a little bit for her." It's the happy ending Truth permits.

4) (L - R) Robert Redford as Dan Rather on the set of "Truth" with director James Vanderbilt. Photo courtesy of Sony Pictures Classics.