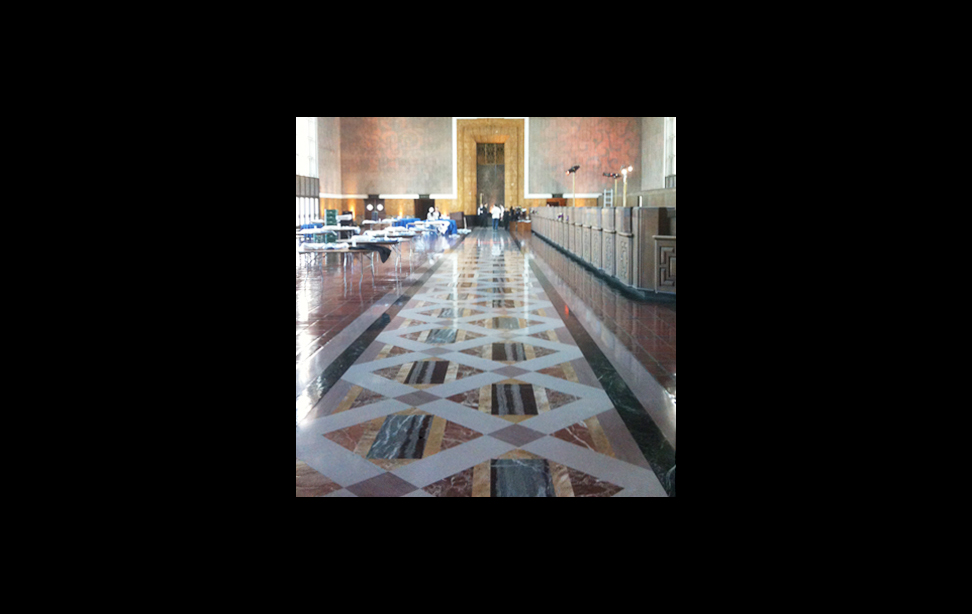 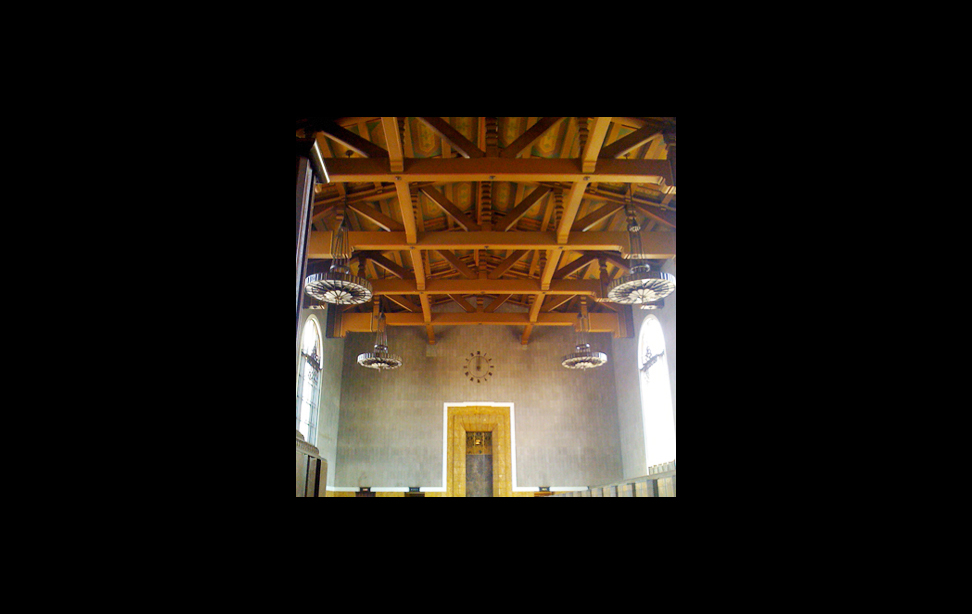 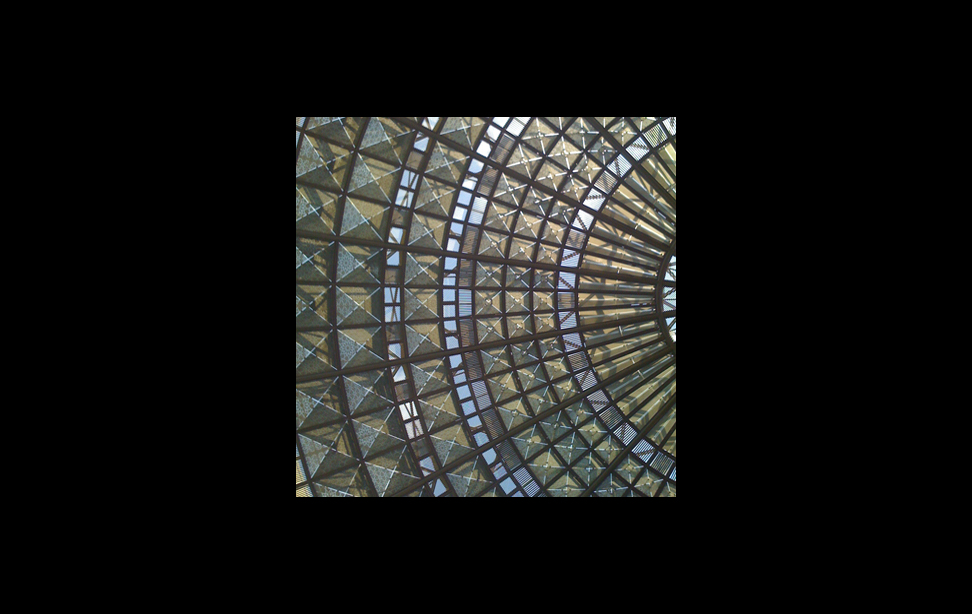 LOS ANGELES, CA -- As you cross the threshold of Los Angeles' Union Station you are immediately awash in early 20th century American passion. Union Station is a cathedral, a place of worship. Its beauty and intricacy declare to future generations our pride and desire to embellish our greatest social achievements with the adornments of kings.

Los Angeles' Union Station rose from the demolished ruins of Chinatown in 1939. The Los Angeles Times hoped that the new consolidation of freight and passenger railways would “forever do away with Chinatown and its environs.” To the city's credit, the Times was completely unsatisfied in its desire to see Chinatown disappear. Los Angeles voters chose to build Union Station (rather than a system of elevated railways). It was a massive endeavor that would become the "Last of the Great Railway Stations" and live on to delight visually and structurally.

Though it is padlocked these days, the former ticket counter rests imperiously in an immense hall (as seen in Photo 1). The counter’s intricately carved ashen wood swims atop an angled and articulate combination of Mission-style warm brown tiles—a pathway that extends the length of the hall, which is composed of inlaid art-deco marble patterns. With the exception of the occasional wedding or city function, it sits in foreboding silence. A century's worth of human experience unfolds while standing in front of this massive chasm. The hustle and bustle of times past, when the rails were superior to even the automobile, floods the great hall. The stern, eternal, wood beams hold the ornate ceiling in the sky while extraordinary Art Deco chandeliers hang like iron raindrops from the eves (as seen in Photo 2). Between these beams and chandeliers, the roof is composed of painted red and green designs which exhibit an almost Inuit styling, while keeping in the art-deco practice of strong and defined shapes.

The main waiting room of Union Station is similarly immense; however, to this day, it is congested with those coming and going, new in town or born and bred. Union Station is still a Los Angeles crossroads. The metro Red and Gold subway lines, AMTRAK, and Metro Link all meet at the station, as well as mail trains for the Los Angeles Terminal Annex, which was the primary mail processing facility in Los Angeles until 1989. Passengers from across the country, foreign destinations, and every neighborhood of Los Angeles converge daily within this hall, peppered with large, plushly cushioned leather chairs, to discuss business, politics, philosophy, art, and the more idle affairs of human existence. Windows, from ceiling to floor, pour light into this lobby and flood it with color.

Further into the structure, the beautiful facade disintegrates into utility. Walkways and tunnels to the various arriving and departing rails branch like tentacles from the long common walkway. With eyes cast down (or alive with the occasional spark of recognition), the masses move rhythmically between tunnels, mixing and separating like the elements forming in a supernova. Like the massive underground stations of Manhattan, it was likely beautiful at its inception, but now showcases the patina of heavy commuter use.

Once safely navigated, the railway tunnel widens slowly and finally leaps skyward. The ceiling of the cavernous East Portal is half-devoured by stained glass, set in long, curving beams (as seen in Photo 3). Daylight pours into this skylight and paints its own murals of light against the shining floor. The north wall features "Mural for City of Dreams, River of History" by Richard Wyatt following the curved walls above an immense staircase. The swinging, flowing lines of the portal all wind down, as if in a whirlpool, toward the center and follow the large ornate arrows adorning the floor due east.

The inspired hands and minds that created this Los Angeles landmark have passed along a gift to future visionaries. Days upon days are easily wiled away in this visual and aural wonderland. Whether sketching the architectural prowess of the Parkinsons and van der Linden, mimicking the bouncing light and colors with brush stroke in oil or watercolor, or silently reclining in the lobby’s imperious chairs to craft a dark noir mystery, Union Station shares its beauty with the artist and the art-appreciating layman, alike.