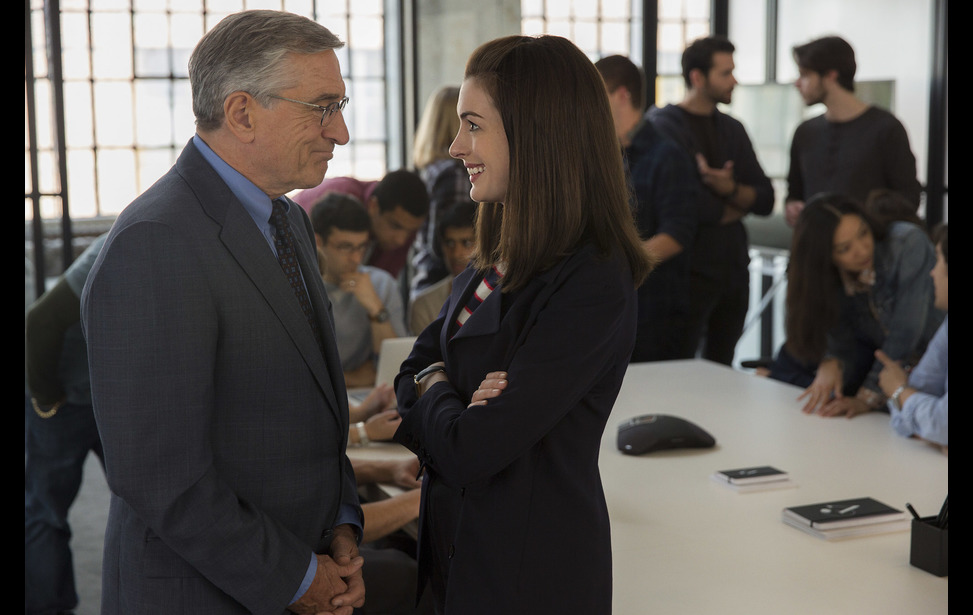 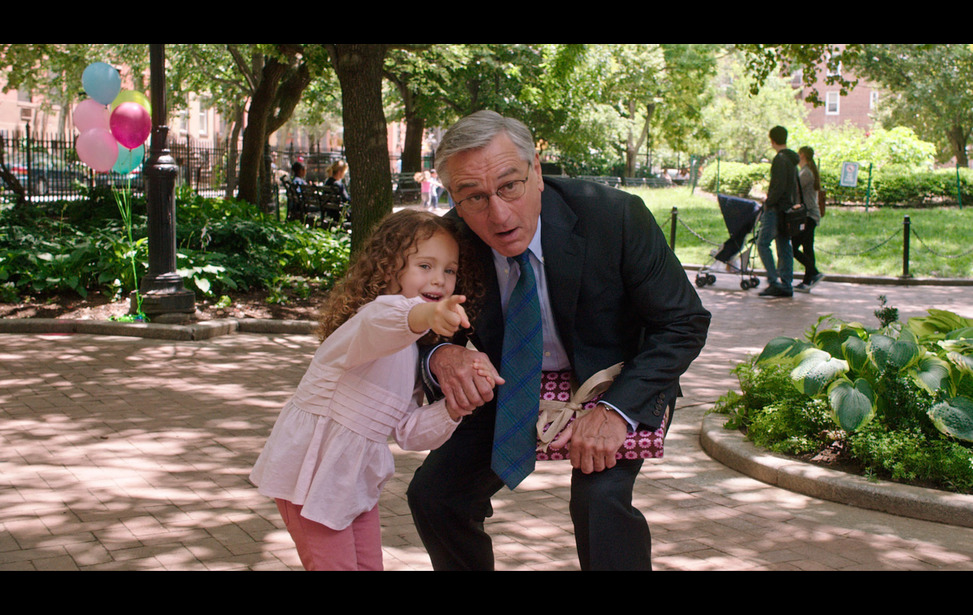 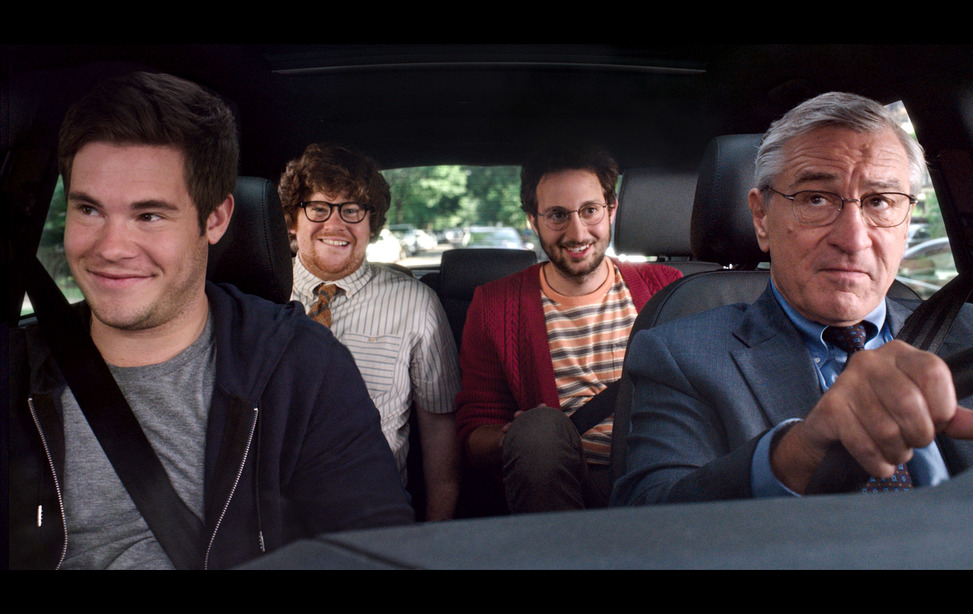 Unlike Nancy Meyers' earlier film, It's Complicated … this one isn't. While The Intern may be friendly and harmless, almost puppy-like, it lacks bite. Don't be surprised if the oldsters are lulled into a happy somnolence … let's just hope they keep the snoring to a low snuffle.

That said, the premise is terrific: A 70-year-old retiree and widower (Robert De Niro's Ben) concludes that without work he no longer feels vital. Not one to pack away his natty business suits, ties and coordinating hankies, Ben applies for an internship at a hip start-up company that's made a name for itself as a preeminent online fashion site. Founder and workaholic Jules (Anne Hathaway) forgot that she signed off on her COO's idea of taking on a few senior interns, and is horrified when Ben appears, groomed to a fare-thee-well, briefcase in hand, ready, willing and eager to do whatever the boss requires. But her dismay soon turns to delight when she sees that Ben -- who'd been a phone book company executive for decades – carries out his job like a consummate professional.

Inexplicably, veteran filmmaker Meyers doesn't deliver on the aforementioned premise. Very little is earned. Ben isn't so much a person as he is a fantastical Fairy Godfather. He handles all challenges big and small with aplomb and tact, appearing at just the right moment to fix this or smooth that. When he inadvertently catches Jules' limo driver taking a nip from the bottle, voila!, he dispatches the fellow in all due haste and takes on the job himself. And of course he knows the best routes through the city; of course he brings his hungry boss the best chicken soup in Brooklyn; of course, he volunteers as a last-minute nanny for Jules' little girl. He's Mrs. Doubtfire in a 3-piece suit, the genie who grants wishes without strings, and the most miraculous AARP-ster who ever applied for Social Security. OK, then, I guess we're finished here. Thanks for coming to the movies, folks ... you know the way out.

We're clued to the screenplay's lapses at the outset when Ben, hailing from the era of pen, paper and portable calculator, effortlessly records and uploads his audition video. Yet when, on the first day at work, a supervisor directs him to his assigned desk, Ben has no idea how to turn on the computer. Monologues are delivered without so much as a stutter, inadvertently bleaching the human element out of the character. And the movie surprisingly turns crass when it goes for the cheap laugh, i.e., when a spurned lady friend (Linda Lavin) gives the finger to Ben during a funeral.

It's not that De Niro isn't charming. You can't help but love this beguiling side of him. But a winning grin can't carry an entire film. Hathaway is fine as the harried, nascent businesswoman who's doing her best to keep herself together as her snowballing success threatens to overwhelm her. However, with the plot turning on whether Jules should acquiesce to investors who want her to hire a more experienced CEO, well, this isn't exactly the stuff of high stakes.

It appears that for fear of having her audience slip into a diabetic coma, Meyers decided to insert a comedic mini-heist in the middle of the story. The scene borders on slapstick as Ben, plus his three twentysomething nerd work pals, have to retrieve a potentially hurtful email. While the scene adds a spark of energy, it's about as ill-fitting as a flirtatious relationship between a man and a woman who are four decades apart.

And there's the, um, wrinkle: While filmmaker Meyers firmly states that "... there are other kinds of relationships other than romantic ones" and that this is "... a story about a bond and friendship," the growing Jules/Ben relationship alludes to an undertow of sexual suggestion. Ben and Jules fly to San Francisco together. Ben and Jules watch TV in her hotel room together. And as they do, they stretch out on a nice big bed together. Though much of the movie doesn't work, here The Intern wholly succeeds in giving us a creeping case of the willies.

The workplace's three muske-nerds are well cast, each one a bit different from the other two. Their clueless Peter Pans, though cliché, provide a fine counter to Ben: they introduce him to modern times, and he coaches them in grooming, attire and how to conduct themselves as men in the company of real live women.

Conversely, the portrayal of Jules' family leaves much to be desired. As Jules' 5-year-old daughter, JoJo Kushner has been directed to deliver a heinous concoction of dimpled adorable sprinkled with sticky sweet in so extreme a fashion that, in comparison, Shirley Temple would be considered suicidal. And chemistry is non-existent between the husband -- played by Anders Holm -- and Hathaway. Though we're supposed to root for this couple, their union emits such a annoying cloud of dull that we'd rather not. Hell, maybe it's time to bring in the Fairy Godfather after all. At least he's got some magic.

Rating on a scale of 5 jobs without benefits: 2.5

Written and Directed by: Nancy Meyers