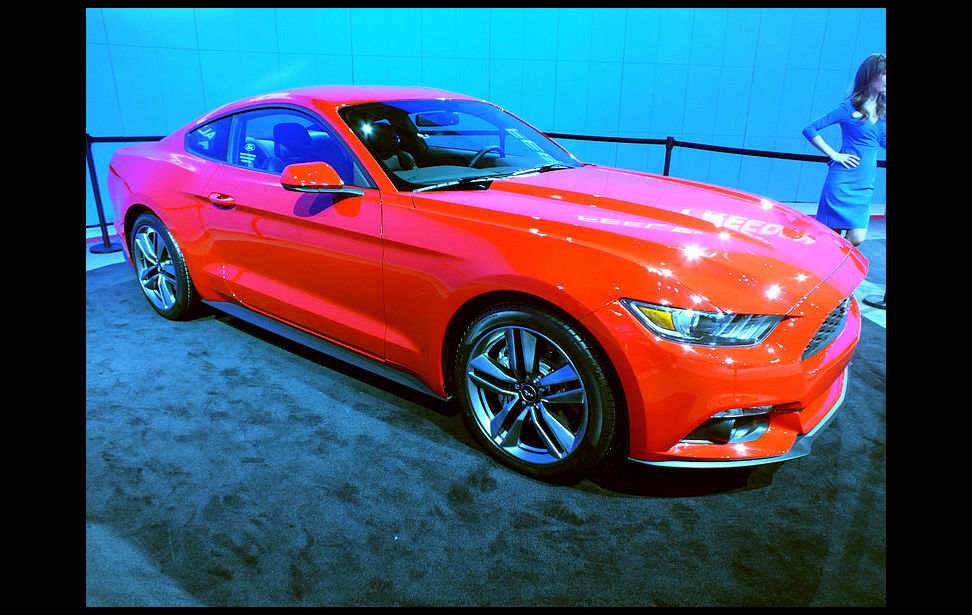 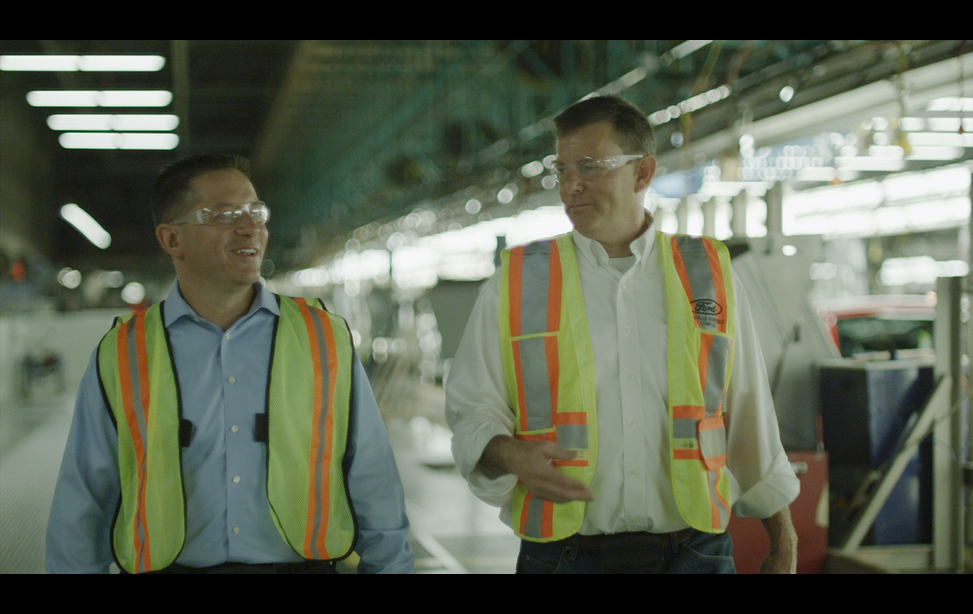 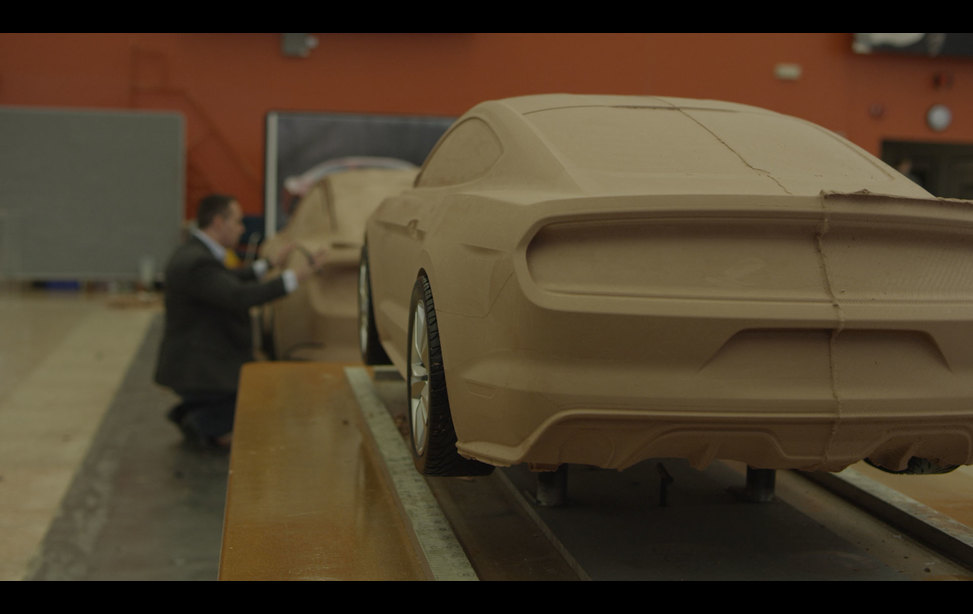 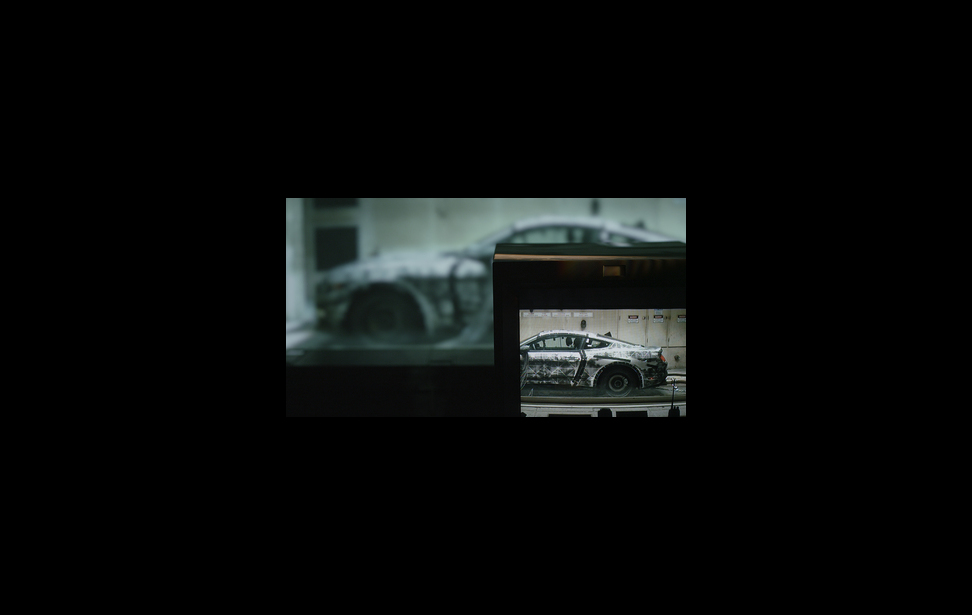 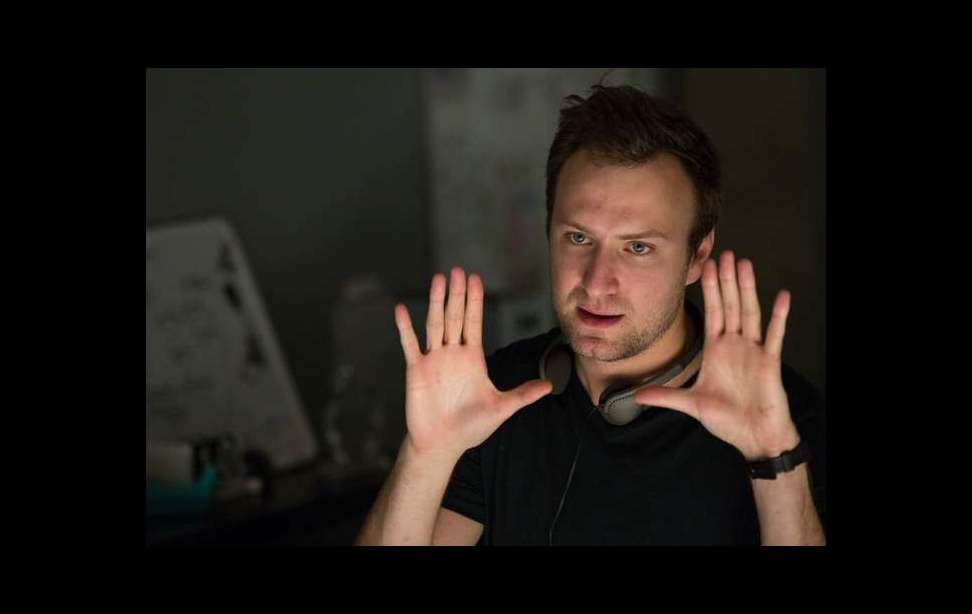 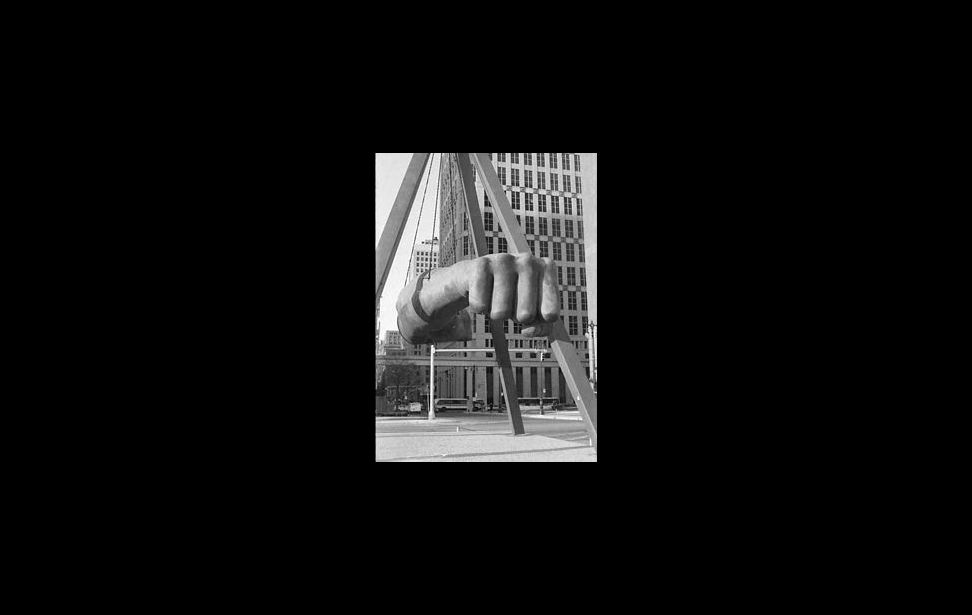 The Ford Mustang has reared up in more than 500 films -- who can forget Steve McQueen's wheels in Bulitt? -- but never has it enjoyed star billing. That's no longer the case thanks to A Faster Horse, David Gelb's portrait of the fabled pony car and how it's bred.

Just as Gelb's previous film Jiro Dreams of Sushi transcended the theme of raw fish, so too Horse covers rich aesthetic, cultural and historical terrain that will enthrall far broader audiences than car geeks. Propelling the film is a challenge: the Mustang is poised to turn 50 and the Ford Motor Company is creating its sixth-generation design to celebrate (as seen in photo 1).

The stakes are astronomical. Having sold more than nine million Mustangs, the Dearborn, Michigan-headquartered automaker is gambling with the job security of thousands on its payroll and with the devotion of 18 fans million worldwide. Well beyond team Mustang, and even beyond Ford, the fate of the top-selling sports coupe and convertible apparently has real implications for the U.S. economy. Gelb aptly places the unfolding project against the sobering backdrop of the late 00's economic slump, including Detroit's bankruptcy filing and the demise of prominent American car manufactuers. Billions of dollars are riding on the Mustang. "So don't screw it up," echoes the message from all corners of the company and beyond.

The onus chiefly falls to Chief Program Engineer Dave Pericak. To achieve the epochal 2015 Mustang due out in Fall 2014, he must come in on time, on budget and on the mark. This includes making and assembling all the puzzle pieces, which is where Engineering Manager Tom Barnes and the Ford Flat Rock Assembly Plant come in (as seen in photos 2 - 4). And that's not all. The process must also be shrouded in top secrecy, given the "fierce competition." As we learn, "It's not about who invents it first; it's about who gets it out first."

Easier said than done, as we grasp over the course of Gelb's five-year shoot from Job 1's 2009 announcement to its unveiling. Time is the big antagonist in this film, which might well have been called A Faster Process. No doubt, time is money. We get our first real taste of the pressure at the one-year mark prior to Job 1's approval, when not one car has been built. A slow pan of a chassis juxtaposed with a fast-motion sequence of workers assembling parts illustrate the point neatly. It's just a model.

When a winter storm delays the delivery of a part, causing a work stoppage, it's as gasp-worthy as any dramatic plot reversal. Some two thousand parts must be designed, built, snapped together and tested, and even a five-cent gasket can gum up the works. Fortunately, Horse gives a sampling of nuts and bolts issues without bogging down.

"This is very much a human story," Gelb told thalo.com at the 2015 Tribeca Film Festival, where the film had its world premiere (as seen in photo 5). "It's about people trying to live up to a dream that they have and the personal stakes they have set for themselves in achieving it." One of the first questions he asked himself in crafting the story came down to, "What is it about cars that gets people so emotional and excited?" His musings informed two bullet points: "That's the money to be lost and that's the job to be put on the line."

A fear of reproducing "the wrong car, the wrong time with the wrong design" has haunted the company since its 1957 rollout of the Edsel, the film compellingly shows.  A trip down memory lane takes us into the decisions leading up to this biggest "flop of all time." In Edsel's traumatic wake, we see, Lee Iacocca would do what he could to dodge Ford's expected kabash of his Mustang concept. An earlier piece of Americana brings us to a touch-and-go chapter in Ford's saga following World War II. The company was so deeply in debt, Henry Ford II narrates in a gravelly audio recording, that he recruited 10 young Air Force officers to salvage its future. The so-called "Whiz Kids" included later Secretary of Defense Robert McNamara and, appearing in the film as a commentator, Arjay Miller, who recalls facing 40 feet of invoices and calculating Ford's debt by the foot. Grainy footage of Ford II's grandfather manages the nifty trick of making us almost nostalgic for the controversial company founder.

Gelb knows how and when to use vintage material, whether for historical background or sheer entertainment. Following the Edsel segment, he goes gung ho with a Bond-style transition morphing a roulette wheel into the steering wheel of a Mustang. "We have sequences of the car throughout its history thundering past the camera in very visceral ways," Gelb said of capturing the Mustang aesthetic of excitement onscreen. "It's a car that's meant to attract attention, so we wanted to make the film a reflection of that bombastic roar." The more than 200-mile-an-hour car is essentially an idea, as the film stresses. "It's basically this feeling of being free and driving fast and feeling this exhilaration," echoed Gelb.

About that rush, talking head Hau Thai-Tang tells of seeing his first Mustang in 1970 in war-ravaged Vietnam. Deployed as part of a promotional campaign to boost American troop morale, the SuperBoss Mustang that riveted his impressionable young eyes stood for strength, power, freedom, open spaces -- everything he admired about America. "My aspirations were to one day own a car," he recalls. Two days before the fall of Saigon in April 1975, Thai-Tang and his family fled for the United States. Today the bespeckled 40-something serves as group vice president of Global Purchasing at Ford. His rise in the ranks included a stint as chief engineer for the fifth-gen Mustang program.

Another immigrant we meet in Gelb's ode to the American Dream is Croatian-born Kemal Curić, who came up with the 2015 exterior design. A fascinating glimpse into what inspired it brings us to Detroit's Monument to Joe Lewis, a huge bronze sculpture of the champion boxer's fist jabbing the air (as seen in photo 6). Over inserts of Curić's evolving sketches, he shows The Fist's "salt of the earth" ethos being contoured into something that will "convey power," a "masculine face" and "fearless eyes."

Some of Horse's most insightful moments probe the alchemy of innovation. Creative tension is key, which is why Pericak welcomes it, in some measure, between the design studio and the engineering team. "If you're not frustrated with the design community, you probably have a boring design," he says.

Whatever else Horse delivers, it will endure as a management primer. Pericak's philosophy, as embracing as a mentor, advocates granting freedom so that people aren't "held out by their own inhibitions." He has an apparent earthiness that draws us into his orbit and makes it clear why his colleagues respond respond similarly. "If you allow them to go out on the edge and hang out a little bit, knowing that no matter what happens you will catch them," he says, "they will go out on the thinnest branch." Pericak goes on to mix his metaphors, but we get the point: "They'll slay dragons all day for you." Given that a typical day can be 14 hours, that's no small thing.

Horse is perhaps at its most revealing when it lets us eavesdrop on design sessions. The tension is palpable as Pericak criticizes a plan to add 70 pounds of weight to the Mustang despite the heavy financial investment in its fuel economy. "It doesn't make sense," he shrugs. This design glitch is but one among hundreds that will surface along the way, but had the conceit served Mustang's defining character as "fast, fun and affordable," it would arguably have outweighed any green considerations. At least that could be the lesson of Ford's 1994 plan to give the Mustang front wheel drive like a European sports sedan, prompting customers to send 100,000 irate letters and stage a fiery protest. Loyalists "changed the product," as footage and on-camera commentary tell us.

A Faster Horse was produced with the cooperation -- and treasure -- of Ford. The multinational company gave the filmmakers access to archival material, some of which is being shown for the first time, and unheard of quarter with the Mustang team. One of the film's earliest utterances notes that few have ever made it through the doors of the featured studio where every Mustang has been designed.

Just how much access the filmmakers got "was something we worked on over time as we built our rapport," Gelb reflected. "The more Dave understood what I was trying to do, the more comfortable he became in opening up the curtains and letting us shoot pretty much anything we wanted." For Gelb that especially meant "being able to film the whole problem-solving process, warts and all." The USC film school alum was pleasantly surprised to have "no creative interference whatsoever" from Ford.

It's hard not to think about Gelb's roots in imaging his attraction to the artistry and ideas on display. As grandson of Arthur, a former Managing Editor of The New York Times, he was nearer than most to the ongoing sweep of events. More significantly, as the son of Metropolitan Opera manager Peter, he was exposed to behind-the-scenes production problems and ingenious design solutions. In our conversation, Gelb affirmed that he drew parallels between Mustang and the Met; in both cases, "they all have to work together and create a whole that's larger than the sum of its parts."

Similarly, he said, "you can't make a film without your teammates," a lesson he first learned with with his earlier films including The King of Central Park, The Lazarus Effect and Chef's Table. Gelb and his crew related in principle to many of the issues looming over Team Mustang. "As filmmakers, we have time constraints and budget constraints, and we too want to make something that reflects our vision and that's true to us," he said.

The film's narrative is modeled to wrest maximal suspense from the design project. At times it strains to replicate the tension of The Cove -- the Hitchcock of documentary thrillers that writer Mark Monroe also helped structure -- or the existential threat of another of his writing credits, Chasing Ice. It's a pardonable overreach, and he does his level best with luxury car making.

Viewers seeking a sharp exposé of the automobile industry needn't take the ride. Like Barbara Kopple's Hot Type: 150 Years of The Nation, about the leftist weekly on the occasion of its historic anniversary, Horse is a self-addressed love letter for the company bankrolling it. But anyone with an interest in the design and manufacturing process and a taste for engrossing stories is urged to saddle up.