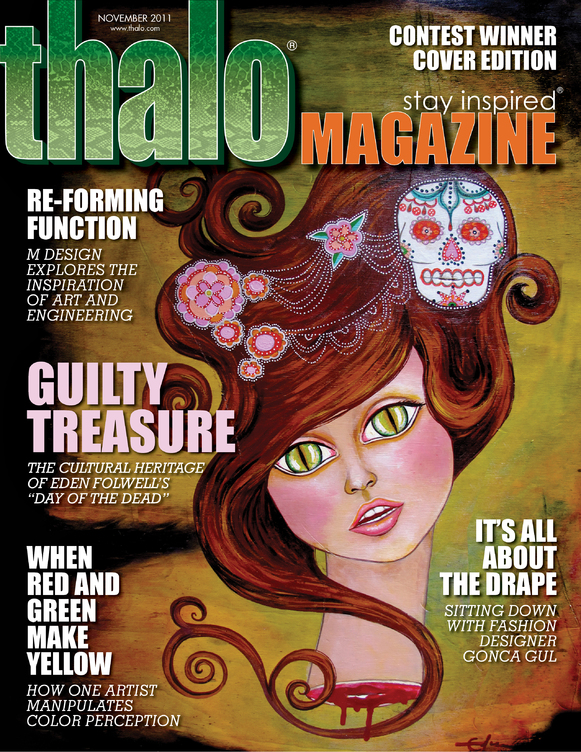 Born in Southern California and raised in Great Britain, the Middle East, and the United States, the influence of Folwell's nomadic childhood can be seen in her unique colorful work.  A self-taught artist, Folwell feels a deep spiritual connection to her artisan ancestors.  The powerful simplicity and richness of her work echoes the Mexican-American and Huichol Indian cultures of her heritage.  Her palette is a feast of typically Mexican colors.  Working primarily in acrylic on canvas or wood, her artwork typifies the bold contemporary aesthetic of popular Chicano art.  Folwell currently lives and paints in Southern California with the exotic diversity of Los Angeles as a constant source of inspiration.

thalo: How long have you been an artist?

Eden Folwell: I was born an artist... always making things, creating, my whole life. I used to think that there was nothing unique about that. When something would happen in the world, a big news event, my reaction was to create something. To paint, collage, or draw it. To show how I felt about it. My mother is also an artist, so I thought that was what everyone did. Writing, painting, sewing, creating. The media didn't really matter; I just felt the need to create. I only realized in my 20s that it was something special and I began to think of the word "artist" as a label I could apply to what I did and what I am.

th: Your piece Remordimiento de Conciencia has a Mexican Day of the Dead feel to it. Do you find inspiration from that cultural event?

EF: Definitely. I was born in California and I'm part Mexican, but I grew up all over. Texas, Scotland, Dubai... following my father who worked in the oil business. So, I never really felt a connection to anything Mexican when I was younger. Then in my teens I found out that part of my heritage is the Huichol Indians and when I started to learn more about them I found out that they are wonderful artists and that the colors and shapes and symbols in their work were very similar to the abstract pieces I was creating at the time... using different media... because they use yarn to paint and I was using acrylics, but the colors and shapes were like echoes. So, I started wondering how much of my "artist" really wasn't a part of me, but was a channel for my genes or ancestors to speak through me. I started to look at a lot of Mexican folk art, too. And I was immediately drawn in a really strong way to the Dia de los Muertos art. The sugar skulls, the amazing altars overflowing with food and flowers, the dancing skull figures... I felt very connected to it. It's the celebration of death, rather than the fear of it that I like to explore and the way that something can appear to be ugly and beautiful at the same time. And I love the use of plywood and paper maiche to make art. In 2007 I started a series of sugar skull paintings on wood and I've been painting "Day of the Dead" pieces ever since.

EF: It is! A few years ago I killed a snake at my daughter's preschool, by cutting off its head and then chopping it into small pieces with garden shears. Shortly afterwards I began to have dreams about this life I had taken. In the dreams, the snake spoke to me and had a human face. I guess in some way this was my conscience talking to me. After several nights not sleeping, I tried to look up the snake online and found out that the creature I had killed may not have been a snake at all. It's possible that instead of killing a dangerous animal, I had really killed a legless lizard which is harmless. So of course, the painting is a bit of an apology.

th: Do you find that your pieces evolve as you work, or do you have a specific style and look in mind at the start?

EF: The most thrilling and terrifying thing in the world is a blank canvas. I often have an idea of what I want to do, but pieces certainly evolve as I create. And not every piece is a success, so I'm not afraid to paint over something that hasn't quite worked. I gesso over it... and often the pieces that are created with something else underneath are my favorite works. Because the texture of the canvas is completely altered by what is already there.

th: What is the biggest challenge in being an artist today?

EF: I try not to think about it. Of course, commercially the challenge is that in our current economic downturn, art is a luxury item and the market is considerably smaller than it was pre-2008. But artistically the challenge is always the same... to put yourself on the canvas. I challenge myself to be more and more open with each painting. Because the art I love is brilliant because I feel like I can see through the artist's eyes. It seems obvious to say, but seeing a Van Gogh... you see the man. So my goal is to have someone look at my work and see me. To cut through the defenses and walls you put up in every day life... and pull out part of you that you would rather not show. The bad part, the "Guilty Conscience"... because everyone has one.

th: A lot of artists are interested in multiple disciplines. What’s your favorite category to check out on thalo.com?

EF: First I look at articles on fine art and painting. Then, I look at mixed media and I love the inspiration section. I have also watched some of the videos on thaloTV which are fantastic.

How long have you been an artist?