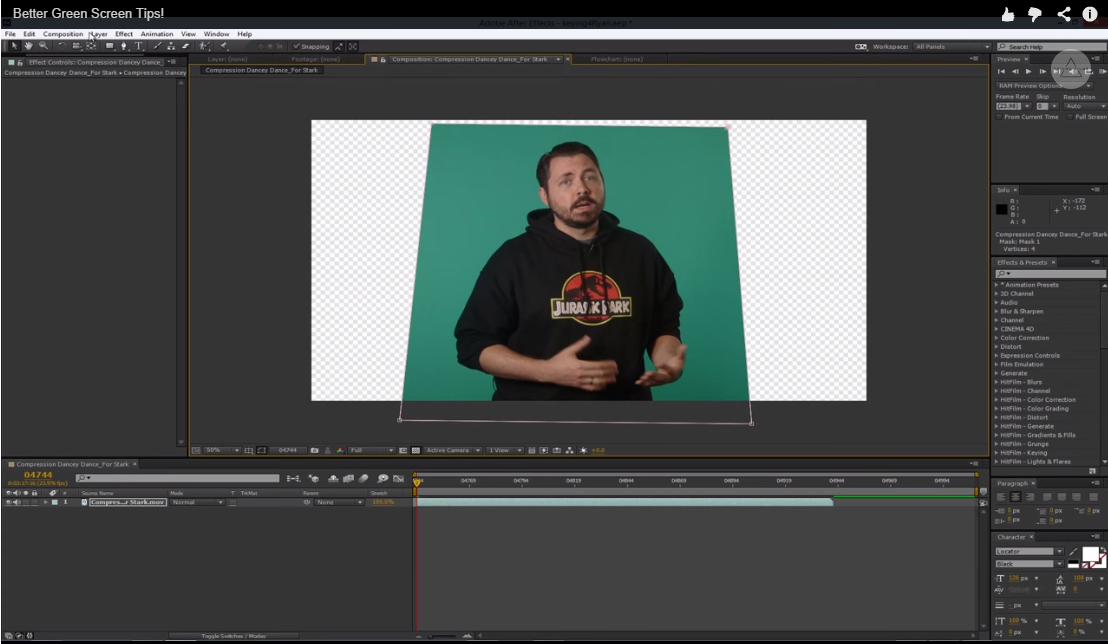 Bad lighting. It’s the bane of any green screen attempt. And it can come from uneven placements, wrinkles in your green screen, or sudden movement of your actors. And don’t get me started over bad encoding that creates that greenish halo effect. Luckily, Ryan Connolly over at Film Riot has authored a primer on how to turn your green screen skills up to eleven.

Since he does all his shows on green screen, Ryan Connolly has mastered the effect and offers a few sage tips on how you can do the same. First off, Connolly says it doesn’t really matter what color you use for your green screen, so long as you’re not wearing a matching color that gives you that floating head look (unless, of course, that’s what you’re going for).

“You can get a descent key from any color,” says Connolly, “as long as it’s contrasting from your foreground and is evenly lit.” But blue or green … either works just fine. “The main reason I use green over blue is that digital cameras are more sensitive to green with how it handles color,” Connolly says. Connolly also says that the majority of noise is largely due to the blue channel, and you’re far less likely to find day-glo green clothing, but blue outfits are very popular and can wreak havoc with your trying to key it.

Once you’ve decided on your screen, Connolly says, you have to stretch it off tightly. Of course, if you paint a wall with green paint, you’ve solve the stretching issue lickety split. But green screen paint isn’t cheap, and you can get a complete kit on Amazon for under $100, with rails. So that’s where I’d go and just stretch that bad boy.

Now you’re ready to ?evenly light it. That means avoiding shadows and hot spots. This is because either will provide with tonality issues that could cause you, as a filmmaker to even go to the extreme of rotoscoping the image in post, or reshooting it. So evenly lighting your green screen is key. Connolly offers this tip when doing so, use your camera’s waveform and zebra stripes to adjust your lighting to get the most even coverage. He uses also uses cooler, LED lights to light up his screen, while he uses tungsten-based, warmer lights on his actors. This gives more even coverage on the screen, without as much issue with hotspots while the actor’s face retains that warm skin tone.

Production is the important part … if it’s not shot properly, no amount of digital trickery is going to get you a good key.

Once you’re ready to shoot, you have to properly set your shutter speed to keep the motion blur nice and tight, but not too choppy. This causes a green smudgy area. So Ryan uses a shutter speed of about 1/70 to 1/80th to make the image a bit more crisp. He also manages ISO to make sure there isn’t a lot of noise. Obviously the higher your ISO, the more noise you invite to the party and noise is the enemy of green screen since it causes keying to be more problematic. So setting a good low ISO prevents that. He keeps the ISO native and doesn’t mess with boosting it at all, and if you’ve lit right, it shouldn’t be an issue there.

After that, make sure your subject is a good distance away from the green screen so that there isn’t any “green spill” reflecting on your subject. Too close and they’ll have a green hue. Once you get your image and then take it into your post production suite to key it all out except your subject. From here, you just have to decided which key program you’re going to go with. But chances are, you have all you need in Final Cut Pro X or Adobe Premiere to do a simple key, or?After Effects (plugins like Red Giant’s Primatte or Adobe’s Key Light work great) for something more complex. Then you have to mask out your subject adjust your settings to get all the background keyed out (the black area) and set your editor to ignore that so your white siloutted matte is let through. Toss in the background and you’re ready to color grade. There’s a bit more to it, and Ryan offers it on the video below. Give Film Riot a follow. You’ll learn a ton.