The NFL Could Change Television As We Know It 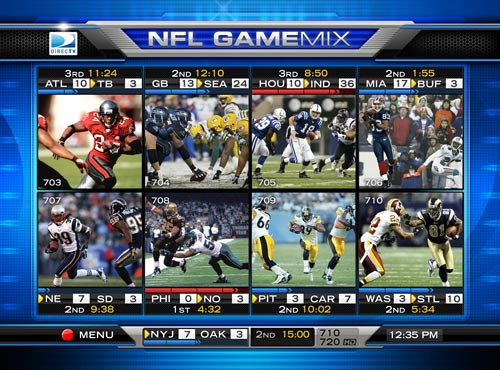 With a few of the NFL’s broadcast contracts coming up for renewal, competing bids this year have started to emerge from a new player in the game … the Internet, as online companies like Microsoft, Google, and even Apple have made moves to offer competiting bids for broadcast of games via streaming video. We’ve seen this coming for awhile now, as the NFL has begun dabbling in streaming of game content through pre-season and playoff games, and of course, the Super Bowl.

But the entire season has remained somewhat elusive (unless you count pirates who put DirecTV feeds on uStream). And with the NFL’s goal to generate $25 billion in annual revenue by 2027, will it be too long before we see games streamed directly to users, in addition to network and NFL prime ticket games? You can bet it’s going to come sooner or later. And if it does, it could change the TV landscape forever.

“It’s almost like the networks are afraid to say no to the NFL,” says one senior TV executive to the Wall Street Journal

With the first ?game of the season in the books last night (which Seattle laid the hammer down rather handedly onto Green Bay), ratings for the Kickoff opener saw over 27 million viewers, pulling in a 15.5 rating and a 26 share. That makes it the third highest rated kickoff game in NFL history, but it was also down slightly from a year ago. Still, it shows that the NFL is alive and well on television.

But when cable cutters looking for ways around having to pay $350 for Sunday Ticket, streaming has become a very attractive option. NBC Sports live streams the game through NBCSports Live Extra. But in the past you had to be a Verizon customer to get past the gatekeepers. And even other streaming options like ESPN, Fox or CBS also required a cable subscription for the convenience. So viewers were still forced to keep that cable or satellite subscription like a ball and chain around their ankles.

And with that kind of hard core interest, comes an opportunity for the NFL to achieve their goals and use the threat of a streaming option to hold up broadcast rights at a premium. And according to the Wall Street Journal, CBS won the right to broadcast eight Thursday Night Football games this season, with a one year contract worth nearly $300 million. And that’s just for Thursday night, and doesn’t count for the nearly $1 billion for Sunday regional games through 2021.

NBC still has a choke hold on Sunday Night Football thanks to their deal back in 2011, which was a nine year contract (after losing NFL for years). So they’re good until 2020. And ESPN has a $15 billion agreement to show Monday Night Football through 2021. And DirecTV’s $4 billion NFL Sunday Ticket agreement will be up for renewal at the end of this season, leaving many to believe the cost to re-up will be a steep one.

So can Apple and Google come in and make the competition fierce? Sure they can. Apple has nearly $150 Billion in the bank and more coming with the new iPhone 6 debuting soon. And Google is always in play. But Apple could have the advantage since they have far more streaming options through Apple TV, even though Google’s Chromecast is only $35. But Google hasn’t really freed it up to developers as fast as they’d like, and so Apple is still in the number on position.

And then there’s Roku, who while they may not have money in the bank for a serious bid, is emerging as a serious streaming player. And then there’s Microsoft and their XBox Live, which offers live streaming through the XBox One, and even Amazon?which could offer it through Amazon Prime just to boost memberships – though there’s isn’t much sign they’ve shown any interest yet. And these options are very attractive to the NFL because of their innovative attitude. While television is very lucrative for the NFL, it’s still using the same basic business model since the 1950′s. While streaming video is blazing new trails. And it offers what Jonathan Kraft, the owner of the New England Patriots, calls “premium value to our content.”

But the NFL is still wading into the shallow end of the pool, offering original content such as NFL Films?documentaries, TV shows and other content through their NFL Now online video service. And they also have a deal with Twitter to show video clip highlights through Vine. And the NFL still has their $1 billion exclusive streaming deal with Verizon. But an online version of NFL Sunday Ticket is coming, and when it does, subscribers will be able to get every game for an estimated $200 a season through DirecTV without a companion subscription. But all this is piecemeal as the NFL takes a shotgun approach.

But if they ever decide to go all in on streaming video, broadcast TV could be in serious trouble and could finally be faced with the notion of evolving or dying. And that’s usually when they get litigious.

The post The NFL Could Change Television As We Know It appeared first on Doddle.