Doctor Who Review - Into The Dalek 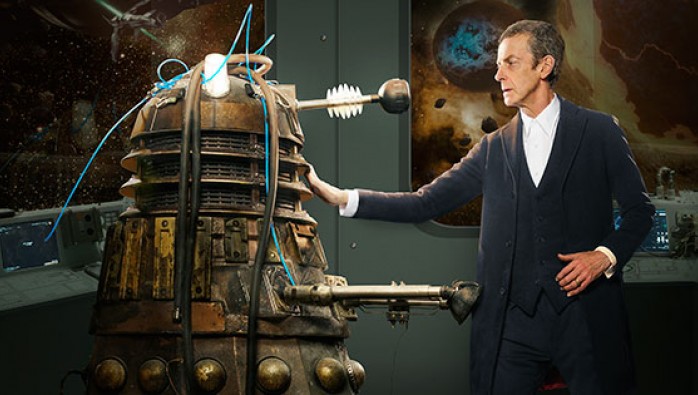 It’s week two of?Season 8?of Doctor Who,?and we find?Into the Dalek … the Doctor getting caught up in a skirmish against a human rebel fleet and the Dalek’s! Yep, our favorite annoying villains are back and the Doctor has to … wait … help one? Yes, that’s right. The human rebels, who are hidden in an asteroid field, have captured one and it’s in need of a Doctor. Fortunately, #12 is there. But not before he brings Clara a coffee … and in true Who fashion, he’s three weeks late. And remember … SPOILERS.

The episode picks up after the fan-made credits (and yes, I can’t believe using them, it’s so cool) with Clara back at Cole Hill Academy teaching, and she’s introduced to a new teacher, who’s fresh from service in Afghanistan. Danny Pink?(played by Samuel Anderson). And it’s clear from the beginning that his tour of duty has left him scarred, but he’s trying to move on and acclimate himself into the real world. And he’s doing a good job. But when he meets Clara, he’s flummoxed by his attraction to her, and her to him. And it’s a charming, yet clumsy effort on his part of ask her out, and utterly fail at it. ?It’s also laying some ground work for his own tour of duty in the TARDIS as a third whee … er … companion.

The Doctor arrives and Clara is none too pleased that he’s three weeks late. But she’s obviously used to it, and while she’s managed to secure a coffee with Danny Pink, she’s off on another adventure in the TARDIS as they head back to the meteor field to make a house call on a Dalek. And to treat his patient, the Doctor takes a page from a classic SciFi movie from the 60s “Fantastic Voyage,” as he, Clara, and a group of Rebel soldiers are shrunken down so they can enter the exoskeleton cage of the Dalek to find out what’s wrong with him and why he’s asked the Doctor for help.

Welcome to the most dangerous place in the universe.

Coming face to face with a Dalek is dangerous, but it’s even worse when you’re crawling around it’s busty innards – which the Doctor shows as being engineered to fuel a Daleks’ fires of hatred and turn it up to eleven. And one soldier discovers just how dangerous it is when metallic antibodies show up and dissolve him utterly. ?But what’s notable here is that the Doctor knew it was going to happen and merely says “he was dead already.” And this is really the first introduction we have to this new, darker Doctor who makes a difficult choice to sacrifice someone to save the others. And it’s disturbing, but we really don’t have time to contemplate it since they’re running away from the Dalek’s antibodies.

Meanwhile, the Doctor has named his patient, calling him “Rusty.” And what we discover is that Rusty was left floating in space and he saw the birth of a star. This event caused him to contemplate who it is … a being driven by hate, destroying all that is beautiful. And it causes the Dalek to reflect, and to begin to change his view point, which is something that the Doctor finds amazing. Then he reaches the part of the Dalek’s that is malfunctioning, and it’s a crack in his internal reactor, which is emitting radiation and causing it to die. The Doctor uses his sonic screwdriver to seal the breach, but it has an unexpected side effect of removing these new empathetic feelings, and the Dalek begins to kill Rebel soldiers on the outside. The Doctor realizes he’s been set up. But he believes that if they can recreate the experience the Dalek had, just maybe they can restore these new feelings.

If I can turn one Dalek, I can turn them all. I can change the future.?I will show it something that will change it’s mind forever!

With the Dalek fleet discovering the hidden rebel ship in the asteroid field, they attack to rescue their fellow Dalek. Running out of time, the team splits up, with Clara and a soldier heading to the memory core, while the Doctor heads to the central core to come face to face with Rusty. And another soldier is lost when she sacrifices herself to hold off the anti bodies while the rest get away. Clara manages to crawl into the memory to find and reactivate that memory. And here is where we are again reintroduced to the mystery that is Missy in heaven, as the soldier is retrieved and is served tea by Missy in heaven. What is she up to? Is this heaven? And what are her plans for those she’s apparently “saved?” I’m sure we’ll find out as the season progresses.

'I see into your soul Doctor. I see beauty, divinity, hatred'

Meanwhile, the Doctor crawls into the central core until is literally eyeball to eyeball with the Dalek. And when he manages to merge with it mentally. And in that moment, the Dalek not only sees the beauty of the universe, but also the hatred that the Doctor has for the Daleks, something he’s buried down deep. And it’s that hatred that the Rusty gloms onto, changing his hatred for humanity to hatred for his own race. And it’s a telling moment.

At the end, Rusty manages to convince the fleet that the ship is going to self destruct and they retreat. He then must return to his people, changed forever. And not in a way that the Doctor wanted. For now Rusty hates his own kind with the fury of a Dalek. What will that bring? With the mission somewhat accomplished, the Doctor brings Clara back home, just in time for her date with Danny. And that’s where we leave it.

All in all, Into the Dalek is a solid episode. It’s a bit dark, and there’s some humor, but there’s also something that may lend credence to the rumor that Jenna Coleman is leaving. Peter Capaldi does a great job as the Doctor, and he’s growing on me with every episode. But?there seems to be something a bit off between the Doctor and Clara.?More than just the stress of adjusting to his new look and personality. The dynamic is different (she slaps him a lot), and I’m left to wonder if it can survive. Could this be why Coleman is rumored to being shown the door? I hope I’m wrong. We’ll see as the season progresses.

The post Doctor Who Review – Into The Dalek appeared first on Doddle.