Gareth Edwards directed one of my favorite movies this year, the reboot of Godzilla, and is heading out to helm an as-yet-unnamed Star Wars spin-off film. He does, however, come from the humble origins of his indie first film Monsters, that was made for less than half a million dollars.

While Edwards has gone on to bigger things, his first film is still getting the sequel treatment as Monsters: Dark Continent. This time it’s being directed by Tom Green (TV series Misfits and Blackout), and the first full length trailer has bowed in and you can check it out:

The film is not a direct sequel to the original but rather follows chronologically in the same universe. Some of the visual language of the original film is brought onto the sequel, but also vastly different due to its Middle Eastern setting. I get a very District 9 meets Black Hawk Down meets Pitch Black, set in the Monsters universe, kind of feel from it.

If those three movies mashed into Monsters doesn’t get you excited, I don’t know what will. A few stills from the film have also been released which you can check out in the gallery below. 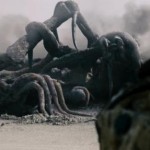 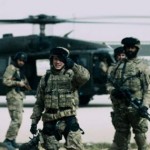 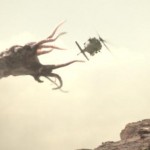 The one thing that really gets me down, is that there is yet to be an official North American release date. Until such time, however, those of you across the pond in the United Kingdom will get to see it when it premieres November 28, 2014. It may come out on VOD here in North America, much like the first?Monsters did in 2010.

Here’s a synopsis for the film from the studio:

Seven years on from the events of Monsters, and the 'Infected Zones' have spread worldwide. Humans have been knocked off the top of the food chain, with disparate communities struggling for survival. American soldiers are being sent abroad to protect US interests from the Monsters, but the war is far from being won. Noah, a haunted soldier with several tours under his belt, is sent on a mission: an American soldier has gone rogue deep in the Infected Zone, and Noah must reach him and take him out. But when Noah's unit and transport are destroyed, he finds himself with only a young and inexperienced cadet for company -- the brother of the man Noah has been sent to kill. The two soldiers must go on a life-altering journey through the dark heart of monster territory, accompanied by a young local woman to guide them. By the time the three of them reach their goal, they will have been forced to confront the fear that the true monsters on the planet may not be alien after all.