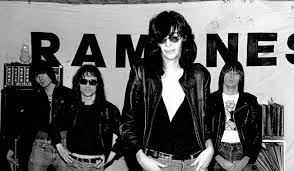 According to Billboard, the Goodfellas filmmaker is aiming for a 2016 release which means he plans to shoot the movie next year.

There is no other information about the proposed Ramones biopic – although New York native Scorsese and the Big Apple punk pioneers do seem like a great fit.

Firstly, the Casino director is a big music fan and has directed documentaries and concert films centering on The Band, The Rolling Stones, and George Harrison.

Also the 71-year-old has developed a niche in chronicling troubled true stories, most recently helming The Wolf Of Wall Street, which grossed nearly $400 million worldwide.

And the story of the Ramones is eventful to say the least.

Formed in 1974, the band had a tumultous career, which included 8 official members, before splitting in 1996. Despite being hugely respected, the group never fully realized their commercial potential.

The film will coincide with the 40th anniversary of the band's debut album, and first single Blitzkrieg Bop. In July this year, the last living member, Tommy Ramone, passed away.

Billboard also confirm that the project is in early development and does not have a writer attached.

Scorsese’s next project, Silence, starring Andrew Garfield and Liam Neeson, is currently sheduled to land in theatres in November 2015.