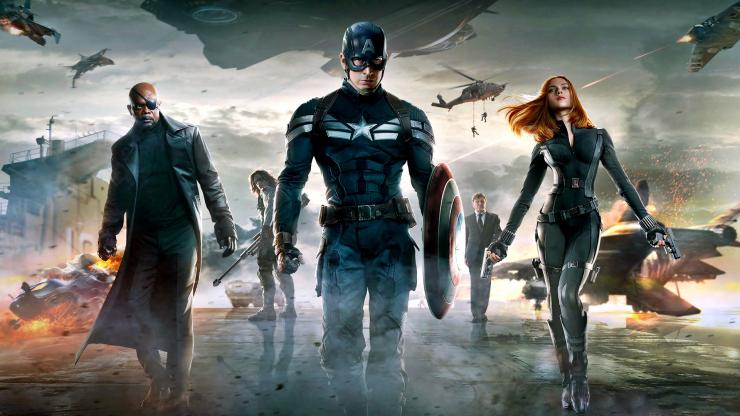 Avengers: Age of Ultron is still just under a year away, and Ant-Man only recently went into production, and yet we’re starting to hear news of Marvel’s first 2016 property, Captain America 3. More than that Anthony and Joe Russo, who are returning to the director’s chair have indicated that the next film will wrap-up the lingering plot threads, and commented on whether this is the end.

It is a hard question to answer because it gets to the specific of where the narratives are going. I will say this: yes, for satisfying storytelling, you want a beginning, middle, and end. That's the natural arc that we all thrive off of in narrative.

The great thing about the Marvel universe, just like the publishing, it's a very vast, inter-connected universe, where characters will have their rise and fall, so to speak, and hand off to other characters. As the cinematic universe moves forward, you may start to see the cinematic universe adopt that same pattern, as the publishing has, where there's closure with some characters and new beginnings with other characters. How those hand-offs are made is always part of the fun. – Speaking with both Collider and Movies.com

In the comics, Bucky Barnes (aka, the Winter Soldier) took on the mantle of Captain America after Steve Rogers was supposedly assassinated (see: Civil War). Many have suspected that Sebastian Stan would eventually end up being Captain America, because he has a nine picture deal with Marvel.

Meanwhile Chris Evans (Steve Rogers) will only have one more film left on his contract, The Avengers 3, after he stars in Captain America 3. So far, Stan has only been the two Captain America films, meaning if he’s featured in Captain America 3, which is a certainty, he’ll still have six movies left in his contract. (Or we could get actual Winter Soldier films.) Chris Evans has expressed a desire to move into directing (via Variety), but Marvel could offer him a juicy new contract to return, even if Bucky becomes Cap in the short-term.

As for who else is in the next film, we know that Anthony Mackie is returning as Falcon (who, by the way, will become the next Captain America in the comics – could he also take up the Shield in Cap 3), but the Russos did tantalize us:

We just got another incredible draft from the writers, and are very excited about the film. I can’t divulge who is going to be in the film, but I think the fans are going to freak out when they hear about it.

There were rumors that Hawkeye would be in the next film, with Jeremy Renner telling Collider that:

There are rumblings of Captain America 3. I don’t know what’s going to happen there. I’ve got to find the time, man (laughs). I’m trying to stay home and I can’t.

Before you take it as gospel that Renner will be in the next film, Joe Russo stated that Hawkeye was in certain drafts of The Winter Soldier.

What will the next film be about? The Russos are pretty mum on that, but what happens between Cap and Bucky will definitely be a huge part of the next film:

The relationship between Cap and the Winter Soldier was never resolved at the end of the last movie. Thinking about where that relationship can go is a piece of the puzzle for us, for sure. That character is a wonderfully, beautifully tragic figure in the sense of, is he the world's most feared assassin, or is he the world's longest serving POW? Is he innocent by reason of insanity, or the equivalent of it, because he's been mind controlled, or is he irredeemable? Is he ever going to be acceptable to Cap again, as the friend that he used to be before he was the Winter Soldier? These are very philosophical, emotional questions that pique our interest and definitely form one layer of the next movie.

And when we can expect any news on the film:

It will be soon. Look, sometimes the announcement waits on certain business deals to be completed so we're just kind of waiting on the business end of the issue to sort of settle itself and we'll be ready to announce it. But we're hoping in a month or so at the most.