NFL Films Goes All In With The ARRI AMIRA 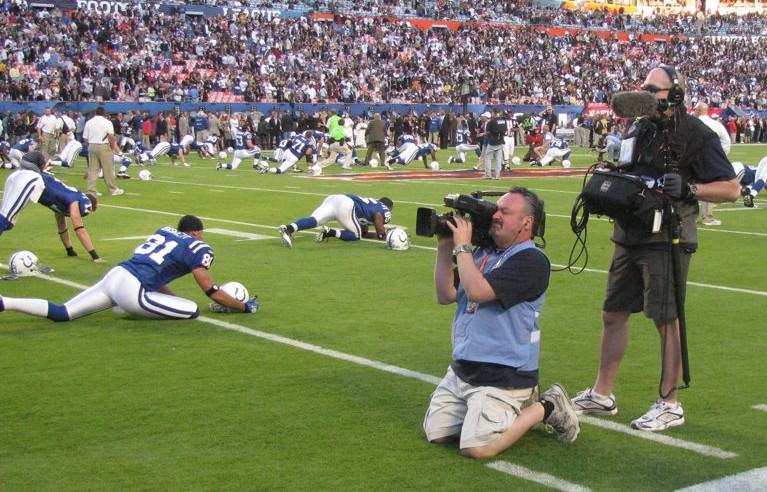 Well, NFL Films is now just a name. Because starting with the 2014 season, the company founded by Ed Sabol to chronicle the great American sport on 16mm film will be shooting exclusively with ARRI AMIRA digital cinema cameras. Does this amount to a huge boost of confidence in ARRI’s documentary camera, and a serious blow to film’s struggling resurgence?

"We wanted our cameramen to have the same comfort they've had with film cameras all these years," Howard Katz, the chief operating officer of NFL Films

Ed Sabol started NFL Films 50 years ago, when 16mm was the state-of-the-art for documentaries. And NFL Films really blazed the trail in telling epic stories on a week to week basis in a documentary style. Coupled with the deep-voiced, dramatic style of announcer John Facenda, the films made dramatic games even more so, and turned mistakes on the field during games into a cinematic comedy of errors.

And they quickly became a staple in the NFL and were featured prominently on television broadcasts. So much so that NFL Films has essentially become the official chronicle for the sport. And with millions of feet of 16mm films over 50 seasons, NFL Films is coming into the twenty first century by joining the digital revolution.

Ed Sabol’s son Steve took over after he retired, and with digital looming, NFL Films began testing new cameras by using them for sideline closeups which could be interspersed with telecined 16mm shots. The goal was find the ideal digital cinema camera that could replace film and still maintain the signature documentary look and style that NFL Films is famous for.

The testing has been going on for years, as NFL Films used cameras from Sony, Panasonic, and ARRI. Most worked fine for interviews and closeups, but when you got to the action oriented footage from the field, issues like rolling shutter and digital flutter at high frame rates reared their ugly heads.

"The notion of feeding our shows faster would please Steve," said Katz, who added, "It's been an enormous engineering challenge for our people to create an infrastructure to do this in so short a time and a significant operating expense for the bandwidth we needed."

Though Steve Sabol died in 2912 before a replacement could be found, he did take a liking to the ARRI Alexa. “He was impressed with how far the technology had come," Katz said. "He got comfortable with his."

While the Alexa provided a technical NFL Films was looking for, it was still a bit ungainly for the movement oriented coverage that shooting a fast NFL game would require. NFL Films eventually found the camera they were looking for with the Amira. And they’ve bought 30 of them to use exclusively for the 2014 NFL Season.

The Amira sports specs that make it ideal for NFLFilms use – a Super 35mm widescreen sensor (the same as the Alexa) and can shoot 2K and 1080p in ProRes codecs, and do so in a more compact package. With the ability to now send footage though internet transmission, the digital conversion will allow NFL Films to streamline their operation and save millions. They will beam footage from CFast 2 cards at the end of every quarter to their headquarters in Mount Laurel, NJ, for editing to over 60 shows that cover the NFL.

But what will NFL Films do with the remaining 16mm film that they have yet to shoot? The plan is to use it for their series NFL Films Presents, a show that will air on Fox Sports. And once it’s gone, NFL Films will merely be a symbolic title on the wall. And Katz believes that Steve Sabol wouldn’t have it any other way.

The post NFL Films Goes All In With The ARRI AMIRA appeared first on Doddle.