Doomed! Watch a Sneak Peek of the Documentary About Roger Corman's Fantastic Four 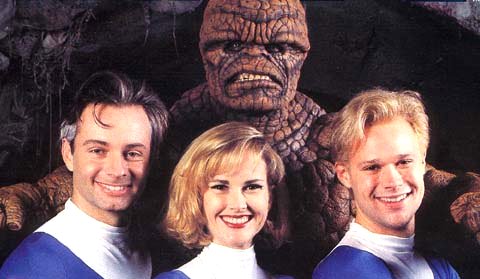 The king of B-movies and mentor to many of Hollywood’s finest directors was once tapped to produce a Marvel film back in the early 90′s about the Fantastic Four. The thing is, the film was produced as cheaply as possible so that the studio that originally optioned the film could hold on to the rights. The film was never released and there has been some speculation that it was never supposed to see the light of day.

It’s that unreleased movie that is the subject of the upcoming documentary Doomed! The Untold Story of Roger Corman’s Fantastic Four. A three minute clip has been released which you can watch below:

Back in the late 90′s when bootlegged VHS tapes were, if not allowed then at least tolerated, on the merchandise floor of comic conventions, I was able to get my hands on a copy of this film. It was campy and low budget as hell, but it was also a Fantastic Four movie. Granted my copy was pretty degraded from being a copy of a copy, but I got a chance to see a movie that had never been released. Our own Web Content Manager and Editor Heath McKnight bought a bad bootleg (complete with a color photocopy cover) of the German-made Captain America, back in 1992, featuring an Italian Red Skull! It’s now available to buy, and it’s a stinker!

But more entertaining than a film like this is the story behind the story. There’s a few documentaries like this in the works including The Death of Superman Lives: What Happened? and Jodorowsky's Dune, or one of my all time favorite docs on filmmaking gone wrong,?Lost in La Mancha. The difference with Fantastic Four and the rest of those films is that Fantastic Four actually got made. It’s sitting on a shelf somewhere just collecting dust and all the hard work the artists, actors and trades people has never been released to the general public. It looks like another fascinating look at the behind the scenes story of a Hollywood production and should be available later this year. Here’s the press release for the film:

In 1994, Roger Corman was tapped to produce this Marvel superhero story on a very small film budget. The film was ultimately shelved prior to distribution, but a VHS copy was mysteriously leaked and the movie became a darling of film bootleggers and, more recently, web pirates. Rumors and speculation surrounding the production have become as much a part of the lore as the film itself.

This year marks the 20th anniversary of Roger Corman's edition of THE FANTASTIC FOUR and finally, all of the secrets, stories and legal shenanigans that have kept this a 'lost' film will be revealed through in-depth, investigative interviews with the cast and crew.

The documentary is directed by east coast Film Studies professor and independent filmmaker, Marty Langford and executive produced by LA-based casting director, Mark Sikes. Sikes was the casting assistant on the 1994 Concorde-New Horizons / Neue Constantin co-production, and was on site at Corman's studio, offices and locations during the 28 day production.

The post Doomed! Watch a Sneak Peek of the Documentary About Roger Corman’s Fantastic Four appeared first on Doddle.