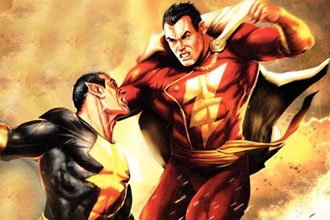 I know, I know, the news is that Dwayne Johnson will be playing either Shazam or villain Black Adam (it’s up to The Rock”, but I think the idea of Johnson playing Black Adam is far less likely than him playing Shazam. Let’s get to the news bits first and I’ll take it from there.

Johnson was reported to say the following to the Associated Press in Mexico. The quote is via Google Translate from Spanish to English so something could have gotten lost in translation:

It's the interpretation of a character from DC Comics. It's the story of Shazam, but I can't say if (my role) is Shazam or Black Adam. In this particular case, I believe we will do (the part) justice. I'm putting my heart and soul into this role.

That isn’t the only quote from Johnson. He spoke with Brazilian website Omelete (via /Film) and again through the Google Translator to make it English. Here’s what he told them:

My trip to Comic-Con was a surprise, so I called personally to executives at New Line and Warner Bros. to see if they would like to announce Shazam there. Unfortunately, it was not time yet, but the official announcement should happen soon.

I am 100% sure that the movie will happen. [We've been] talking about it since 2008, when I was offered the role first. It was just a matter of finding the right script -- and it finally happened now. We have a writer who understood the story and brought an amazing approach not only to Shazam, but also the power of Adam Black.

I think that’s pretty close to definitive. Again, he doesn’t say that he’s playing Shazam, but in his various interviews he keeps on reiterating that he’ll be playing a superhero. Granted, over the last few years Black Adam has become an anti-hero of sorts, but I still have a hard time believing that DC Entertainment would come up to him to play a villain before they cast the hero. And Shazam needs someone to fight — who better than his long standing nemesis Black Adam?

There’s still no word if he’ll be part of the ever-ballooning cast of Batman v Superman: Dawn of Justice. That film is currently shooting, but there’s been no sighting of Johnson on set. Then again, we still haven’t heard of Jason Momoa on set as Aquaman.

So there you go; sure none of this is definitive, but I’d bet my lunch money on this. The only other option is that Johnson will play both roles — and wouldn’t that be exciting!