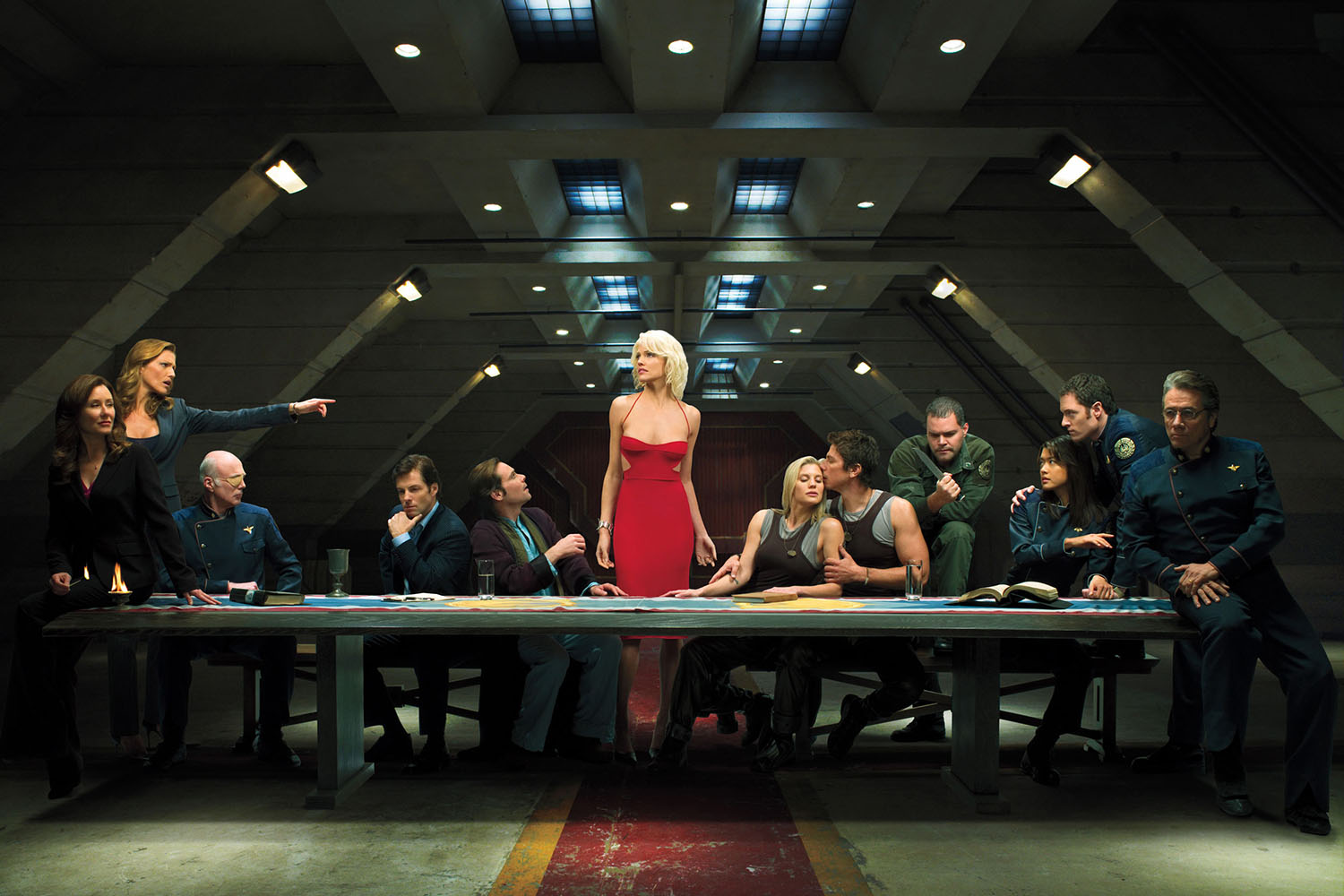 Although he’s admittedly biased, classic Battlestar Galactica star Richard Hatch (the original Apollo, and Tim Zarek for the Ronald D. Moore reboot) says that the SyFy space opera has redefined the genre, and may be the best science fiction TV series ever made. And in a panel today at Comic-Con, he was joined by series writer producer Jane Espensen and consultant Dr. Kevin Grazier to discuss the legacy of the show from the 70s to today and what the future holds for a motion picture reboot.

Hatch said that Hollywood has to learn what the audience wants in this changing landscape, where fans not only keep their favorite shows alive online, but are also getting directly involved by crowdfunding and social media, as evidenced by the recent Veronica Mars movie.

“The audience has a voice,” Hatch said, “and studios are paying attention to the dialog online in trying to redefine where the series goes for here.

Hatch also said the sad fact was that the latest Ron Moore version, while redefining how sci-fi drama is presented, was also caught in an evolution of old school thinking driven by ratings, and new school viewing habits largely dominated by streaming. “The show really needed about 5 more years to get into the underbelly of the mythos,” Hatch added. “And I would’ve loved to have mined more of the characters and their interactions with each other.”

Espensen agreed, adding that the blessing of Battlestar Galactica for her was that there was no moral dilemma in writing scenes for actors, and worrying about if the actor could handle the character’s story arc. “The depth of talent on the bench was so vast,” Espensen said, “that it was like Disneyland, where no matter where you looked, the illusion held up.”

Espensen added that producers Moore and David Eick encouraged collaboration on set and even allowed writers to provide notes to actors when asked. “There was a ton of freedom to improvise on set,” she praised, “and often the best lines in the show were ad-libbed by the actors, but the writers also had the freedom to give actors notes on how to connect with the scene.”

And there was an amount of trust. so that when Hatch struggled with a scene, he felt confident when the director said, ‘Just say the words,’ and rely on the story to sell it. “And it was all too often the best take,” Hatch said. That’s what a collaborative atmosphere buys you in the right conditions.

Turing to the future of the franchise, the question remains to be seen if it will it come back. What would fans like to see? Jane Espenson says that both series benefitted from singular visionaries who had something to say, and the important thing is to let that person run with it, rather than being run by committee. “There’s something very powerful about giving the reins to a visionary who has something to say,” she said. “Ron Moore says it isnt so much necessary to give what the audience wants to see, but to have a story that he wants to tell.”

I agree with this. During BSG, Moore often dragged me kicking in screaming through storylines, but the performances were so good and the stories so compelling, I loved every minute of it. ”

“… it ends up being that the audience enjoys something they didn’t even know they wanted,” Espenson added.

But the SyFy network saw something else, and over-relied on old school Nielsen ratings, and Battlestar Galactica‘s fate was sealed. Hatch said ‘whether its my way or another way, I’m looking for the best way.’

“Galactica has so many more stories to tell,” Hatch concluded with hope. And things have changed. We don’t watch TV the normal ways, and while more people watched Battlestar Galactica, they were watching it on DVDs, on-demand, DVR, and online, so the initial ratings suffered.

“And that’s why the network pulled its support and pressed for the story to end,” Hatch said. “They didn’t see what was really happening.”

Hatch says that future is with Glen Larson executive producing, they’re talking reimagining the original again. But he cautions that while some things are bound to change as a result, it’s important that the core soul of the franchise remains.

Richard Hatch also says that fans are taking a far more active role in their favorite franchises, and that so-called “fan films” have started to become something. “They’re getting more professional, and crowdfunding is showing that fans can step in and create they’re own programming to keep the story alive,” he concluded.