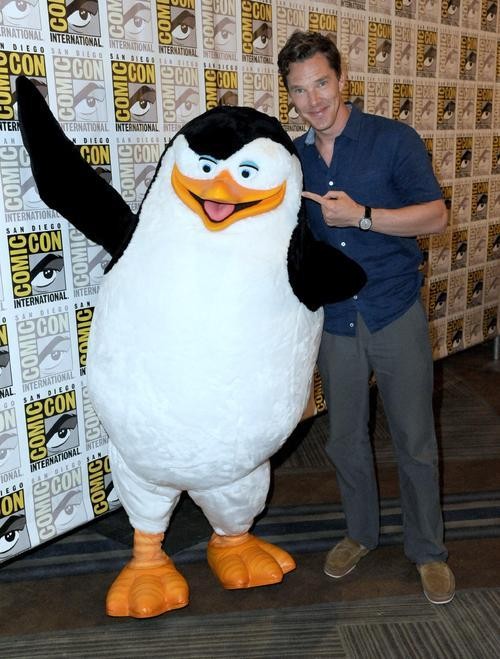 Twitter exploded today when news came from Hall H during the Paramount presentation that Dark Knight and Interstellar director Christopher Nolan crashed the party and gave fans a sneak peak at the new trailer for his science fiction epic. Not to be outdone, ol’ Sherlock himself, Benedict Cumberbatch, who is doing a voice for Penguins, also marveled fans to the point where Yahoo declared him the winner of Comic-Con for Day one.

“The thrill of making a large scale science fiction film has to be about the experience of the audience,” Christopher Nolan said

Paramount had their showcase today and when Interstellar was presented, what fans didn’t know was that both star Matthew McConaughey and director Christopher Nolan were on hand as special surprise guests, to offer an sneak peak of the trailer for his science fiction space opera. And while the film is about a crack engineer/pilot-turned farmer, who has been chosen to take humanity’s first intergalactic journey through a wormhole, he’ll have to do it at the cost of leaving behind his young son and daughter, with the risk of never seeing them again, at least not for many, many years.

“It’s really about human beings, what it is to be human, and who we are in this universe,” Nolan added." The idea that we'd keep exploring space seemed an inevitability."

Nolan went on to add that growing up, science fiction space epics like 2001 and Star Wars had an incredible impact on him, and made him want to tell a story like Interstellar. “grew up in a time when being an astronaut was the highest ambition of any child,” Nolan said. He then went on to say that as a nation, we’ve lost our way and the allure of space travel has wained dramatically over the last 40 years. Little did Nolan know that on the other side of the convention center, the second man to walk on the moon, Buzz Aldrin, was participating in a panel on NASA’s next step.

Personally, I think that’s because we don’t really go anywhere anymore. We just circle the earth in the Space Station, with occasional ferry rides by the Russians to get up there. Sure, we have robotic trips to the Mars, but there’s really something unifying and exciting about seeing an American set foot on another world and plants “Old Glory” for us to beam with pride. And Nolan then said that there is hope that we will once again fall in love with space exploration, as we are on the cusp of technological leaps that will cause us to look outward again and find out what’s out there.

McConaughey added that Nolan is the kind of director who, though inspired by formative films of his time, has little interest in treading over old ground, preferring to tell original and compelling stories. And much like those heady days of the Space Race, McConnaughy said that Nolan is “a man whose reach constantly exceeds his grasp, always out for [the] original”.  And McConnaughy said that’s certainly what Interstellar is all about.

Meanwhile, during the Dreamworks presentation Benedict Cumberbatch set Hall H on fire with his appearance to hype his new voiceover role in Penguins of Madagascar, which Yahoo! best describes as “an all-action James Bond-like wolf who is head of an elite team of animal helpers called the North Winds.”

With a sizzle reel that focused on the Sherlock star’s character, the crowed went absolutely wild in their anticipation of the Dreamworks film and welcomed Cumberbatch to his very first Comic-Con.

“You exist?" Cumberbatch played to the crowd. "You don't get to see this normally. I have never seen this before." Even DreamWorks panel moderator Craig Ferguson played up the crowd mentioning Cumberbatch’s name to the screams of fans.

Did C-Batch win the day? Well that depends on your point of view. But it looks to me like he more of less took over Hall H in the same fashion as fellow Brit Tom Hiddleston did last year in character as Loki during the Thor: The Dark World panel.

The other surprise was Hercules star Dwayne “The Rock” Johnson, rumored for Shazam (or Black Adam) in Batman v Superman: Dawn of Justice, whose notable contribution wasn’t just wowing the fans who came for a sneak peak, but how he did it, walking along the Hall H line, shaking hands and thanking everyone for coming. Class act from The Rock.

And that’s what Hall H is all about ... surprises that no one sees coming. No wonder why fans spend the night to get in.