Feature Film Based On Archer & Armstrong Comic Book In The Works 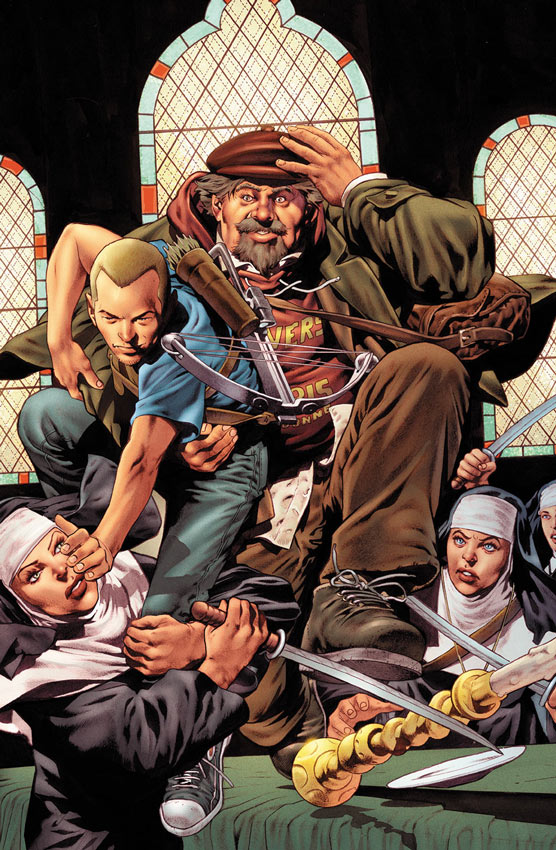 There are reports, from a "very reliable source," that Valiant Entertainment not only ordered a screenplay for a possible movie based on their popular Archer & Armstrong comic book series, but that it’s already been completed.

Ain’t It Cool News is reporting that apparently Valiant is extremely happy with the results, and are fast-tracking production for the film. The move is set to follow writer Fred Van Lente and illustrator Clayton Henry’s run on Archer & Armstrong, which is about a pair of characters who have a penchant for brawling.

Archer is young man with the ability to mimic any fighting style he sees. He was raised by a religious sect who sent him out into the world to kill a man named Armstrong, who he’s been convinced is a demon. It turns out that Armstrong is not a demon, but an immortal man who’s spent most of the past 10,000 years chasing women, drinking beer, and getting into fights. When the two of them finally meet, Archer realizes that he’s been lied to, and the two unlikely partners take to saving the world.

AICN is also reporting that the Archer & Armstrong film will feature a secret Wall Street society whose members who wear bull and bear masks, and are called the One Percent, as the antagonist. Other Valiant characters are also slated to appear, including Armstrong’s brother, the Eternal Warrior, who has his own comic title within the Valiant universe.

With this news, as well as the the series Shadowman being written for film by Babylon 5 creator J. Michael Straczynski, and Matthew Vaughn (X-Men: The First Class) slated to direct another film based on the comic Bloodshot written by Jeff Wadlow (Kick-Ass 2), it seems that Valiant is looking to create a film universe not unlike that of the Marvel Cinematic Universe, or DC Comics’ forthcoming Batman v Superman: Dawn of Justice and Justice League films.

Of course, this is all just rumor, so you should take it with a grain of salt. None of the films in development have been given the greenlight, and there really hasn’t been much movement on Shadowman or Bloodshot, although both are being produced by Sony Pictures. With the recent rumors that Sony may be having second doubts about an integrated Spider-Man universe, you’d have to wonder if they’d be cautious about creating a second cohesive comic book universe with Valiant. The comic company has been around for over two decades, but had problems with bankruptcy, and their characters never became as popular in the mainstream as Marvel, DC, or even the worlds of Hellboy and Sin City.

So many studios are looking to create unified comic book universe, that it’s starting to wear thin on me. Marvel’s The Avengers did such huge business, that every studio is jumping on that bandwagon, instead of trying their own experimental approach. Let’s just hope that none of this leads to comic book movie fatigue for the general audience.

The post Feature Film Based On Archer & Armstrong Comic Book In The Works appeared first on Doddle.