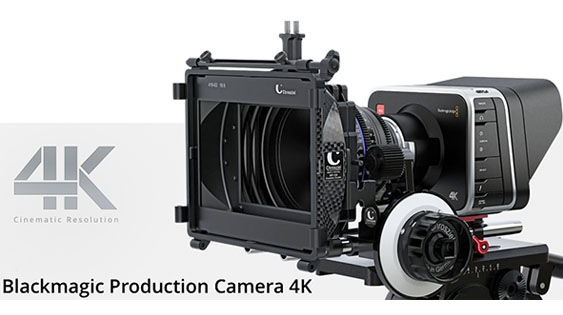 A day after someone in at the Australia office leaked it, Blackmagic officially announced the release of the Blackmagic Camera Update vs. 1.8, which brings, amongst other things, Raw DNG support to the 4K Blackmagic Production Camera. But there are other upgrades as well including a refreshed camera interface and better support for Canon EF and MFT lenses. Let’s take a look and see what is official in this update…

"We have been working very hard to incorporate camera feature requests that customers have been sending us" said Grant Petty CEO Blackmagic Design "There are major changes and improvements in this update and we are very excited to see the wonderful creative work done with the benefit of this software. Of course, we are working very hard on more features we want to add into our cameras and you will see more and more of what we have been working on in updates that will be release over the upcoming months."

Highlighted features in the Official vs. 1.8 update include…

The new code base that now operates at the heart of the Blackmagic Cinema Camera system promises improved performance and a streamlined menu interface that’s similar to the new Blackmagic URSA Camera, which was announced at NAB last Spring. This makes sense, as it streamlines the development process to write updates for all the cameras at once, without having to customize the feature set for an older menu system. And it gives both that older Cinema Camera and Pocket Cinema Camera a refresh that will provide it with better features and legs moving forward.

Users will be able to check focus with the touch of a button with EF-based lenses. And Blackmagic has enabled focus peaking and it can be utilized by double pressing the autofocus button. The focus peaking display is also a bright green, making it easier to see outside, and filters that generate edge peaking have been optimize for maximum sharpness. “This is important with high resolution 4K cameras where images are so sharp that accurate focus is critical for the best results,” writes Blackmagic in a press release.

Blackmagic has also improved audio performance and completely rewritten the software for the de-bayer processor in order to clean up images and give them maximum sharpness. It uses the same algorithms as those in DaVinci Resolve, which means that users can save a step or two when moving to color grading in post, and there’s no need for reencoding or rendering in between. Another features is that BMD has enhanced the Dynamic range of cameras shooting at ISO 1600.

But the stand-out feature is that Production Camera 4K users can now enjoy a Raw workflow with Cinema DNG support, something that users have been clamoring for. Bringing Raw to the Production Camera 4K allows recording in real time with all sensor data captured for greater dynamic range and better image quality when moving into post-production and color grading.

You can hear BMDs President Grant Petty talk about the new update here.

The update is available free to all Blackmagic camera customers and can be downloaded at Blackmagic’s website here. In other BMD News, Blackmagic also released DaVinci Resolve 11. Which now has a full featured editor and on set media management as part of it’s upgrades.

This all new code base also improves performance and includes a new modern user interface similar in design to the new URSA camera announced at NAB. This new user interface is included in all models of cameras available from Blackmagic Design, allowing a nice clean fresh look.

Blackmagic Camera 1.8 adds compressed RAW DNG support for the Blackmagic Production Camera 4K model, and this allows RAW recording in real time so all sensor data can be captured allowing more range and much higher image quality when doing post production and color grading. DaVinci Resolve 11, also available today, fully supports RAW grading and rendering to final output direct from the RAW camera original files. This means customers get incredible first generation masters, with a solution that edits RAW files as easily and as responsively as a normal video file.

New features in this update include enhanced lens control support for EF lens mount cameras such as the original Blackmagic Cinema Camera EF and the Blackmagic Production Camera 4K models. This means customers can now get auto focus when pushing the focus button on active EF based lenses and the cameras will mathematically analyze the center of the image and optimize the focus for maximum sharpness.

This is important with high resolution 4K cameras where images are so sharp that accurate focus is critical for the best results. Because this update uses the focus button for auto focus, the focus peaking feature is now enabled by double pressing the focus button.

This release also improves the focus peaking display allowing incredibly accurate and super sharp manual focus, critical when using cine lenses. The focus peaking is now green in color so it's much easer to see, and the filters generating the edge peaking have been optimized allowing for better detection and display for maximum sharpness. In addition, the iris control has been changed, due to customer request, to hold its setting between record and playback.

This new Blackmagic Camera 1.8 also includes major improvements for the original Blackmagic Cinema Camera models including improved audio performance and a completely rewritten new higher quality de-bayer processor. This new de-bayer means when customers record to normal video files such as ProRes or DNxHD they will get sharper and cleaner looking images. This new de-bayer processing features algorithms that have been incorporated from DaVinci Resolve, which means that Blackmagic camera customers get the benefit of DaVinci Resolve's research and development in image processing and its partnership with major Hollywood studios.

Other benefits for the original Blackmagic Cinema Camera includes enhancements to the cameras dynamic range when sooting at 1600 ISO. This means, with this new software update, customers will get even more dynamic range and image quality, free of charge, even if they purchased their camera 2 years ago.

Improvements for the Pocket Cinema Camera are also included in this update, including the modern updated interface, new focus peaking and improved de-bayer quality, plus additional active MFT lens support for lenses including Sigma and Lumix.

"We have been working very hard to incorporate camera feature requests that customers have been sending us" said Grant Petty CEO Blackmagic Design "There are major changes and improvements in this update and we are very excited to see the wonderful creative work done with the benefit of this software. Of course, we are working very hard on more features we want to add into our cameras and you will see more and more of what we have been working on in updates that will be release over the upcoming months."

Availability and Price
Blackmagic Cameras are available now starting from US$995 from Blackmagic Design resellers worldwide.