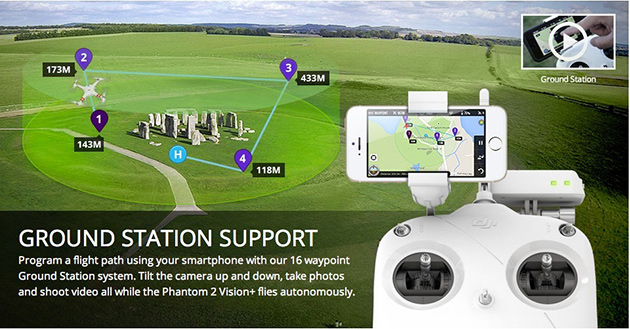 DJI has expanded the feature set of the Phantom 2 Quadcopter line by giving it the ability to map out a route and automatically fly it. Using Ground Station, shooters will be able to create a route full of way points in order to let the quadcopter fly automatically from one point to another, and allow the shooter to concentrate on getting the shot. And it’s just what the pilot ordered.

DJI has released the Ground Station function for Phantom 2 Vision and Phantom 2 Vision+ users. This function will be available within the updated DJI Vision app for iOS and Android. Program a flight path using your smartphone with our 16 waypoint system. Tilt the camera up and down, take photos and shoot video, all while the Phantom 2 Vision flies autonomously. – DJI

Ground Station has been around for awhile now, but there hasn’t been an update for the Phantom 2 Vision+. This update will enable Vision 2+ pilots to use their mobile devices to perform what is essentially a defacto motion control and repeat the flight path to get several shots and several takes. The features of the new version of Ground Station include:

Ground Station also allows users to key in a no way point zone to prevent the quadcopter from going where it isn’t allowed. This will enable users to honor the wishes of the land holders or local law enforcement who may put limitations in on set filming from above. For instance, you can’t fly within 8km of a local airport, and Ground Station knows it. So if you’re too close, you won’t be able to program the route unless you work outside of restricted airspace.

Ground Station lets you fly your Phantom like never before, making flight simple enough so creators can focus on getting the right shot, rather than the mechanics of flight. – Michael Perry, DJI Public Relations

Users must have the latest firmware installed in their Phantom 2 Vision, as well as the updated Vision app for The DJI Vision app is being updated to iOS (v1.0.41) and Android (v1.0.50), in order to use Ground Station. Then, it’s simply a matter of enabling it in the flight controller menu interface from your mobile device. You also have to make the lawyers happy by agreeing to the disclaimer promising not to sue DJI if mayhem occurs.

With all that out of the way, you can then go onto the camera screen, swipe left into the interface and work out your way-point flight path, setting for such flight elements as altitude, speed, and navigation. Once set, you choose go and the Phantom 2 takes off and runs through it’s programmed flight plan while the camera man focuses on getting the shot. Users can also download a variety of flight templates which enable users to fly in set patterns.

But I rather like that when the battery level falls below 30%, the Ground Station software disables and the Phantom 2 flies back to the point of origin. And if you want to rework your flight path, you can tell the Phantom 2 to come home with the touch of a button and start over with the programming sequence, rather than wait for it to run through its existing flight path and that saves battery time. You can also take back over by flipping the S1 switch down and then back to GPS mode. This puts you in manual flight and you can take over.

In other quadcopter news, the FAA has finally come out with a basic set of rules that will enable hobbyists to enjoy drone flight without worry of the long arm of the law descending upon them. According to USA Today, the rules include a provision that allows hobbyists who fly quadcopters weighing no more than 55 pounds to do so legally. ”We want people who fly model aircraft for recreation to enjoy their hobby -- but to enjoy it safely,” Transportation Secretary Anthony Foxx said.

Rules include a provision that requires the drone to remain within eyesight and away from any other aircraft or airports within a five mile radius. Users must also notify air-traffic control if they are flying close to any local airport.

The rules, however, do not govern flight of drones for the purposes of activities that include filmmaking, real estate agents, or any other commercial flight. Those rules are still being written and as of now, commercial drone flight is still stuck in a legal neutral zone and as such, are frowned upon until the FAA can work out the rules to govern such activities.

Meanwhile, the hobby rules are in effect immediately, but the FAA is opening a 30-day mandatory commentary window, and may change them as that they get feedback. When will commercial rules be announced? Well, that’s anyone’s guess. But the fact that we have basic rules (and really, they’re based on common sense so anyone should already know better), we can begin to move towards a legitimate commercial drone flight envelope.