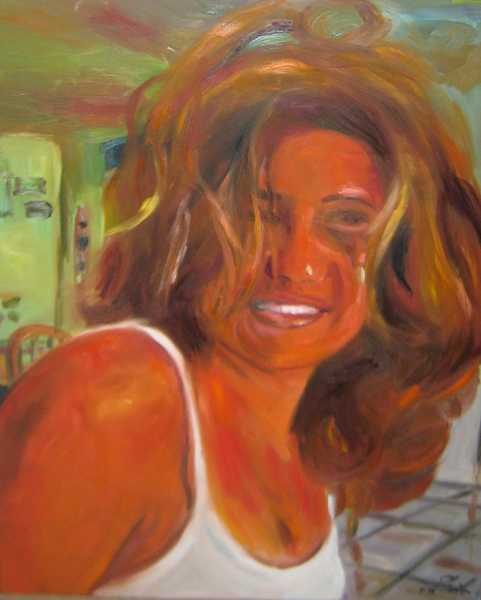 UserName: SheilaFraga City: Miami State: FL Followers: (3) Sheila Fraga Biography 2015 Sheila Fraga was born on January 11th, 1978 in Havana, Cuba. She studied painting at San Alejandro Fine Art Academy and graduated in 1999. Her daily life facts and spiritual thoughts are inspiration during her early paintings. She used a multiplicity of techniques in paintings, drawings, installations and cut-outs. Self-portraits were her maximum exponent at this stage of life. Afro-Cuban motives and the female figure are present at her artworks. Critics and art instructors have valued Sheila’s paintings on how she mastered the use of the light and color and have appreciated the force of Sheila’s drawing lines and the human figure itself. Sheila immigrated to the United States in 2004 after exposing with a group of young Cuban artists at the University of Aveiro, Portugal. This exhibition named “Identifications” was curated by Sacramento Contemporary Art Gallery and received good reviews from the local newspapers and critics. Over the past 10 years, Sheila artworks can’t be framed under one style of painting, although her Afro-Cuban heritage and the nude female figure are always present in her works. Recently, she has started a series of paintings using the concept of “recontextualization” to revitalize her previous works. Taking the collage as the dominant techniques, Sheila had given new life and strength to her latest artworks, such as in *Homo Universalis”, “The Nutcracker is here” and “the Garden of Eden.” Sheila has been influence by several Cuban and International artists from different artistic movements as Abstract surrealism, Russian constructivism and cubism. Her career continues to evolve and she confesses to be in process to searching to find her own style working hard with her brush in hand without losing her enthusiasm and desire to work. Sheila married in 2007 and has two children, Chelsea, 8 and Samuel, 6 years old. Awards and Exhibitions 2001 - Grand Prix at Flora 2001 in Homage to painter Rene Portocarrero for her pastel painting “ Mother Feelings”. Her paintings can be found in permanent collections at Aveiro University, Portugal at several galleries in Havana, Cuba, at Rome, Italy and at private collections in different countries. In 2007, Sheila completed all illustrations and cover of the book written by Rodolfo Bofill “ Dreams of an Illegal Allien.” Fraga’s paintings have been donated to several charity organizations against cancer and fundraising to help autism. In 2009, Sheila participated with 4 artworks at ArtFusion Gallery, Design District, Miami, Florida. This event was curated by Art Director William Braemer. In 2014, a painting was selected to participate at the 3rd Annual International Juried Exhibition of Contemporary Islamic Art at Luminarte Gallery, Dallas, Texas. Curator Art Director Matt Anzak. Sheila Fraga Biography 2015 Sheila has also participated in other projects such as “Art takes Miami and “Scope Art” in Miami, Florida. Paintings are presently exhibited at Sala Furniture, Art Circuit Cigar and Guantanamera Cigar Store located at Little Havana area. Most of her artworks can be reach at online art websites like: https://www.facebook.com/SHEILAFRAGAARTTASTE?fref=ts http://instagram.com/bwsilhouette http://www.saatchiart.com/cheshe http://www.artwanted.com/artist.cfm?artid=46569 http://www.absolutearts.com/portfolios/s/sheila/ http://www.xanadugallery.com/2013/Artists/ArtistPage.php?ArtistID=5912 http://www.pitturiamo.it/Sheila-Fraga-5047.asp