The Leiber Collection: Judith and Gerson Leiber's Beauty, Bliss and the Bag 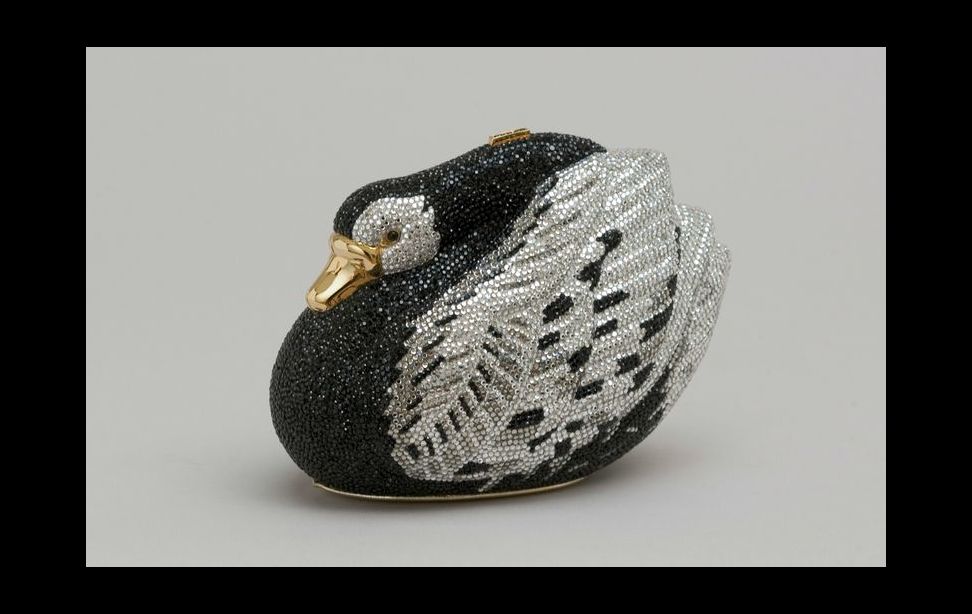 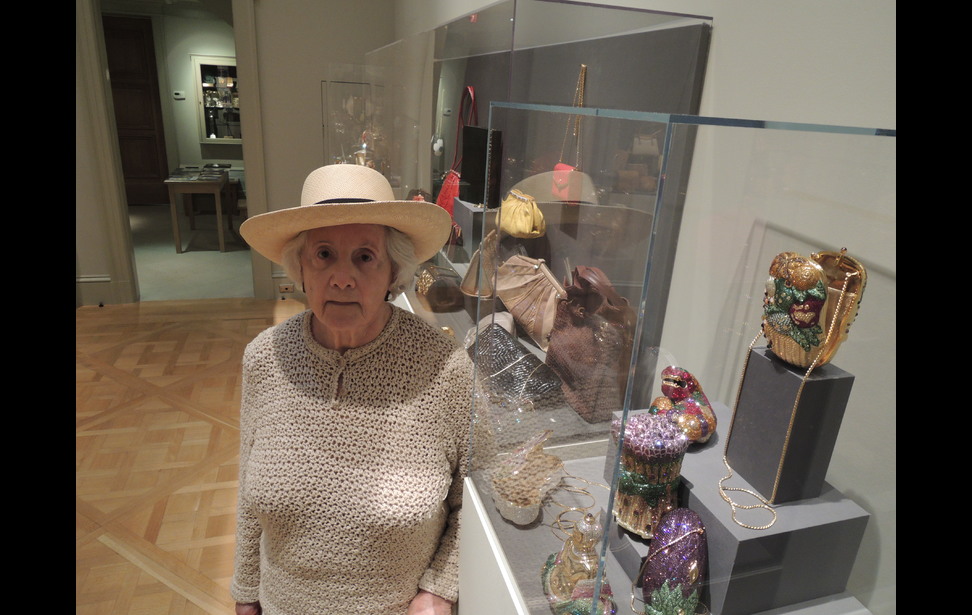 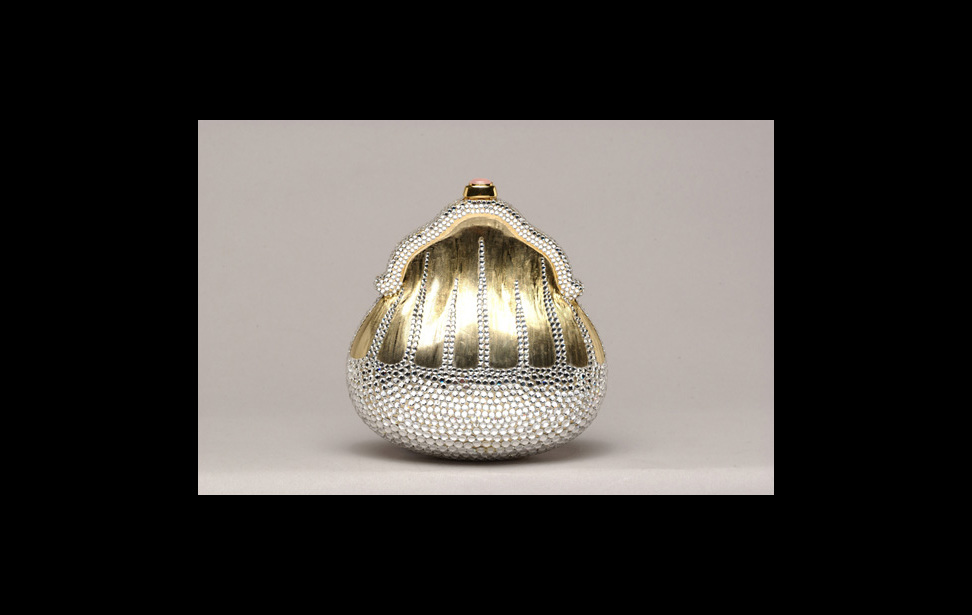 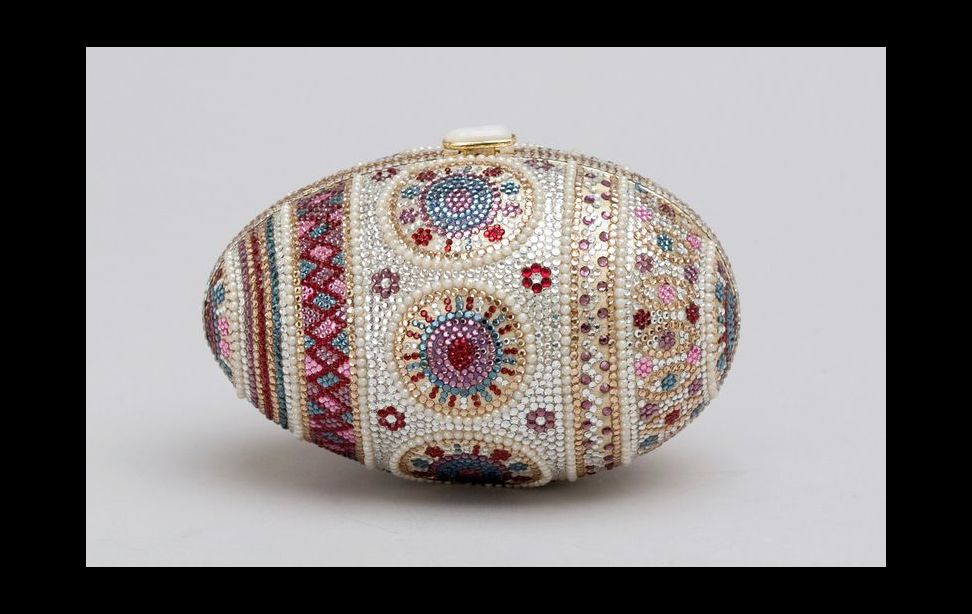 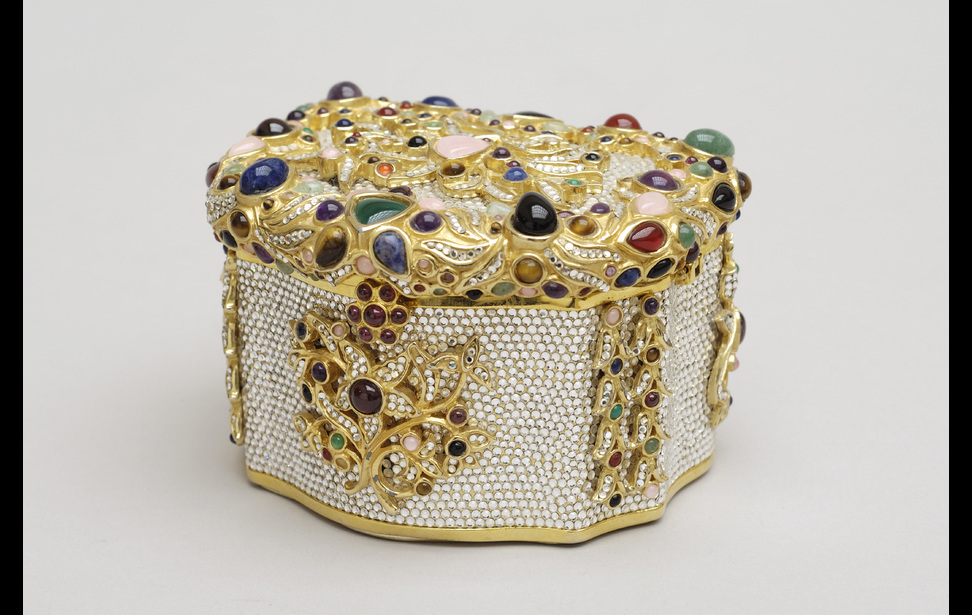 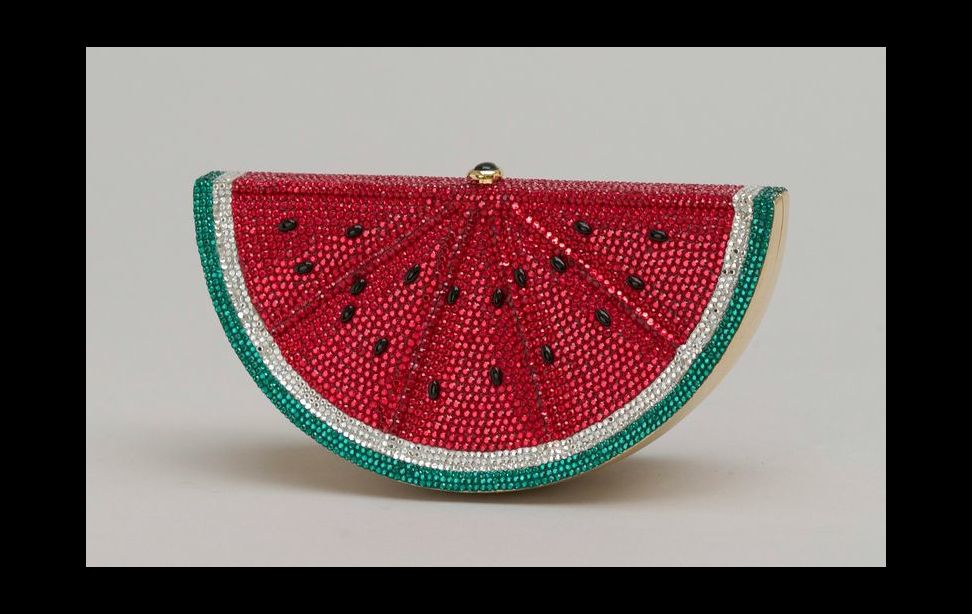 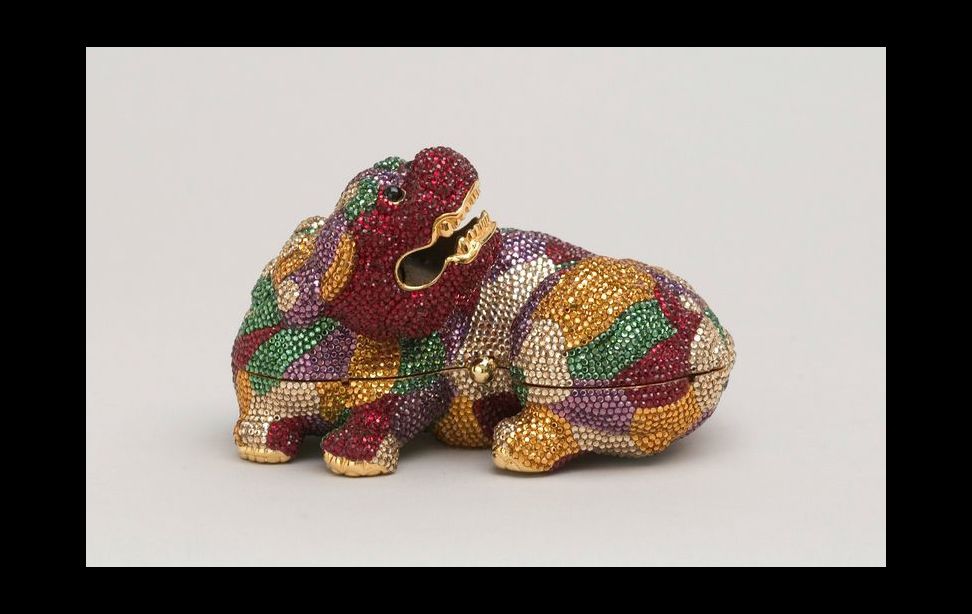 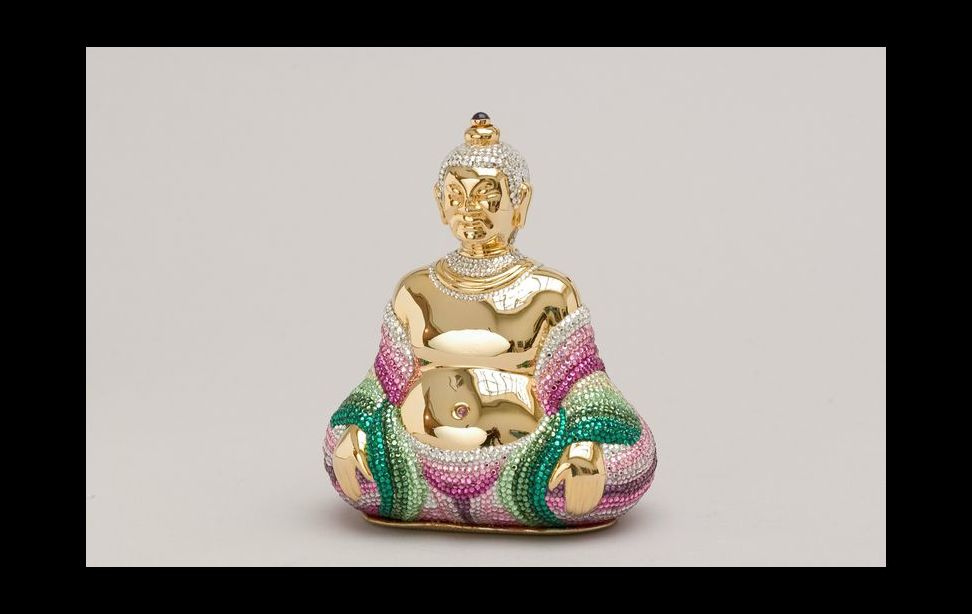 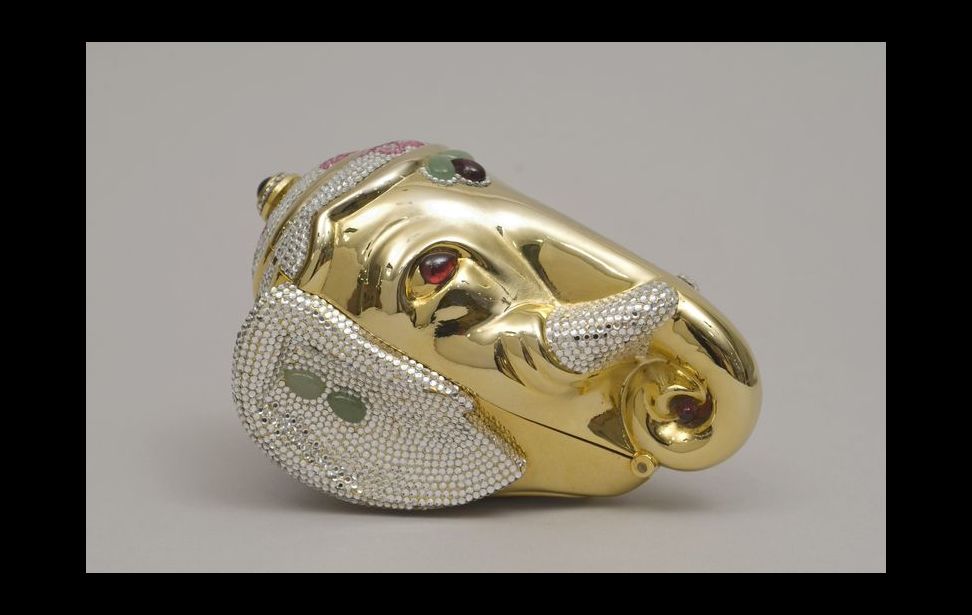 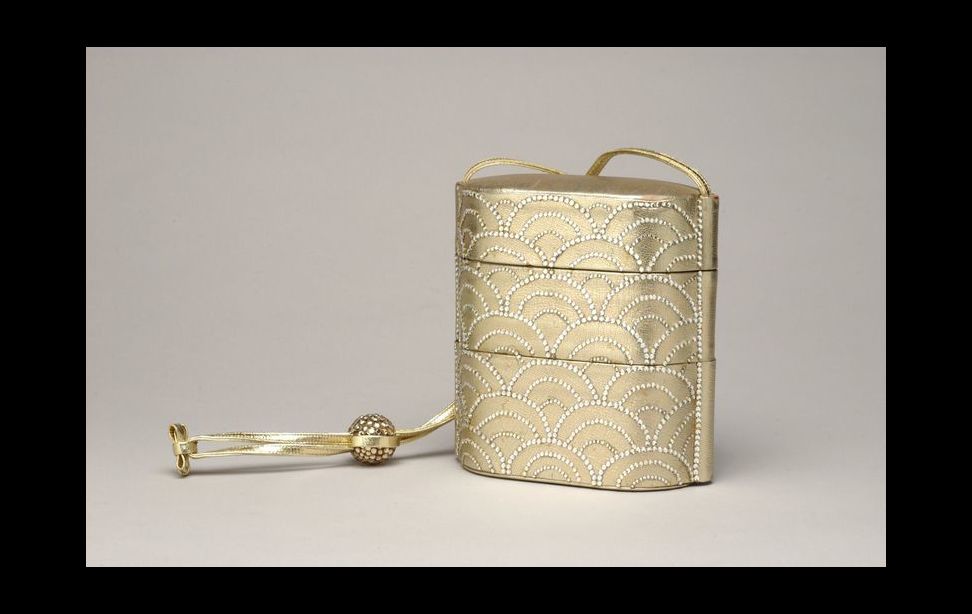 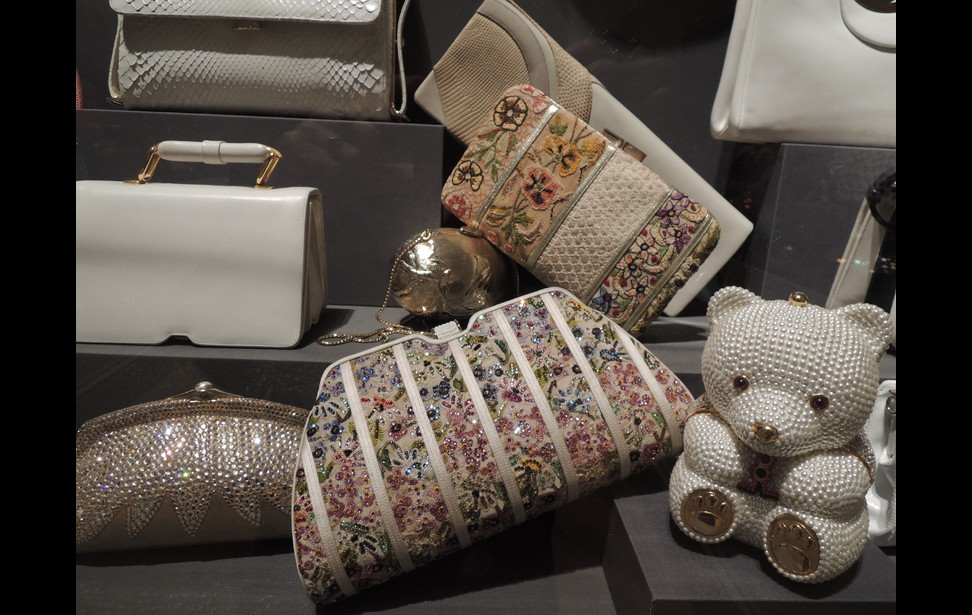 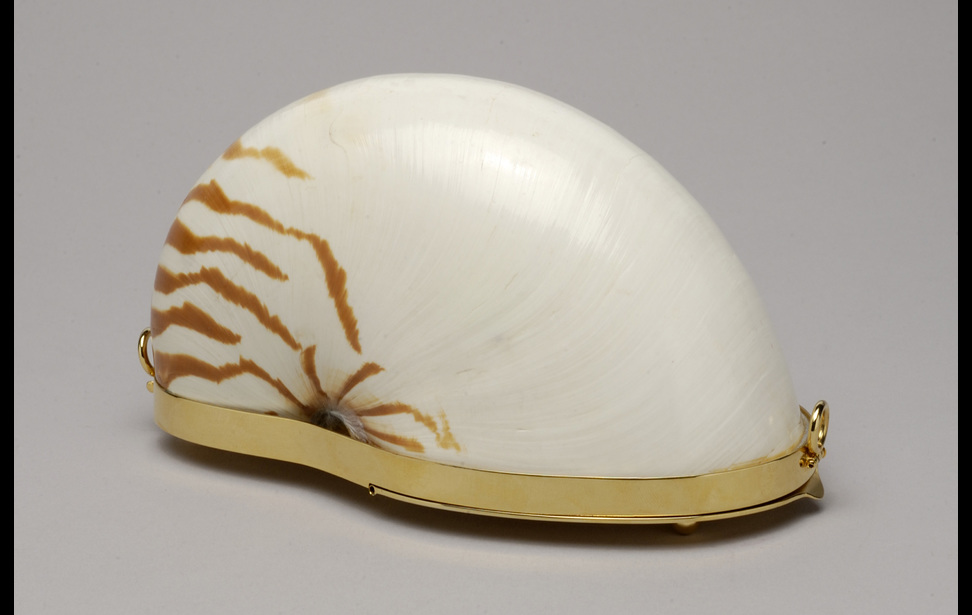 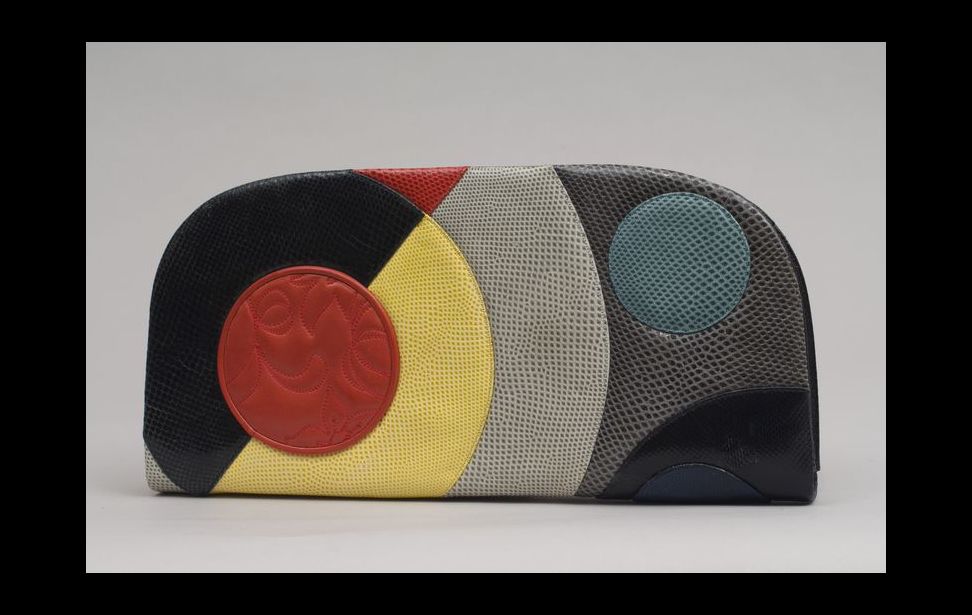 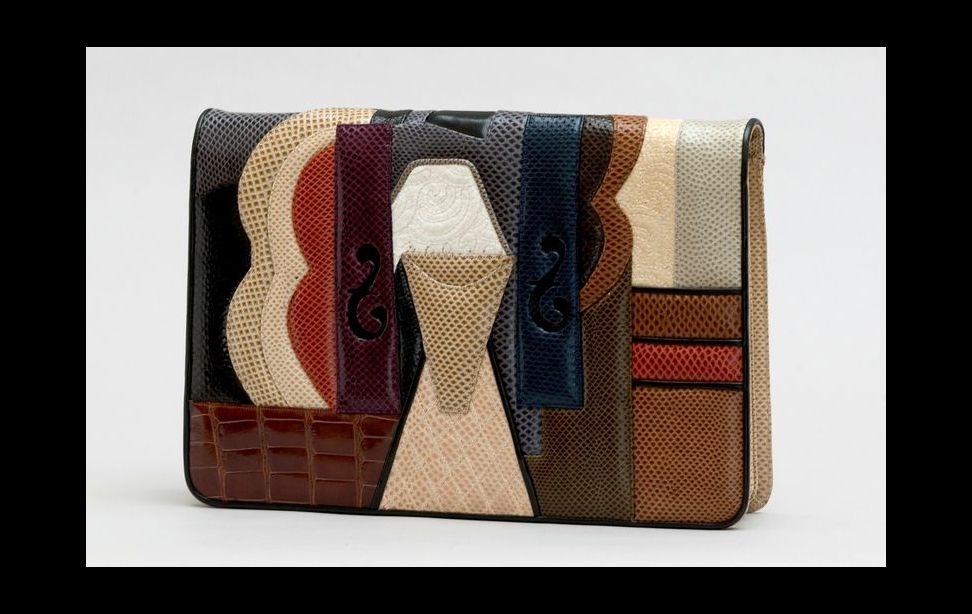 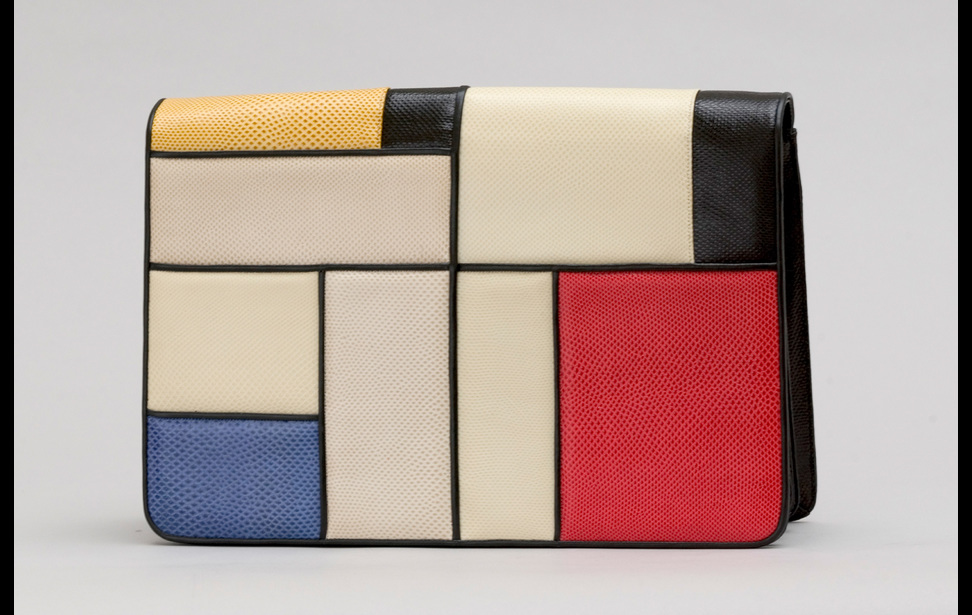 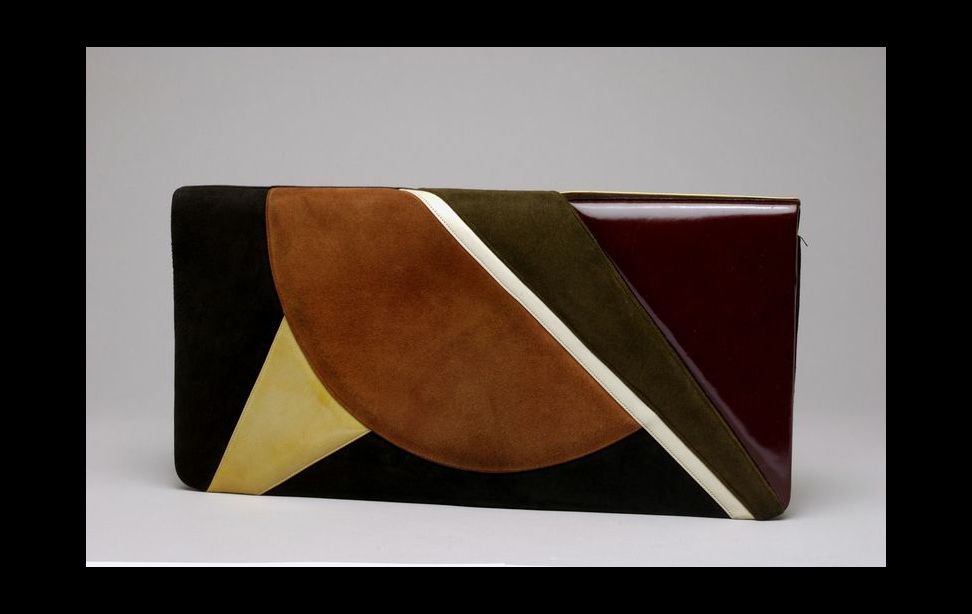 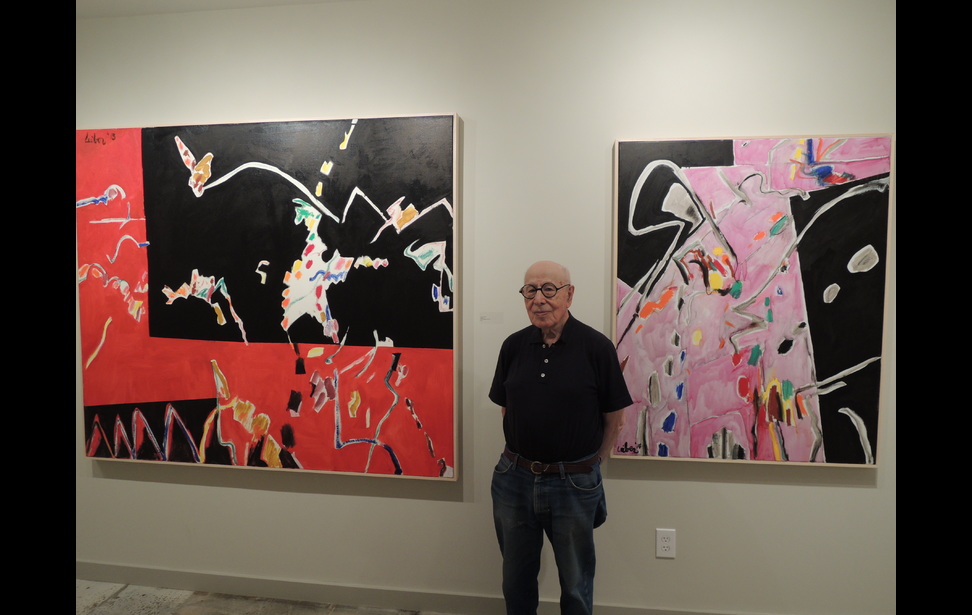 EAST HAMPTON, NY -- Judith Leiber, you might gather, is a blithe eccentric drenched in jewels and painted like Madama Butterfly. You'd gather wrong. Though best known for her glittery evening bags fashioned like frogs, Fabergé eggs and everything in between, the luxury accessories designer is decidedly low key, more viola than ukelele.

Boldface names like Kim Kardashian, Elizabeth Taylor and First Ladies beginning with Mamie Eisenhower have snatched up her whimsical, iconic purses, which have also appeared on such television shows as Sex and the City (as seen in photo 1). The 93-year-old creator put more than a half a century into engineering and adorning the work based on craft traditions she learned in her native Budapest. Considered an objet d'art, a Judith Leiber original can fetch anywhere from $700 to $7,000 at upscale retail stores.

It's nearly impossible to see Leiber's exuberant creations without figuring they're the ventriloquy to her deliberate persona. Some 500 of them fill the glass cases of the Leiber Collection, the East Hampton museum that she and her artist husband, Gerson, founded in 2005. The current exhibition is entitled "The Marriage of True Minds." There's jewelry in the mix, along with belts and pillboxes, but mostly we're talking handbags (as seen in photo 2).

"We have an awful lot of bags," Leiber said with Old World understatement when I met her and Gerson one recent summer afternoon. "Totally we own about 1,500 bags, but I made about 3,500 hundred in my career." In the early days, Leiber concocted each piece from conception to pattern to design and even skiving (thinning leather edges). One single handbag can take up to two years to produce from beginning to end.

Take her minaudières, for example. These signature metal carriers are "composed in wax by a sculptor, with my guidance," she explained, adding, "A steel dye is then made from this wax piece. From the steel dies, the brass piece is stamped; then it is gold or silver plated." Next, crystal by crystal, the outlined design is "realized in a process involving a wax-tipped wooden stick holding the crystal" and placing it on a dab of glue. Leiber went on to say that an individual bag can contain up to 13 thousand rhinestones, seizing the better part of a week to hand-decorate. To hear her shoptalk is to understand that her love of the final product is only rivalled by her love of the technique.

The first minaudière Leiber ever made is her favorite. "It came in from Italy so badly stained that we had to cover it with rhinestones," she said. That was the 60s, when the plating left much to be desired. But the result, a dainty brushed silver affair with a pearl drop silhouette, took off. "We started the rhinestone business," Leiber brightly reminisced. Dubbed the Châtelaine, this serendipitious success has been recreated 3,500 times, more than any other item in the Leiber oeuvre (as seen in photo 3).

The shimmers gave Leiber a new vocabulary for expressing her wit and for translating design ideas. Imperial Fabergé eggs hatched a product line (as seen in photo 4) that has become so identified with Judith Leiber that some customers simply call them "Leiber eggs."  Encrusted with Swarovski crystals, the artful ovoids hark back to 1987, when the Duchess of Windsor sold her collection to Sotheby's. Leiber recalled, "I picked up the idea and made an awful lot of eggs, many different ones." Her spark paid it forward. "It inspired the Swarovskis to make jewelry using their own beads."

Among Leiber's other royal muses was Frederick the Great. In the 80s, she came across the Prussian Emperor's collection of "heavily jeweled boxes" in a book of metal bags. The resulting pint-size treasure chest packed serious bling (as seen in photo 5) and arguably a whiff of irony.

Leiber's regal flourishes have shown up on queenly arms including Elizabeth II's. For Hillary Clinton, on the occasion of her husband's second inaugural, Leiber did up a carrier all in gold. Unfortunately, "the girl who made her dress wanted to make the bag, but I bet Mrs. Clinton still has my bag," she said. "The girl prevails," Gerson chimed in.

Asked about his preferred handbag, the acclaimed abstract painter -- whose own work shows a kindred passion for color, composition and texture -- pointed to the watermelon-shaped minaudière with red, green and white crystal rhinestones and seeds etched in onyx. The palette partly overlaps with that of a Chinese foo dog constructed in miniature but guaranteed to draw maximal attention (as seen in photos 6 and 7).

Asian accents abound in the collection. There are glimmering Buddhas and Thai elephants along with clutches cut from Japanese obi´s overlaid with beads. Other evidence of Leiber's adventurous taste runs to netsuke toggles, to Parsee ribbons on fabric frame bags, to vintage embroidery from Bombay. But everyday stuff has also ignited her imagination: an eggplant, a frosted cupcake, a bunch of asparagus. In the case of her seashell line, she has appropriated not just the concepts, but the real integuments as nature made them, and custom-built metal lids -- with the engineering of a luxury car (as seen in photos 8 - 12).

"The ideas flowed," Leiber mused. "Sometimes I didn't know where they came from." Often she borrowed from other arts. Sonia Delaunay's cheeky wit lingers in the swirls of a celebrated envelope bag. Works by Georges Braque and Piet Mondrian are memorialized in similarly colorful envelopes displayed in the same étagere. And the bag that earned Leiber her first Coty Fashion Award -- cracking the male grip on fashion's most prestigious prize -- took a page from the Bauhaus. It's as if Leiber painted with leather. And not just any hides would do: exotic species such as ostrich, alligator, karung snake and python regularly turn up in her ménagerie (as seen in photos 13 - 16).

No designer as prolific and beloved as Judith Leiber could hope to hold onto her complete works, and in her case such hopes were dashed when she sold her company and brand name in 1993. The terms of that $18 million deal included turning over "all of the bags that were in the office," as she noted with a trace of chagrin. "That's what they insisted on: the people who bought it said if I don't give them the bags, they won't buy the company." Through eBay and other means, Leiber has managed to reacquire more than 900 of her pieces. Others are in the permanent collections of such venerable establishments as the Smithsonian Institution, the Metropolitan Museum of Art and the Victoria and Albert Museum.

As Leiber has seen, uncomely behavior can crop up with beautiful collectibles. The late opera singer Beverly Sills owned around 200 of Leiber's handbags, "and she was originally going to will them to me when she died," Leiber recounted, "but her daughter didn't give me the bags." The setback is all the more poignant given that Leiber's creations are her babies. Sills junior gave her only four bags, "of which three were nothing and the fourth one was a bag that I gave Beverly as a gift and which had her name on it," said Leiber. Sills' daughter reportedly kept some of the bags and sold the rest at Doyle New York Auctioneers & Appraisers. "I wasn't going to go there," as Leiber put it.

Looking back on her career, the legendary designer Judith Leiber née Peto recalled how the handbag thing all started. "My father used to travel a lot around in Europe. He brought my mother many nice leather bags, which I loved." Originally, though, the well-off Petos wanted their gifted daughter to go into cosmetics. "So I was registered at Kings College to study Chemistry, but I came home for the summer and the war broke out and I couldn't go back to England," she said.

It was 1939, a time when Jews like the Petos were increasingly shut out from the elite professions in Hungary but could still enter craft guilds. Leiber joined the handbag Guild and apprenticed at Budapest's premier handbag company, Jewish-owned Pessl. Some 75 years later, there's no mistaking her satsifaction at having broken the gender barrier. "I was the first girl apprentice in Hungary -- until then they were all men." Yet her crowning gratification remains the soup-to-nuts skills she picked up as apprentice, journeyman and finally master.

World War II put Leiber's life and work on hold. "The war got so bad, you couldn't do anything anymore," she said. For months she hunkered down in one room with 26 people without venturing out, and ended up in the notorious Budapest Ghetto. "We were lucky that we were alive," Leiber said. The family eluded Nazi deportation thanks to a "Schutz" pass that a family contact arranged through the Swiss legation. In 1945, after the war, American G.I. Gerson Leiber fell head over heels for the alluring designer while walking down the street on his second day of being stationed in her war-ravaged city. Two years later the young marrieds settled down in New York. Leiber spent a dozen years working at various handbag companies until, at Gerson's urging, she launched her own couture brand in 1963.

Her debut line was monochrome, in deference to trade practice at the time. The following season, to spruce up sales, she took her cue from the rainbow. Whatever WWII may have done to subdue Leiber's demeanor, it did no such thing to her aesthetic sensibility. As Leiber's designs became increasingly stylish, the mystique around them only grew.

Fashion historian Caroline Cox's observation that "handbags are both revealing and concealing" neatly sums up this paradox in Leiber's vessels of seduction. The author of The Handbag: An Illustrated History has traced the lingering sex appeal of purses to their origins as a silk pouch or pocket hugging the skin like an undergarment. To this day, according to Cox, the bag "is still very closely associated with all of our most intimate possessions." For her part, Leiber seems less beguiled by the private connotations of the handbag and more taken with its function. "Women have to have something to carry her stuff in" was her answer to, What's the significance of bags?

Happily, her husband of 68 years has never lost his fascination with Judith Leiber products and certainly not with their maker. (She was his first girlfriend.) As I admired Gerson's Modernist tableaux occupying a room of the first-floor gallery, I couldn't help wondering if they're the Yang to Leiber's Yin, or visa versa (as seen in photo 17). The Brooklyn-born, Pennsylvania-raised printmaker-and-sculptor-turned-painter -- whose paintings grace numerous permanent collections including at The Met, MoMA and the National Gallery of Art -- has been an integral partner in the Judith Leiber enterprise. He also styled the gardens around the Palladian-style villa housing the Leiber Collection. On my way out, taking in the play of light and shadow, I asked him about the grandly grounds. How fitting that the seven-acre idylia of these two flourishing artists was partly inspired by the Renaissance.

Photo 1: Swan-shaped Minaudière with Black and Silver Crystal Rhinestones, 1990, Featured on "Sex and the City." Photo by Gary Mamay courtesy of the Leiber Collection.

Photo 13: Envelope in Multicolor Karung and Calf Inspired by Sonia Delaunay, 2000. Photo by Gary Mamay courtesy of the Leiber Collection.