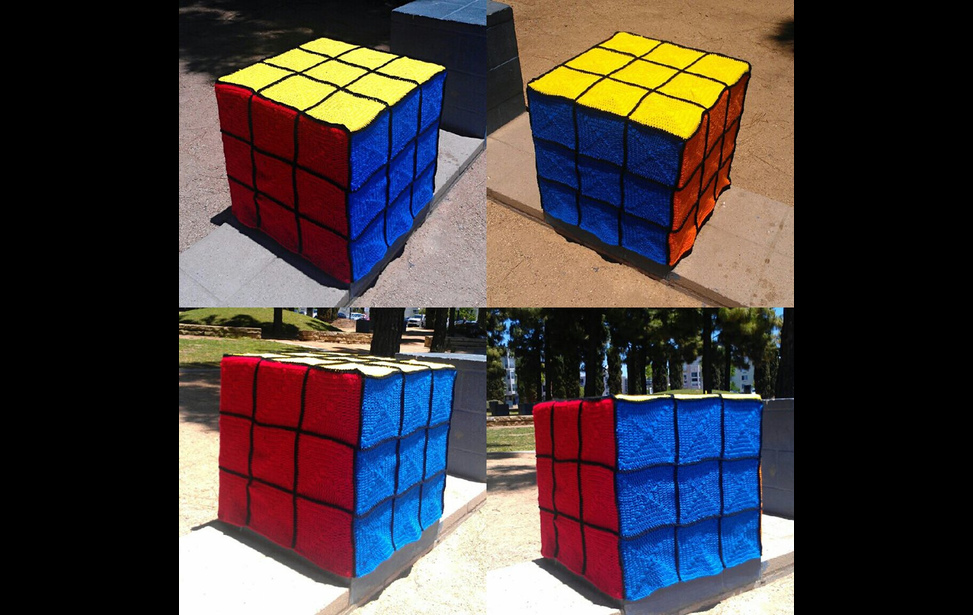 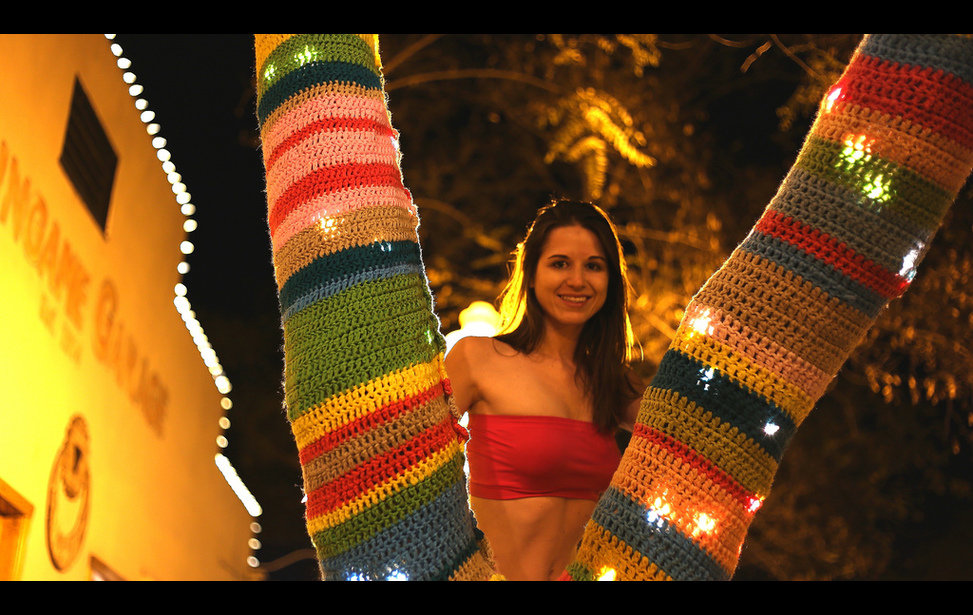 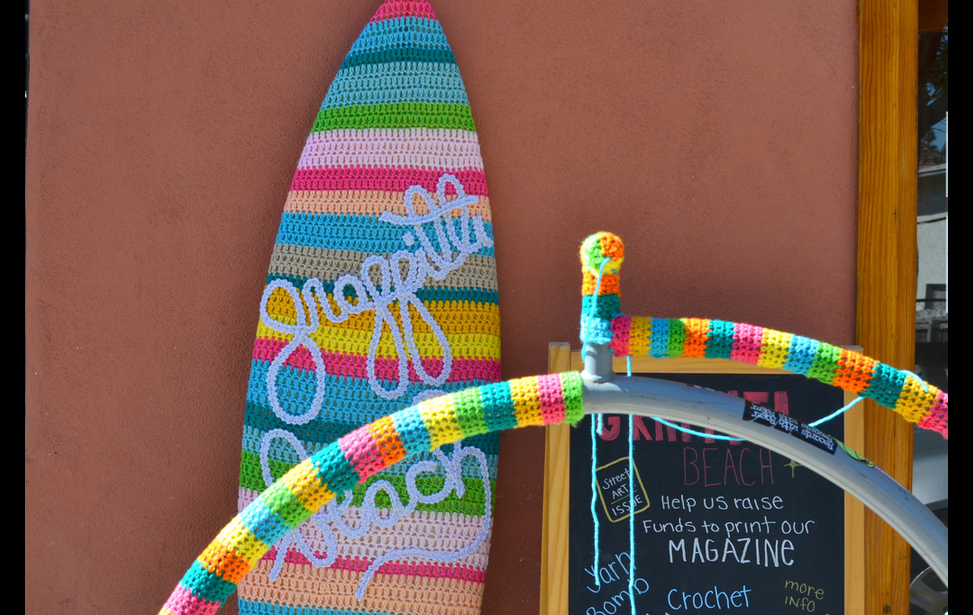 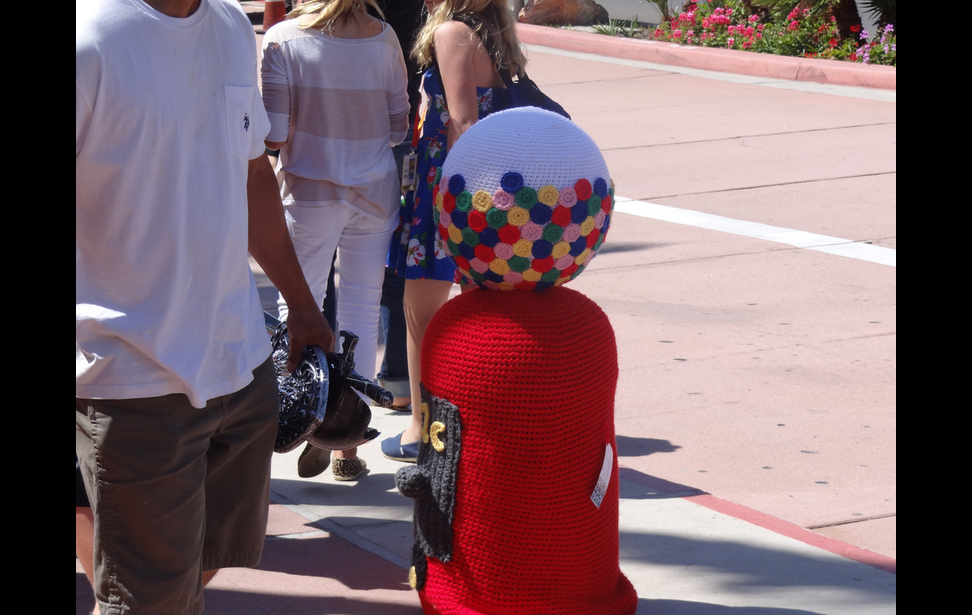 SAN DIEGO, CA – Just knowing that Marcy Kraft is a Southern Californian mom who loves to crochet doesn’t really express what she’s capable of, or indeed, what the world is up against. She’s a street artist who creates many public works (as seen in photos 1 - 4) under the alias Crochet Grenade. What she does—yarn bombing—comes across just as fun as it sounds. But her art also requires a great deal of planning and attention to detail in its construction. Maybe it’s the softness of working with yarn, or maybe it’s the undeniable frivolity in the colorful creations she releases into the world, but Marcy Kraft is making the planet softer and brighter one public space at a time.  Thalo sat down to with Marcy to learn more.

thalo: Can you explain what yarn bombing is and how you first became involved with the process?

Marcy Kraft: Yarn bombing is the process of covering every day objects found in public places with either knitted or crocheted yarn without permission.  Although "bombing" typically refers to throwing up a piece of uncommissioned art or vandalism, covering objects in yarn has also become an art form that many businesses and neighborhoods enjoy and request.

th: So, then, have you ever yarn bombed a space without being asked?

MK: I first started yarn bombing under the alias Crochet Grenade because all of my work was done without permission. As people started recognizing my work in the San Diego area, I started getting requests to put up commissioned fiber art displays.

th: On the Westfield Mission Valley Yarn Bomb project you had a bunch of people help you out and even had some people mail you pieces that you included. To what degree does collaboration play in most of your work?

MK: For most of my projects I have made the work myself, but I have organized a few collaborations. On the Westfield Mission Valley project, I was given 30 days to cover an entire promenade in the mall to promote their DIY Fest. Given such a large scale task in short amount of time, I was inspired to cover as much surface as possible in the mall with help from others to make it the most impressive display that I could. I gathered enough support from followers and friends online to spread the word and send in pieces and then gathered my group of knitters and crocheters from San Diego to work on our pieces during weekend meet ups in the mall.  Even with collaborations, I prefer not to rely on the volunteer work of others and work endlessly day and night crocheting my hands off so that I complete majority of it myself.

th: And how do you usually go about the actual creating process of your works?

MK: Based on my style of transforming street objects into other recognizable objects like the Rubik’s Cube on a cement block, I see something in my mind and then I gather measurements and try to re-create whatever it was I was thinking about. Because there is no pattern, I have to make it up!

th: Does the weather ever effect your work's placement out in the world?

MK: The weather and environment has a tremendous affect on yarn in the outdoors.  After just a few months, the sun begins fading the yarn. In a year, it can be almost faded to white depending on the type of yarn used. If it rains, the rainwater can make the yarn turn brown when the dirt seeps into the yarn. I covered a bike rack in the shape of a bike outside of a small boutique called Graffiti Beach in South Park, San Diego, CA. So many people took pictures pretending to ride the yarn covered bike rack that the yarn really started to fuzz up! I have also covered a tree and the bottom of the tree got really dirty because the weekly street sweeper kicked up all the dirt in the street onto the tree and dog owners would also let their dog go to the bathroom on it.  The nature of yarn bombing is that it is temporary and therefore the time that it goes up is fleeting and it is almost like a special treasure to capture it in it's most fresh form.

th: What about their removal? What ultimately becomes of most of your projects (like your Graffiti Beach surfboard, for example)…

MK: Some of the original things that I have put up in public have never come down to my knowledge because I haven't made a trip to the part of town to see it.  Part of me doesn't like to go back and check on them in the days or weeks after I put them up because it feels like a stab in the heart to go back and find that it has been stolen or removed. When I do projects for businesses, the amount of time that it is left up is based on an agreement.

th: Because of the nature of your chosen medium (knits/crochet) your work lends a real softness to the otherwise harsh world of street art. To what degree do you consider the tactile aspect of making these pieces that are meant to exist in public?

MK: There are a lot of things I have come to consider through doing this work. For example, I chose to do the Rubik’s Cube project in Children’s Park in Downtown San Diego across the street from the convention center. Ironically, Children’s Park is very dull and doesn't have a playground, nor does it have anything for children to do in it—it’s basically populated by homeless people to sleep in. I arrived to Children’s Park the morning of the Rubik’s Cube installation and there were groups of homeless people sitting around doing drugs and sleeping. After I put up the cube installation and filled the park with such vibrant colors, I noticed that the homeless crowd started leaving the park! Later in the day the park started filling up with Comic-Con attendees during lunch time, and when I looked around the park, people specifically chose to sit on the Rubik’s Cube yarn covered cement cubes versus the [originally uncovered] hard, cold cubes.  As people were leaving, I had many people thank me and comment on how [the work] made it more soft to sit on.

th: Those Rubik’s cubes are a perfect example of the really whimsical feeling to your work. Is that feeling what inspires you to create--or is your motivation deeper? Do you feel that calling your work whimsical is undermining its importance?

MK: Besides being an artist I am also a full time mother and I am endlessly inspired by my daughter. [The inspiration] translates through my work. My style typically has a sense of nostalgia or whimsy to it, but I don't feel that it undermines its importance. By putting something in public, I really want to brighten people's day and make them smile as they discover my unexpected artwork. I like to also add a sense of interactive quality to it, like with the knobs on [previous works] the Etch A Sketch or the gumball in the dispenser. I love that it makes it almost impossible for people to walk by and not touch it or pretend with it, which is fun because it brings out the child in adults.

th: What kind of responses do you get from the public? How do people tend to react to your work?

MK: It delights people. They want to touch it. Ask lots of questions. Take lots of pictures. People are always so thankful and sometimes shocked. I love the reactions that I get! I have had people have a minor freak out because they felt so privileged to have caught the "yarn bomber" in action.  It is sort of challenging to install in public during daylight hours because everyone wants to stop and ask questions, but I love the opportunity to engage with everyone who comes up to talk and request pictures.

th: Any works planned for the future that you can share?

MK: There are a couple ideas in mind that are building inside of me and waiting to explode, but everyone will have to keep an eye out to see what happens next by following me on my Facebook page (www.facebook.com/crochetgrenade) where I announce all my upcoming projects or post pictures of installations.

All photos courtesy of the artist.