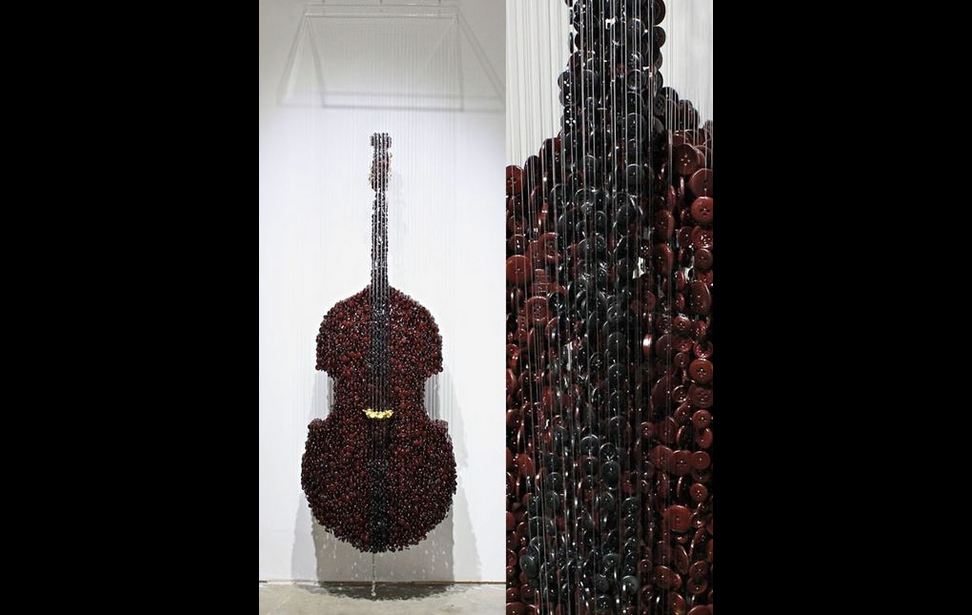 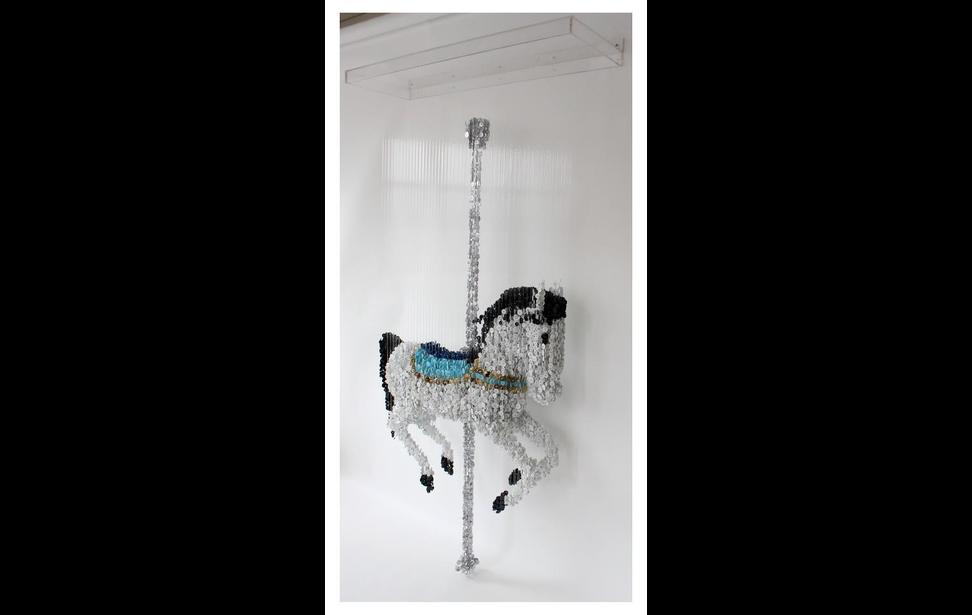 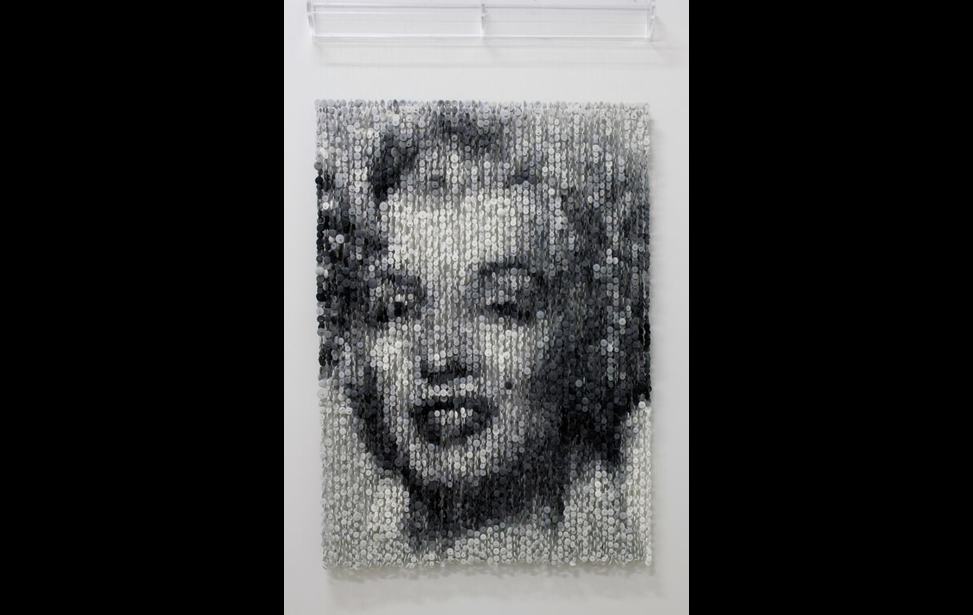 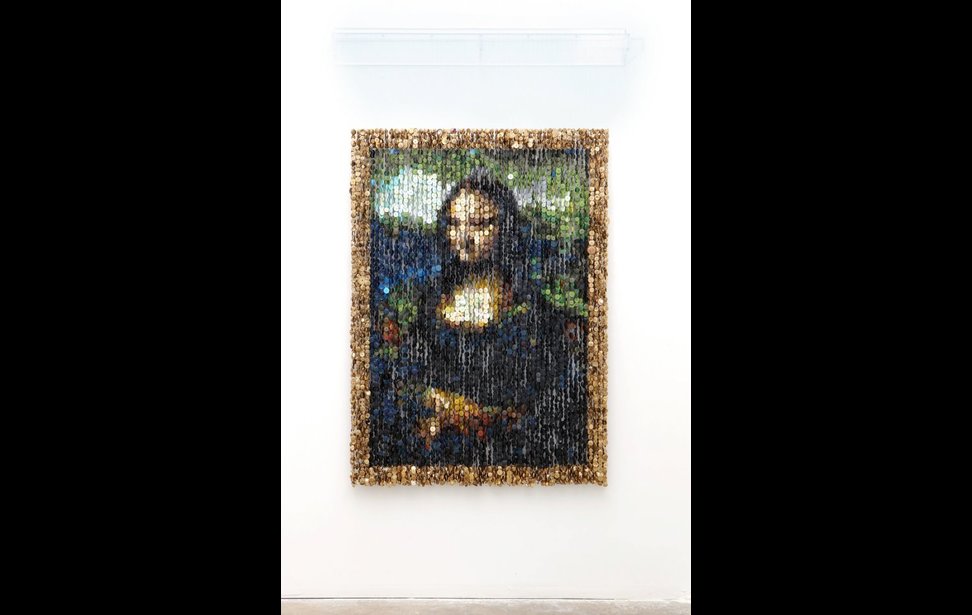 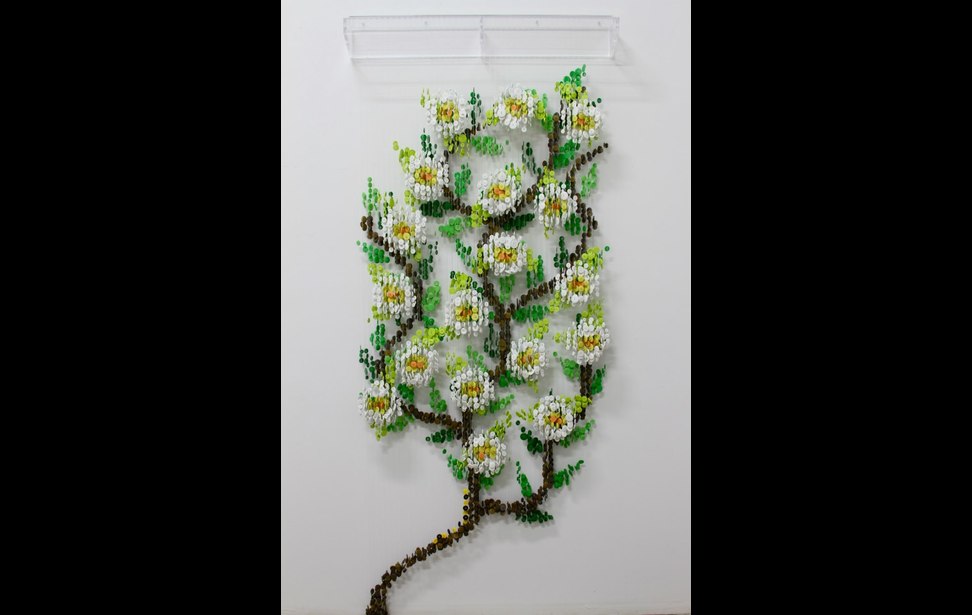 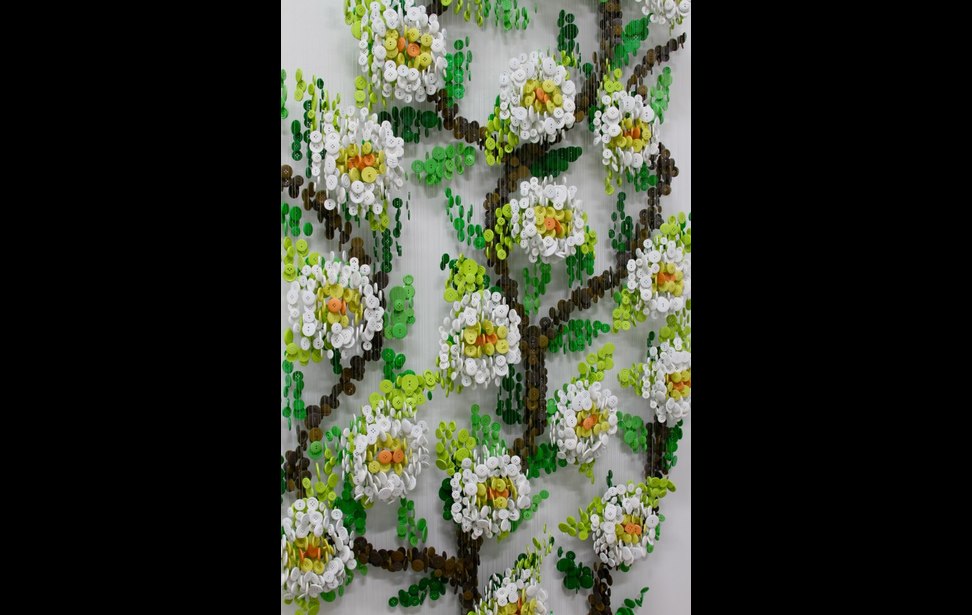 MIAMI, FL - An infinity of colors that blend into a fanciful whole and 3D sculptures which represent a plethora of intriguing objects that reflect  incredibly vivid imagination. Welcome to the multi-colored, creative and inspiring universe of buttons!   The Miami-based contemporary artist Augusto Esquivel creates marvelous art sculptures that consist of simple sewing buttons.

When you spot a sewing button on a suit or a shirt or even in a drawer, you can hardly imagine that it has the potential to turn into a powerful artistic tool. However, Augusto Esquivel has crossed the boundaries of conventional creativity and introduced a bold innovative approach to design. For the Argentinean artist, buttons are elements of creative puzzles. His projects are three-dimensional structures, each with its unique color combination.  With his extraordinary technique of attaching buttons on wires, Augusto has produced a button-made piano,  a guitar (as seen in photo 1), a fire extinguisher,  a gramophone,  a vending machine, a carrousel horse (as seen in photo 2) and many other spectacular pieces of art (as seen in photos 3 - 7).

The artist builds the structure first: he creates a special acrylic box with numerous holes from which the buttons hang.  Then he paints each button separately and dries it. After that, he uses the buttons to build complex objects of unity and precision. Typically it takes him a month or two to complete each idea. The structures look heavy and solid on the surface, but once you touch them, you’ll realize that they are light, fragile and delicate. thalo had an opportunity to speak to the artist and uncover his inspiration.

thalo: How did the idea of building 3D button sculptures first occur to you?

Augusto Esquivel: I don't remember a particular time when the idea materialized in my head.  It was more the sum of different concepts that reflected my ideology which was the starting point for creation. My goal was to try to ‘’deceive’’ the viewer with an object that looks solid and heavy on the surface when, in fact, is floating and inconsistent to the touch.

All systems work because the parts that constitute them work. If a part of a balanced system fails or overworks, the system reconfigures itself to find a new balance. This happens at different levels - from atoms to the planets in the solar system. This is how reality works and it is the same for humans and the way our own body functions.

I use the sewing button to create a balanced system (and therefore a beautiful one), surpassing the function of the object and using it to create something greater. I believe that if we as humans are able to work with one another instead of against each other, we would do unimaginable things.

th: What are your sources of inspiration?

th: Can you tell us which projects you're currently working on?

AE: Sure! I'm working on a show that is going to be presented at Now Contemporary Gallery on July 13th, 2013, in Wynwood, Miami. It is which is going to be a showcase of a series of eight sculptures: A vase with sunflowers and Roses, a cuckoo clock, a framed mirror, a map of the world, a caged Golden Fenix, etc. Please come and check it out. It is going to be amazing!

th: What new projects can we expect in the near future?

AE: I have so many ideas that sometimes I feel one life is not going to be enough! I want to do knights with armor, Dancers in midair, Instruments, statues, paintings, landscapes, cars, 8-bit images and much more!

th: What are the main ideas that you're trying to convey through your art?

Esquivel’s art proves that with the right approach and imagination, even a small practical object can turn into a fabulous art element. And he does that for the joy of all contemporary art fans.

All photos are courtesy of Augusto Esquivel