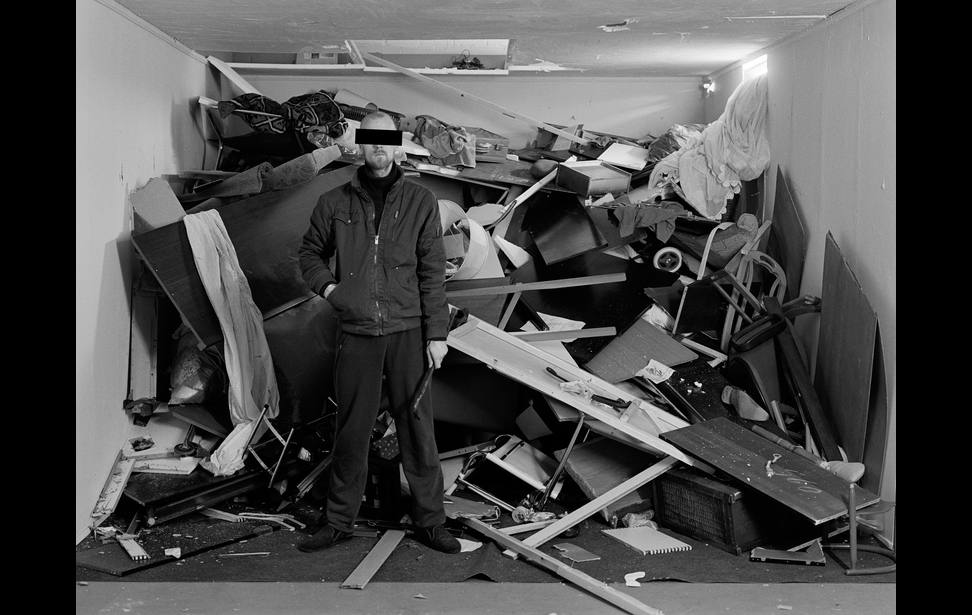 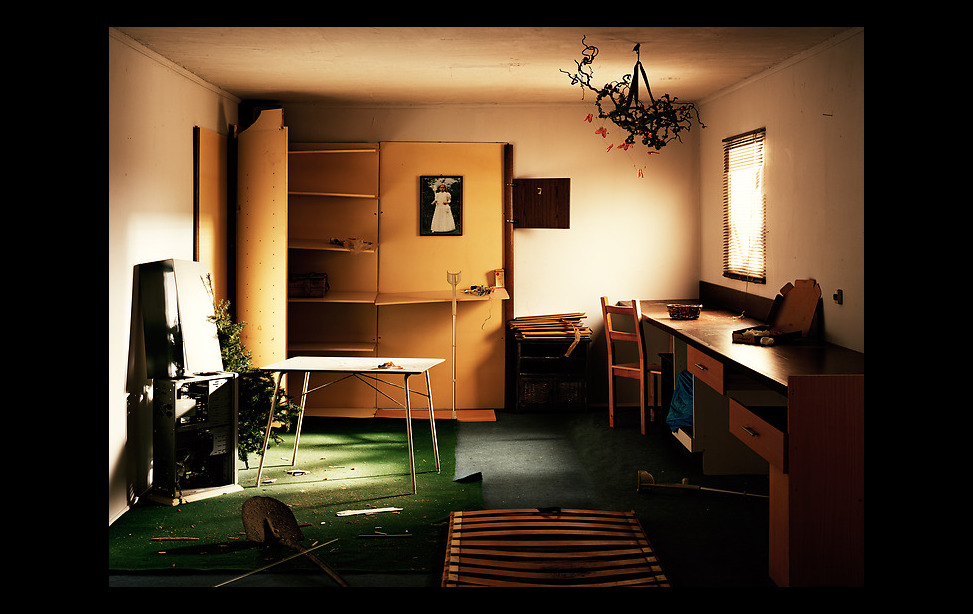 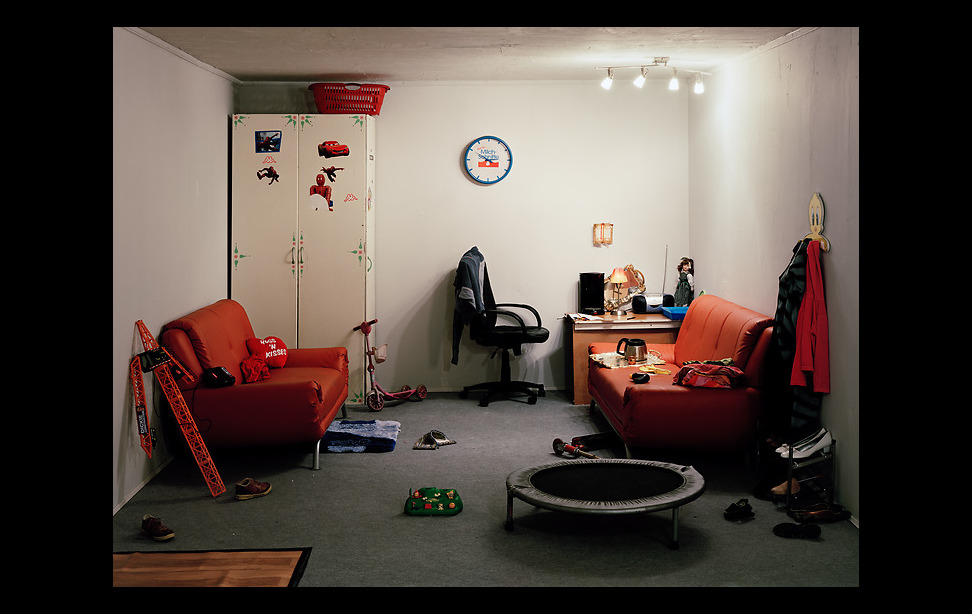 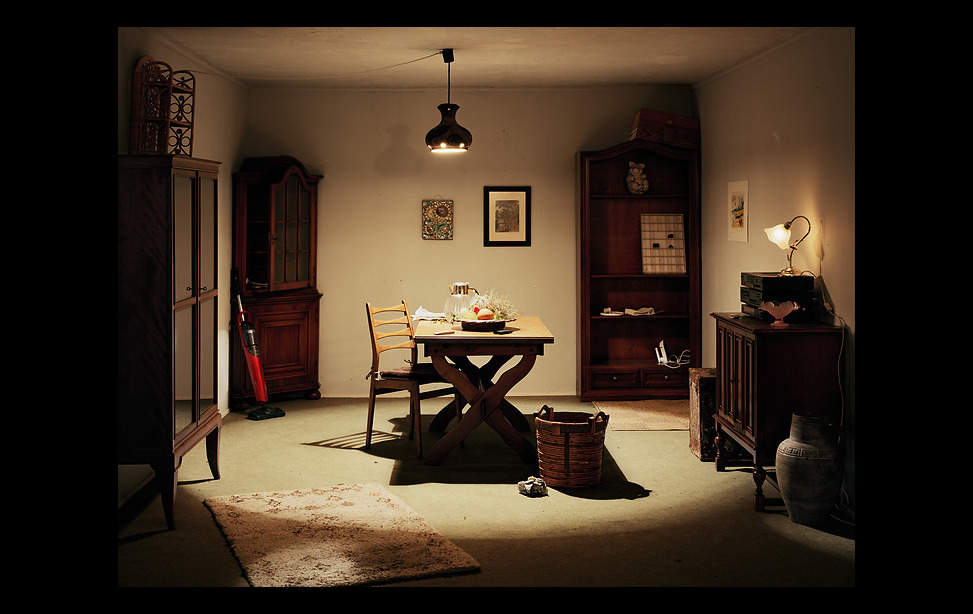 BERLIN, GERMANY -  We live in the age of mass and cheap production in which new things are bought and discarded more frequently than ever before. But luckily there are still people who take interest in and give purpose to the pieces that others abandoned.

German photographer Ralph Schulz (as seen in photo 1) spent two years gathering discarded furniture and household waste. Wandering the streets of Essen[1], he collected several tons of trash. He stored all items in his studio, reconstructed them into domestic scenes he thought they had once represented and photographed them (as seen in photos 2 - 5). They thus became both nostalgic images of possible memories and temporary art installations.

The series, which won the first prize in the portfolio review section of last Fall’s European Month of Photography in Berlin, is called Reconstruction of Unknown Interiors and was shown at the Pavlov's Dog Photography Gallery in Berlin.

thalo: What brought you to the idea for your series?

Ralph Schulz: The huge piles of trash that you often encounter in Essen have always attracted my attention. At first my interest was very practical. I was just looking for things that might still be useful and in fact found quite a few nice objects, like a bicycle or a fully functional stereo. But I noticed that certain piles of garbage seemed to form a kind of a widespread archive of someone’s life - including old pictures, letters and other very personal items. This automatically made me think about the people behind the trash and their living circumstances. At first my approach was very experimental. Would it be possible to recreate the interior or even something of the original atmosphere? Starting with the work I had no idea if it would work out at all.

th: Did all the pieces on one photo come from one pile of waste?

RS: Yes, I only used the things from one pile of waste to build one interior, since this is one of the most important aspects of this work. I'm not interested in setting up a nice looking interior out of things that I randomly found in the street. My assumption is that one pile of trash derives from one household and therefore the specific collocation of things in one pile of trash contains certain information about its former owner. The fundamental idea was to reveal this hidden information and to make it visible and tangible again.

Therefore the first thing I did when I had unloaded a new pile of trash in my studio was to take a picture of the complete pile of trash as a whole and also to take a picture of every single item to ensure things would not get mixed up with things from other piles. For every pile of trash I created a document file that contains all the images that belong to that pile. For me these files form a very important aspect of the work as they allow inspecting every single object in detail.
th: What is the main purpose of your series?

RS: It is to create an illusion of looking at a real interior and not at an insufficient model of an interior that was built up in a studio. This is something that the reconstructed setup in my studio would never be able to accomplish. Looking at photographic images we tend to believe in what we see because photography is an objective, mechanical and automatic process that reproduces reality.

th: In your gathering of discarded objects that are considered trash by others and giving them purpose again, one could also see an ethic dimension. Was that one of your objectives?

RS: Yes, I had this ethic dimension in mind. For me trash is a mirror of society. Nowadays products are designed to last only for a certain amount of time. Nobody seems to make the effort to repair something or the products are explicitly designed not to be repaired. I think this seems to have lowered our value for things in general.
Another ethic aspect is that trash seems to reveal the hidden poverty of many families. It was sad to see in what worn-out condition many of the discarded objects were. Many families do not have the financial resources to replace broken household items and are forced to live in a constant state of inadequacy.

th: Do you see beauty in trash?

RS: I would not say that I see beauty in trash in general but I think old and worn-out things have a certain aura that we seem to yearn for in times of sterile industrial production.

All photos courtesy of Ralph Schulz

[1] A city in western Germany where Ralph studied.