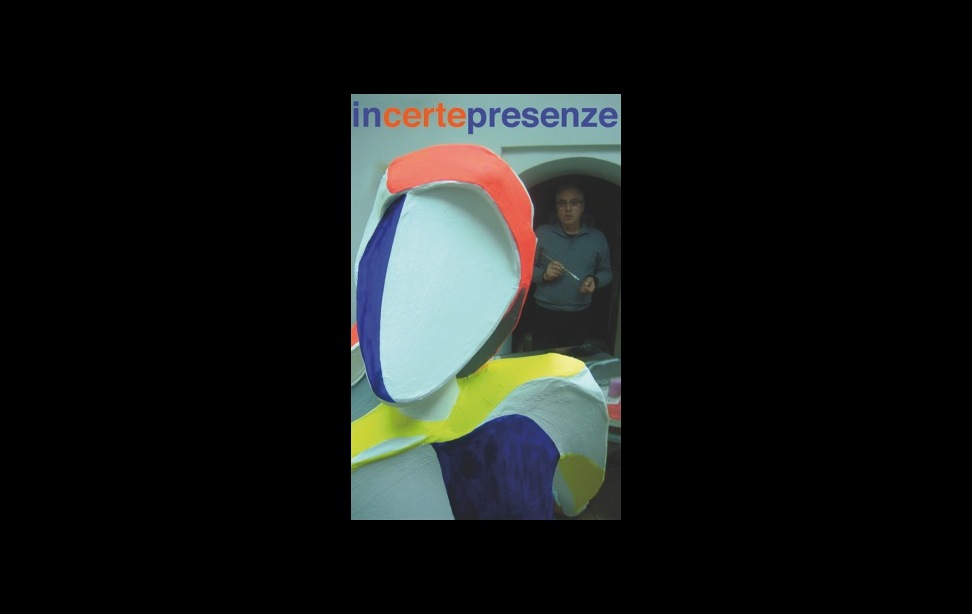 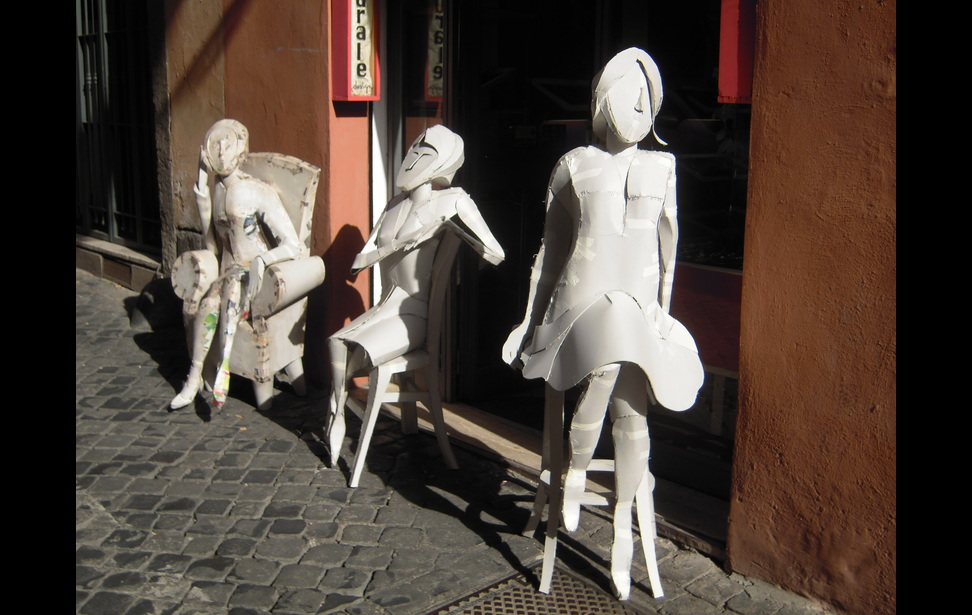 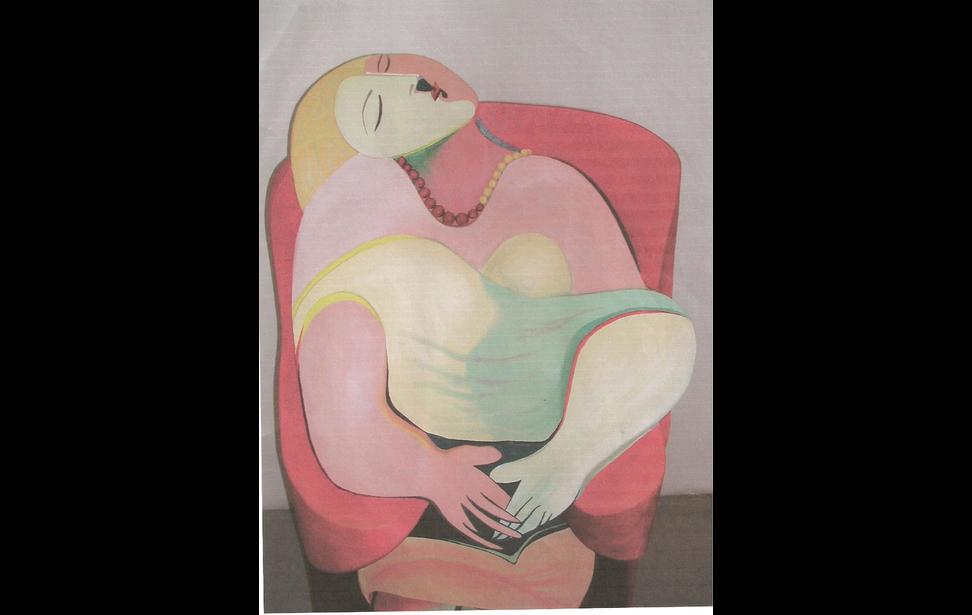 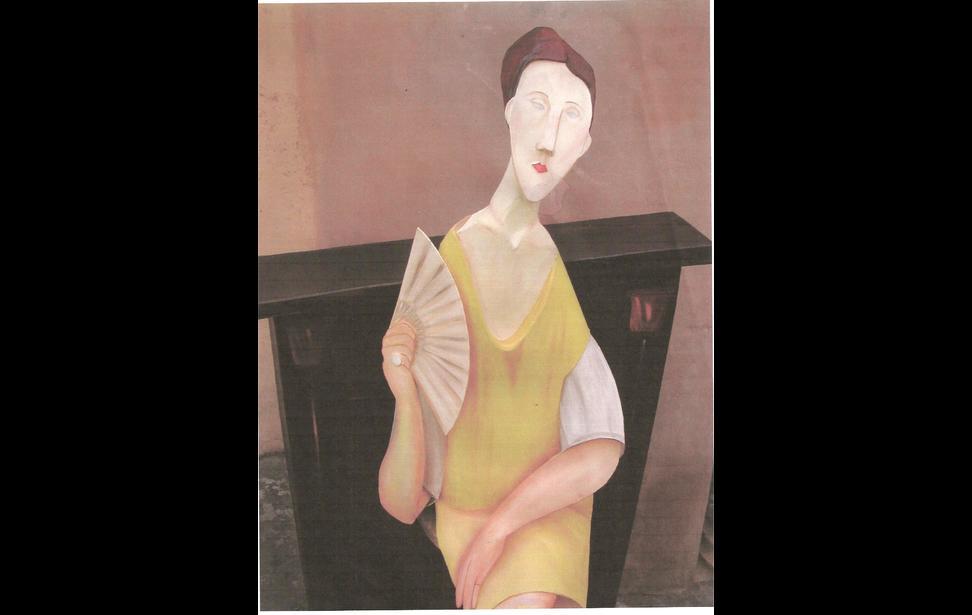 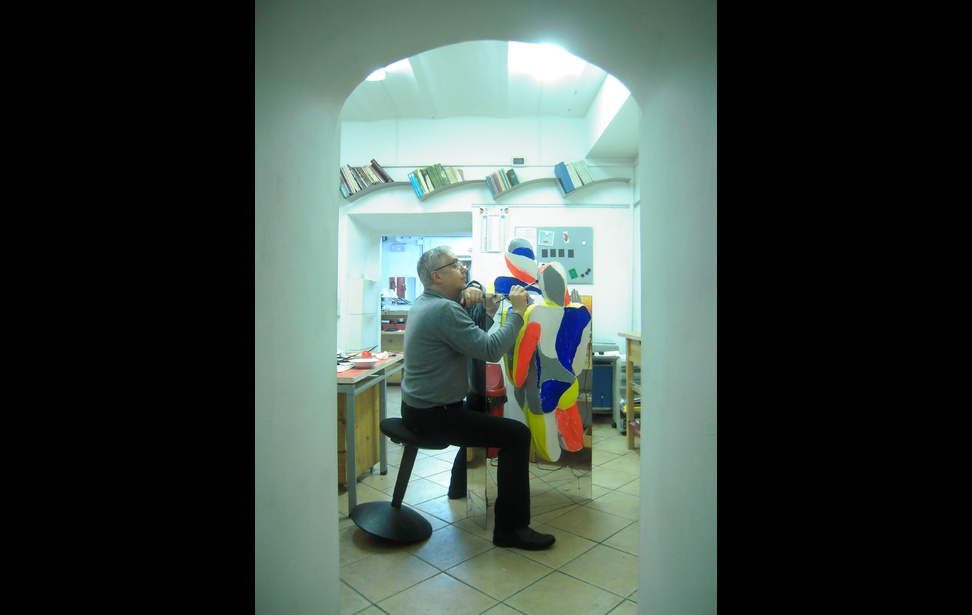 ROME, ITALY-­‐ Enigmatic, uncertain presences have made their appearance inside the temple of ‘Antoninus and Faustina’ in the Roman forum. They’re echoes of modern masterpieces, ancient myths and contemporary visions…

thalo: Who are your ‘Uncertain Presences’?

Maurizio Prenna: This is the most difficult question you can ask me! The title of the exhibition (as seen in photo 1) plays with the several meanings held within the sound of the word ‘Un-­‐certain’ (‘Incerte’ in Italian): ‘uncertain’ as ‘non-­‐ certain presences’; ‘in certain’ meaning ‘in sure presences’ and ‘in certain’ with the meaning of ‘in some presences and not in others’.

I began with making famous paintings into cardboard sculptures: the ‘uncertain presence’ of a painting that is there but is not really there anymore. And at the same time the ‘certainty’ of an image which has become solid and tangible. That has been the starting point but it wasn’t enough so I started constructing my own ‘presences’ as well (as seen in photo 2).

th: Why this desire to turn a painting into a sculpture?

MP: I’m in conflict with the conceptual tendency of contemporary art: my work has a very strong relationship with craftsmanship. Perhaps there isn’t always the need to invent anything new so I decided to remake some of the works that already exist. It’s also been a revisitation of the creative process of great masters like Modigliani, Mondrian and Picasso (as seen in photos 3 and 4), a sort of ‘rewind’ from the bi-­‐dimensional image of the painting going almost back to the three-­‐dimensionality of the model.

th: Can you describe one of your works ?

MP: A previous exhibition that I did was called ‘Absences. Matter of the Soul’. Within that exhibition I explored the idea of reflection: the image reflected in a mirror becomes absent, almost intangible. I proposed this idea again for ‘Incerte Presenze’ with a homage to Mondrian (as seen in photo 5). I made a mirrored wooden box where I depicted one of Mondrian’s paintings and then I placed two sculptures –one male the other female-­‐ on each side, in a sort of embrace. I played with the idea of introducing an anthropomorphic element to geometry, suggesting how the two are interconnected as geometry is at the core of cosmology and creation.

th: You are an architect, jeweler, designer...  What influence does this background have in your art ?

MP: The focal point of my work is construction, the materiality of art. For me that also becomes a consideration of modern society where everything has to be immediate: I feel distressed by the fact that there isn’t time for reflection anymore and I want to affirm the substance of things through the process of manual creation, which takes time. My research is about getting from the conceptualization of art back into matter. Of course my sculptures have a‘concept’ behind them but they also have their own concreteness. I want to return to a sense of true craftsmanship, of building art with one’s own hands.

All photos courtesy of Maurizio Prenna