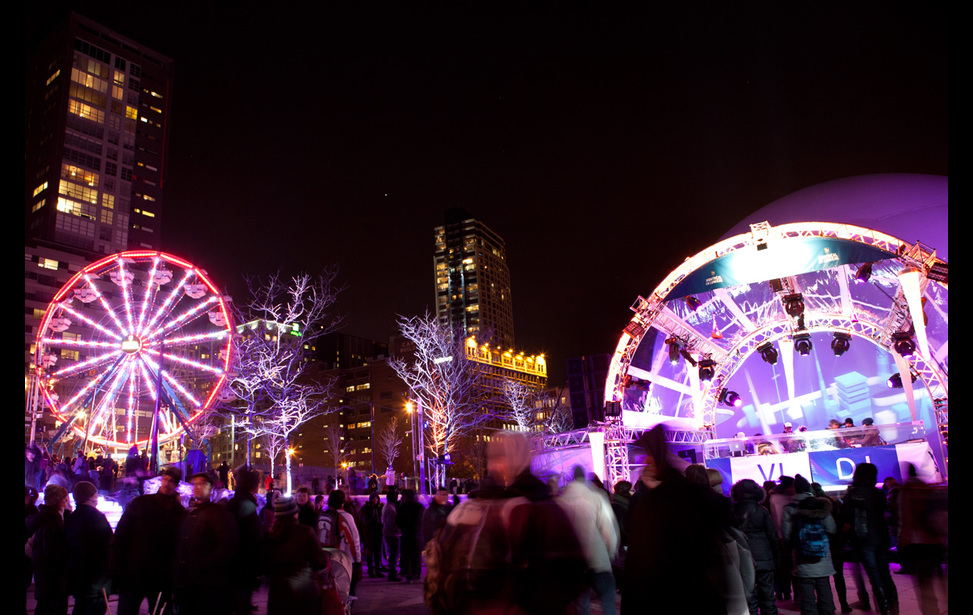 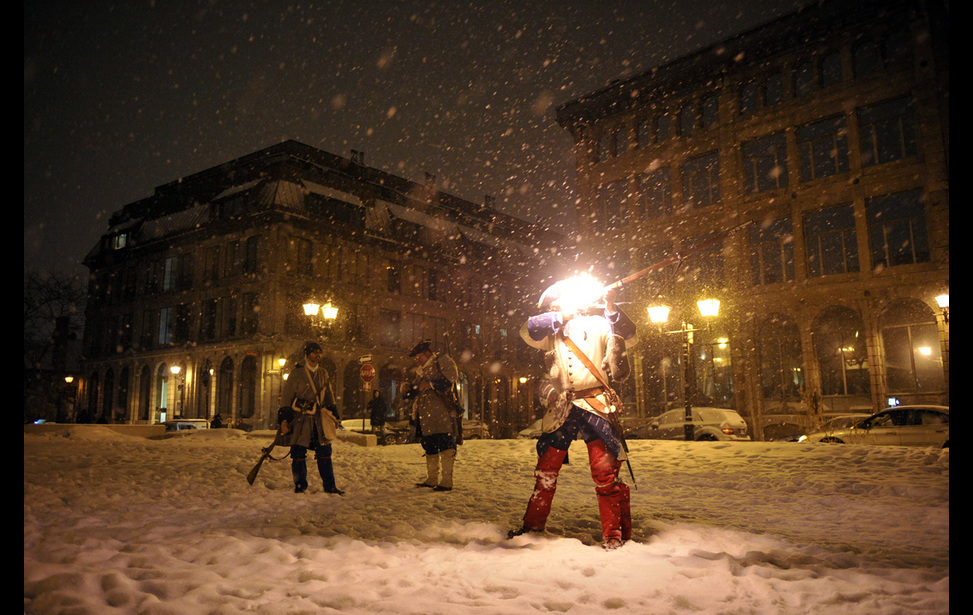 MONTREAL, QUEBEC -- Each year, at the tail end of the cold Quebec winter, the Montreal en Lumière Festival jolts the city out of its hibernation with a dazzling display of art, music and light.

Now in its 14th year, the festival sees practically the entire city—almost one million visitors—come out to brave the cold for ten days of art exhibitions, concerts, circus-type shows and family-friendly activities.

Free events take place outdoors throughout the duration of the festival at the Place des Festivals and Place des Arts, both of which are downtown and near the Musée d'art contemporain de Montreal.

Stepping out of the warm metro, the scene at the Place des Festivals is celebratory to say the least, as the entire site is illuminated in colorful lights and the beats from the DJs can be heard from across the square as thousands of revelers pack the plaza.

Snaking its way through the square is the brightly lit “Urban Slide,” a 110-meter-long outdoor slide that thrills riders with its twists, turns and synchronized light/smoke effects. The queue is around the block, but it’s definitely worth it.

During the day the Complexe Desjardins, just across from the Place des Arts, had hosted the Festival of Our Cheeses, which was dedicated to showcasing cheeses from across Quebec.

Montreal en Lumière was full of culinary treats, however, as the festival also put on special cooking workshops at the Jean Talon Market and arranged for more than two dozen high-end restaurants across the city to serve specially prepared set menus to festivalgoers.

Moving past the free events that take place outside in the cold, dozens and dozens of inspiring events compete for attention in the warmth of theaters and venues across the city.

Le Cabaret Pista Tango is one event that truly does its best to keep the audiences thrilled. As if its sultry sounds and gyrations from Buenos Aires weren’t enough, the show fuses circus arts with the tango to create a mesmerizing performance that’s both sexy and exciting (as seen in photo 2 ).

Set in the Métropolis Theatre on Rue Sainte-Catherine, the theatre’s classic and grand style further adds to the show’s appeal, as well-dressed spectators sip red wine at the bar and from the balconies above in an altogether glamorous scene.

Bringing the festival to a close is the epic Nuit Blanche, when the entire city goes without sleep to enjoy the approximately 180 (mostly free) events that are put on around the Montreal art scene. The events begin at 6pm and go on until at least 2am, with the city’s Metro system staying open 24 hours to accommodate the late-night revelers.

The events on Nuit Blanche don’t differ too greatly from the offerings during the rest of the festival, but this is a clear case of bigger is better, as the dozens of gallery exhibitions, poetry readings and arts performances bring the festival—and the winter—to a fitting close (as seen in photo 3).

This year’s incarnation of Montreal en Lumière began on February 21st and came to a close with Nuit Blanche on the morning of March 3rd. But don’t despair, as planning is already underway for next year’s edition which will run from February 20th to March 2nd 2014.

Photo 2:  Courtesy of Montreal en Lumiere – The seductive performance of the Le Pista Cabaret at the Métropolis Theatre.

Photo 3:  Courtesy of Montreal en Lumiere – A photo of “Qui Va La?”, a Nuit Blanche historical performance that follows the lives of soldiers in New France.