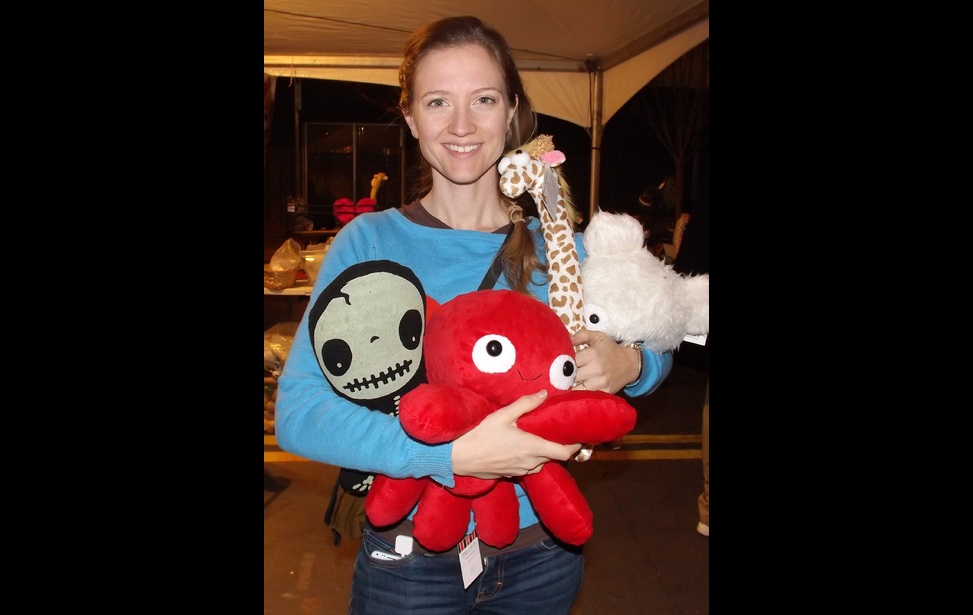 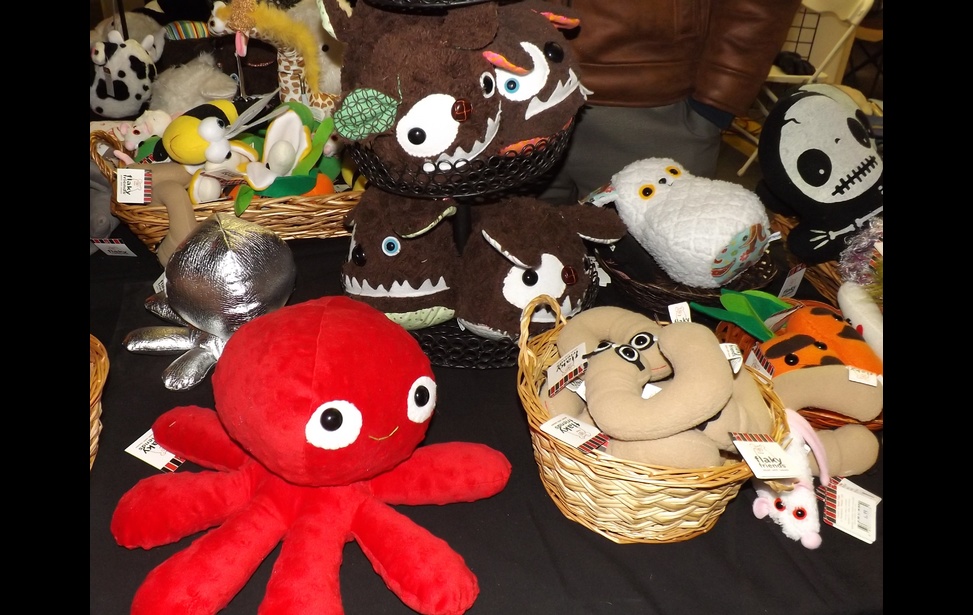 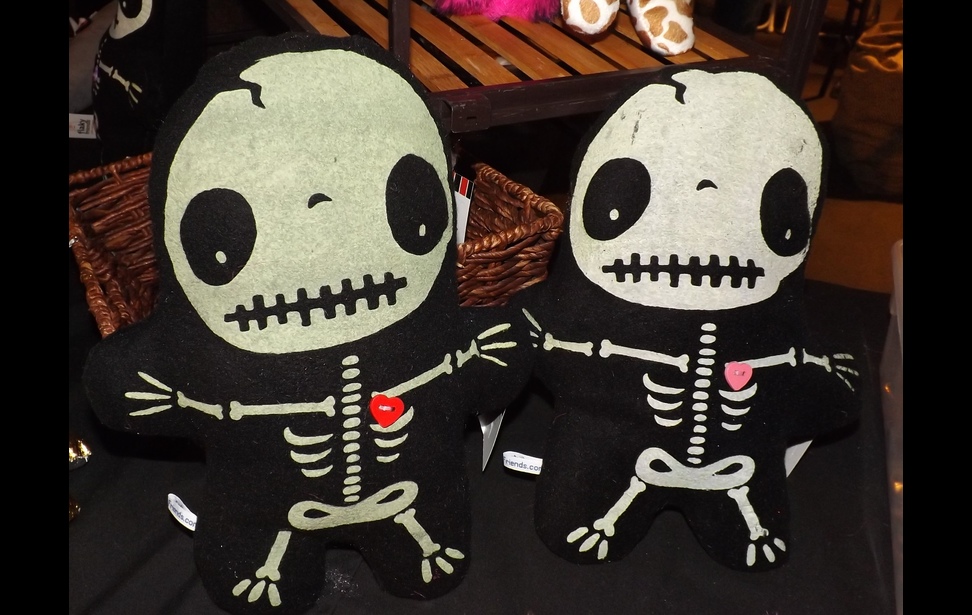 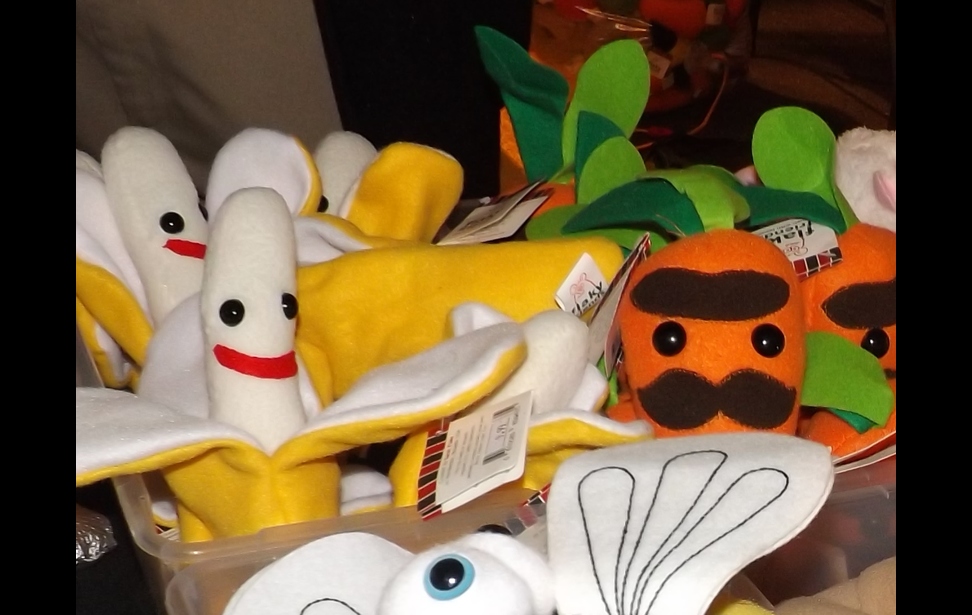 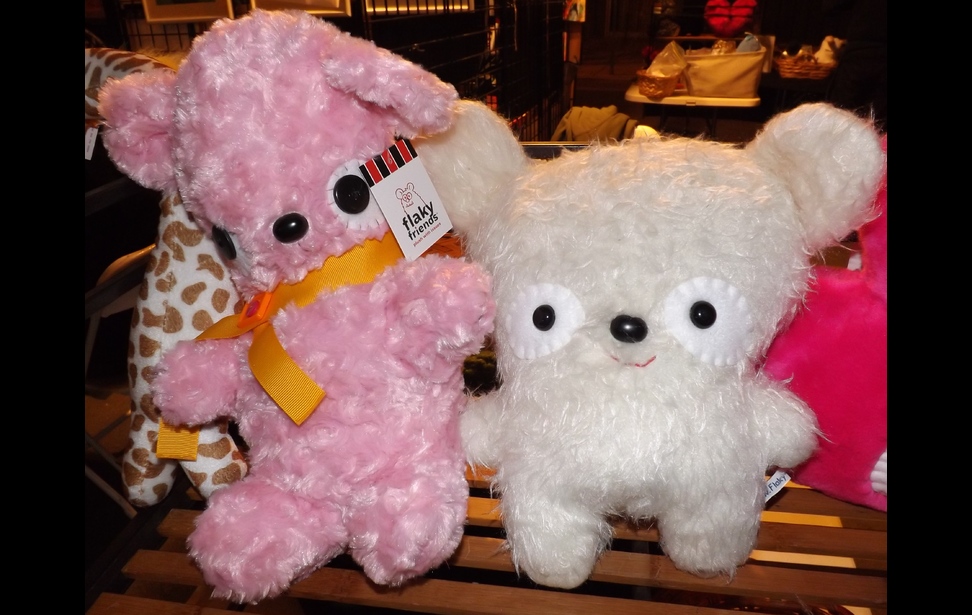 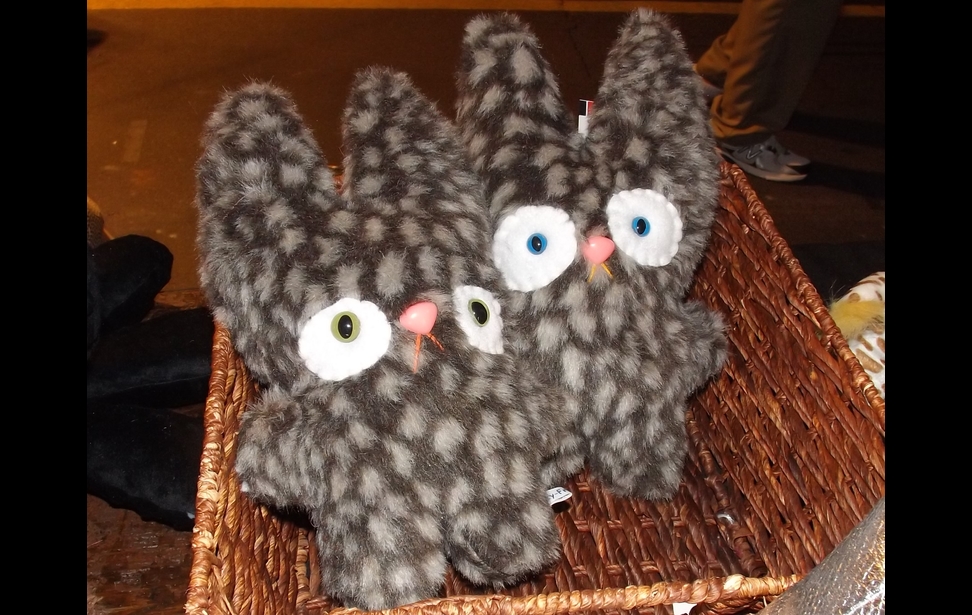 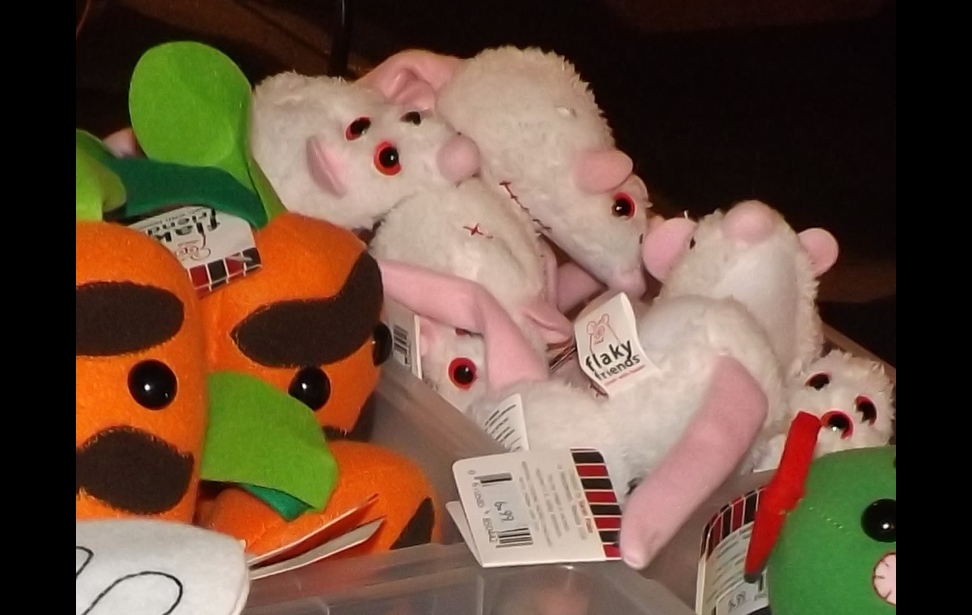 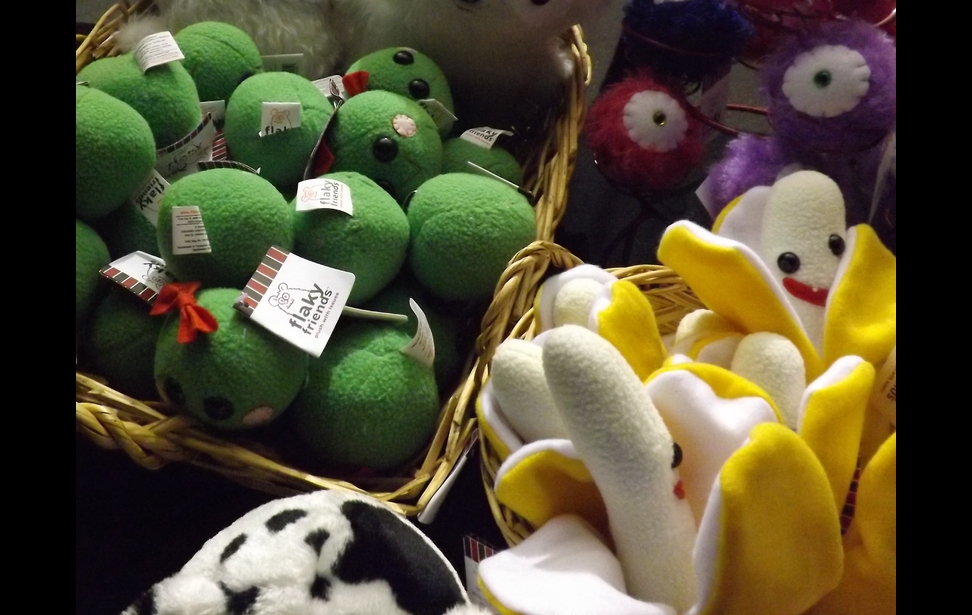 LAS VEGAS, NEVADA -- You can tell when you look at Sarah Flake’s toys that she has a sense of humor. Her whimsical line of Flaky Friends stuffed animals — each with its own funny background story printed on the tag — appeals to young and old alike, and proves that art comes in all forms.

First of all, there’s the name. After marrying a man with the last name “Flake”, Sarah (as seen in photo 1) didn’t opt to hyphenate, keep her own surname, or complain about it; instead she used it to her advantage. “I've always been a fan of the pun and have a persistent habit of making fun of my married name,” she explains. “It’s kind of a lemons-into-lemonade type thing, because it’s a pretty bummer last name,” she adds with a laugh.

When you read the stories that go with each creation, it’s not hard to believe that Flake’s background is as a humorous writer; now she focuses on her stuffed toys because it’s easier for her to fit it in with being a mother.

In fact, it’s motherhood that started this whole thing. First, Flake credits her own mom with encouraging her to hone her sewing skills. “My mother had taught me how to use a sewing machine when I was around 8 years old. She had seven daughters and made most of our dresses, blankets, curtains, pillows, decor, and more on her sewing machine tucked into her bedroom closet full of fabric. I used to love to sit in her closet in a pile of fabric listening to her sewing machine run for hours on end. I had to be really quiet otherwise I'd get a chore to do, but most days I'd risk it and creep in,” Sarah remembers.

She learned how to make quilts, skirts and shorts, but wasn’t impressed with her own handiwork and had found other passions by the time she hit her teen years.

“Fast forward 20 years, and I found myself a stay at home mom to a two year old daughter and a tiny apartment filling up with junky, generic toys,” Flake continues. It was a Christmas request for a purple pony — one that Sarah couldn’t find anywhere — that prompted her to take matters into her own hands and spark up the sewing machine again. “Since she wasn't old enough to be too discerning I bought a scrap of purple fabric and created a Frankenstein-esque conglomeration of bits, pieces and sticky-out bits until I'd created something similar to a horse,” she says in typical self-deprecating fashion. And to her young daughter, Sarah had become supermom.

That prompted a snowball reaction, and suddenly “I looked around for more scraps of fabric and started cranking out all kind of mutant, beginner creations.” Since she had a large online following for her writing, she tapped into the built-in audience to show pictures of her work.

“I didn't have patterns, but have never been one for rules and lots of people thought I was making them ugly and lop-sided on purpose. My audience either loved or hated them in very vocal ways. I had family members literally tell me, ‘Sarah, we love you, but please step away from the sewing machine,’” Flake recalls.

But the creations had taken hold of her heart, and she took the plunge into professionalism, first testing the water by putting one lopsided kitty up for sale on a free online shop. “It sold in a matter of days to a stranger on the other side of the country and I was ecstatic. Within a few months, I had almost entirely stopped writing and replaced it with sewing and developing my online shop,” she explains. “Now I was doing something that I loved, and my kids loved too! It was a really sudden transition, but I'm an all or nothing type and my heart was chock full of Flaky Friends.”

Her process was simple: start with some doodles of animals, and try to turn the simplest creatures into toys. “My basic pattern for the first ones was to make a beach ball shape, then just attach as many limbs, ears, eyes, hooves, etc. as necessary to get something similar to my sketch,” Flake explains. Then she started going into toy shops and examining other stuffed animals to figure out how the shapes, pieces and seams went together to create the final product.

Besides getting inspiration from her own doodles, Sarah tapped into her life and the lives of loved ones. After giving birth to her second daughter, she created the “Shameless Cow,” who is dwarfed by a huge udder. “The character conveyed my feeling of just being a vehicle for milk and how un-sexy my breasts had become.”

The mutated lab rat was born after a conversation with her sister, a genetic biologist, who had been talking about gene splicing and DNA testing. Sarah sent the first little rodent to her sister’s lab, and her co-workers were “simultaneously disgusted and delighted. I've since sold the little critter to mad scientists the world over who are able to laugh at themselves,” she says (as seen in photo 7).

Then there’s those background stories, which mostly relate to her own life. She jokes, “I like to sew up my baggage into my toys. When I tell someone the story, and they still want the toy, it's a strange sort of cathartic experience to be able to pass it off.”

And why so many fruits and veggies, like Monsieur Carrot, Professor Foster the banana, Pirate Captain StrARRGHberry, and adorable pals Sweet Pea and Black-Eyed Pea? (as seen in photo 8) “I like starting with a very familiar base,” Flake explains. “I typically don't make fanciful creatures, aliens or monsters since there is no starting point for a connection. But take something very familiar, like a banana. My kids love bananas. Who doesn't love bananas? They're yellow, fun to peel, and make monkeys happy. Then you put a face on it and suddenly it can love you back! I've found most people have very strong opinions about food in general, so starting with a very familiar framework makes the characters that much more identifiable.”

Flake says that Flaky Friends are designed to fill the gap “between cute and creepy.” They’re safe for kids three and up, and many have bells or squeaky bits inside; but after a few years she was surprised to discover an older audience, so now they’re mainly geared to what she affectionately calls “the ‘I-don't-want-to-grow-up-I'm-a-Toy-R-Us-Kid’ generation.”

Their popularity meant that a few years ago, Sarah was selling everything as fast as she could make them. But she was spending so much time sewing that she couldn’t pull in much of a profit, let alone find time for her family. She decided to start outsourcing the production of some popular Friends so she could concentrate on what she loved: creating the characters.

Through much trial and error, persistence, and the willingness to reach out and ask questions, she found some mentors to guide her through the process. She decided a factory in China would be ideal, but that presented a language barrier and challenges getting the right fabric, let alone figuring out how to recreate the creatures when she had no patterns.

After three strikes and settling on a fourth company, then enduring a 4-month delay to source materials — which brought the whole procedure to a year-long adventure — “I had 5,000 each of my seven most popular small characters produced and am working with DKE Toys, the largest distributor of custom vinyl and designer toys in the world, to help me roll out the line nationwide.  Just because I miss a lot, doesn't mean I'll stop swinging because there have definitely been some great hits in there.”

Finally her family, which contains several fine artists, can be proud of her accomplishments and happy about her relationship with the sewing machine.

Her sister Annie Poon  is an animator, illustrator and fine artist who is best known for stop motion animations and has one of her video animations on permanent display at the MOMA in NYC. She is also the creator of the "Oh Puppy" book and brand.

Another sister, Mary Madabushi, is the genetic biologist who inspired the lab rat — but also became an artist who paints and sketches wildlife and nature, thanks to learning how draw for her zoology and biology classes.

And her inspirational mother, Barbara Benac, is a self-taught artist who works in oil, charcoal and multiple other artistic endeavors. “She taught me that there is no reason not to try something because who knows, you might just love it!” Sarah says.

You can purchase Flaky Friends at FlakyFriends.com, at the First Friday arts festival each month in downtown Las Vegas, in Alternate Reality Comics in Las Vegas, and The Sugar Factory in the MGM, Mirage and Paris Casinos. Her distributor has also just started placing her factory edition items with retail shops around the country, so keep an eye out for Flaky Friends to invade a store near you.